Slava Polunin recalls: “Many, many years ago, I remember seeing a picture in a book. The picture made such an impression on me that I had to find out where it had been taken. Having made me enquiries, I duly took myself to Versailles. There, among the shining gilt and cascading fountains, I chanced upon a group of mysterious creatures - dressed in strange costumes, they were carrying saxophones, those most rebellious, vital and non-conformist instruments. Saxophones have done much to change the entire history of music. And here, wielding these magical tools, was a whole army, an entire population from “planet Saxophone", bringing us a whole new world of sound. Together with the bizarre surroundings of Versailles and the talented musicians with saxophones, the sounds fused to create a different reality: an enchanted kingdom, a special path - the path trodden by the French group Urban Sax and its leader, the producer and composer Gilbert Artman.

Fortunately, this was not my last encounter with the strange people and their instruments. Several years later, I saw them in Venice: they floated down one of the canals, dressed in white and playing their wonderful music. The sound was reflected off the water with a strange acoustic effect: in the light of torches, it seemed as if a group of ghosts or Martians was working some extraordinary musical contraption...

For many years, I dreamed of bringing these brilliant musicians to Russia. They seemed to me to be the very spirit of street theatre: festive, rebellious, exuberant and avant-garde.

Now, my dream has finally come true. Urban Sax agreed to visit our capital. I chose the Aquarium Gardens for this feast of music and theatre. To keep our fairytale saxophonists company, I invited one of the most interesting international contemporary dance groups from Ekaterinburg, "Provintsialniye Tantsi" (Provincial Dances). And, to keep the dancers company, I invited the Japanese choreographer from Amsterdam Shusaku Takeuchi. Shusaku takes part in virtually all our projects, and I have yet to see a creation of his which is not remarkably expressive. His work is sheer genius; everything he does takes my breath away. His very simplest ideas are unforgettable. On Terschelling Island, he had performers hurling glowing balls of fire as they walked along the shore, the audience following. The entire procession was held against a magical backdrop of sand, sea and sunset. In Hungary, a trail of enigmatic figures recalling Magritte descended an endless staircase, only to soar back up a vertical wall with Chekhov on their lips. Shusaku's characters are simultaneously simple and infinite.

Having accepted our invitation, Shusaku came to the Urals to rehearse. In Moscow, he and the dancers were joined by students from the School of Circus and Performing Arts and actors from the "Korolievsky Zhiraf’ (Royal Giraffe) theatre. Meanwhile, the decor had been taken care of by Alexei Kostroma. One of my favourite artists, Kostroma turned the Aquarium Gardens into a dreamy lunar landscape filled with floating feathers. Trees, gates, and lamp-posts - everything was covered with the softest snowy-white down. The performance promised to be spectacular. In my mind's eye, I donned a crisp and clean napkin and laid the table with meticulous care, waiting for the arrival of this most exquisite and unusual dish .’

Originally from a small provincial town, Slava Polunin spent years perfecting his art. He is now known as the "greatest clown of our time", a "modern-day Chaplin". His work is hailed among classics of 20th- century theatre. Where would we be without his "Litsedei" theatre or the eminent "Cirque du Soleil"? With his shows, festivals, master-classes, street performances and creative projects involving many international stars, Polunin has entertained thousands. The artist has always paid particular attention to the choreography and visual imagery of his shows. The Aquarium event - part of the Chekhov Theatre Festival - was no exception. Polunin's choice of St. Petersburg artist Alexei Kostroma as "stage designer" was faultless: Kostroma's artistic vision is extremely close to his own. Since 1991, Alexei's group "Tut-i-Tam" (Here and There) has engaged and entertained the public with its brilliantly innovative work. Kostroma composed his "Alexandrine Column-2", "The Emperor Peter's Shadow" and the statue of Peter the Great from thousands of balloons, whilst his mobile installation "X-Ray of the Black Square" was made up of a multitude of inflated, water-filled condoms. What would Malevich have said?

Alexei's favourite material, however, is bird feathers. The artist has been known to affix such plumage to the Mona Lisa, the St. Peter schooner, the cannon at the Peter and Paul fortress in St. Petersburg and various pieces of furniture.

The project was a resounding success; adults and children alike were filled with joy and admiration at the sight of the magical garden and its strange inhabitants. 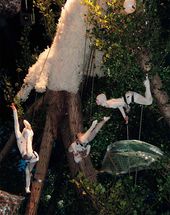 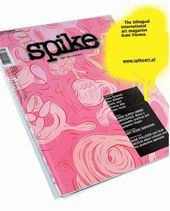