THE ВODY. Art and Science

“If anything is sacred the human body is sacred.”
Walt Whitman

The exhibition “The Body. Art and Science" proved a major attraction in Sweden this Spring, with its eternal, allembracing search for a distinctive identity finding brilliant and eye-catching realization at Stockholm’s National Fine Arts Museum. Its curators and contributors to the catalogue (published in Swedish, with an English summary) included Torsten Weimarck, Merten Snickare, Eva-Lena Bengtsson, Ove Hagelin, Mens Holst- Ekstrum, Karin Siden, Ulrika Nilsson, Eva Ehren Snickare, Solveig Julich, and Ingela Lind. The two forewords to the catalogue were written by Solfrid Soederlind and Jan Lindsten. Generous contributions from museums and private collections from the Netherlands, Germany, Russia, Great Britain, France, Poland and Denmark to the exhibition made the result a major international project.

The Artist Sketching a Woman. 1538
Woodcut from Albrecht Durer

The human body was, is and always will be at the centre of attention for both art and science; it is the point where all paths meet, both asking questions and finding answers. The human body inspires and disgusts, it is idealized and distorted, exhibited and hidden, exteriorized and interiorized, yet remains the "terra incognita” to which all roads lead.

The idea of combining art and science in one exhibition project was a real success, since not only hundreds of years ago but also today science (and especially medicine) and art remain united in the attempt "to understand the body”.

The Stockholm National museum showed the fascinating results of various Renaissance studies. The Renaissance man - an artist or a man of medicine - was not satisfied with a purely ideal or proportional approach to the human body. The need to gain an impression more significant than "what-the-eye-sees” led both artists and scientists to the idea of "using” death in order to study life and the living. In this, joint efforts were needed, since at that time no means of any long-term fixation of images existed. Thus, either a scientist needed to be a good artist, or an artist needed to be present and make drawings at the dissection table.

The very right to dissect a dead body was a breakthrough against the position of the Church, one which once achieved has continued to the present day as a source of scientific knowledge and artistic qualification, since it enabled the realization of the complex mechanisms of the action of the human body. Results included drawings by Leonardo da Vinci from Britain's Royal collection, as well as his "Homo ad Quadratum et ad Circulum” from the Louvre; and the engravings by the anatomist Andreas Vesalius from the Hagstromer Medico-Historical Library. Both these outstanding figures provide a starting point from which to view the results of 500 years of cooperation between artists and physicians to depict, visualize, acquire knowledge of and cure the human body. As the curators state: "Penetration, excoriation, illumination of the human body (subsequently perfected with the help of X-rays and other techniques) probably constitutes the greatest, most variegated and singly most important project in Western culture from the Renaissance onwards.”

The artistic component of the exhibition is supported by the scientific: Camera Obscura and Camera Lucida added accuracy to the process of drawing. As Leonardo da Vinci wrote of Camera Obscura: "Who would believe that so small a space could contain the image of all the universe? O mighty process!” (On a contemporary note, the artist Abelardo Morell uses Camera Obscura in his photographs. One can see his upside-down houses, both strange and delightful, at the Art Institute of Chicago, at the exhibition "A View with a Room”). X-ray apparatus, computer diagnosis with colour picture on a computer screen, and other effects have opened another horizon to contemporary artists. 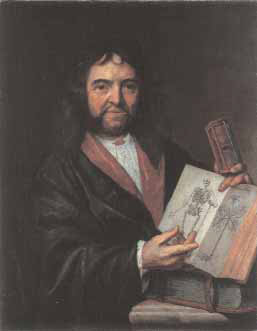 Attributed to Kaspar Kenckel. Portrait of Olof Rudbeck the Elder. 1687
Oil on canvas. 87 by 67 cm

The informational and educational effect of the exhibition cannot be overestimated. Natural human curiosity and aesthetic attitudes are satisfied equally: within the exhibition space the viewer's attention switches from medical atlases to better- known (and formerly seen in museum settings) classical paintings and sculptures, following almost all the stages of the development of art and medical science. Death and autopsy become both a point of departure and a starting point to derive knowledge and to study life. The Stockholm exhibition presents a wide spectrum of scientific heritage. Here one can see the incunabula "De Humani Corporis Fabrica Libri Septem” of Andreas Vesalius which later inspired Charles Baudelaire to include in his "Fleurs du Mal” ("Flowers of Evil”) the verse "Le Squelette Laboureur” ("Skeleton with a Spade”):

"In the anatomical plates
That lie about on dusty quais
Where many cadaverous books
Sleep like an ancient mummy,
"Engravings to which the staidness
And knowledge of some old artist
Have communicated beauty,
Although the subject is gloomy,
"One sees, and it makes more complete
These mysteries full of horror,
Skinless bodies and skeletons,
Spading as if they were farmhands."

The books of other anatomists, such as Val Verde and Eustachius, and the artist Pietro da Cortona, whose anatomical atlas was published in 1741, are presented alongside masterpieces of visual art, some of them depicting outstanding men of medicine. These include Adrien Baker's "The Anatomy Lesson of Dr. Frederick Ruysch”, from 1670 and in the collection of the Amsterdams Historisch Museum, and the would-be-or-not "chef-d'oeuvres” - products of sophisticated projects by contemporary artists who use their own body as a means of artistic self-expression, context and subject matter. Thus Mona Hatoum participated with her video installation "Corps Etranger”, from 1994, which makes the viewer travel into the insides of the artist's body to follow an endoscopy examination - such an installation being a real combination of art and medicine. Her other installation, "Exodus”, comprises two separate suitcases linked by hair - a very impressive dramatic and, no doubt, polysemantic image in which the artist uses ready made and naturally-made elements. Another contemporary participant Jouni Partaten made in pencil a suite of very fine drawings of the penis; Marina Abramovich was "Freeing the Body” - her own body in one of the numerous performances. "Real”, in other words traditional art was presented too; among the best, a brilliant marble sculpture by Louise Bourgeois, a matriarch of contemporary art.

The ideal (artistic), the real (scientific), and the hardly possible (anomalies and pathologies) are combined in the halls of the Nationalmuseum, and produce a very varied effect on the public. And though the exhibition is organized thematically, the impatient viewer may switch his or her attention from the idealized beauties of Sandro Botticelli or Johan Tobias Sergel to a wax figure of an embryo, from the "Venus Cythereia” of Jan Massys to Jeanne Dunning's "The Blob II”, or from Frederick Ruysch's preparations of the parts of human body to Jan van Neck's painting "Anatomy Lesson with Dr. Frederick Ruysch Dissecting the Corpse of a Child” ... This double - or even triple - reaction no doubt leads to a certain confusion in the viewer's emotional state, as fear and pleasure, curiosity and discomfort, surprise and indifference are mixed in the observer's mind and soul like juice and spirits in a cocktail. The confusion reaches an extreme when viewers are forced to ask themselves whether the impression matches that of an anatomical theatre or a Fine Arts Museum ...

Perhaps the only figures who seem not to be confused are the artists themselves: despite modern technologies, including photography and X-rays, newcomers to art schools are still making anatomical sketches of human skeletons and crania. Some such brilliant studies and sketches are also exhibited (for example, Lena Cronqvist's "Skeleton Torso”).

The Stockholm exhibition enables the viewer to compare the old (classical) and the new (contemporary), as well as the new and the newest (actual). And here the unexpected juxtaposition provokes a stimulus, effectively asking how should we regard the bold artistic attempts of contemporary artists, which are sometimes almost too intimate to look at, turning the viewer or spectator into a spy. Mona Hatoum is not the only figure in the field of "actual” art who uses her own body as experimental material. The French artist Orlan experiments literally with plastic surgery, her message being: "Beauty can take appearances that are not considered beautiful ... My problem was never to become more beautiful, but different ..."

This exhibition, although devoted to a certain - to some extent - limited theme, nevertheless provides considerable and invaluable data to speculate on the roots of the development of contemporary art in general. The juxtaposition of the classical and actual has brought to reality an urgent and topical question: What is art today? One answer might be that "actual" art is not the exclusive actual art. Such a term, "actual", means appealing to the humane, and not only using and applying the achievements of science, information and communication technologies, or installations and happenings. Both the so-called "traditional" Marc Quinn and Louise Bourgeois are no less actual than Orlan or Mona Hatoum. Contemporary artists working in traditional manners with the depiction of the human face and body are certainly actual, and some of them - who knows which indeed? - will be in time called "classics", just as the very notion of the "classical" might refer not only to the art of a glorious past, but to a mark of quality in art.

One thing is clear: beautiful or ugly, normal or abnormal, young or old, live or dead - the human body will remain a target- subject for art and science forever. The exhibition at the Stockholm National Fine Arts Museum represents a superb landmark on the eternal route of travel in search of human - and humankind's - bodily identity. 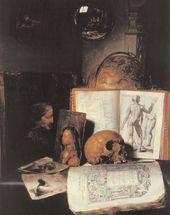 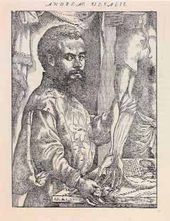 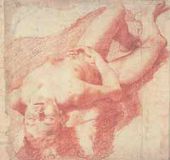 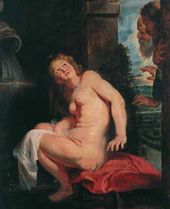 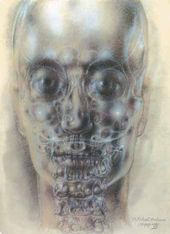 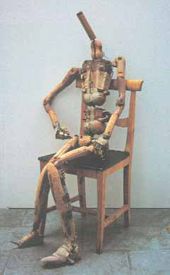 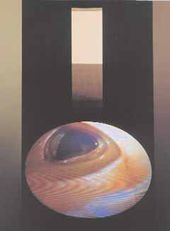 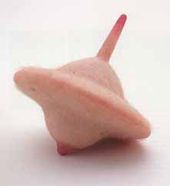 Per WIZEN. Spinning Top. 1998
Sculpture in wax and hairос 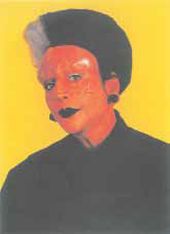