“Why look for another like her? Moscow stands unmatched...” THE CITY AND THE PEOPLE. MOSCOW IN 20TH CENTURY GRAPHIC ARTS

I. The Many Faces of Moscow

“Why look for another like her? Moscow stands unmatched...’’ These words, chosen for the title of a memoir by the 19th century architect Vladimir Bakarev, remain a fitting expression of the Russian capital's enduring appeal.[1] Today, drastic changes in the way the city looks leave some excited, others outraged, but no one indifferent. Moscow has always attracted both painters and graphic artists, who have chosen the city as their subject.

It is precisely the immediacy of graphic art that has been vital in recording the city's transformation – startlingly destructive or wonderfully beneficial - throughout the 20th century. This transformation in the way that several generations of graphic artists have seen Moscow provided the subject for the exhibition “The City and the People. Moscow in 20th Century Graphic Arts" at the Tretyakov Gallery on Krymsky Val at the end of 2017.

A century ago, as a result of the Russian Revolution of 1917, Moscow regained its status as the capital of Russia. These events, however, did not create many opportunities for positive change, and the city emerged dilapidated, dirty and dreadfully overpopulated. Nevertheless, in the middle of all the sordidness and endless turmoil, the surviving historical buildings and sites loomed over the city in their incorruptible beauty and grandeur, offering an exhausted population a semblance of hope and joy. Moscow's artists, both painters (Aristarkh Lentulov, Alexander Kuprin) and graphic artists (Vladimir Favorsky, Alexei Kravchenko), aspired to preserve the city's beauty, if only in their works.

New buildings, which on rare occasions changed Moscow's cityscape during those early Soviet years, immediately appeared in numerous works of art; the Shukhov Radio Tower (designed in 1922 by the renowned architect Vladimir Shukhov) and especially the Lenin Mausoleum (1924-1929) are good examples. In a series of drawings, Kravchenko, Favorsky and Mikhail Matorin recorded various stages in the construction of these groundbreaking structures.

Due to its very nature, graphic art is closer to everyday life than other forms of art, so it is not surprising that it concerns itself with more than the eternal and the beautiful, or new (and therefore exciting) phenomena. As much as possible, Soviet graphic artists, when depicting Moscow, shared the burdens and quotidian cares of Muscovites, and created artworks with a strong emotional force of compassion and empathy (indeed, compassion had always been an important element in the Russian cultural tradition). Take Nikolai Chernyshev's drawings of Old Moscow's frozen and deserted irregular streets, with their distinctive low houses, which had once been cozy but now stared into the hopeless, cold landscape of War Communism through gaping broken windows. No doubt enthusiastic about the romantic notion of the “city of the future" and used his art to convey his amazement at new, much faster means of public transportation such as cars, trams and buses. 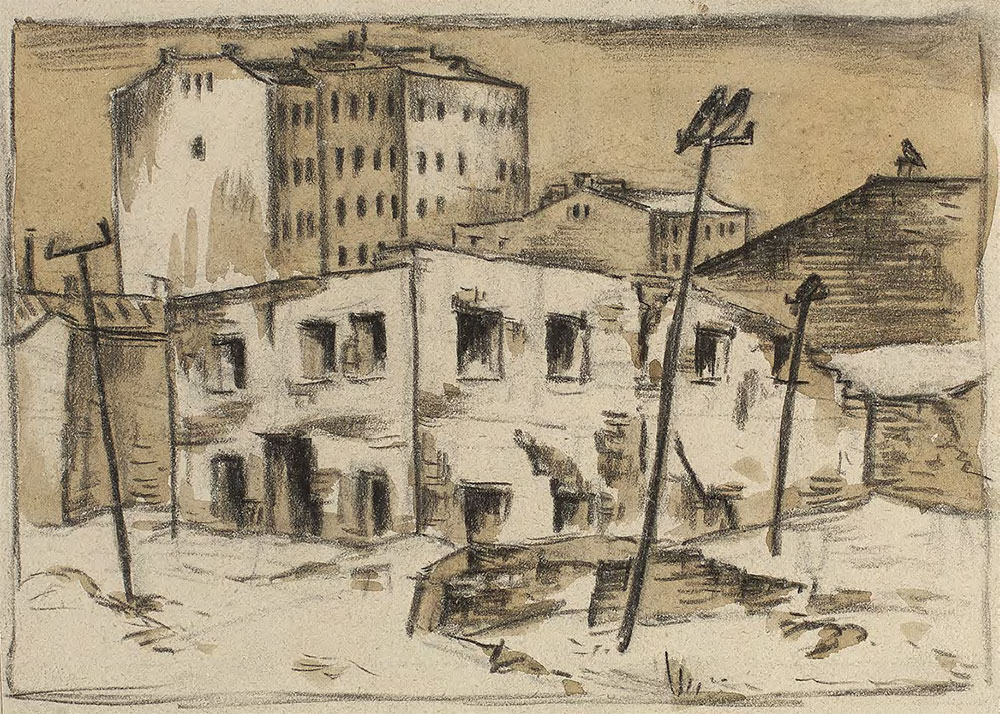 When aeronautics gained popularity in the 1930s, Muscovites flocked to parachute jump towers for entertainment. The first such tower was built in 1930 in the Central Park of Culture and Leisure, followed by others in practically every large park in Moscow. Their romantic and joyful atmosphere is expressed in Tatyana Lebedeva's watercolour “By the Parachute Tower" (1932), with the tower and the Ferris wheel brightly lit against a dark background. Indeed, Moscow's new Central Park of Culture and Leisure (named in 1932 after the writer Maxim Gorky, and known since as Gorky Park) attracted considerable attention. Gorky Park was the first outdoor “cultural enterprise" space of its kind in the world, but it was not its political or social value that attracted Moscow's artists, rather the joyful, happy motifs that it called to mind, with an attendant sense of something that was definitely in short supply in the everyday life of the Soviet people.

Moscow's first metro line, under construction at the same time, also became a popular subject for artists, who saw it as a symbol of creating a perfectly new and different world. Boris Zenkevich's drawings were dedicated to the astonishing hard work that transformed the world beneath the city. With guarded curiosity, a somewhat sombre crowd watches this new underground world emerge as a supposed model for their future “above-ground" life as the “the ideological triumph of Socialism".

In the autumn of 1941 Moscow became a front-line city that looked different and rather strange. Elaborate concealment strategies and blackouts were put in place to disorient enemy aircraft. Buildings, factories and streets were covered with layers of camouflage netting, with barrage balloons widely used to protect the city, their shapes adding to its unwonted new appearance. Some areas were camouflaged to look like highways, while real roads were painted to look like rooftops. Regardless of such measures, by the following summer bombs were exploding in the streets of Moscow, killing its residents and destroying buildings. Very few artists (among them Valery Alfeevsky) made drawings of these terrible events; for obvious reasons, they chose not to make their work public. Instead, artists were officially encouraged to showcase Muscovites' determination to defend their beloved city: one famous example, a graphic version of Konstantin Yuon's “Military Parade on Red Square, November 7 1941", was shown at the Tretyakov Gallery exhibition.

The renowned graphic artist Ilya Sokolov also dedicated many of his works to the defence of Moscow. He drew barrage balloons, tank columns, military equipment and aircraft hovering over Moscow's main streets; however, his focus was not on the realities of war, but on its various seemingly inconsequential details. A good example is Sokolov's print “To the West!", which depicts a tank column heading westwards: its foreground depicts the statue of a young woman on top of a corner tower. The figure's dress is flowing in the wind, her arm outstretched, grabbing the viewer's attention: she reminds the viewer of the ancient goddesses of victory, and the airplanes in the picture seem to salute her as they fly to the front.[2] 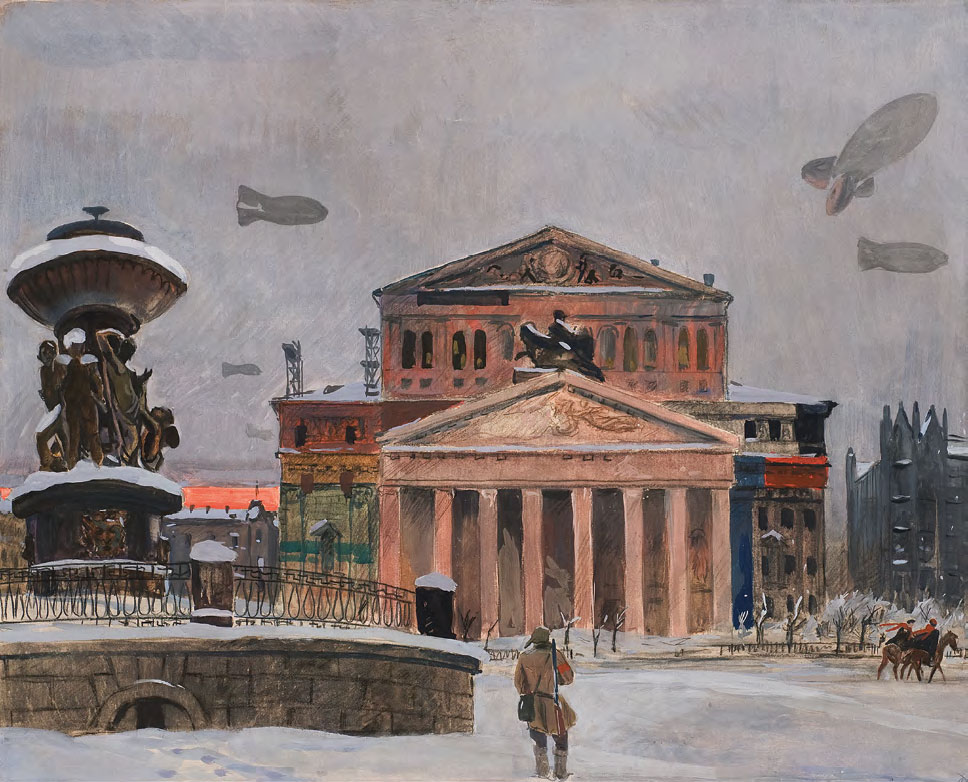 Alexander Deineka created his graphic series “Moscow in Wartime" in 1946-1947 - by then the war was over, and he based his work on his recollections. A special feeling runs through this series, serving as it does as an enduring memory of the city's mood: there is a combination of grave concern for the future of the artist's city and homeland, alongside a firm, unwavering belief in eventual victory. His “Sverdlov Square, December 1941" gives a realistic picture of what late 1941 was like in wartime Moscow: lowered lighting, people dressed in military greatcoats, and the motionless barrage balloons in the sky over the Bolshoi Theatre. Yet the setting sun illuminates the sky and shines light on the massive columns of the historic theatre's fagade; the artist and the viewer alike are filled with confidence in the coming victory.

Similar thoughts, along with a desperate fear of losing the city that had become her home, made Tatyana Mavrina adopt a range of unorthodox drawing techniques. During wartime, it was not safe go out with a sketch board or a large album and draw the city: there was the risk of being mistaken for a spy. For that reason, as she recalled later, Mavrina “sketched stealthily, sometimes in [her] coat pocket, or hiding in hallways; memorized [what she saw] and painted at home on small sheets of greyish-blue paper."[3] These sketches yielded such vibrant, happy watercolours of almost heavenly beauty that it is virtually impossible to guess that they were created in wartime. 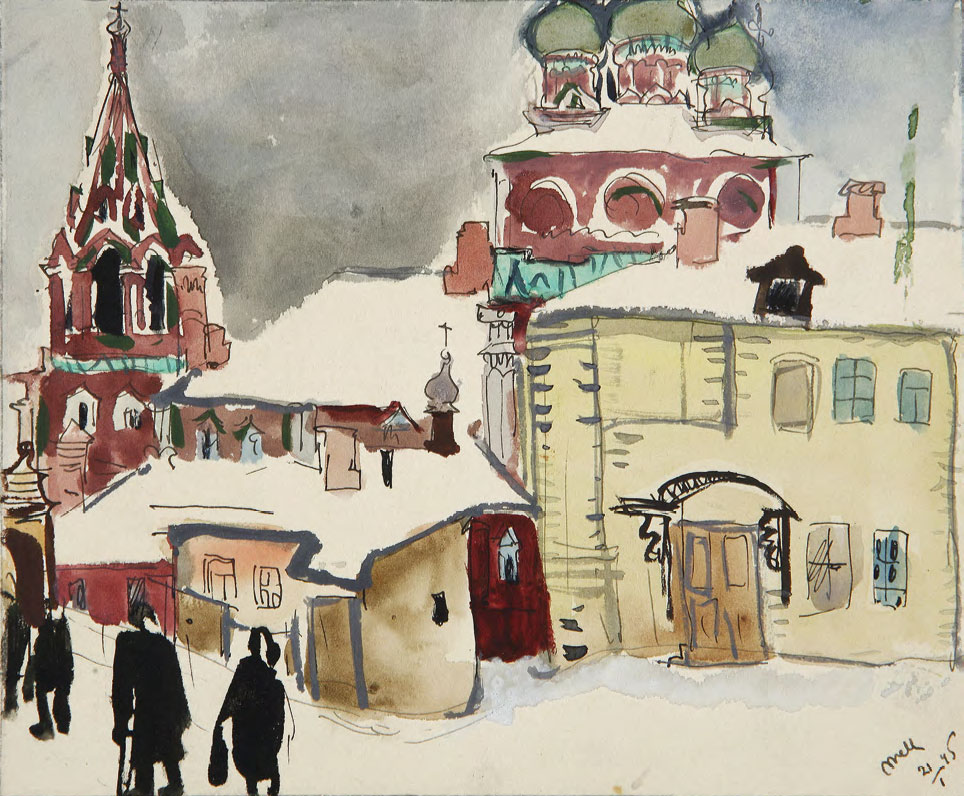 III. The Best City on Earth

Drawings and watercolours of post-war Moscow are permeated with a distinct feeling of well-being and warmth that was reminiscent of the “Old Times" and fuelled by the subdued joy of finally living in peace after the terrible hardships of war. With exceptional clarity, people appreciated what was enduring and important about life, those essentials that had had to be set aside through years of privation. Thus, it was with equal delight that Boris Chernyshev drew the magical winter twilight on Volkhonka, one of Moscow's oldest streets, and the triumphant, massive Ivan the Great Bell Tower of the Kremlin - looming over a narrow lane, it seems to vanish into the weightless Moscow fog. As for the iconic images of Moscow's crowded and always colourful streets, quiet alleys and little courtyards, they offered consolation and joy to many artists and viewers alike. 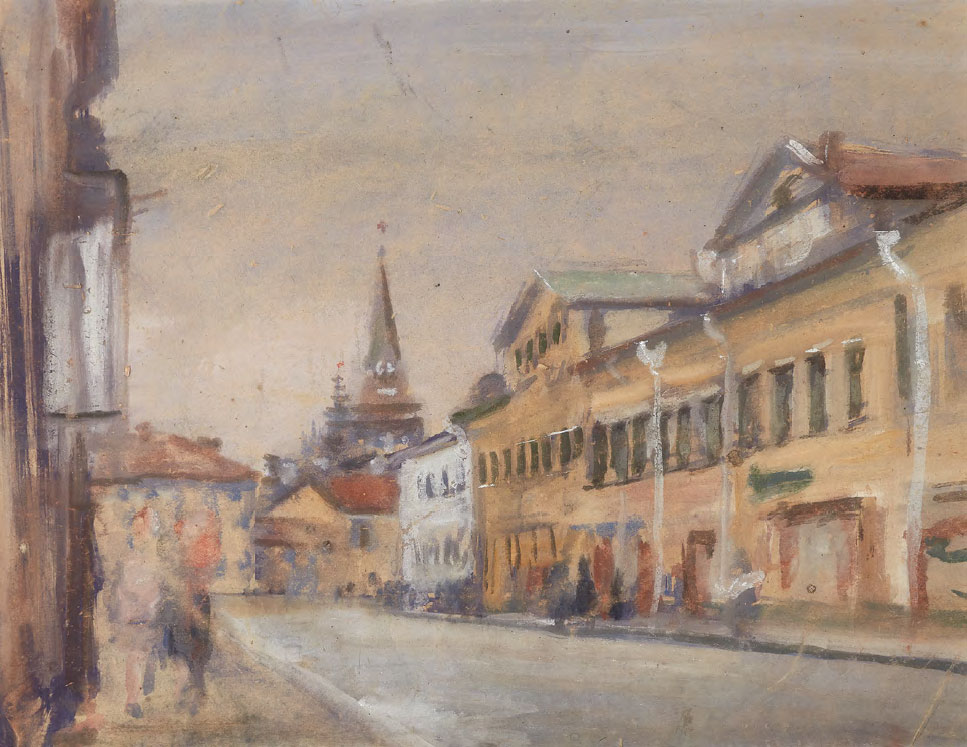 The so-called “Thaw" of the 1960s, a time of relative openness and cultural liberalization in the Soviet Union, once again changed the public's perception of Moscow as it was then. Both seasoned artists, such as Solomon Nikri- tin, and those of the younger generation (Gury Zakharov and German Cheremushkin among them) turned their attention to the images of the renewed, sweeping city, its wide avenues, stadiums, modern cinemas, and masses of enthusiastic citizens hungry for change. It felt like Moscow was to be viewed through a wide-angle lens - indeed, that was the time when the city began its unrelenting expansion, though this did not yet arouse public rejection on a mass scale. The present and future seemed perfectly clear, fresh and new. Yevgeny Yevtushenko, one of the most significant poets of the time, described the mood: “I wander around in the capital's crowd, above the merry April waters, ridiculously irrational, unforgivably young!"[4] 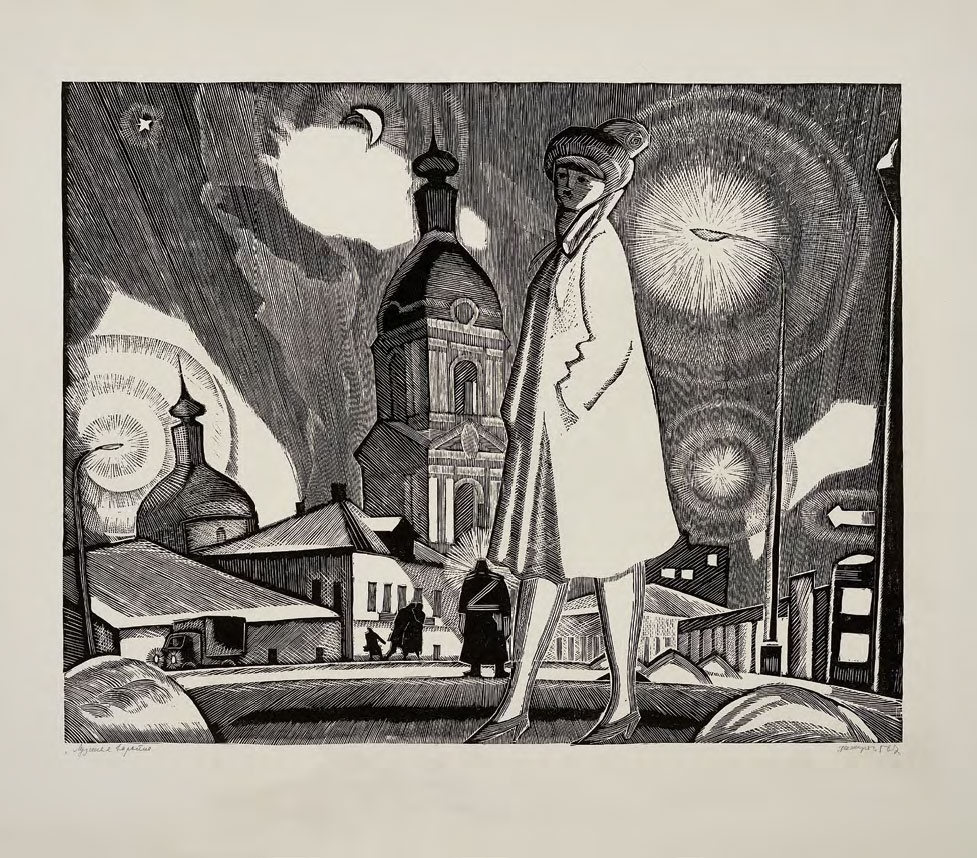 In some prints - especially in Gury Zakharov's large- scale linocuts, where he applied multidirectional but uninterrupted hatching - the city appeared to be joined to another world above it, one that poured a powerful stream of energy onto its streets. Occasionally, this energy was depicted as not one, but several luminous objects quite close to the city's streets; sometimes, the rays of light emanated from people, symbolizing the approaching “victory over the Sun", the ultimate aspiration of the avant-garde artists of the early 20th century, one that seemed quite feasible at the beginning of the era of space exploration.

By the end of the 1960s the euphoria brought about by the “Thaw" was receding. “The Best City on Earth" was gradually turning into a conglomerate of various separate territories that had very little in common. (Today, this transformation still continues, but at an even faster pace.) Artists were no longer interested in Moscow as a whole, a major living city, but nevertheless images of Moscow crowds did occasionally make an appearance in their works, such as Viktor Vakidin's famous lithograph. However, he does not show us these masses of people in the streets or squares of the city, but at an art show at the Manege, Moscow's main exhibition hall at the time. Indeed, the people's growing interest in art exhibitions, libraries, theatre productions and concerts became a hallmark of the 1960s. Vladimir Weisberg, Valery Alfeevsky and Alexander Maximov turned to drawing Moscow's small streets and their inhabitants, as people hurried to a late show at the cinema, or slowly returned home late, the surrounding boulevards and courtyards deserted.

One of the last “cumulative" images of Moscow in the 1980s was created by Boris Rybchenkov, an elderly People's Artist of Russia, in the twilight of his career. He chose a typical residential neighbourhood in Moscow - in the distance, we see the hazy shapes of nine-storey blocks of flats of the kind that were built in the 1970s.[5] (By the end of the Soviet era, such neighbourhoods were already “vanishing scenery".) Drawn by the old artist's feeble hand, the dreamlike images of these buildings, with barely visible, thin lines of people following narrow paths in the snow, could serve as a symbolic conclusion to the exhibition's theme: we once again return to the old question of some “other" Moscow, one that is impossible to find, but equally impossible to forget.

* All works published in this article are from the Tretyakov Gallery collection. 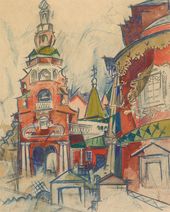 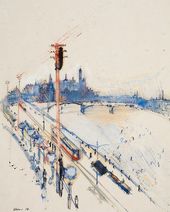 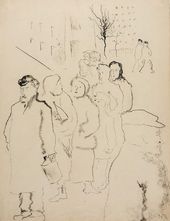 Antonina SOFRONOVA. Queue for Kerosene. 1924
From the series "Types of Streets". Compressed charcoal on paper. 48 × 35.7 cm 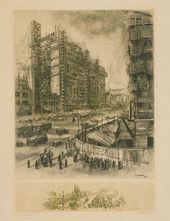 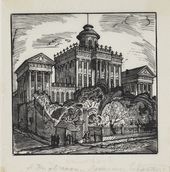 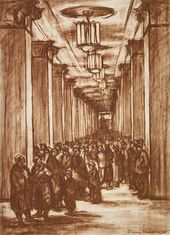 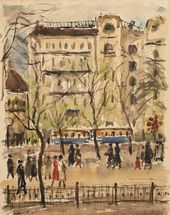 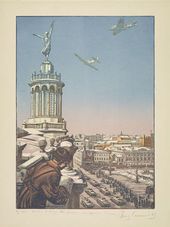 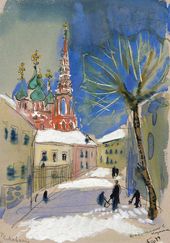 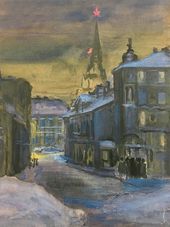 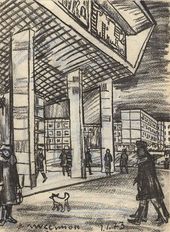 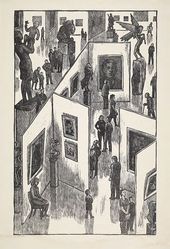