English literature was discovered by Russia’s educated circles in the 18th century, although mainly in German and French translation; soon after the Patriotic War of 1812 there emerged a keen interest not only in British writers, but in the English language as well.

The great Russian poet Mikhail Lermontov (1814-1841) was profoundly influenced by English literature. He started English lessons in 1829 while studying at Moscow University’s privileged boarding school, to which Yelizaveta Arsenieva, the grandmother of the future poet, had sent him. There students studied law, theology, mathematics, physics, geography, natural science, military matters, painting, music, dancing and the ancient languages; an interest in literature was especially encouraged. Among the boarding school’s graduates were such outstanding writers and poets as Vasily Zhukovsky, Alexander Griboyedov and Fyodor Tyutchev.

Enormously gifted, Lermontov studied with great relish. In a letter to his aunt Maria Shan-Girei in spring of 1829 he wrote: "Vacations approaching, so goodbye, Most Honourable School. But don’t think that I am glad to leave, because there will be no more studies. I will study even more at home than i did at school.”[1]

From his early childhood, Lermontov could speak German and French, and later his grandmother hired as governor Mr. Windson, a Russianized Englishman who would be called a la russe. "Fyodor Fyodorovich Windson”. With his German wife Varvara Bertels, he lived in a wing of the house on Malaya Molchanovka Street.[2] Lermontov spent his youth there (1829-1832),[3] and Windson taught him English, as well as introducing him to the works of British poets and writers. Lermontov’s impressions of Samuel Taylor Coleridge's "The Rime of the Ancient Mariner”[4] were reflected both in his early poems (“Kally”, 1830, “Confession”, 1830, “Boyarin Orsha”, 1836) and in his later works (“Mtsyri”, 1839, “Demon”, 1839), as well as in his novel “A Hero of our time” (1840). In all of these works, romantic and realist, a confessional intonation is used.

inspired by the legend that the Lermontov family traced its roots back to Scottish ancestors, the young poet voraciously read the work of Sir Walter Scott in English, and was particularly enchanted by his ballad ‘Thomas the rhymer” about the poet-prophet of the 13th century, Lermont. in his dreams he was carried away to the gloomy castles and green hills of faraway Scotland:

“In my beloved Scottish highlands,
Under a curtain of cold mists,
Between the sky of storms and dry sands,
The grave of Ossian exists."[5]
(“The Grave of Ossian”, 1830)

The same captivating impulse can be heard in the poem “The Wish”,[6] written the same year:

“To the west, to the west I would hurry,
Where my ancestors’ fields bloom,
Where in an empty castle, amongst foggy hills,
Their sacred remains lie."

Lermontov’s second cousin Akim Shan-Girei recalled: “Michel began to study English through Byron, and in a few months he could easily understand it; he would read Moore and the poetry of Walter Scott... but he would never speak English fluently.”[7] As a student of Moscow University, Lermontov received the highest grade[8] from the professor of English Philology, Edward Harvey, who supervised him in his literary analysis of excerpts from Walter Scott, Lord Byron and thomas Moore, the irish poet and singer who was Byron’s close friend and later biographer.

Byron was by far the major iconic figure for the young Lermontov. the British romantic poet exerted tremendous influence on Russian poetry of the 19th century, which is particularly noticeable in Alexander Pushkin’s poems “the Prisoner of the Caucasus” (1821) and “the Fountain of Bakhchisaray” (1823). Lermontov was captured not only by Byron’s poetry, but also by his heroic personality:

The manuscript of the poem bears the poet’s note, "Upon reading the life of Byron [written] by Moore,”[10] a reference to the latter’s "Letters and Journals of Lord Byron”. this book is mentioned in the "Notes” by Yekaterina Sushkova, the addressee of Lermontov’s love lyrics. According to her, in the summer of 1830, when Lermontov was staying at Serednikovo, the Stolypin family estate in the Moscow region, he was "...inseparable from his huge volume of Byron.”[11]

Lermontov’s autobiographical notes are filled with mentions of passages from Moore’s biography:

1) "When i started wasting paper on lyrics back in 1828, i used to instinctively make a clean copy and store them, and i still keep them. Today i’ve read in Byron’s chronicle that he did the same thing - this similarity amazed me.”
2) "There is a view (Byron’s) that early passion discloses a soul which will love the fine arts. i think that such a soul is filled with music.”
3) "Another similarity of my life with Lord Byron’s. His mother in Scotland was foretold by an old woman that he would be a great man and have two marriages; my grandmother in the Caucasus was foretold by an old woman exactly the same thing. God grant this to come true; even if i turn out to be as unhappy as Byron.”[12]

Remarkably, Lermontov’s literary heritage includes two pieces of poetry with English titles, both of them connected with Byron. The first is "Farewell” (1830): after the title, in brackets, Lermontov added "after Byron”. "This is not a translation.,” Dostoyevsky later wrote, "like that of Guerbel and others; this is Byron alive, as he is, a proud and impenetrable genius. Lermontov is even more profound here, I think.”[13] The second is "Had we never loved so kindly” (1832), a free translation of a stanza of Robert Burns taken by Byron as an epigraph to his poem "The Bride of Abydos”.

Lermontov’s poetic gift was unfolding so fast that once he had gone through his fascination with Byron, he would argue back to himself:

"No, I’m not Byron, it’s my role
To be an undiscovered wonder,
Like him, a persecuted wand’rer
But furnished with a Russian soul
I started sooner, sooner ending.
My mind will never reach so high;
Within my soul, beyond the mending,
My shattered aspirations lie:
Dark ocean answer me, can any
Plumb all your depth with skillful trawl?
Who will explain me to the many?
I... perhaps God?.. No one at o//?”[14],
Translated by Alan Myers

Another fascination Lermontov experienced was for the works of William Shakespeare. in his childhood, he heard stories about home theatre performances at Tarkhany, where his grandfather Mikhail Arsenyev, on the day of his own death, played the role of the gravedigger in Shakespeare’s tragedy "Hamlet”.[15] Later, he observed at boarding school a real cult of Shakespeare which enhanced Lermontov’s interest in the British playwright. The beginning of a letter to his aunt Maria Shan-Girei written at that time sounds highly emotional: “I am standing up for Shakespeare. If he is a great poet, it’s in 'Hamlet’; if he is the true Shakespeare, the unencompassable genius penetrating the human heart, and the laws of destiny, the authentic and inimitable Shakespeare, it’s all in 'Hamlet’.”[16]

In his letter, Lermontov narrates the most captivating scenes from “Hamlet”: the story of the gravediggers, the appearance of the ghost in the episode with Hamlet’s mother, Ophelia’s madness. He retells from memory the dialogue between Hamlet and Polonius about a cloud, and that with Guildenstern about a flute. For Lermontov, Hamlet is a proud prince fighting his enemies with irony and strong will. It is no coincidence that he finishes his letter to his aunt exclaiming: “And it’s no good!.. Your letter has stirred me up: how can anyone insult Shakespeare?..”[17]

Lermontov had been fond of painting since childhood, and anything which aroused his soul would appear not only in his verse but also in his drawings, watercolours and oil paintings: his subjects included portraits of his friends and relatives, views of the Caucasus and genre scenes, and he particularly enjoyed drawing running horses and “rugged faces”. He painted all his life, but very few of his works have survived: 13 oil paintings, 44 watercolours, about 50 drawings, a few albums with sketches and caricatures, and 70 sketches on the margins of his manuscripts.

In 1968 the art historian Yevgenia Gavrilova discovered in the collection of the well-known collector and art expert Yegor Makovsky (1800-1886) a drawing which she attributed as a portrait of Shakespeare by Mikhail Lermontov.[18] The portrait is drawn on a thick yellowish sheet of gilt-edged paper with a lead pencil, slightly touched with sanguine. She assumed that the sheet might have been removed from an album: in the bottom right-hand corner there is a barely distinct signature and date, "M.Yu. Lermontov. 1832. [illegible] January”. Gavrilova noted: “Lermontov seems to be taking the image of Shakespeare through the prism of his own perception of the world. Hence the truly romantic style of the portrait - the pose of Shakespeare wrapped in the folds of his coat, a fiery look and the rebellious curve of his brows. That is the essence of Lermontov’s premise, and an evidently unique approach.”[19] The Lermontov House-Museum in Moscow displays his watercolour self-portrait in a felt cloak, and according to Gavrilova there is a definite similarity to the great playwright.

Lermontov maintained a keen interest in Shakespeare throughout his life. Wanting to read again and analyze his works, he wrote to his grandmother in his last letter from Pyatigorsk: “i would also ask for a full collection of Shakespeare, in English, though I’m not sure you can find it in Petersburg; tell Yekim to do it. But please hurry up - if it arrives soon, i may still be here.”[20] There is no evidence as to whether the poet’s grandmother managed to send the collected works in time, and one month later Lermontov was killed in a duel.

Soon his works became available to English readers. in 1843, thanks to the efforts of the Associate Professor of the imperial Lyceum in Tsarskoe Selo, Thomas Shaw, the Scottish magazine “Blackwood’s Edinburgh” published the first English translation of Lermontov’s verse, titled “The Gifts of the Terek”. The earliest translations of his novel “A Hero of Our Time” date from the 1850s. in 1875 Alexander Condie Stephen made the first translation of “Demon”, and six years later, after the Covent Garden production of Anton Rubinstein’s opera of the same name, the poem ultimately captivated the hearts of the British intelligentsia.

Lermontov’s lyrics were published in Charles Thomas Wilson’s “Russian Lyrics: in English Verse” (London, 1887), and the anthology “Rhymes from the Russian” by John Pollen (London, 1891). in 1899 “A Hero of Our Time” was included in the textbook “A Russian Reader” published in Cambridge. Emigres from Russia also published their translations of Lermontov’s works and wrote articles about him: Alexander Herzen wrote an article, published anonymously, for the London magazine “National Review” (1860) in which he emphasized Lermontov’s role as an iconic figure of his generation, still underestimated. Numerous research works in English dedicated to the poet’s life and work have followed, among the most popular the British author Laurence kelly’s “Lermontov: Tragedy in the Caucasus” (1977).

On October 3 2015, the poet’s birthday by the Old Style, a monument to Lermontov, created by the Moscow sculptor Stepan Mokrousov, was unveiled in the old Scottish town of Earlston. The place was selected for its alleged association with Thomas the Rhymer, the legendary 13th century bard who might be an ancestor of the great Russian poet. 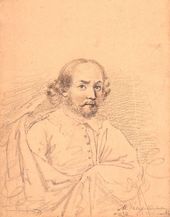 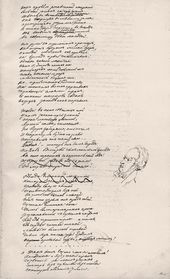 Mikhail Lermontov House-Museum in Moscow. The poet’s room on the mezzanine floor 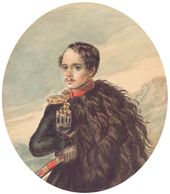 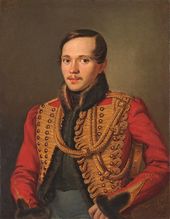 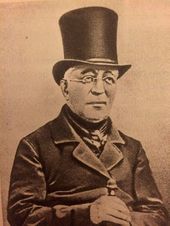 Fyodor Windson, the tutor of Mikhail Lermontov. No later than 1857
Photograph 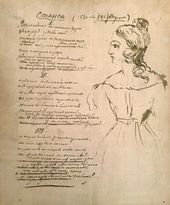 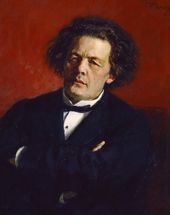