Zurab Tsereteli’s Monument in the Heart of Paris

CHARLES DE GAULLE WROTE IN HIS "WAR MEMOIRS": "WITH EVERY STEP I TAKE THROUGH THE WORLD'S MOST REMARKABLE PLACES, I FEEL THAT THE GLORY OF THE PAST... RECONNECTS TO THAT OF THE PRESENT... IT FEELS LIKE HISTORY IS SMILING BACK AT US TODAY THROUGH ITS STONES AND CITY SQUARES." FOR 2,000 YEARS THE CITY OF PARIS HAS UNDERGONE A CONTINUOUS EVOLUTION FROM ROMAN SETTLEMENT TO MODERN WORLD CAPITAL, AND THROUGHOUT ITS HISTORY THE CITY HAS REMAINED LOYAL TO ITS PRINCIPLES. REJECTING LACK OF TALENT AT EVERY STAGE, IT ACCUMULATES THE MOST SIGNIFICANT AND EXCITING NEW FEATURES, GIVING PREFERENCE TO PERFECT ORDER AND BRILLIANCE. THE NEW MONUMENT BY ZURAB TSERETELI NEAR NOTRE-DAME CATHEDRAL IN PARIS IS FURTHER PROOF OF SUCH A TRADITION THAT HAS TURNED THE CITY INTO THE ARTISTIC CAPITAL OF THE WORLD. WHAT IS PARTICULARLY STRIKING IS THE PERFECT WAY THE NEW SCULPTURE FITS WITHIN THE FAMOUS ARCHITECTURAL ENSEMBLE AND ITS SURROUNDINGS. 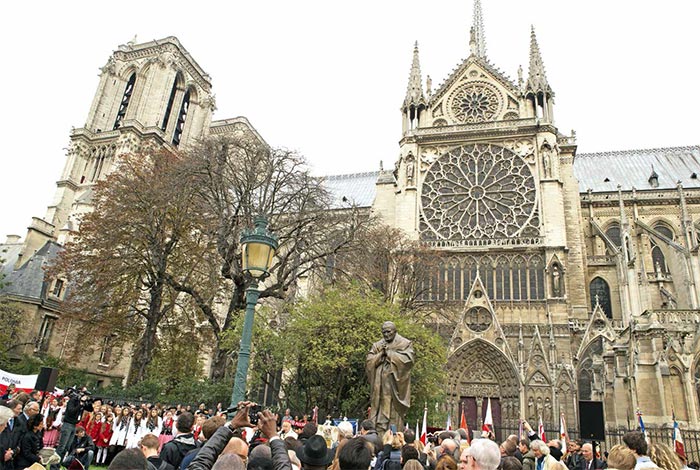 It is a location where the spirit of the Middle Ages still speaks to us. In his poem "Notre-Dame", Osip Mandelstam described the feelings that it evoked in him: "A primal labyrinth, a wood past men's understanding, / The Gothic spirit's rational abyss,/Brute strength of Egypt and Christian meekness, / Thin reed beside oak, the plumb line everywhere king" The Cathedral always was and remains an immense and different world, living its own majestic and sacred life. The whole building seems to be trying to reach the sky and speak to God, letting people admire its architecture that speaks to us about spiritual truth, sins and virtues, portrayed in the figures of the saints and chimera statues born of evil. As Victor Hugo wrote in his novel "The Hunchback of Notre-Dame": "There certainly are few finer architectural pages than this facade, where, successively and at once, the three portals hollowed out in an arch; the broidered and dentated cordon of the eight and twenty royal niches... the frail and lofty gallery of trefoil arcades, which supports a heavy platform above its fine, slender columns." 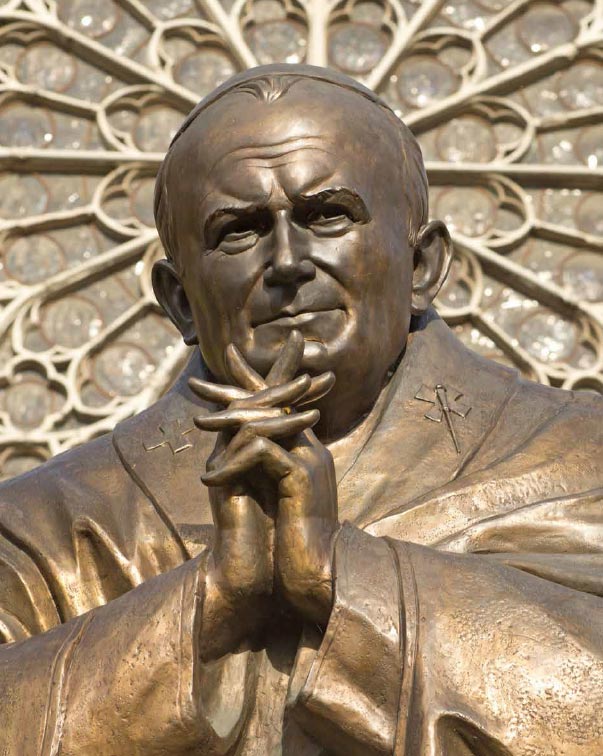 There could hardly be a more difficult artistic task than introducing a new element to one of the world's finest and most famous sites. However, Zurab Tsereteli's undertaking proved successful: his artistic instinct enabled him to see the very specific features that the area had developed over the previous two centuries. Just like everywhere in Paris, the Île de la Cité and the surroundings of the Cathedral changed under Napoleon III during the renovation of the city by Baron Haussmann. The renovation plan removed the overcrowded housing around the Cathedral area, introducing a new rectangular square that inspires calm and a sense of order despite the crowds who cross it day and night. At the top end of the Cité, behind the square, the Cathedral's barrel vaults overlook a garden that was also built under Haussmann. The outstanding construction with its unbelievable interlacements and decor was once called by Auguste Rodin "a clock mechanism with an open cover". Another garden area also emerged along the southern side of the Cathedral stretching over the River Seine. Here, most of all, a special peace and quiet can be felt, filled with reverence towards the Cathedral that according to legend houses the crown of thorns of Jesus brought by the crusaders.

It was there that Zurab Tsereteli erected his monument to Pope John Paul II, recently beatified by the Catholic Church. Cast in bronze, the sculpture stands slightly over three and a half meters tall and is particularly well located. It is on the axis of the southern transept in front of the marvellous facade dominated by the majestic rose window filled with its many-coloured stained glass and the two elegantly pointed towers on the sides of the triangular Gothic pediment. A simple medium-sized plinth of white stone is crowned with a classical oval and separated from the opposite embankment by the River Seine. To the left of the two main towers, the branches of the broad trees seem to protect the sculpture from the immense stone mass of Notre-Dame; to the right, the sacristy which is lower than the actual cathedral and the clergy house, contributes to the sense of changing scale, emphasizing the passage from the giant forms of the Cathedral to the size of the monument itself. The size of the sculpture was well planned: the statue is taller than the form of the human body, but remains comparable to it, which emphasizes the might and greatness of the spirit of John Paul II, and his ability to rise above our world and at the same time remain close to believers. 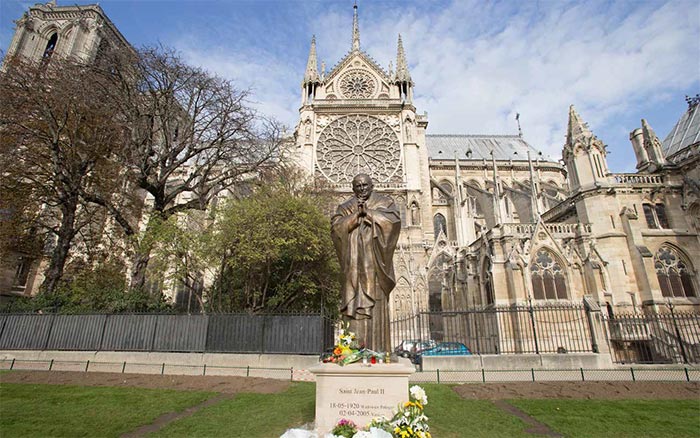 The sculpture is pronouncedly static and monumental, with the mighty lines of the flowing robe and the folds of the cassock descending like fluted columns. The hands are raised and clasped in a gesture of prayer, the head slightly tilted to give an impression of intent concentration and witness of a passionate appeal to God and inviolable faith. The features of John Paul II are particularly expressive, as seen in Tsereteli's other recent works like the monument featuring the statesmen participants of the Yalta Conference. There is the powerful and wide forehead of a thinker, the attentive human eyes, the soft and at the same time monumental mouth of the speaker, and the firm and clean-cut chin. The master clearly aimed to depict the spiritual might of John Paul II, his mission accomplished and his very life itself.

The sculpture is accomplished in a classical style which does not contradict the Gothic atmosphere of Notre-Dame: the sculptor has not used any elements of the medieval, appealing purely to traditional classical forms. Among the greatest Gothic cathedrals, Notre-Dame is probably the one that most conveys feelings of classical peace and harmony. In my opinion, this establishes the perfect link between the modern sculpture and the ancient Cathedral of Paris. It is an outstanding triumph for this contemporary monument to have attained such artistic unity.

However, the achievement is not simply a matter of chance. Tsereteli, just like any artist - and one who is truly in love with this city - has a very special relationship to Paris, and the story of his perception of the French capital dates back many years. In his youth he used to listen to stories about Paris told by his teachers, friends and relatives: back in the 1920s and 1930s a number of artists returned to Tbilisi from immigration. Among them were such figures as Lado Gudiashvili who was part of the French bohemian artistic world, and a friend of Amedeo Modigliani. Tsereteli was lucky because he had links to some of the remarkable representatives of the post-war immigration. His close friends were respected among the Parisian elite and they managed to help him meet some of the great artists of the 20th century: Marc Chagall and Pablo Picasso were still alive.

Today Zurab Tsereteli is a respected figure in Paris. He is an honoured foreign member of the French Institute and of the Academy of Fine Arts, an accord given to very few Russian artists. He frequently travels to work in Paris, where he creates new artworks with unfailing intensity, inventiveness and brilliance. Throughout his life Paris has played an important role in Tsereteli's oeuvre, stimulating a very special artistic mood, the impression of brightness, lightness, optimism, giving rise to the impetus to work as much as possible. The artistic aura of the famous city has, even more than usual, awoken in the artist a creative "concentration" and passion for the art that the master has accomplished.

"To be Paris, means to move forward," Victor Hugo wrote in his article "The Destiny of Paris". The axiom is also valid for Tsereteli: his monument to John Paul II is a significant milestone in the artist's work, a step taken successfully forward. There is no doubt that the erection of this work by the President of the Russian Academy of Arts in the very centre of French culture, particularly in the current political climate, can be regarded as Russia's victory - and yet another manifestation of the strength of the long-lasting cultural and political ties between Russia and France. 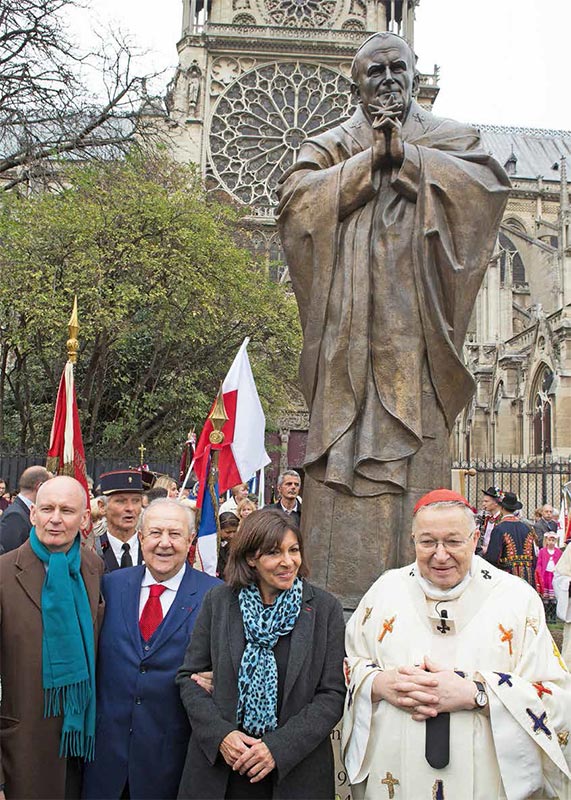