I LOVE RUSSIAN ART. ITS SCOPE, VASTNESS, TENDERNESS, AND ITS POWER, AKIN TO THE EXPANSES OF THE LAND ITSELF, HAVE ALWAYS APPEALED TO THE EUROPEAN IMAGINATION. PUSHKIN, DOSTOYEVSKY, AND TOLSTOY, ALONG WITH MY CONTEMPORARIES MAYA PLISETSKAYA, RODION SHCHEDRIN, ANDREI VOZNESENSKY, NIKOLAI KARACHENTSOV ANDREI TARKOVSKY, ALEXEI RYBNIKOV MARK ZAKHAROV AND ALEXANDER BURGANOV WILL ALWAYS BE AMONG THE SHINING STARS OF OUR INTELLECTUAL EXPERIENCE. EVERY ONE OF THEIR ANNIVERSARIES IS A MAJOR CELEBRATION FOR ALL OF US.

Back in 2007 I came across a few works by Alexander Burganov at a small exhibition at La Maison Russe in Paris; I was enchanted by the scope and vitality of his creations. He has a unique sense of style, and I was taken by his original ideas on art. I immediately invited him to take part in the festival I organize in Lacoste, near Avignon, adding a new dimension to an event that in previous years had been traditionally dedicated to theatre and music. I was astonished by his artistic temperament when he arrived with two gigantic containers of sculptures. Thus, for the first time ever, a group of enormous white sculptures was installed in front of the castle of the Marquis de Sade. Glistening against the blue sky of Provence, they were dazzling and truly beautiful. I adore Lacoste, and it reminds me of small Tuscan towns - no wonder, since France was part of the Roman Empire for centuries!

On March 12 2008 I opened my friend Alexander Burganov's exhibition on the Champs-Élysées, next to my theatre. This event was the culmination of the admiration we had for one another's art - at the beginning casual acquaintances, we went on to develop an active and fruitful artistic cooperation.

Undoubtedly, Burganov's poetic symbolism carries on the traditions of such masters of European Surrealism as Dali, Cocteau and Magritte, but in a new context, and with a Russian accent. Such works as "Large Heel", "Muse", and "Prophet" thrill the viewer and reveal new meanings of somnambulistic revelation. In Burganov's art, I celebrated the new surge of Surrealism coming from Russia.

Our gala presentation on the Champs-Élysées was a great success. It was attended by the Parisian artistic elite; my friends, with many Russian artists among them, came to participate in their compatriot's triumph. I was happy to have made this excellent choice.

Burganov's sculpture "Welcome", with its outstretched arms ready for embrace, stood in the Champs-Élysées calling for kindness and harmony in our chaotic, difficult times. For me, it became a cosmic symbol of kindness and friendship among people. This enormous sculpture with its outstretched arms (spanning 15 meters, no less!), literally soaring in the air, faced the Elysee Palace, the residence of the French President. I love the whole world, so to me human arms opened up in embrace are a very meaningful symbol.

I have always tried to take part in the most important events in the world of 20th-century art. For instance, the great artists Picasso, Dalí, Cocteau and Magritte were also among my friends. Cocteau and I worked closely together on five films - I used my own measurements to make his costumes: like mine, his shoulders were 77 cm wide. Jean Marais and I were also built similarly. Among other things, I made his costumes for the wonderful film "Beauty and the Beast", where he starred next to the heavenly Josette Day.

Let me say a few more words about my friends and fellow artists. The sculptor César - his full name was César Baldaccini - was also a very good friend of mine. We belonged to the same generation, and our ancestors had lived in northern Italy. An extremely gifted man - France's premier film award bears his name - he was also the ultimate non-conformist. Many a time I would tell him that his entourage was not worthy of his talent; as a friend, I would urge him to join the Academie francaise, but he always avoided that subject. When César finally consented, I spoke with the President of the Academy and then wrote a recommendation and a letter of commendation. (Incidentally, I created the ceremonial costume of the Academicians. I borrowed it from the Napoleonic era - green and gold were the ceremonial colours of the Empire style, plus the sword.) When the date of the ceremony was already set, the Academy received a letter from him withdrawing his candidacy; all further remonstrations were in vain. Four years later César was dead. Almost all my contemporaries have passed on, I am the only one left. To think that there was a time when my friends, people of my generation owned (or reigned over) whole blocks of stores, galleries, restaurants and boutiques...

Ah, Marlene Dietrich! I talked her into letting me work on one of her theatre performances, even though I had to wait for two years for that. The dresses I made for her! The audience went wild; people sat on the floor in the aisles. After a fight with a particularly obnoxious photographer I ended up sporting a large black eye, which I did not even try to conceal - in fact, I was a bit proud of it. That was Marlene Dietrich's last theatre performance; she died two months later. Compared to her, Greta Garbo's talent paled.

I knew other outstanding cultural figures, some of them from the previous generation, or older. Among them was the unforgettable Alberto Giacometti, the melancholy Swiss sculptor of Italian and French descent. And there was another sculptor, Constantin Brâncuși, a strong and stubborn man. We saw a lot of each other - I was young and wanted to seize the whole world. Like a sponge, I absorbed the energy that these great men emanated, and I was happy to be among their friends.

As for Russia, I have to accord it a special place in my life.

During the post-war years, Russia, the mysterious land of social justice, drew the attention of thinking people from all over the world. I was among the first to visit Moscow, as early as the 1960s; it turned out rather interesting from a business point of view. I did not, however, see the promised "heaven on earth" - instead, I met some outstanding people. Everyone was open, friendly and kind-hearted, from the ordinary people to the country's leadership. The most important thing that I took back from Russia was my encounter with its great culture and its gifted artists, writers and musicians, whose work is of universal importance. Their talent has continued to be an inspiration to me.

I am literally in love with Russia; I have many friends there. I admire Maya Plisetskaya and her husband, the great musician Rodion Shchedrin. We know that the system denied them any opportunity for a creative breakthrough; Yekaterina Furtseva, Minister of Culture and, incidentally, a very beautiful woman herself, played a major role in enforcing those restrictions. During the opening night of "Carmen Suite" the first row of seats, which were reserved for the political elite, remained empty. Only Furtseva and I were sitting there in the middle. I adore Maya, I dress her, and I enjoy making beautiful clothes for her.

I am constantly humming tunes from "Juno and Avos'" - indeed, they are a part of my soul. I am happy to have known Andrei Voznesensky, who is unfortunately no longer with us, Alexei Rybnikov, and Nikolai Karachentsov. They are all my friends, I am always glad to see them, and happy to be of assistance, if needed.

And now, to Burganov. I called his sculpture "Welcome" and placed it in the centre of the composition at Lacoste, in front of the castle of the Marquis de Sade. This enormous monument created an inimitable ensemble against the background of the epic valleys and foothills of the Alps. Since then, Alexander Burganov and I have often worked together, and his monument to the Marquis de Sade was a wonderful result of our friendship.

I do not share the Marquis de Sade's worldview; however, I recognize him as a tragic figure, a person who was able to withstand a hostile environment in spite of his 30 years in prison. Also, his persona drew the attention of many cultural figures of the 20th-century French avant-garde, including the Surrealists, Picasso, and especially Charles Baudelaire, who predicted that a time would come when de Sade would receive a fitting monument. Burganov and I decided to carry this idea through, and Alexander found a sophisticated and fitting creative solution for this theme.

Like me, he set aside de Sade's philosophy; instead he tried to reveal the ambiguous and resolute character of the man. His arms crossed in front of him, de Sade is shown as a libertine, unconstrained and free... but he is looking at the world through the iron cage set over his head. Everyone stops to look at this monument; there is a constant clicking of cameras. I cannot even imagine this place without our monument.

I am happy to be friends with Alexander Burganov. His enormous bronze "Muse", a mysterious and beautiful work of art, stands in front of my house on the Champs- Élysées in Paris; his huge, 15-meter-high sculpture "Welcome" and the remarkable monument to Marquis de Sade adorn Lacoste.

I am sure we will do many more things together. 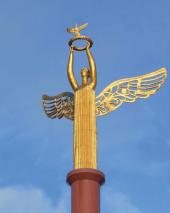 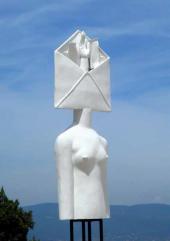 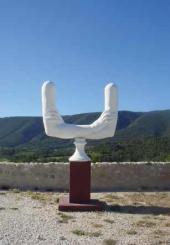 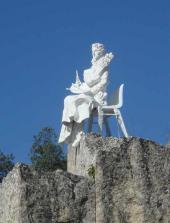 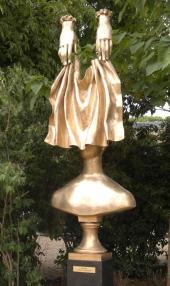