The Grekov Studio of War Artists: From Its Inception to the Present Day

FRANZ ROUBAUD (1856-1928) WAS THE FOUNDER OF PANORAMA PAINTING IN RUSSIA IN THE LAT 19TH-EARLY 20TH CENTURIES, AND BECAME FAMOUS FOR HIS COMPOSITIONS "THE SIEGE OF SEVASTOPOL" AND "THE BATTLE OF BORODINO". ROUBAUD BELIEVED THAT "A MILITARY ARTIST SHOULD CULTIVATE HIS FACULTY TO QUICKLY GRASP WHAT IS MOST COMMON AND TYPICAL, TO CAPTURE THE MODE IN MOTION, TO DRAW AND TO PAINT FROM MEMORY, RELYING ON WHAT HAS STUCK IN HIS MIND... FOR A LONG TIME ROUBAUD TAUGHT AT THE ACADEMY OF FINE ARTS IN ST. PETERSBURG, EDUCATIN( A LARGE GROUP OF TALENTED RUSSIAN BATTLE-SCENE PAINTERS, THE MOST FAMOUS AMONG WHOM WAS MITROFAN GREKOV.

The subject of most of Mitrofan Grekov's works was the Red Army; for a variety of reasons many of his projects remained unfinished, and throughout his career he also worked in other more traditional genres such as easel-painting. In 1934, after signing up to lead a team of artists to produce a large panorama titled "Perekop", Grekov travelled to Crimea on that project, but died there suddenly on November 27 of that year from a heart attack.

On November 29 1934, the People's Commissar of Defence of the USSR Klim Voroshilov issued an order establishing the Grekov Studio of Amateur Red Army Art under the aegis of a special cavalry brigade. Thus, the artist's dream was realized immediately after his death."Not every gifted painter or graphic artist, no matter how talented, can become a military artist. You have to study the art of war very well, know its secrets and smells, and have a clear understanding of the actions of troops and their units, as well as of individual soldiers and officers. You must put yourself in the serviceman's shoes, smell the powder, gain experience of the rifle, artillery and machine-guns. Most importantly, you have to come to know better those who fight, and attune yourself to their spiritual side," Grekov had said. Astonishingly accurate and tested by time, this statement by the pioneer remains the keynote for each new generation of "Grekov artists".

In the first years of its existence the team consisted of amateur artists, its students comprising talented Red Army soldiers, who continued to undergo combat and political training while attending art classes in their spare time. They were taught and mentored by renowned Soviet artists who were members of the First Artistic Council and tutored students on a monthly basis, including Georgy Savitsky, Alexander Gerasimov, Yevgeny Katsman, Vasily Svarog, Nikolai Kotov, Mikhail Avilov and others. The most gifted students were admitted to art schools.

In 1938, pursuant to an order from the commander of the Moscow Military District Semyon Budyonny, the studio of the Red Army's amateur artists was renamed as the "Grekov Studio of War Artists", and the team of professional artists who would work on assignments from army commanders began to come together. By 1940 the first professional artists to join the Studio included Anatoly Gorpenko and Sergei Godyna, as well as Pyotr Krivonogov, who later created the composition "Victory", working near the Reichstag building.

By that time the Grekov Studio artists were already producing paintings focused on scenes from the Winter War, after travelling to the frontlines in the winter of 1940, a journey which proved the first test of their stamina and ability to work in difficult field conditions. Efforts were focused on improving the professional skills of the Studio members: one after another the artists exhibited at Moscow's best venues, but their mission would not be to inject glamour into past military exploits but rather to chronicle the future trials and tribulations of war.

During the first days of the Great Patriotic War some of the Studio's students left for the front in march companies. Others of its artists were seconded to propaganda bureaux where they accomplished, in a very short time, hundreds of murals urging soldiers to fulfil their duty as true patriots. The Studio was tasked with producing serial posters under the general title "The Red Army Soldier's News Sheet", which were to be distributed to different army units. During the war the Grekov Studio released many posters which became symbols of the times, like Nikolai Zhukov's and Viktor Klimashin's "We'll Defend Moscow!" and Leonid Golovanov's "We'll Reach Berlin!".

In winter 1941 a group of young military artists from the Studio went to the Western front, to embed with the army headed by Lieutenant General Konstantin Rokossovsky. In the early winter of 1942 the Studio accomplished an important mission when a group of its artists travelled to Stalingrad. The artists worked directly as part of the army units, sketched episodes of combat and industrial facilities, and scenes where artillery stood amidst broken machine-tools, or a division command centre was sited within the skeleton of a burned-out train car.

Groups of the Studio artists would return intermittently to their frontline office, where they would leave behind their sketches and stock up with materials necessary for their future work. They advanced together with the troops, reaching Warsaw, Prague, Bucharest, Budapest and Vienna, sketching battles as well as the liberated peoples. When the Soviet army began its offensive on Berlin, the military artists were ready, capturing the heavy fighting on the outskirts and in the city's streets in a number of drawings and sketches. The wartime activities of the Grekov Studio artists culminated in Nikolai Zhukov's visit to the Nuremberg trials, in the course of which he created more than 200 portraits - of the Nazi war-criminals, defence lawyers, witnesses, judges and journalists.

The Studio made a significant contribution to the struggle against the enemy. Their immediate participation in military action enabled the artists to truthfully convey in their works the reality of the battle-fields and experience in areas behind the lines. For every Studio artist the war became a school of professional craftsmanship and a valuable foundation for their future works. The war created an affinity between the artists and the army, bringing them closer to the Soviet soldier at the moment of his greatest surge of spirit and physical strength.

After the Great Patriotic War the Studio artists, in addition to thematic, narrative compositions, began to try their hand at panoramas and dioramas - the art form of which Mitrofan Grekov had dreamed all his life. The first dioramas were fairly small, but as they mastered their skills the artists approached them as a synthesizing form of visual art, creating the necessary spatial illusion by using real objects as an integral element to support the general subject or theme.

In 1982 the panorama "Debacle of the Nazi Troops near Stalingrad (The Battle of Stalingrad)" appeared in Volgograd, the creation of a team of artists comprising Nikolai But, Viktor Dmitrievsky, Pyotr Zhigimont, Pyotr Maltsev, Marat Samsonov and Fyodor Usypenko.

This giant composition had a circumference of 120 metres and was 16 metres in height, with the entire space between the canvas and the viewing platform filled with appropriate objects. "The Battle of Stalingrad" was the only panorama created in Russia in the Soviet period, and it became the focal point of the museum of the Battle of Stalingrad.

Shortly before the 50th anniversary of the Soviet Victory in 1995 the Central Museum of the Great Patriotic War in Moscow unveiled its installation consisting of six dioramas highlighting the most important battles of World War II: "Counter-offensive of the Soviet Troops Near Moscow in December 1941" (Yevgeny Danilevsky), "The Siege of Leningrad" (Yevgeny Korneev), "The Battle of Kursk" (Nikolai Prisekin), "The Battle of Stalingrad. The Circle Closes" (Marat Samsonov and Alexander Samsonov), "Assault-crossing on the Dnieper" (Viktor Dmitrievsky), and "The Battle of Berlin" (Veniamin Sibirsky).

Today the artists of the Grekov Studio continue this tradition of diorama and panorama compositions as leaders in their field. In 2010 the Honoured Artist of Russia Pavel Ryzhenko accomplished the diorama "The Baptism of Prince Vladimir's Army in Chersonesus", and the following year created a diptych themed on the Great Patriotic War which consisted of two dioramas, "The Start of the War. 1941" and "The Battle of Moscow", focusing on events on the Field of Borodino in October 1941. In 2013 in Minsk the Belarus Museum of the History of the Great Patriotic War moved to a new building, where it displayed two dioramas created by Studio artists: "The Defence of Minsk. 1941" (devoted to the fighting near the town of Zaslavl) and "The Minsk Trap" ("Operation Bagration"). In 2014 Sergei Troshin created the diorama "The Novorossiysk Landing Operation. September 1943" to mark the 95th anniversary of the celebrated event when the Black Sea Fleet joined forces with the 41st Sevastopol Nakhimov Marines Brigade. On the anniversary of the day of that landing this installation was mounted in the renovated museum of the brigade's compound in Sevastopol.

In 2014 another diorama created by Ryzhenko was ceremoniously unveiled at the Vladimirsky skete of the St. Tikhon Monastery near Kaluga - "The Great Stand-off on the Ugra River", devoted to the landmark historical event that marked the end of Tatar rule over Moscow.

The Russian craftsmen continue their tradition of panoramas and dioramas, with each new project fulfilling patriotic, cultural and educational roles.

The unique creative team that is the Grekov Studio of War Artists unites a rare variety of professionals, and has existed now for more than eight decades. A cultural treasure trove of Russian realist art, the tens of thousands of paintings, graphic pieces and sculptures created by the Studio artists are distinguished by the diversity of their themes. These artists have created world-class works of art, too, like the sculpture "The Motherland Calls" on Mamayev Kurgan in Volgograd and the statue of the Soviet soldier in Berlin's Treptower Park by Yevgeny Vuchetich; the painting "Victory" (1948), by Pyotr Krivonogov; and Sergei Prisekin's "He Who Comes to Us with a Sword Will Die by the Sword", the painting adorning the Hall of the Order of St. George in the Great Kremlin Palace. In addition, the Studio artists have participated in projects focused on restoration, and the creation of murals and iconostases for churches, as well as frescoes. Today the Studio boasts a large team of 30 superb artists working in the vein of contemporary realism, highly-skilled painters, sculptors and graphic artists who are numbered among the "Top 100" of Russia's best artists.

These artists whose work has focused on the history of the Russian state and Russian army are very important: capturing the achievement of the country's military in art, showing the source of the army's and the people's spiritual strength, and chronicling events through visual imagery is the challenging, noble and honourable mission of these battle-scene painters. Taking on the baton of Mitrofan Grekov, these contemporary battle-scene painters, the "Grekovians" as they proudly call themselves, continue to uphold the highest traditions of Russian realist art. 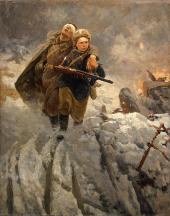 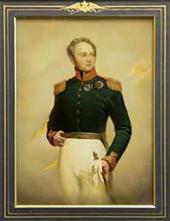 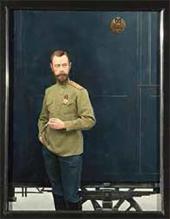 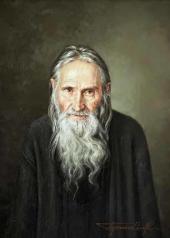 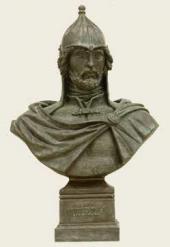 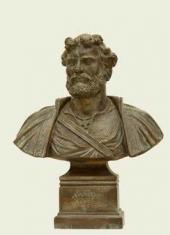 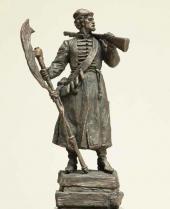 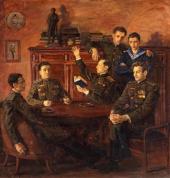 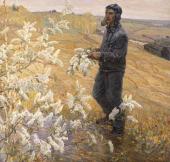 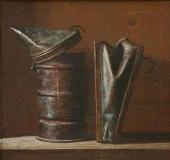