19th- and 20th-century paintings, drawings and sculpture from the Pushkin Museum

Virtually all major Russian artists from the 19th to the 21st century have in their time turned to the theme of Alexander Pushkin in their art. Orest Kiprensky, Vasily Tropinin, Ivan Aivazovsky and Nikolai Ghe; Ilya Repin and Valentin Serov; Mark Antokolsky and Paolo Troubetzkoy; Vladimir Favorsky and Alexei Kravchenko; Kuzma Petrov-Vodkin and Arkady Plastov; Mikhail Anikushin and Yekaterina Belashova; Konstantin Yuon, Vitaly Goryayev, Vasily Shukhaev, Nikolai Ulyanov, Viktor Popkov, Pyotr Ossovsky, Igor Obrosov and countless others have been inspired by the poet over the years.

The Pushkin Museum boasts some 4,000 paintings, drawings and sculptures featuring images of the poet. The pride of the collection is, naturally, those portraits created in Pushkin's lifetime. Among these are Yegor Geytman's engraving, which appeared in the first edition of the "Prisoner of the Caucasus", and Nikolai Utkin's engraving made from the Kiprensky original which served as the frontispiece for Baron Delvig's "Northern Flowers" almanac from 1828. As the poet's popularity grew, so too did readers' interest in his life: thus, Utkin's was the first of many depictions of Pushkin in printed works. The "Nevsky Almanac" for 1829, for instance, published an engraving by Geytman made from Alexander Notbek's sketch for "Eugene Onegin" that drew a famous epigram from the poet.

Having the Kokoushkin bridge crossed
His... against granite pier
Alexander Sergeevich Pushkin himself
And Mr. Onegin stand together close and near
Not looking at the prison-fortress
The mighty symbol of thy fate
He thoughtlessly turned his back to it:
I won't drink thy water — never say

Among the depictions of Pushkin dating back to his later years, of particular interest is an engraving by Thomas Wright. It is thought that the poet himself might have commissioned this likeness from the English artist for a forthcoming edition of his collected works. The engraving was finally created in March 1837, shortly after Pushkin's death. "Observe Pushkin's features, to which the Englishman has paid particular attention," wrote Ilya Repin of this work. "This is the head of a public figure; the brow of a thinker. His brain occupied itself with matters of state concern."

Another valuable exhibit is an unknown Russian artist's mid-19th century copy of Orest Kiprensky's portrait of Pushkin, commissioned by the poet's close friend Prince Pyotr Vyazemsky. Coming from Vyazemsky's estate at Ostafievo near Moscow, this unique memorial tribute is known as the "Ostafievo copy".

In their many memoirs of Pushkin that appeared after his death, contemporaries sought not only to recreate the poet's external appearance, but also to show his inner beauty. No less interesting, indeed, is Pushkin's view of himself. Whilst a student at the Tsarskoye Selo lyceum, the poet penned the entertaining verse "Mon Portrait" (1815) in French. Throughout his life, Pushkin was given to doodling self-portraits in the margins of his work. Intended solely for his own entertainment, not for a wider audience, they only received critical evaluation and became known only a century later. Some of them were included in the exhibition, as were poems addressed to Pushkin in his lifetime by his friends Wilhelm Kiichelbecker, Anton Delvig and Nikolai Yazykov.

Many of the images of Pushkin in the museum's collection belong to the second half of the 19th and early 20th centuries. These retrospective likenesses were created by artists who studied the portraits of Pushkin made during the poet's lifetime, as well as his self-portraits, biography and oeuvre. Each of their works bears the mark of its period, as every generation found in the genius of Pushkin something new, vital and in tune with the times. Inspired by Dostoyevsky's speech at the unveiling of a statue of Pushkin in Moscow, Lev Dmitriev-Kavkazsky's 1880 etching of the poet is by rights seen as the first successful and interesting attempt to create a likeness of Pushkin from the imagination. Visitors to the exhibition were also able to admire works by Vasily Masyutin, Mstislav Dobuzhinsky, Vladimir Favorsky, Kuzma Petrov-Vodkin, Vasily Shukhaev, Nikolai Kuzmin, Tatyana Mavrina, Anatoly Itkin and other artists. Anniversary years such as 1937, 1949, 1987 and 1999 naturally saw the greatest number of portraits of Pushkin being created.

Likenesses of Pushkin began to appear in books during his lifetime. The first posthumous publication of the poet's works, which appeared in 1838, and the 1855 Pavel Annenkov edition both featured an engraving by Nikolai Utkin as frontispiece. 1899 saw the first illustrated three-volume edition of Pushkin's collected works published by Pyotr Konchalovsky, the father of the famous painter. The best artists were involved: Vasily Surikov, Ilya Repin, Isaak Levitan, Mikhail Vrubel, the brothers Viktor and Apollinary Vasnetsov, Konstantin and Sergei Korovin, and many others. The frontispiece portrait was created by Valentin Serov. The practice of using a portrait of Pushkin as frontispiece subsequently became extremely popular. Pushkin's works, published in huge print-runs, featured likenesses of the poet by both famous and little-known artists, many of which could be seen at the exhibition. From the late 19th century onwards, Pushkin began to appear in short stories, novels and plays such as Konstantin Paustovsky's "Our Contemporary (Pushkin)" and Mikhail Bulgakov's "The Last Days (Pushkin)".

In Pushkin's lifetime, no artist created a sculpture of the poet: Alexander Terebenev's statuette, created after the poet's death, was the first. The exhibition included models of statues of Pushkin by Alexander Opekushin (erected in Moscow in 1880), Robert Bach (Tsarskoye Selo, 1899) and Mikhail Anikushin (Leningrad, 1957), as well as works by Amandus Adamson, Paolo Troubetzkoy, Oleg Komov, Isidor Frikh-Khar, Yekaterina Belashova and other sculptors.

The works presented at the exhibition offered different interpretations of the poet's image, as each new generation sought, and found, in his genius something to hold dear. Vissarion Belinsky expressed his thoughts on the possibility of such never-ending discovery when studying Pushkin: "Pushkin is one of those phenomena that carry on living, not stopping at the point at which death waylaid them, but continuing to develop in social awareness. Every generation has its own opinion on them, and however astutely it may judge them, the following generation is always able to bring something new and even more perceptive to the debate." 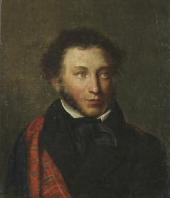 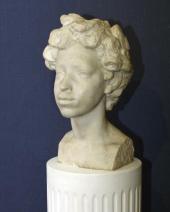 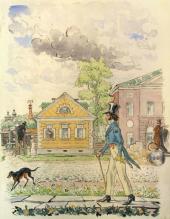 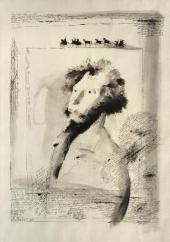