In the spring of 2010 the Museum of Oriental Art in Moscow organized two exhibitions themed around the relationship of Russian artists and Central Asia. The first show - “Turkestan Avant-garde” - mostly featured pieces from the 1920s and 1930s, while the second, “Rakhmat, Tashkent!”, was timed to coincide with the 65th anniversary of victory in the Great Patriotic War (World War II). It featured mostly paintings and drawings created by artists who, evacuated to Central Asia, lived there from 1941 to 1945.

The name of the second show is borrowed from the draft of a poem written by Anna Akhmatova in Leningrad in 1945, after she spent in Tashkent “800 happy days” (from November 1941 to May 1944)1:

Even the Uzbek spelling of the city’s name — with an “o” — is imbued with the poet’s gratitude. The emphasis is not exclusively on evacuated artists, either, given that five of the 16 artists — Pavel Benkov, Alexander Volkov, Zinaida Kovalevskaya, Alexei Podkovyrov and Ural Tansykbaev — featured at the “Rakhmat, Tashkent!” show lived in Central Asia before the war.

It is interesting to concentrate on some of the issues highlighted in the exhibition. Orientalism, or “orientality”, is the first and most important: the artistic meaning of these two cognate words can be summed up as a mobilizing and positive perception of the Orient by a creative personality who conveys his “Oriental” impressions in his artwork. The images, however, included not only phantasms — the artistic spell cast by the Orient was so strong that it produced much more than “Oriental phantasmagorias”. The artists “tried to create a modern visual vocabulary from a synthesis of the Western and Eastern artistic traditions”3.

The works presented at the “Rakhmat, Tashkent!” show, itself a continuation of “Turkestan Avant-garde”, revel in the same “joys of Orientalism”, with signs of wartime barely perceptible — to discern them, one needs to study the paintings and graphic pieces very carefully.4

The second and more obvious issue can be summed up as the Russian artists’ undertaking “to transmit culture” to Central Asia. With local visual arts practically non-existent in the early 20th century, the mission of educating indigenous artists along European and Russian academic principles was of paramount importance. As the “Turkestan Avant-garde” show demonstrated, the results of this “educational endeavour” were hardly impressive: the native Central Asian ethnic communities in the 1930s produced only two artists of note — Ural Tansykbaev in Uzbekistan, and Byashim Nurali in Turkmenistan.

Any review of the specific pieces on display must start with one of the most famous and talented Central Asian artists, the Fergana native Alexander Volkov, who received a solid artistic education before the Bolshevik revolution and possessed strong leadership abilities; in 1927 he organized, together with other artists, an association “Masters of the New Orient”, and in the early 1930s founded a group of artists called “Volkov’s Brigade”. By that time Volkov had already created such pieces as “Mourning”, “Golden Tea-house”, “Pomegranate Tea-house”, “Tea-house with a Water-pipe”, “Caravan”, “Fruit-seller” and many other paintings with outstanding compositional and colour qualities.

The “Masters of the New Orient” included Mikhail Kurzin and Mikhail Gaidukevich, as well as Alexander Nikolaev, who was a student of Kazimir Malevich. The Islamic Orient and the art of the Islamic miniature cast so strong a spell on Nikolaev that no one was much surprised when he assumed the pen-name Usto Mumin (the “artist who took up faith”). The Museum of Oriental Art holds many of Nikolaev’s pieces, including such paintings as “Rites with a Pomegranate”, “Boys with Quails”, “Portrait of a Young Man in a White Turban”, “Rich Land-owner” and graphic pieces such as “Young Man, Pomegranate Lips”, “Hoja Nasreddin”, and “Portrait of Usto Shokhaidarov”.

Volkov succeeded in making several talented artists join the group. Among them was Nikolai Karakhan, who created paintings with a rich colour design and an epic sweep such as “Coat of Arms of the New Republic”, “Campaign against Illiteracy”, “A Champion Brigade of Women Workers”, “Road to the Village”, “First Earthing”, and “Harvesters Heading Home”. The works of the stepbrothers Alexei Podkovyrov and Ural Tansykbaev, who often worked together under the single pseudonym “Atanpod” (including the sketches “A Team of Village Residents Fight against the Basmachi [anti-Soviet Turkic resistants]” and “The Internationale”, are also well known. Little is known about the life of Pavel Shchegolev, the creator of large paintings like “Extraction of Sand”, “Leninists”, “Constructing a Bridge. At the Construction Site”.

Volkov’s group worked in Tashkent, while its counterpart in Samarkand was a workshop called “Izofabrika”, organized in 1930-1931 by Oganes Tatevosyan. Apart from Tatevosyan, the group of artists working at “Izofabrika” included Var-sham Eremyan, Nadezhda Kashina, Zinaida Kovalevskaya, and Yelena Korovai: the exhibition featured their paintings and drawings, posters, and papier-mache murals.

In Turkmenistan, Nicholas Roerich’s disciple Ilya (Ruvim) Mazel, who had settled in Central Asia as early as 1915, organized in Ashkhabad in 1920 a School of Oriental Arts, but Mazel relocated to Moscow in 1923 (the show featured some of his graphic works). The most noteworthy among his students were Sergei Beglyarov, Alexander Vladychuk, Nikolai Kostenko, and Olga Mizgireva. The first professional Turkmenian artist Byashim Nurali, whose works include remarkable portraits such as “Portrait of the Carpet-weaver Khalidzha”, “Portrait of a Russian Girl”, and “Harvesting Grapes”, was also educated at the school.

The artist Pavel Benkov (1879-1949) occupies a very special place. A native of Kazan who studied at the Academy of Fine Arts until 1908, Benkov visited Central Asia in 1928 and 1929, and fell so much in love with it that he moved to Samarkand in 1930, where he spent the rest of his life. The creator of a distinctive Realist style, Benkov accomplished portraits marked by their psychological insights and landscapes bathed in air and sun (such as works at the “Rakhmat, Tashkent!” show, like “Tea-house in the Registan” and “Women Friends. Letter from the Front”).

Noteworthy works by the Central Asian evacuees featured at the “Rakhmat, Tashkent!” exhibition include Vladimir Favorsky’s linoleum prints from his “Samarkand” series (“Conversation about Gun Powder”, “Little Donkeys”, “An Araba”) — the specimens of a distinctive “classical” style distinguished by the elegance of composition and crisply silhouetted figures. The show also featured large series of graphic works by Meer Akselrod, Amshei Nurenberg, Alexander Labas, and Robert Falk.

Throughout the shows the influence of Russian art on the development of national art schools was evident. 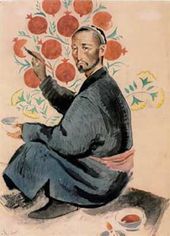 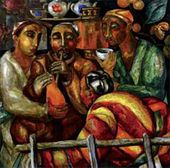 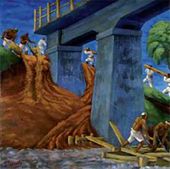 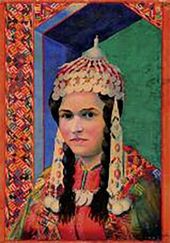