Discovering the World. Drawings of the French masters from the Louvre and Musee d’Orsay in the Tretyakov Gallery

The richness and variety of the graphic art collection of the Louvre Museum always makes it of particular interest. The subject chosen for the exhibition in Moscow was the journeys of European artists - from the late 16th to the 19th centuries.

Created during the reign of Louis XIV, the “King’s Cabinet” graphic collection contained several thousand pieces at the end of the 17th century, due to the acquisition of part of the collection of the banker Everard Jabach. The latter had purchased drawings in Italy as well as in Flanders, where he came into ownership of some of the lots put on sale after the death of Rubens. They were later complemented by works from the studios of Charles Le Brun and Pierre Mignard, the court painters. In the 18th century collecting drawings was extremely popular in Paris, and the King’s Cabinet collection grew thanks to donations and acquisitions, such as the sale of Mariette’s collection in 1775. During the Revolution in 1793 the royal collection formed the nucleus of the National museum. After the confiscations of emigrants’ property the collection was enriched with war trophies from Cologne and Modena. The donations of the 19th century supplemented the panorama of the French school with the ensemble of Delacroix’s and Corot’s drawings collected by Etienne Moreau-Nelaton. Following the establishment of the d’Orsay Museum, the drawings of artists born after 1820 were placed under its jurisdiction, while remaining at the same time in their places in the Louvre. The consultation room, where visitors were received daily, was situated on the reconstructed landing of the ancient Sovereigns’ Staircase — the decoration of which, completed in 1871, is one of the most remarkable examples of palatial ornamentation of the epoch of Napoleon III.

In the history of European art artists’ journeys played at certain times a major role in cultural exchanges and enrichment of knowledge. But why would architects, sculptors and painters risk their lives to go and discover other places, other cultures?

Italy attracted artists in the 16th and 17th centuries. Rome, the capital of Christianity, was the main destination for pilgrims coming from all over Europe, and it was also the city of the ruins of the Roman Empire. From the end of the 15th century — thanks to works by Raphael, Michelangelo and Bramante — its artistic glory was enhanced with the fascination of practically complete collections of ancient sculptures. To understand antiquity, it became a must for visitors to study Laocoon’s sculptures, discovered in 1506 among the ruins of Nero’s Golden House, and to visit the Coliseum or the Arch of Septime Severe. Those who undertook the journey would bring back drawings, even engravings and paintings that supported the existing myth.

Painters from Northern Europe created in Italy the particular type of landscape for which they were highly appreciated in the second half of the 16th century, when Mathijs Bril was commissioned to paint frescoes at the Roman sites belonging to Vatican. In the 17th century a community of Flemish and Dutch artists — joined by those from the Lorraine such as Claude Gellee, and the French such as Poussin — furnished the galleries of Roman palaces with landscape paintings.

The institutionalization of education of French artists in Italy goes back to Colbert who created the French Academy in Rome during the reign of Louis XIV, the system that fully bore fruit in the 18th century with the works of Hubert Robert, Fragonard and then David. Rome was then a totally cosmopolitan city, a meeting place of the English on their Grand Tour, art patrons from all over Europe with artists following them, intellectuals passionate about numismatics and ancient texts, amateur archaeologists and collectors. Very soon the whole of Italy became a key tourist destination, and publishers of travel guides prospered. In 1769 “A Journey of a Frenchman to Italy” by Lalande was published; the author was partially inspired by yet unpublished letters of Charles de Brosses written during his journey in 1739. This literary vogue enabled the publication in 1774 of the “Travel Journal” by Montaigne, who visited the Tyrol and Italy in 1580-81.

Following the great maritime discoveries of the end of the 15th century perceptions of the world expanded, and geography together with cartography became more and more practically-applied sciences for merchants as well as diplomats. In fact, from the 17th century onwards scientific and diplomatic expeditions — in which artists were engaged to portray the sites visited and the customs encountered — were frequently organized on the initiative of rich individuals, like the journey of Willem Schellinks to the Mediterranean. Very often engravings were printed from the drawings brought from such expeditions, and their distribution helped to maintain the interest in travelling.

The expansion of archaeological excavations at the beginning of the 18th century gave rise to new centres of interest. The architects were drawn more and more to the origins of architecture, and discovered Greek art as they returned to ancient texts. Journeys to Greece became frequent: the British artists James Stuart and Nicholas Revett, and then the Frenchman Julien David le Roy drew the monuments of Athens. Shortly before that, the architect Soufflot, accompanying the young Abel Frangois Poisson de Vandieres, the future Marquis of Marigny, Superintendant of the Buildings of Louis XV, had discovered the ancient temples of Paestum. It was the beginning of a fashion, an “a la Greek” style which reigned in graphic art and architecture in France around 1760, before giving birth to neoclassicism.

However, any such discoveries of new horizons required financing — and thus the number of such expeditions to Sicily, Greece and the Oriental parts of the Mediterranean was quite limited. In this respect, the journey of Liotard is exemplary: he accompanied English aristocrats and managed to reach Constantinople. Numerous sketches brought back by the artist display an interest in the characters he encountered and had contact with. Houël strove to attain more scientific goals in Sicily, where he sought to describe natural phenomena as well as ancient monuments.

With Napoleon’s conquests, the horizon broadened in a unique and definite manner. The Egyptian campaign opened the way to Egyptian archaeology and a certain interest in yet unexplored territories.

Around 1830 one would meet fewer travellers in the French countryside where the artists recruited by Baron Taylor worked, than on the Oriental coasts of the Mediterranean. Several of the pieces shown serve as evidence of that: Dauzats, Papety, Montfort, and Merimee went to Alexandria, Greece, and Palestine. Their travel was not very comfortable, as Merimee humourously recounted in his correspondence: fleas raged, one could be attacked by dogs, dysentery threatened. The experience of the journey to Morocco by Delacroix would leave a lasting mark on the artist.

While the frontiers of the known world broadened, there remained at the beginning of the 19th century an area still partly unexplored — the French provinces. Some would discover the beauty of the coasts of the West of France, following Bonington. There was a growing interest in medieval remains that the French revolution had not destroyed. As Victor Hugo wrote in 1825 in his pamphlet “War on the Demolishers”: “If things go on in this way for much longer, there will remain in France no other national monument than that of ‘Picturesque and Romantic Journeys’ in which grace, imagination and poetry rival the pencil of Taylor and the quill of Ch. Nodier... ” In fact, it was time to intervene to save Roman and Romanesque, as well as Gothic monuments in France. Certain buildings drawn at that time by artists with such diligence and passion disappeared during the two world wars of 1914-1918 and 1939-1945, so we are even more indebted to the work of these pioneers.

Although artists didn’t travel more than other categories of the European population, their role in the general perception of different cultures was essential. During their trips drawing was an essential instrument, as testified by many sketch albums, and these sheets carry the mark of real sensations experienced by the artists. It is no wonder that their natural curiosity and lively and spontaneous artistic testimonies encouraged tolerance and humanism — at all times the artist has served as a catalyst for such non-verbalized aspirations.

Louis Nicolas van BLARENBERGHE (Lille, 1716 Fontainebleau, 1794) The Entry of Louis XV into the Town of Mons, May 30 1747
Italian pencil, watercolour with highlights of gouache. The Louvre Museum 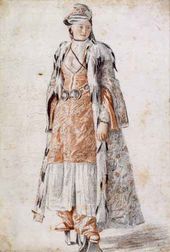 Jean-Etienne LIOTARD (Geneva, 1702-1789). A Lady of Constantinople, Wearing Bath Sandals, at the Entrance of a Hammam
Italian pencil and sanguine. The Louvre Museum

Eugene DELACROIX (Saint-Maurice, 1798 - Paris, 1863). A Young Arab in His Apartment
Рencil and watercolour. The Louvre Museum