Kari Huhtamo: The Pure Joy of Meditation and Comprehension

The Finnish sculptor Kari Huhtamo is a versatile artist endowed with an inexhaustible gift for creation. Paradoxical though it may seem, for many years his artwork aroused very different reactions from viewers. Indeed, his vast body of work often makes one feel that there is no single definition to be found that could embrace his art in its entirety. Huhtamo has been counted among the Pop artists, Dadaists, Surrealists, Constructivists, and Kinetic Sculptors. His works are distinguished by mild humour, as well as a glacial elegance crystallized in refined sculptural forms which seem to epitomize the energy of motion. Although one can hardly doubt that Kari Huhtamo is a bona fide Modernist, his works are evidence that an artist can preserve his individuality even amidst the powerful currents of Modernism.

In Autumn 2009 the Tretyakov Gallery will host Huhtamo’s solo-exhibition “Variatio Arctica Sculptura” at its two main venues - at Krymsky Val and at the Tolmachi Exhibition Hall. It will be the first presentation of artworks of the leading Finnish artist in Russia.
Kari Huhtamo was born in 1943 in Rovaniemi, the capital city of the Lapland Province, a region on the border of the Arctic Circle. In Rovaniemi in summer the sun never sets, and in winter, never rises, but the air there is clean and trees are few. Here, visually and mentally, it is possible to be carried very far away.

At the same time, Rovaniemi is a city that was burnt to the ground by retreating German troops towards the end of World War II in 1944. Huhtamo was a child when Rovaniemi was being rebuilt, so there is nothing surprising about the fact that he was commissioned as the artist for the “Monument to the Reconstruction of Lapland in 1945-1955”, now displayed in Rovaniemi. The skyward looking steel object, made in 1977, won Huhtamo recognition as a Finnish avant-garde sculptor, and the reputation of a reformer of monumental sculpture.

Huhtamo’s sculptures seem to be soaked in the discreet charm of the vast tracts of Lapland’s spare scenery. The neat lines of his sculptures echo the majestic unforested hills and their mirror images in the calm smooth surface of the region’s lakes. The harsh natural surroundings and seasonal contrasts are reflected in Huhtamo’s uncompromising stand, which is something he shares in common with other Finns: in the Northern country winning one’s bread has always been difficult, and people never give up. And the monument to the region’s revival, which, at the time it was created, seemed the most radical monumental sculpture in Finland, shows that the people of Rovaniemi do not live by the past alone. They normally look into the future.

In the early 1960s Huhtamo moved to Helsinki, where he studied art. At the Helsinki School of Industrial Art, as well as at the School of the Art Academy of Finland, he was mentored by the best teachers of the time: the classic of design Kaj Franck and the superb sculptors Kain Tapper, Heikki Haivaoja, Oskari Jauhiainen. After graduation Huhtamo visited Italy and France in 1968, Europe’s “crazed” year: these trips connected him to the world of modern art.

At his show in the “Kluuvi” gallery in Helsinki in 1969, which was a huge success, Huhtamo displayed alongside his sculptures large photo collages imaging his creations in an urban setting, and one object — in accordance with the spirit of the times — was even placed in space!

The approach to an artist’s work demonstrated at that exhibition was completely novel for Finnish art. Doing away with the notion of a sculptor as a hermit secluded in his studio, Huhtamo enlisted for the show the services of dozens of professionals from different fields.

Perhaps it is Lapland’s sharp seasonal contrasts that make Huhtamo’s art what it is. However, his art is never limited to traditional bi-polar duality; instead, it embraces many notions that somehow or other conflict with one another.

The poetic intensity characteristic of his sculptures is brought about by the marriage of four elements: the language of form, bespeaking an organic nature; highly focused self-expression; cold materials; and execution involving the use of the most advanced technologies.

In spite of the application of industrial materials and the mathematic precision of his forms, Huhtamo’s works bring to mind, first of all, the organic architecture of nature itself, whose main principles include a repetitiveness of certain elements, symmetry and practicability.

Often his sculptures resemble giant seeds, or seedpods burst open, which appear as if they have been brought to the Earth from outer space, from different planets, where stainless steel is replaced with chlorophyll and flowers never fade away.

Huhtamo’s sculptures bring the viewer’s attention back to the natural settings of the world around us: to the sun which hides behind trees in a summer evening, or to the first cold spells in autumn, or to a smooth water surface that overnight is skinned over with a thin ice crust reflecting a dim light.

These fleeting sensations, which Huhtamo has captured with his video camera as well, have been becoming more and more important for him in recent years. Starting from the 1990s, Huhtamo has been making use of a “studio in the In the late 1980s he added motion to his expressive vocabulary. Later Huhtamo created a number of giant mobile pieces (mobiles), which were movable and, in spite of their size and weight, appeared nearly immaterial. In the words of the architect Kirmo Mikkola, these pieces “glisten like a salmon’s flank, like a butterfly’s wing”.

It is the organic base of the form and the framework, together with the emotional impact, that distinguish Huhtamo’s works from the geometric neatness of Constructivism. They fill them with the external creative energy of the objects themselves, and this, in turn, prevents the sculptures from being confined to pure Modernism.

For Huhtamo steel is the most important material, at least for the final finishing of his works. He uses acid-proof stainless steel, preferring the grades whose surface can be burnished into a mirror-like shine. The reason behind the preference for steel is simple: “I want for my sculptures an absolutely perfect surface, and there is no other way to ensure it,” says the sculptor.

Cut up as if by a knife, buffed to full gloss, and sensitive to any exterior irritant, the steel, at first glance, appears as if it exists outside time and historical context. It seems to mirror nothing but the unremitting and never-ending moment of the “now”. And yet, the steel provokes mental associations related both to the history of culture and our everyday experience.

Huhtamo’s art reflects the tradition of Modernist modeling, such as it was at the turn of the millennium — the sculptures created in this vein seem to have some common features. The most conspicuous shared features include the way of constructing art objects instead of traditional sculpting or chiseling, and the condensing of a form to a single conceptually indivisible unit.

Other shared traits include rejection of statues imaging humans as an ideal sculpture. The late Modernist sculptures do not emulate the achievements of antique sculpture, but rather search for themselves within their time and their natural forms, materials and processes. Such sculpture can be massive without being a monument. This is a holistic sensation which has stepped down from the pedestal into the space shared with the viewer.

The shared traits also include the language of form free of excessive detailing, and the execution that heeds the specific quality of the material used.

Huhtamo makes considerable use of industrial technologies; this is why his works have a “non-man-made,” cosmic look. Although Huhtamo’s sculptures bespeak the influence of Modernist artists of the 1900s and the barebones works of Minimalists who followed in their footsteps in the late 20th century, they still show that the sculptor distances himself from both tendencies and achieves a perfect purity of the art object, which, to quote Robert Morris, creates “a maximum resistance to perceptual separation”.

Huhtamo’s works never reference themselves, or the story of their creation. They have the faculty of bringing into play the most diverse chains of association and so can appreciably enlarge their creative base. This base is their pool of strength and the source of their power to throw the viewer off balance, again and again — the power indispensable for an artist such as Huhtamo. Time does not corrode stainless steel, nor does it seem to corrode his sculptures. They do not always lend themselves to immediate apprehension — instead, you can watch them for hours.

Huhtamo usually sketches his works by hand, and elaborates them on a computer. In many cases, Huhtamo’s adumbrations are scissored paper cutouts, which he then fleshes out on a drafting desk. While working the outlines of his future sculptures into a final, perfect shape, he puts together photo collages and creates animations featuring the works in the making in an ideal space full of light and free of time, place, weight of the material or precise size. In this way, he can gauge the main parameters of his pieces before the production stage and accurately estimate the proportion between their size and the space around.

This modeling is not of the sort that gets accomplished in the quiet privacy of an artist’s studio. The final finishing stage calls for first-class workrooms and the labour input of many relevant professionals.

This requires from the artist the faculty to walk along the edge of a craft where the impossible becomes the possible. Huhtamo’s computer stores in its memory outlines of projects that cannot be realized before the necessary technologies are in place.

Huhtamo’s art provides employment for a considerable group of professionals in different fields, from metal grinders to computer programmers and various other collaborators. Yet, technical perfection is not an end in itself for the artist.

The production of his sculptures, remarkable for their architectonic precision, involves the use of most advanced technologies, and yet the viewer’s attention gets easily drawn away from the objects themselves to the physical and, also, spiritual space that materializes around them.

Cold steel becomes warmer when it morphs into the smooth and sensuous curves typical of Huhtamo’s art. The heavy weight of the object dematerializes and the material loses its heft, when the stream of light gets split, reflected and multiplied in the apertures and grids in the steel facade and creates around it the ever changing lacework of light and dark. Huhtamo’s art captivates like a beautiful and rare natural occurrence — for instance, ice melting under the Spring sun or a salmon emerging from river rapids. Ultimately, the moments spent beside his sculptures become filled with the pure joy of meditation and comprehension. 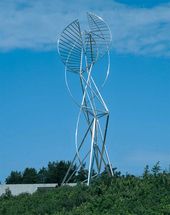 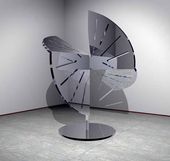 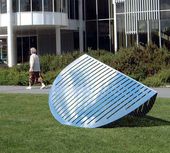