A Chronicle of Exhibitions at the Russian Academy of Arts

The first six months of the year saw a most impressive array of exhibitions of acclaimed contemporary Russian artists at the Russian Academy of Arts venue on Prechistenka Street in Moscow.

In late 2008-early 2009 the Academy hosted a show of the People's Artist of the USSR Nikolai Zhukov, dedicated to the centenary of this superb graphic artist and illustrator. A veteran of World War II, he attended the Nuremberg trial, where he conceived an idea for his unique series of 250 drawings, which was to become a priceless historical art work. His “Defend Moscow!” poster, produced in 1941, is recognized as a classic piece of Soviet poster art. Alongside brilliant sketches from nature, illustrations and posters, the show also featured Zhukov’s landscapes, astonishing in the vividness of their colours and freshness of approach.

Next followed a show of two artists from St. Petersburg — Vladimir Vetrogonsky (1923-2002), a People’s Artist of Russia and full member of the Russian Academy of Arts, and his son, Andrei Vetrogonsky, a painter and graphic artist.

Vladimir Vetrogonsky was a wonderful, superbly skilled engraver, water-colourist and graphic artist. A graduate of the Repin Institute of Painting, Sculpture and Architecture in Leningrad, where he studied under the famous artist and art educator Alexei Pakhomov, Vetrogonsky learned the best traditions of the Leningrad school of drawing and enriched them with his own creative discoveries and a new content. He portrayed with unmatched skillfulness life in the post- WW II USSR. This body of work includes several series of linocuts and lithographs such as “Weekdays at the Plant”, “Cherepovets Steelworks (Magnitka of the North)”, and “Komsomol (Young Communist League) Construction Site”.

Vladimir Vetrogonsky always worked from nature, so his pieces are marked by sharp insights into reality, a truthful attitude to life, special poetic overtones of the imagery in the genre scenes and landscapes. The master’s water-colours reveal his outstanding talent and are marked by astonishing visual qualities, lucidity and depth, and versatility of emotion. For more than 50 years Vetrogonsky taught at the institute from which he graduated in 1951; he was a distinguished professor, headed a workshop, and chaired a faculty. One of the leaders of the generation of the 1960s, a romantic mind, a person obsessed with art, Vladimir Vetrogonsky passed to his son a loyalty to the sublime ideals of art, respect for traditions, unselfishness and love for work, all of which is clearly seen in the works of Andrei Vetrogonsky, showcased at the Academy side by side with his father’s masterpieces.

In March, the Academy opened “From the History of Manned Space Flight” — an exhibition by the full member of the Russian Academy of Arts Yury Kopeiko, dedicated to his 75th anniversary. In 1959 Kopeiko graduated from the Moscow Printing College, where he was mentored by the outstanding Russian artist and art teacher Andrei Goncharov and the excellent graphic artists Pavel Zakharov and Gleb Goroshchenko. Prior to the 1970s Kopeiko worked productively as a book illustrator, designing more than 100 Russian and international literary works. The artist was keen on themes and subjects relating to mankind’s perpetual interest in the Universe, and in the innovation and fantasy that fuel the progress of science and technology. His works are full of “real-life romanticism”, a quality that they share with the pictures of Vladimir Vetrogonsky and many other Soviet artists of the 1960s and 1970s. A superb graphic artist and water-colourist, Kopeiko took on oil painting in the 1970s. In recent years, he created a series of 25 paintings vividly and convincingly imaging the main events in the history of space exploration. Kopeiko, who many times visited the Baikonur Cosmodrome and witnessed the launch of rocket vehicles, made numerous sketches and croquis which he later developed into major paintings, such as “Ahead!”, “Flight is Finished”, “See You Later”, “Snowstorm” and others... The Moscow art critic Mikhail Lazarev wrote about these and earlier works of the artist: “His paintings are in fact a diary suffused with lyrical and philosophical overtones”. The famous critic’s remark fully corresponds to Kopeiko’s professional culture and the context of his pieces, as well as the way they are perceived by viewers. The artist’s creative activities range from illustrations to children’s books, from lyrical landscapes of Russian nature to genre paintings.

Another landmark Moscow exhibition was a retrospective of Boris Nemensky, a People’s Artist of Russia, winner of the state prizes of the USSR and Russian Federation, associate member of the Russian Academy of Arts and full member of the Russian Academy of Education, and a distinguished professor. The show featured more than 100 paintings and drawings from the Tretyakov Gallery and private collections, as well as works belonging to the artist himself. Nemensky was born in Moscow in 1922; in 1942 he graduated from the Saratov Art College, and in 1952 from the Surikov Art Institute. His art has always combined two elements — the dramatic and the lyrical, which mutually complement each other and enrich the artist’s range of images. Nemensky’s war-themed pieces such as “Mashenka”, “The Breath of Spring”, “Unnamed Hill”, and “Scorched Earth” are very well known. They convey the pain of losses and suffering, the valour and courage of the victor nation, the life stories of ordinary people who have gone through many trials but preserved a spiritual nobility and moral beauty.

Conscripted into the Red Army in 1942, Boris Nemensky was attached to Mitrofan Grekov’s military artists’ unit; he fought in the battles of the war, took part in the Oder offensive and the assault on Berlin. The artist depicted the events of the times in sketches from nature and croquis accomplished during brief respites between battles — these pictures became priceless historical documents, and the paintings became a content-rich, vivid chronicle of struggle and victories, of war and peace. About one of his most significant paintings Boris Nemensky would say: “I wanted viewers of ‘Scorched Earth’ to see the soldiers amidst this hell, at the bottom of the trench. And seeing them, to fully feel the fatigue and the fortitude of these people, who have been scorched like the earth itself.” And indeed the artist succeeds in condensing separate facts and events into sublime imagery. The patriotic artwork of Boris Nemensky is marked by a fine professional culture, distinct style, and the philosophical depths of his worldview.

A different artistic environment shaped the art of Vadim Kulakov, a People’s Artist of Russia and full member of the Russian Academy of Arts. His personal show at the Academy, for the first time, features his statues alongside his paintings and drawings.

A graduate of the Surikov Art Institute, he studied under such prominent Russian artists as Mikhail Kurilko, Pavel Sokolov-Skalya, Alexander Deineka, and Mikhail Kurilko-Rumin. Soon after he finished the Institute, Kulakov made a name for himself as an outstanding muralist. Even the first mural, titled “Theatre”, designed by the young artist for a Soviet stand at a world fair in Montreal, demonstrated these qualities in a vivid, impressive pictorial and spatial form. Since then he has accomplished more than 20 decor design projects, including a comprehensive design of the decor for the Tomsk university academic library, mosaics at the Ryazan puppet theatre, murals, reliefs and Florentine mosaics for the President Hotel in Moscow, mosaics for the Maloe Voznesenie Church on Bolshaya Nikitskaya Street in Moscow, and murals for the Saratov opera and ballet theatre. In recent years the artist has created an impressive body of work including paintings, drawings and statues. His artwork is marked by the variety of its colour schemes, ornamental brightness, and a seamless combination of real-life experiences, fantasy and grotesque. His pictures are a kaleidoscope of colours as well as a holistic, harmonious imagined world full of associations.

Alongside this brief review of exhibitions, special mention should be made about the shows of the painter and poster artist Oleg Mikhailovich Savostuk and the sculptor Anatoly Bichukov — both People’s Artists, academicians, winners of national and international prizes and distinguished professors; essays on their art were published in the previous issue of this magazine.

And finally mention of the exhibition which took place in June and July 2009 of a magnificent painter, Oleg Vukolov, well known both in Russia and internationally, is much deserved. A People’s Artist of Russia and full member of the Russian Academy of Arts, his metaphorical pictures have won a cult status among modern art lovers. A fine colourist and excellent graphic artist, he demonstrated once again his consummate professional culture and complex vision of the world as seen through seemingly simple objects of everyday life. According to the critic Vitaly Patsukov, “the great circular flow of history and culture is acted out in the structure of Oleg Vukolov’s art itself, in the organization of his sculptural musings, in their determined simplification”.

The regular academic shows demonstrate the continuity of the great traditions and artistic characters whose works have become milestones of our multi-ethnic art, and are a good example for Russian young artists to look up to.

Andrei VETROGONSKY. The River and the Fisherman. 2004
Oil on hardboard 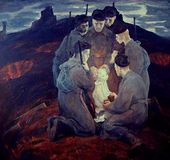 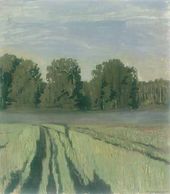 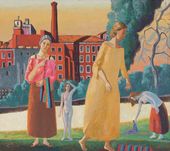 Vadim KULAKOV. An Old Factory in Pereslavl-Zalessky. 2008
Oil on canvas 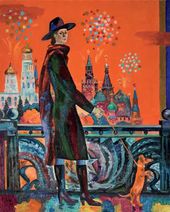 Oleg SAVOSTIUK. Lady with a Lap-dog on a Festival Day. 2009
Oil on canvas 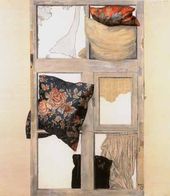 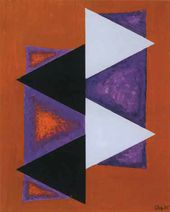