CAN THE FUTURE BE DEFEATED?

When the doors of the Giardini were opened for journalists on the first day of the 53rd Biennale of Venice, where traditionally the national pavilions present their artists, nearly all writers and photographers hurried, passing the pavilions of Switzerland, Venezuela, Russia, Japan and Germany to the British Pavilion, to take a place in a quickly growing queue... It was like in bad times, when there was something free on offer - this time tickets for a 30-minutes film by Steve McQueen. The number of visitors was limited, therefore one had to wait for days, if not following the queue.

The Biennale of Venice grows and with it the number of journalists, gallerists and artists, who pass the control of accreditation. Already for a long time the biennale has expanded over the lagoon-town, has occupied churches, palaces, galleries and boutiques with innumerable small exhibitions. This time they are called “collateral events”, a word which is only used negatively in German. The sporting element of the Biennale forces the visitor after the sprint to the British Pavilion to a marathon-walk through a huge number of exhibitions.

This year the Biennale of Venice has the title “Fare Mondi” (Making Worlds), a proposal of the Swedish Daniel Birnbaum, Rector of the Staedelschule in Frankfurt and Director of Visual Arts Section in Venice. This exhibition theme was gladly accepted by probably all curators, because it opens free ways to fantasy and connects the present and the future. But it contains also the major potential of striving towards harmony, because future worlds should be free of conflicts, they are an extreme contrary to our present with its political and economic crises.

Consequently nearly no national or collateral show is occupied with the problems of our time, except the mystical dark “Collisions” in the Luxembourg Pavilion. On the long way through the exhibitions the hope of the visitor to find a show which offers more than cultivated boredom decreases, as, for example, in the German Pavilion (Liam Gillick) — the confrontation of a kitchen arrangement of 1926 to the later NS-architecture of the pavilion.

A little bit more provocative is the French Pavilion which shows a crossing of grating ways, like for wild animals or for Guatanamo-prisoners (Claude Leveque); it awakes conflicting feelings. To call this installation “The Great Evening” — “Le Grand Soir” — is a contradiction with a minimal, but effective indication of national pathos, when in a video a flag flutters at the end of each grating way like on the stern of a boat.

In the biennale Russian art is the strongest presentation numerically, but also in the quality of describing problems of the given theme. In the Russian Pavilion curator Olga Sviblova uses fully the variety of rooms and their multimedial possibilities. The exhibition is called “Victory Over The Future”, a title not without irony, especially because in the last century the bright future — as everybody knows — was hardly the winner on more than one occasion. (It can be assumed that the majority of international viewers were slow to catch the allusion to the futuristic opera “Victory Over the Sun” by Mikhail Matyushin and Alexei Kruchenikh, an association immediately obvious to Russians). Some works recall this: it seems that Andrei Molodkin goes back more far than any others, when he puts together two big glass-versions of the Nike of Samothrace, fills them with red and black colours — blood and oil — quoting Stendhal and combines both figures by video-fade, to evoke the connection of the two powers for life.

Anatoly Shuravlev covers the walls of his room with informal patches which have in their centre an only one cm sqr. photo portrait of a person, who has promoted the development of mankind — as, for example, Mahatma Ghandi.

Pavel Pepperstein is the farthest reaching with his large series of drawings, highly estimated by the public. Episodically he transfers the habits of the past — memorials, honours, holidays — to the next 2,000 years, thus presenting an amusing reflection of our over-estimating ourselves. The music of Igor Stravinsky increases the ironical effects of this show.

Victory over the future means each weekend victory over football opponents and possible demonstrators, as Alexei Kallima shows in his refined pictures, which can be seen only in ultra-violet light. In the colourful fountain of table-cloth by Ira Korina, there is another interpretation of the exhibition theme: the future demands the latest and the newest. At the end Gosha Ostretsov hints in his space-installations full of materials, that especially thinking, writing and drawing will bring the victory. On the outside-wall of the Pavilion Sergei Shekhovtsov has fitted a relief of a motorcyclist, who breaks through walls (those of history?), leaving the past behind and speeds into the future.

Of course, art is still considered “obscure”, as the exhibition in the Palazzo Rezzonico shows: it is a pointed view back to 30 years, to actual and avant-garde art, uniting such artists as Yury Albert, Ilya und Emilia Kabakov, Vitaly Komar and Alexander Melamid, Boris Orlov, Alexander Ponomarev, Vadim Zakharov and others. It has not avoided the disadvantage of all such surveys: that a single work says much about itself, but only little about its author.

On that question, the artists in the Arsenales have a better chance, because they can show more works. In this hectic chaos of space — and ceiling-installations — Elena Yelagina and Igor Makarevich keep quiet, although their works occupy some space, too. The artist pair combine a line of prints of reproductions with their subjective, individual, handwritten comments. Their objects — a Tatlin version and an eagle variation — function like monuments and remind of the past, especially in case of the board with bread. One can make out history and the artists’ own identity as motifs which will develop into ballast in the future.

Anna Parkina, the youngest of the Russian participants, shows two parts of her work: first, sculptures with a multitude of outlines, internal spaces and perspectives, creating new insights when the visitor changes his position; and, second, an archive of her own — yet short — past as books and booklets presented in showcasesю

In Venice all vaporetto-users are surprised by the submarine of Alexander Ponomarev which is lying in front of Ca’ Foscari — a colourful painted warship amidst the peaceful Grand Canal, a work with many allusions. Ponomarev himself refers to Leonardo da Vinci and his inventions, and to his own past with a large number of drawings of this theme. But there is more: the contrast between the strong structures of the architecture and the simplicity, even inconspicuous form of the boat, which becomes an attraction because of its being decorated. This set of contrasts can be extended to political matters. In any case the installation of Alexander Ponomarev stands for the motto of the bienniale, “Making worlds”: The art is ahead of time. But in the Palazzo Bollani Vladimir Dubossarsky and Alexander Vinogradov remind of the fate of all art — “Attention! Museum”, where the art will one day be covered by the dust of history…

In this overview there is no consideration of the no less exciting presentations of Ukraine, where the Pinchuk Art Centre’s director Eckart Schneider, Illya Chichkan and Mihara Yasuhiro have made a nearly disrespectful installation in the old Palazzo Papadopoli, nor to the presentations of the Baltic countries where above all the videos “After-War” of Kristina Norman shows several conflicts around the war memorial in Tallinn with the intention to think about patriotic feelings and ideological estimations.

The Central Asian neighbours are presented with strong photo-series, too. The visit-tour in the Arsenale Novissimo, meeting two huge installations of Jan Fabre, which alone are worth to go that far, ends at least in the international exhibition “Unconditional Love”, the backbone of which is Russian artists once again, above all the panorama-installation of the new video by AES+F (Tatyana Arzamasova, Lev Evzovich, Evgeny Svyatsky, and Vladimir Fridkes). Besides this there are exhibited video-loops by Aristarkh Chernyshev, serigraphs by Velena Nikova and metal- and glass-beads by Olga Soldatova, and last but not least the “Execution Chair of Love” by Vadim Zakharov.

In the confusing variety of the videopresentations at the biennale two works stand out: “The Feast of Trimalchio” 2009, of AES+F and the video by Steve McQueen in the British Pavilion. The last was the favourite of nearly all visitors. The differences between the two could not been greater.

“The Feast of Trimalchio” is shown in a polygon panorama, so it is not possible to catch everything from one place. The feast, taken from the Ancient World and transferred to modern times, has no continuous story but is separated into several episodic sections. There is no speaking: dramatic music underlines the contents full of banal gestures and minimal actions which seems to be of importance. The visitor expects to see episodes of the feast, but instead, he sees only gestures, facial expressions, slow movements without being able to understand their sense.

Each individual experiences such seemingly emotional behaviour with permanent repeating absence of sense — and that is really the intention, because it shows a multi-layered society: people who are similar by expressions, are distinguished by clothes into groups, although they are mixed at the end. All of them express emptiness. And this impressive demonstration of the emptiness during over-crowded parties and meetings causes the polar opposite opinions about the AES+F videos and makes them so successful.

Steve McQueen abstains from human beings in his film presented at the bienniale. Only in the last third part a white man appears and then a coloured man. They go against each other — a quarrel is expected — but they kiss each other and divide. In the other 25 minutes of the video the author shows the Giardini in the times without exhibitions, when only a few dogs seek for food in front of the pavilions. Emptiness is the theme here, too; the absence of people provokes it — but the atmosphere is filled with the mood of the garden and the music. The aspect of the future is obvious: after the Biennale the Giardini will fall into its agony, and society will continue with its poses, farces and emotions at home.

The “Golden Lion” was given to the American master Bruce Nauman; nobody can say anything against this decision, although not the future, but the past was celebrated.

Tobias Rehberger received the other “Golden Lion” for his transformation of the Biennale cafe which now became a mirror of the confusing variety of the 53rd bienniale. Confusing variety has always been an aspect of the future. 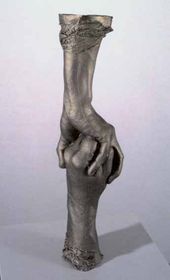 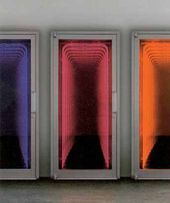 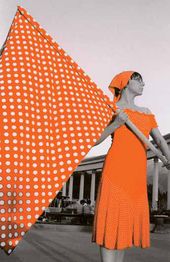 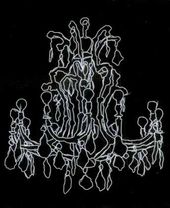 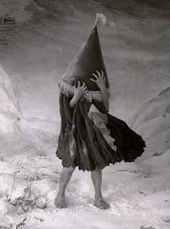 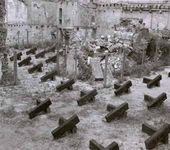 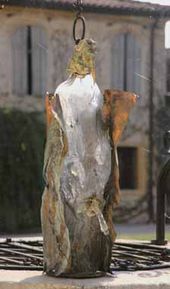 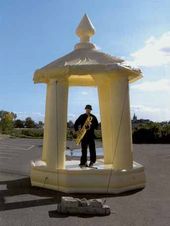 Gosha OSTRETSOV. Art Life or The Torments of Creation. 2009
Sketch for installation Collection of the Artist Courtesy of Multimedia Art Museum, Moscow