AUGUSTUS SAINT-GAUDENS IN THE METROPOLITAN MUSEUM OF ART

Augustus Saint-Gaudens (1848-1907) was the foremost American sculptor of the late 19th century. From humble roots, through his prodigious talent, he rose in society, eventually counting some of America’s most influential figures in art and literature, diplomacy and economics, technology and social policy among his friends and patrons. The exhibition “Augustus Saint-Gaudens in The Metropolitan Museum of Art”, on view at The Metropolitan Museum of Art from 30 June through 15 November 2009, draws from the Museum’s collection of nearly four dozen works by the accomplished artist, many of which were acquired directly from the sculptor or from his widow, soon after his death in 1907. Organized thematically within a chronological framework, the exhibition charts his illustrious career with works representing the entire range of his oeuvre, from early cameos to innovative painterly bas-reliefs, to character-penetrating portrait busts and statuettes derived from his public monuments.

Bom in Dublin to an Irish mother and French father, Saint-Gaudens arrived in the United States in 1848, still in his infancy. The family settled in New York City where Saint-Gaudens’s father established a fashionable shoe and boot shop. Saint-Gaudens attended public schools in Manhattan until the age of 13 when he began his training in the plastic arts through successive apprenticeships in the studios of two French emigre cameo cutters. The earliest work in the exhibition — a convincingly rendered shell cameo portrait of a New York attorney, John G. Tuffs, from around 1861 — already suggests the young artist’s skill. He excelled at the exacting task of cutting cameos and, in years to come, would apply his talent for working in low relief to modeling portraits in clay, expertly capturing even the most subtle details. Continuing his apprenticeship through his teenage years, he rounded-out his education with art classes at the Cooper Union and the National Academy of Design.

In 1867 he set off for Paris, becoming one of the first American artists to study there. Prior to the American Civil War, American sculptors typically studied in Italy but Saint-Gaudens’s command of the French language, which he learned from his father, made Paris an obvious choice. His decision to train there coincided with a change in policy allowing foreign students to enroll at the prestigious Ecole des Beaux-Arts, where he was admitted in 1868, having spent his first year in France studying at the Ecole gratuite de Dessin.

In 1870, following the outbreak of the Franco-Prussian War, Saint-Gaudens traveled to Limoges before settling in Rome where he set up a studio in the gardens of the Palazzo Barberini. To support himself he carved cameos as well as copies of antique busts that were purchased as souvenirs by Americans on the Grand Tour. As he began to attract a circle of American patrons, he created his first full-length marble sculpture, “Hiawatha” (modeled 1871-1872, carved 1874). An ambitious Native American subject inspired by Henry Wadsworth Longfellow’s poem of the same name, “Hiawatha” shows the extent to which Saint-Gaudens was influenced by the neoclassical tradition in Rome. The young sculptor vowed to “astonish the world”, and, indeed, he sold this unique statue to Edwin D. Morgan, a former governor of New York. “Hiawatha” now stands, along with four other large-scale works by the artist, in the Metropolitan’s newly renovated Charles Engelhard Court, through which one enters the exhibition.

In the early 1870s Saint-Gaudens continued to establish a reputation, taking on an eclectic array of projects — from painting murals for Boston’s Trinity Church to modeling designs for silver produced by Tiffany & Co. His career took a major turn in 1877 when he was awarded the commission for a monument to Admiral David Glasgow Farragut (1881, Madison Square Park, Manhattan). His first commission for a public statue, the Farragut was of great personal consequences to the sculptor, providing him with the financial security to marry Augusta Homer to whom he had been engaged since April 1874, but the Farragut also turned out to be a milestone for American art. The Civil War naval hero stands as if on the prow of a ship, his hair and coat swept up by the wind, his weather-beaten face turned to his left as he fixes his gaze on a distant point. Lauded for its naturalism and immediacy it departed from the neoclassical style that had dominated American sculpture thus far and ushered in a new aesthetic for late 19th-century civic sculpture. The monument was also praised for its innovative pedestal and base, which were designed by noted architect Stanford White, with whom Saint-Gaudens collaborated on numerous other projects. Consisting of a stone exedra carved with allegorical female figures and decorative elements, the ensemble integrated the statue with its environment, introducing to the American public a radically new presentation for a public statue. The exhibition features a 1910 bronze bust of Farragut cast from Saint-Gaudens’s 1879-1880 study for the full-scale statue.

The success of the Farragut Monument positioned Saint-Gaudens as the leading sculptor of monuments in the United States. Indeed, he would receive some 20 commissions for public monuments in the remaining three decades of his career. A number of these are represented in the exhibition by smaller works, such as busts excerpted from the full-scale figure, reductions, or casts after early studies. For example, on display is a bronze “Head of Lincoln” excerpted from Saint-Gaudens’s monument to Abraham Lincoln (1887, Lincoln Park, Chicago), as well as a life mask and casts of Lincoln’s hands which served as reference points for Saint-Gaudens’s larger than life figure of America’s sixteenth president. Deacon Samuel Chapin (1887, Merrick Park, Springfield, Massachusetts), a monument erected in honor of one of Springfield’s earliest settlers, is represented in the exhibition by a bronze statuette known as “The Puritan”. A reduction of the monument, this statuette shows a figure in period dress carrying a Bible and striding with a knotty walking stick across the pine-strewn New England wilderness. Seizing on the popular appeal of the subject, Saint-Gaudens issued a large edition of reductions of “The Puritan”, taking care to distinguish each cast by changing the patina or modifying the angle of the figure’s hat and walking stick.

“Diana”, an eighteen-foot-tall, gilt sheet-copper weathervane that Saint-Gaudens designed for the tower of Stanford White’s Madison Square Garden is referenced by several objects in the exhibition. In addition to a plaster portrait of Davida Johnson Clark, Saint-Gaudens’s model and mistress who was an inspiration for his “Diana”, the exhibition features several reductions of the goddess drawing her bow, including a six-and-a-half-foot gilt-bronze version (modeled 1893-1894, cast 1928) that has long been the centrepiece of the Engelhard Court.

The exhibition also addresses Saint-Gaudens’s last major work, the “Sherman Monument” (1903, Grand Army Plaza, Manhattan). A gilded-bronze equestrian statue that rates among Manhattan’s finest public sculptures, it displays the Civil War general William Tecumseh Sherman on his horse led by a winged allegorical figure, Victory, who wears a laurel crown and carries a palm leaf. Inspired by the Nike of Samothrace in the Louvre, this Americanized Victory wears a classicized gown emblazoned with an eagle. The exhibition features three works that relate to this project: a bronze bust of General Sherman modeled from life (1888, cast 1910); a bronze head of Victory (1897-1903, cast 1907); and the gilt-bronze statuette “Victory” (1892—1903, cast 1914 or after [by 1916]), reduced after the full-sized figure.

In addition to these many commissions for public monuments, Saint-Gaudens also sculpted numerous private works. The most elaborate of these was his massive marble, mosaic, and cast-iron mantelpiece from the mansion of Cornelius Vanderbilt II (1881-1883), on view in the Charles Engelhard Court. Among other elements, Saint-Gaudens designed the two arresting classical caryatids Amor (Love) and Pax (Peace) that support the entablature with their heads and upturned arms. The caryatids are the first appearance of the ethereal female figure that would become a recurring image in Saint-Gaudens’s later work, culminating in the gilded bronze “Amor Caritas” (1880-1898, cast 1918). In addition to such decorative arts projects, in the late 1870s and early 1880s he modeled dozens of relief portraits that were rendered in bronze and marble for friends and patrons. Included in the exhibition are bronze bas-reliefs of the architect Charles F. McKim (1878); the artist and writer Francis David Millet (1879); two-year-old Rodman de Kay Gilder (1879), son of the poet and writer Richard Watson Gilder; bronze portraits of the author Robert Louis Stevenson (modeled 18871888, cast 1898 and 1910); Samuel Gray Ward (modeled 1881, cast 1908), a founder and the first treasurer of the Metropolitan Museum; and a marble portrait of Mrs. Stanford White (modeled 1884, carved by 1888) in her wedding dress.

Over the course of his career, Saint-Gaudens regularly worked in Paris and New York but his studio and home in Cornish, New Hampshire, where he permanently settled in 1900, was the place which held the most significance for him. Amidst the rolling hills of rural New England, Aspet, as the estate was called became the focal point for a thriving artists’ colony; today it operates as the Saint-Gaudens National Historic Site, open seasonally with displays of Saint-Gaudens’s work in various media.

By the time of his death in 1907, which followed a prolonged battle against cancer, Saint-Gaudens had risen to become the unequivocal authority in his field. A master sculptor, he had taken on the mantle of tastemaker and his input was solicited for a range of artistic undertakings, from the Chicago World’s Columbian Exposition mounted in 1893, to the McMillan Commission charged with redesigning Washington, DC in 1902, to the founding of the American Academy in Rome in 1905. A testament to the admiration he drew from artists worldwide, the exhibition closes with portraits of Saint-Gaudens, including two etchings by Anders Zorn (1897 and 1898); two oil paintings, one by Kenyon Cox (1887, replicated 1908) and one by Ellen Emmet Rand (around 1904); and a bronze bust by Saint-Gaudens’s one-time assistant John Flanagan (1905-1924, cast 1924). 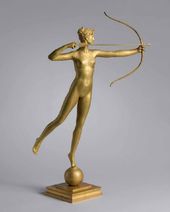 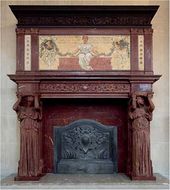 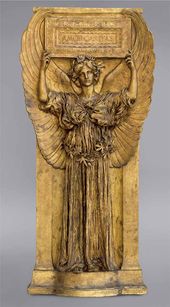 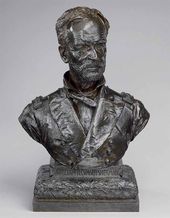 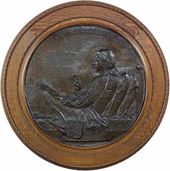 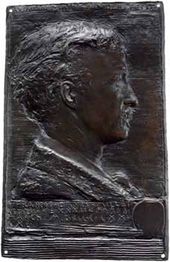 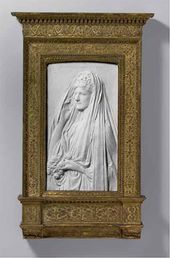 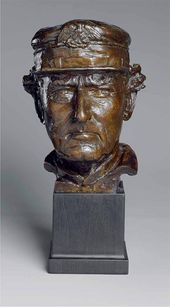 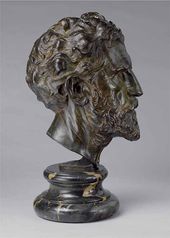 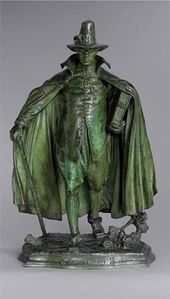