The Master’s artwork is superb
It captures and it warms the soul
Because he doesn’t choose the hues
But hues choose his brushstroke!*
Ilya Reznik

The descendant of an old princely dynasty has kept the sense of the honour and valour of his ancestors, and the customs and traditions of the Georgian people; his creative work is a seamless marriage between the originality of Georgian national culture and the experience of Russian and international art.

Zurab Tsereteli’s solo show, which opened in the Engineering Wing of the Tretyakov Gallery on May 26, running through July 26, demonstrates the unflagging energy, inspiration and imagination of a great eccentric talent, one who never rests on his laurels.

This exhibition features works created in different years in Paris. As a generator of ideas and a maximalist whose art, in a highly unusual manner but very aptly, combines classic traditions and new artistic discoveries, Tsereteli tackles difficult challenges working on the imagery of his monumental sculptures and indoor statues alike. His works are aggregations of feelings and thoughts that reach far beyond the conventions of separate stylistic trends and tendencies, amazing viewers with the magnitude of the artist’s creative scope, the variety of content and the richness of associations of their visual language.

“... Paris is better and more diverse than you imagine. Live there for months, maybe for years, because variety is one of its charms,” the outstanding French writer Andre Maurois wrote about Paris. Probably it is the inexhaustible versatility and diversity of “the capital of the spirit” and “the capital of good taste” that captures Zurab Tsereteli’s imagination and inspires in him a profound sense of affinity with the city. Here on the banks of the Seine, many years ago, the young artist was singled out by Pablo Picasso and Marc Chagall, both of whom predicted his brilliant artistic future.

The city was home to Honore de Balzac, Emile Zola, Stendhal, Theodore Gericault, Eugene Delacroix, Jean Auguste Dominique Ingres, Jacques Louis David, Franz Liszt, and Oscar Wilde... The list of the great names hallowed by Paris is much longer; and Zurab Tsereteli has a place of honour in this historic list.

Just like Charles Baudelaire, Guillaume Apollinaire and Jacques Prevert, Camille Pissarro and Henri Rousseau, Ernest Hemingway and Pablo Picasso, Tsereteli cherishes his own Paris, and yet, the Eiffel Tower remains the main landmark and symbol of the capital of France. The “portrait” of the tower dominates the show at the Tretyakov Gallery. In terms of its pictorial narrative, concept and colour scheme, this work of Tsereteli brings to mind, like a coupled reaction would, Marc Chagall's mural decorating the ceiling of the Paris Grand Opera (the building designed by Charles Garnier). Just like the mural of Chagall, Tsereteli’s painting features a wide assortment of images of those whom the artist holds in great esteem: as if before the mind’s eye rise the great men of culture — musicians in Chagall’s mural, artists in Tsereteli’s painting — surrounded by different personages and motifs alluding to the great spiritual heritage of the past. This painting is a pictorial hymn to the “movable feast”.

Paris has a magnetic attraction for those who believe in the transformative powers of art; like a litmus paper, it probes and tests talents. And Zurab Tsereteli passed the test with flying colours.

The versatility and protean character of his art sometimes baffles, although much more often it surprises and disarms the viewers with the sincerity of its transports and engulfing emotions. As a professional, he is a rare type who is good at everything, and he has the gift of foreseeing public reactions to different facts and events. Thus, for instance, Tsereteli was the first to respond to the “American” tragedy of the September 11 terror attacks in 2001, creating a metaphorical monument dedicated to the victims of terror, which was mounted by the Hudson River, against the backdrop of Manhattan and the Statue of Liberty. The artist has similarly responded to many events of similar magnitude, and much has been written about it. And although the exhibition “100 Artworks from Paris” is not a retrospective, it is a pertinent occasion to recall those which have not been displayed, because those beyond the show aptly highlight the main aspects of genre and content of Tsereteli’s art.

First of all, it should be pointed out that the Parisian paintings, drawings, enamels and sculptural compositions feature the artist’s key heroes and characters. They are imaged both amidst real historical events and in narratives brought about by the author’s exuberant imagination. The exhibition offers up paraphrases of Biblical, religious themes, allusions to the series of paintings with historical allegories, and the monuments created by Tsereteli, although most of the works on display are modestly sized pieces for indoor and/or decorative use. Of course, the viewer at the exhibition at the Gallery would likely pay attention, above all, to the pictorial polyphony and plastic expressiveness of Tsereteli’s pieces, irrespective of their genre or literary plot.

The fairy show of colours, the revelry of paints, the intensity of rhythms and forms correspond with the artist’s temperament and inner will, his optimistic outlook and personal ideals. Among the portraits stand out, distinguished by their psychological insight and emotional expressiveness, the images of Charlie Chaplin and Pablo Picasso, Niko Pirosmanashvili and Henri Rousseau, the multi-figure compositions in bronze, in which the author’s imagination brings together his soul mates of various aesthetic preferences. Brilliant in concept and execution, painted in the trio colours of white, black and red, the sculptural portrait of Picasso became for many of Tsereteli’s viewers, critics and admirers a discovery in terms of composition and a masterpiece of form and meaning.

Tsereteli’s circle of friends has always included brilliant, outstanding, creative personalities. They have been his soul mates and shared his attitudes to life; they exemplified for him talent, intelligence, and nobleness. The artist portrayed his friends and confederates in a series of sculptures not shown at the Gallery. To give the reader a better, more comprehensive idea of the maestro’s aesthetic and moral bearings, there are eminent Russian cultural figures, such as Vladimir Vysotsky and Joseph Brodsky, Andrei Voznesensky and Bella Akhmadulina, Andrei Dementiev and Ilya Reznik — all superb, unrivaled poets bearing the “diamond wreath” of modern international lyrical poetry. This company also includes superb artists, musicians, actors and directors such as Boris Yefimov, Tair Salakhov, Boris Messerer, Dmitry Shostakovich and Mstislav Rostropovich, Mark Zakharov and Nikita Mikhalkov... Either directly or indirectly Zurab Tsereteli passionately and openly expresses his feelings towards these outstanding personalities of our age; the painted images of bunches of flowers, distinguished by emotional brushwork, convey his sentiments to the multi-colour, full of contrasts world that we live in.

The still-lifes with flowers convey an infinite number of emotional nuances; some flower images look like an outburst of joy, others, more like a focused confession. The pieces in this genre have a special allure, because their vibrant texture and the full-toned chorus of colours provoke different associations in different viewers.

Tsereteli has a “sniper's eye” — he accomplishes most of his paintings in one sitting, creating images that persuasively convey his sitters’ character and sharply grasp their emotional and psychological state. His art combines lyrical romanticism and raw sensuality. These qualities of Tsereteli’s art are variously reflected both in the portraits and the genre and narrative pieces, landscapes and still-lifes. He is keen on unusual angles and compositions, forever experimenting and opening up new horizons for the art of the future. A driven person, Tsereteli never rests on his laurels, and so we can rightly say that his art is relevant both in terms of its form and in terms of its content. He remains at the centre of cultural and public activity — like a high-precision barometer, he responds to events of the time. However, the reactions to controversial, complex events and personalities, as expressed in Tsereteli’s works, are metaphorical, forming an intricate web of associations.

With his skills in a variety of artistic techniques, the media of fresco and oil painting, mosaic and glass painting, bronze and stone sculpture, cloisonne, three-dimension enamel and silk screen printing, he never looks back but determinedly moves forward, not in defiance of the academic tradition but for the sake of its development and improvement. His artistic discoveries germinate literally on the tips of his fingers — like bioelectric currents, they thread through his art.

Tsereteli is a true innovator; he is guided by intuition and a keen sensitivity to innovation of the visual language of art. The three-dimension enamel technique developed by Tsereteli is one of his most prominent discoveries in the field of advanced technologies that, designed to expand the range of pictorial and expressive art techniques, combine the properties of relief art and colour. In point of fact, this is one of the new elements in the synthesis of spatial and two-dimensional decorative form and principles, synthesis of the forms and principles of monumental and easel painting, and plastic art. In this, the artist achieves an amazing perfection and harmony. His enamel venture led him to new experiments in sculpture, painting and drawing. This is clearly demonstrated at the exhibition, where paintings and serigraphs co-exist and complement each other, enamel pieces being the link between them. In these pieces, the expressiveness of forms, the opalescent colours create a special sublime decorative space, which provoke in viewers a deep emotional response to the beauty and harmony of the holistic image.

What matters the most here is not the narrative plot or the personages and their interaction but the synthesis of arts.

This article almost does not mention the captions of Tsereteli’s works, because they, simple and unpretentious as a rule, often do not reflect the artist’s intent. If we look at the works through their labels, much will elude our attention, becoming a flat retelling. No well-known facts of the artist’s colourful, strikingly unusual life are mentioned here, although his mentors at the Tbilisi Academy of Arts deserve special note, being great names of national culture: David Kakabadze, Lado Gudiashvili, Ucha Dzhaparidze, and Vasily Shukhaev...

Returning to the subject of “100 Artworks from Paris”, one should emphasize the artist’s limitless trust in the viewers, their faculty of creativity in alliance with the artist and their imagination.

I believe that the art of Zurab Tsereteli is a bridge between the past, present and future, linking nations and countries, national cultures and traditions. This is clearly seen in his sculptures: Christopher Columbus in Seville, Nikolai Gogol in the Villa Borghese in Rome, Honore de Balzac in France; the statues mounted in New York, Tokyo, London... Lev Kolodny’s monograph, dedicated to the artist’s 75th anniversary, talks about it amply and ably, alongside articles by Viktor Vanslov, Marina Chegodaeva and Alexander Sidorov.

Zurab Tsereteli, the president of the Russian Academy of Arts, a UNESCO Goodwill Ambassador and an honorary member of many academies around the world, was awarded, in appreciation of his selfless and inspired creative work, with numerous honourary titles, prizes and distinctions in Russia and abroad; a list of all his achievements in the area of culture would take up more than one page. The exhibition at the Tretyakov Gallery in Moscow demonstrates again that recognition of the artist’s enormous contribution is a merited reward for his daily tireless labour and his attitude to art as an inherent inward need and way of life. 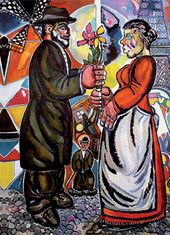 Chaplin and His Characters. 2008
Oil on canvas 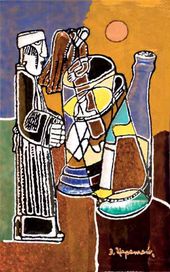 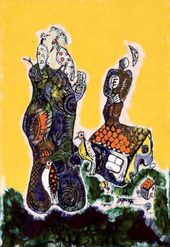 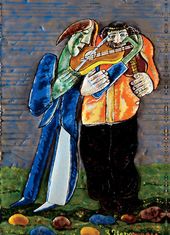 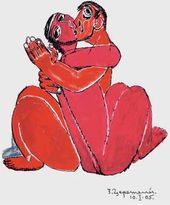 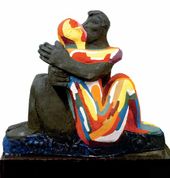 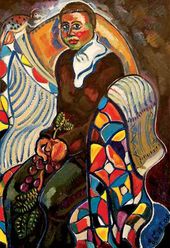 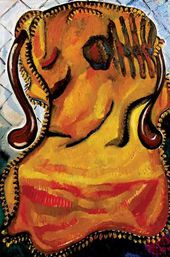 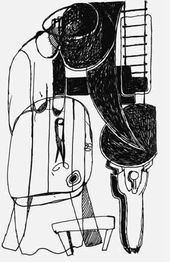 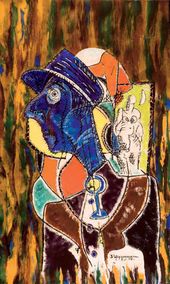 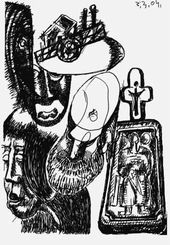 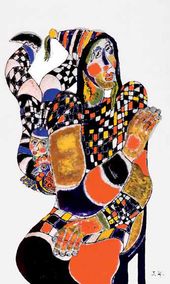 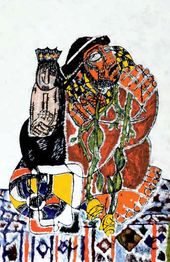