The 29th Olympics are due to begin on August 8 2008 on the central square of the Chinese capital. The Beijing Olympics motto is “One world, one dream".

A mobile exhibition “Olympics and Sculpture" took off in August 2005. The travel of the 2008 Olympics statues is a high-profile cultural event organized by the Beijing Organizing Committee for the 29th Olympics and other organizations. First stage of the project involved soliciting submissions from sculptures from all over the world. Sculptors from 90 nations from five continents responded to the call, and 270 best works originating from 25 nations were selected from among 2,433 submissions.

The “Olympics and Sculpture” exhibition visited 28 cities in 25 countries of the world, including Barcelona, Seoul, Tokyo, Los Angeles, Rome, London, and Chicago. In March 2008 the Olympic marathon of sculpture triumphantly came to a finish in Moscow. The show at Zurab Tsereteli’s gallery featured 47 short-listed sculptures — one of them to be nominated as the winner and become the official visit card and athletic symbol of the 29th Olympics in Beijing.

The president of the Charitable Russo-Chinese Foundation for Development of Education, Science and Culture, noted in her interview: “I am very pleased that the final stage of the exhibition takes place in Moscow. All the works featured here are beautiful, there are pieces by Chinese artists and international artists, including Russian ones. But most of all I liked Zurab Tsereteli’s work. I think this one is the most beautiful.”

Tsereteli conceived his 47-meter-long statue “Colossus the Olympic” (two versions of it, in form of models) as a replica of the non-surviving ancient Greek sculpture “Colossus of Rhodes”.

“The Olympic Games are a synthesis of human achievements in different walks of life, and art folks have actively participated in the creation of an image for every Olympics, an image that is expected to amaze and leave an indelible memory. The complexity and importance of this task are fascinating,” Tsereteli said.

The show in Moscow featured statues of athletes made of stone, bronze, clay, wood and even glass. The show’s works that caused the most excitement included statues conveying the atmosphere and character of the times, such as Aggelika Korovessi’s piece “The Spirit of Olympic Games now in China”. An iron statue, its athlete’s figures seem to be embedded in the tree crown, a landscape sculpture with the capacity to structure a polysemic space.

In China today urban sculpture is very fashionable: the Chinese believe that the level of development of sculpture is a good indication of the nation’s level of development. Thus every city, and in Beijing, every administrative district, has a special agency that decorates streets and parks with the most diverse statues; the preparation for the international athletic competition started off with an international competition of sculptors.

The winning sculptures are to be integrated into the park landscape of Beijing and, as a great gift to future generations, they shall immortalize the Olympics.

One of the peculiar characteristics of Chinese sculpture is a respect for ancestors, a cult of history and a unique capacity to integrate tradition with innovation. The imperial dynasties came and went one after another, whereas the skillful craftsmen continued to perfect the typically Chinese styles in iron and clay sculpture.

The works such as Zhuang Yanjun’s and Jing Yanhong’s “From Ancient to Modern Times — A Terracotta Side Horse”, Lui Jinkai ’s “The Millenium Dream — One Aim,” and Liu Bolin’s “New Beijing, New Starting Point” evoke the terracotta figures of the warriors of the Qin dynasty (circa 210 BC) discovered at the site of the archaeological dig in Lintong. It is very symbolic that the sculptor Liu Bolin represents a warrior on his marks before the start of a race into the future. The styles these sculptors look to for inspiration are those of antique bronze and clay statues. An ethnic self-awareness and self affirmation are clearly visible, drawing on the nation’s historical memory, its ancient archaic layers and religious symbolism.

The works of Chinese artists such as Xu Songtao (“Quafoo Chasing after the Sun”), Tian Jinduo’s, Wen Zengzhu’s, Tian Ziyang’s (“Eternal Sacred Fire”), Qian Sihua’s (“The Five Elements”), made with different media, are dominated by red, a colour of happiness and good fortune: the colour of the sun and the holy fire became the colour of the emblem of the 29th Olympic Games. The Americans Asherah Cinnamon and Scott Fuller, using industrial materials, created airy Buddhist temples, using red as a colour basis and symbolically calling the landscape sculpture “Gateway to China”.

The Olympics create an arena for demonstrating the triumph of athletic victories and glory. In this arena, every participant is a hero who, with inspiration, touchingly and enthusiastically, dedicates his energy and effort to the Olympic Games. The passion of sportsmanship and drive for victory permeate “Arrow Shooting” by Ren Zhe and “Victory” by Ji Zhou, as well as a statue of the Belgian artist Colette Goedefroit “Spirit of Sport”.

Wu Ronghua’s “Music and Dance” is an expression of the spirit of the Chinese people. The clay figurines of people in motion are an interpretation of a Chinese proverb, “When words cannot fully express the meaning, we sing, and when songs do not pull it off, we dance.” Beijing is anxiously waiting for the triumph of sport and invites all humans to dance. The red emblem “Dancing Beijing” is a landmark in the chapter of the Olympic epic.

Looking at the sculptural works of the celestial sculptors the viewer becomes unintentionally drawn into the atmosphere of the cultural tradition’s continuity and development. China takes seriously the development of the art of sculpture and painstakingly learns from other nations. Most Chinese artists want to get a quality education in Europe, although they have educational opportunities in China as well, at the Beijing Academy of Arts.

The Russian school of sculpture has had a major influence over modern Chinese sculpture, and Russian art schools have graduated many Chinese students. Students of prominent artists rightfully recognized as classics of sculpture of the 20th century — Pavel Bondarenko, Mikhail Baburin, Alexander Burganov, Oleg Komov, Leo Kerbel, Alexander Rukavishnikov, Anatoly Bichukov, and Mikhail Pereyaslavtsev — work today in China and other countries. To improve their skills, the sculptors energetically draw on the progressive international experience, advancing both traditional and modern sculpture.

The piece is dominated by the figurative and philosophical idea of Vrubel’s “Demon”. The artist Xu Lingling in the work “Silvery Dream” reproduces the idea and concept of Alexander Burganov’s “Love Is Running Away”.

The works of the sculptors Edward Eyth (USA), “Olympic Spirit,” Gloria Achucarro (Argentina), “Time and Existence ,” Ke Deng (China) “Toward the Wind” are marked by their romanticism and fascination with antiquity. The sculptors in their work widely used the language of allegory, parable and symbolic images.

Gerdur Gunnarsdottir’s (from Iceland) piece “To the Olympians — In the World of Harmony” is full of poetry reflecting different states of the human soul: contemplation, elan, and meditation.

The calligraphic piece “Rising Wind and Scudding Clouds” by the Chinese sculptor Xu Dekuan is an insight into the philosophical meaning of Buddhist art.

The show was a brilliant demonstration of artistic trends, stylistic solutions and the multi-variance of imagery in modern sculpture. The subjects of the sculptures referenced both history and modernity. The era of globalization, the expansion of international cultural links, the opportunities for the artists to see with their own eyes the works of international art opened up for the participants of the competition vast horizons of creative pursuit. The main goal of the exhibition is to realize the key principles of the Olympic charter — the unity of sport and culture and education. 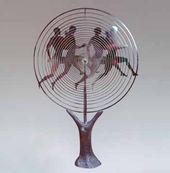 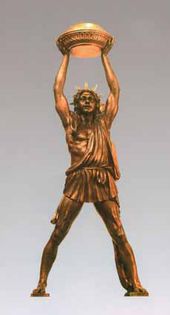 Gerdur GUNNARSDOTTIR. To the Olympics – in Peace and Harmony
Bronze. Iceland