Dialogue with the Self

“Cerca Trova”, the phrase of a prominent Italian Renaissance architect used as an epigraph for this article in many respects reflects the life in art of the contemporary Azerbaijani painter and graphic artist Farkhad Khalilov whose solo show was hosted by the Tretyakov Gallery from April 16 through May 18 2008.

Khalilov first made a name for himself as an original artist of note in the early 1970s. The “Sovetskii Khudozhnik” (Soviet Artist) publishing house issued, in 1977, in its “New Names” series a monograph about him written by the art scholar Vasily Rakitin, who wrote: “In the 1960s the notion of an ‘Azerbaijani school of painting’ took on a special meaning. The school gained wide acclaim as a remarkable phenomenon outside Azerbaijan as well. This was due to artistic breakthroughs of the great masters of national art — Tair Salakhov, Sattar Bakhlulzade, Togrul Narimanbekov, Tofik Djavadov...”

With a solid professional training received first in his native Baku and then in Moscow, at the Stroganov Arts and Crafts School and the Print Technology Institute, Farkhad Khalilov absorbed diverse traditions of Soviet art, and through them, assimilated and transformed the experience of international masters of painting. Rakitin wrote: “Through the lenses of Narimanbekov’s and Salakhov’s paintings he looked at Russian and European art and found mentors there. A familiar discourse started to sound differently, imperceptibly changing into a discourse that does not interfere with [the artist’s] personal reflections on life.”

But now this is a thing of the past. Recalling the artist’s early works, comparing them with his more recent ones, one is keenly aware of the changes his art has experienced over the past decades. Khalilov’s paintings no longer have an inner expressiveness of polyphony of colours — instead, they are marked by a more rational, thoughtful perception of the multi-faceted image of the world. Spontaneous impressions gave way to focused reflections on the meaning of life and of the universe. His art has become filled with associative meanings and acquired a metaphysical grandeur of imagery vision. And whereas the pieces from the 1970s and 1980s still have a certain dialogic quality, the artist’s later and latest, newest paintings demonstrate a radical shift in the creative frame of reference itself. Khalilov in fact ceased to feature motifs of place and action actually existing in a specific time — now they serve only as a starting point, a visual stimulus of philosophical insights into the conglomerate of the phenomena of life across the universe, without a beginning or an end; the artist reflects on eternity, on the infiniteness of the sacrament of life.

This sort of transition from one state of mind to another requires an enormous effort, a re-thinking of traditional values, changes in the characteristics of pictorial language, a quest for new techniques of and approaches to the expressiveness of imagery. All these changes have been evolving but gradually, as if unwilled by the artist. The making of a painting takes quite long, and this is why his canvases are inscribed with the dates indicating for just how long the artist had been working on each — the periods of time sometimes span years, although this does not mean that the work was uninterrupted. Obviously, the artist’s method of making paintings, time-expanded and requiring breaks, led him to use, instead of oil paints, acryllic, which can be applied to already dried paints and allows the introduction of substantial changes to the pictorial texture of a seemingly completed picture. This suggests that a piece with a final date on it has a more powerful energy, which lends a feeling of the whole, of a narrative rather than of the formal architectonics of the pictorial space.

This representational method ensures a wide range of perceptive associations, “Non Finito”, with incompleteness being the fruit of the artist’s philosophical concept, of the cosmic modality of his worldview. This style distinguishes the inimitable imagery of the paintings from the “Meeting” and “Tracery” series, and of the non-series paintings “Harvest” and “Summer”. Of course, these works are somewhat evocative of Kazimir Malevich’s suprematist pieces and Mark Rothko’s ecstatic colour scheme.

Farkhad Khalilov creates a kind of symbiosis of abstract images of the past, present and future, in which one can intuitively trace cosmic connections between other worlds and our civilization. Thus the application of light effects in the creation of some otherworldly spaces plunges the imagination into phantasmic, transcendental states. The artist’s colour design alternates between an amorphous, fleshless palette dissolving in cosmic glow and a colour scheme that seems to be filled from within with a materialized energy of nearly opaque colours. The syncretic fusion of ephemeral cosmic light and earthly flesh imparts to Khalilov’s works a special emotional expressiveness and grandeur of meaning.

The professional culture inherent in Farkhad Khalilov’s art is rooted in the Soviet past of our art, in the period after World War II, connected, maybe indirectly, with Khrushchev’s “thaw”, with the 1960s artists’ growing awareness of the place and role of their art in the context of international art, with references to the traditions of the Russian avant-garde and of the experience of the great artists of the 1920s and early 1930s.

In this respect, the section of the exhibition showcasing the 1980s landscapes is very revealing, featuring as they do various motifs of Apsheron villages still carrying the imprints of the centuries-old traditional way of life of Azerbaijan. Deserted streets, the blind walls of the sculpturesque homes, a sensation of summertime swelter, hot air and the high risen scorching sun is conveyed in a very artistically persuasive manner. However, these pieces are by no means prosaic scenes void of human figures — instead, they possess an epic soulfulness and a distinct spirituality. The haze heat of a sweltering summer transforms a scene from real life, as seen by a beholder, into a mirage. These paintings reference, in their own fashion, the motifs of eternity, relativism, the conditionality of existence. Some paintings are evocative of the art of Alexander Drevin and Nadezhda Udaltsova, most of all due to their elusive, atemporal quality. The subtle tonal arrangements seem to decolourize the artist’s colour scheme, making it minimalist and, at the same time, filling it with an anxiety of anticipation of something that has not come to be. The subdued colours create the appearance of a noble patina over the paintings highlighting a state of introspection, an intense immersion of self into the depths of memory, and thus making one feel a certain weightlessness of one’s existence in a phantasmic space of illusions that carry us far away from these places.

The suddenness of transformations experienced by the imagination of the viewer who sees, beyond the real-life contours of the pictured villages, such other worlds, is one of the distinct features of Khalilov’s talent. His recent pieces transcend the confines of genres, and the specificity of the recognizable melts into the philosophical texture of his art, into his fantasies bound for the infinite reaches of the universe. The poetically modulated, metaphorical and, in its own fashion, dramatic language of the allegorical art of the prominent Azerbaijani artist Farkhad Khalilov is an epitome of the spirituality of feelings, an epitome of his personal quest and of faith in the inscrutable mysterious silent beauty of the universe, and in a deep stillness of an eternal expectation and hope. 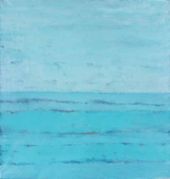