The Second Moscow Biennale of Contemporary Art has closed in the Russian capital, and as part of it the Tretyakov Gallery held a third exhibition in its long-term cycle “Trends in Russian Art”. Following the “Abstractions” and “Russian Pop-Art” shows, the new exhibition was dedicated to Sots-Art, and the historical and typological retrospective of the same name was held between 2 March and 1 April 2007. Outside Russia, Sots-Art is, without doubt, the best-known trend in Soviet art of the second half of the 20th century. Alongside pieces by Russian artists, the “Sots-art” exhibition also showed work by their Chinese colleagues, who were greatly influenced by this movement. Occupying five rooms on the third floor of the Tretyakov Gallery on Krymsky Val, the exhibition covered approximately 2,000 square meters.

Unlike pop-art - an international phenomenon which made its mark not only on American and West European culture, but also on the other hemisphere, in the art of Korea and Japan - the style of sots-art is usually seen as a purely Soviet product. Most encyclopedias of contemporary art define sots-art as rigidly localized by the framework of Moscow's unofficial art of the 1970-1980s.

Between the 1970s and 1980s, sots-art crossed the borders of the USSR. Thanks to the activities of the emigre artists, publications and exhibitions, sots-art acquired on the international scene the status of the patent style of Soviet non-conformism. Meanwhile, with the progress of Gorbachev's reforms, in the USSR sots-art became legalized, fashionable, and turned into the aesthetic brand of Perestroika. Gradually shedding its underground nature, it acquired a greater scale and some monumental and ornamental features. Its initial devices and images created in a narrow intellectual circle, while being endlessly repeated, stylized, and adopted on different levels of culture, spread down into design, architecture, mass media, and further onto the lower anonymous street folklore strata of art creativity. In the late 1980s sots-art was known as the mainstream of the time of change, the art of the period of the communist formation's collapse, the style of the "fading flags” epoch. In that capacity sots-art stepped into Europe, finding in the countries of the disintegrating "socialist camp” its first foreign adepts - Jerzy Truszkowsky in Poland, Flatz in Germany. Yet its strongest impact was felt in the East, where it gave a radical impulse to the emerging new art of 1990s China.

The affinity of the new Chinese art to Soviet sots-art proceeds from typological parallels: similar regimes generate similar art under analogous historical circumstances. Still, it was influenced by the knowledge of the Russian stylistic samples created twenty years earlier. We may say that the Chinese variant of sots-art is as close to the Soviet prototype as the Russian version of pop-art is close to the American one.

The founding fathers of sots-art Komar and Melamid repeatedly called their style a Soviet analogue of American pop-art. True, both trends are based on active interaction with the contexts of mass culture which in America is wrapped up in consumer temptations, while in Russia - in ideological coercion. A neat parallel, but it makes no allowance for the difference in attitude. The pop-artist adores advertising images, takes them lovingly from the billboards into the space of high culture, only slightly modifying their form and filling them with a new meaning. In sots-art, a similar game with the ideological source is based on its radical, consistent, and obvious negation. Pop-art preserves for eternity the fleeting images; sots-art shows up the frailty and decay of ideological constructs intended for eternity. Here is the difference between a conformist, time-serving creativity and an art of political protest. In fact, both types of art are practiced in Russia, as well as in America and other countries. The famous American artist Hans Haacke, the Spaniard Antoni Muntadas, the Frenchman Olivier Blanckart produce fine samples of their own sots-art totally unconnected with the Soviet ideological realia. What is common to them all is not this or that political context against which they are battling, but the type of artistic attitude - a pronouncement without any set program, dogma or utopia. They don't set up any alternative slogans, demands, or social projects, they don't promote any new parties or political leaders. Their variant of political art may be described as sots-art since they create paradoxical, explosive images rejecting the temptation of personality knuckling under authority.

The philosophical basis of sots-art is nihilistic relativism. Sots-art rejects blind faith in whatever dogma it may be. It is bent against any cults - be they generated by the personality internally or imposed on it externally by political, economic, spiritual, or any other authority. Sots-art won't tolerate anything that humiliates an individual by inequality, pushes you to your knees, forces you to uncritical submission; sots-art is aimed against any peremptory absolute. The weapons it uses against such cults are laughter, clowning, travesty, and mystification - neatly and gaily expressing the philosophy of unorthodox changeability.

The cults are personified by the figures of "bosses”, political leaders, also by their prominent dissident opponents, by spiritual leaders, outstanding figures of culture, and so on. Such personages (not only Bolshevik leaders, but also other deified bronze authorities - Pushkin, Tchaikovsky, Repin, Solzhenitsyn) are represented in funny grotesque situations. It would be a mistake, though, to class sots-art with political cartoon genre: it doesn't produce caricatures distorting the features of this or that politician. It doesn't try at all to represent "nature”. Having emerged in the footsteps of pop-art and inheriting much of its world view, sots-art responds not to reality as such, but to its "picture”, to the expression of reality through some visual language. For sots-art, in the words of Jacques Derrida, "there is nothing outside of the text”. Therefore its main opponent is a stylistically accomplished text whose repressive function is veiled with the lace of rhetoric.

The critics of sots-art often called it "anti-art” - and not without grounds, for sots-art not only distances itself from any artistically perfect "text”, but consistently tries to destroy it at any encounter. Such phobia possibly results from the fact that art happens to be the most effective tool in spreading and inculcating cults.

Sots-art breaks open the glossy surface of rhetorical figures of style with a special set of lock-picks. The first of them is to bring together conflicting forms of description in one and the same artwork or image, as in the portrait of Karl Marx executed by Komar and Melamid in the manners of cubism and of socialist realism combined. The second is to create a deliberate conflict between the subject and the descriptive idiom, for instance, to apply an unassuming everyday style (folk carved wooden toys) to ceremonial portraits of Soviet leaders. Khrushchev as a big Vanka-Vstanka [jump-up doll] and Andropov with big rotating radar-like ears (funny effigies by Leonid Sokov) are a frank send-up of their formidable prototypes.

Sots-art is averse to aestheticizing its own discourse. On the contrary, its artistic canon is based on self-parody and self-refutation. Sots-artists made it a point of their programme not to develop their own plastic system, substituting for it the concept of broken form and the practice of appropriation. The aesthetics of the "bad thing” - reappearing in Russian art for the first time since Dadaism - denied professional perfectionism and stressed the disjointed shabby nature of the sots-art project. The artist is not circumscribed in his work, but demonstrates through it other external texts, playing a combinatorial game with them. His art image does not result from the process of creating his work, but from the ephemeral mental juxtaposition of contexts illustrated in his work executed sketchily, "on the knee”. The author's drawing is often replaced with collage, as in the Kiss by Vagrich Bakhchanyan, and if drawing is used, as in the similar work by Dmitry Vrubel, it is deliberately neutralized and devoid of artistry.

The plastic slackness of sots-art works is compensated for by the activity of the author who - for the first time since the street actions staged by Russian futurists - stepped from behind his picture into social reality. Sots-art is wholly based on performance, its works are documents or products of performing actions. The sots-artist speaks in his work not in his own name, but on the part of a certain personage whose mask he wears during the performance. That is a picaresque image, a rogue, a cheat, a fraud, a double-dealer, who resorts to the strategy of game, simulation, fake, and evasion. The image was invariably represented by several generations of sots-artists and survives to this day (see the stage-managed photographs by Avdey Ter-Oganyan, and the Blue Noses Group). This mythical figure is spiritually close to the ideology of the style. According to Jung, the Rogue epitomizes a young heroic rebel against tyranny who wins not by force, but by cunning.

The political Fronde of sots-art was expressed not only by parodies and personifications of cult texts, but also by a certain type of behaviour which - in whatever variation - was found shocking in a society with strict regimentation. That "mocking” behaviour was chosen by the adepts of the style as a panacea and therapy for totalitarian social relations. The mocking style was not only adopted and played on by the author, it was also passed over to the spectator, who couldn't help laughing at the silly and absurd images in the parodies of sots-art.

Games and performances often bordering on idiotic escapades, the authors' self-presentation as crazy clowns, were curiously combined with deep learning, with references to actual achievements of science and philosophy. Above all, the authors were interested in structuralism, which in the late 1960s - early 1970s offered a new vision of individual creativity and the development of styles and cultures. This interest was prepared by the study of Russian formalists and Mikhail Bakhtin's work. Sots-artists assumed the role of researchers into culture. Inspired by the ideas of Claude Levi-Strauss and Roland Barthes, they developed a holistic understanding of 20th century Russian art and of Soviet culture in general as a triad: "avant-garde - social realism - conceptualism”. To this day, this triad determines scholarly attitudes and approaches to the expositions of Russia's art historians.

The exhibition sponsors were:
The "Novy” Fond (New Foundation), British American Tobacco; the Prolab company offered invaluable assistance in the printing and restoration of old photographs.

Curated by Xin Dong Cheng, the Chinese part of the exhibition was sponsored by Gazprom and the Xin Dong Cheng Space for Contemporary Art voluntary organization. 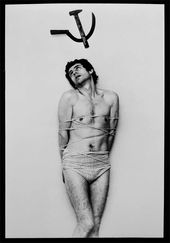 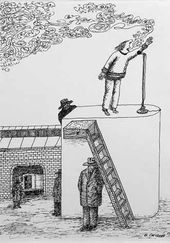 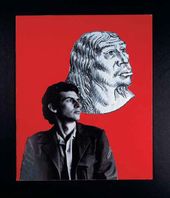 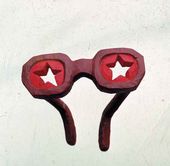 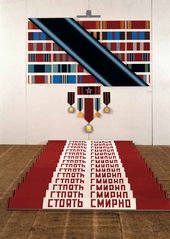 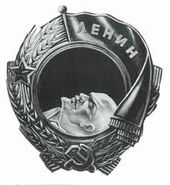 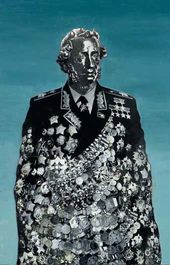 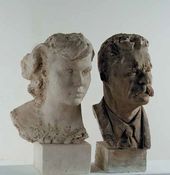 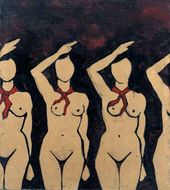 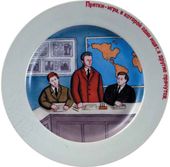 Grisha BRUSKIN. Letter ‘P’ (Hide-and-seek is a play in which one man is seeking and others are hiding). From a set of 34 plates ABC maxims. 1998
D 23.5 cm. Property of the artist