Vasily Vereshchagin’s “Solomon’s Wall” (1884-1885) came to Russia for the first time and was exhibited for two weeks in March at the Tretyakov Gallery in the Vereshchagin Room, next to other works by this famous Russian artist. 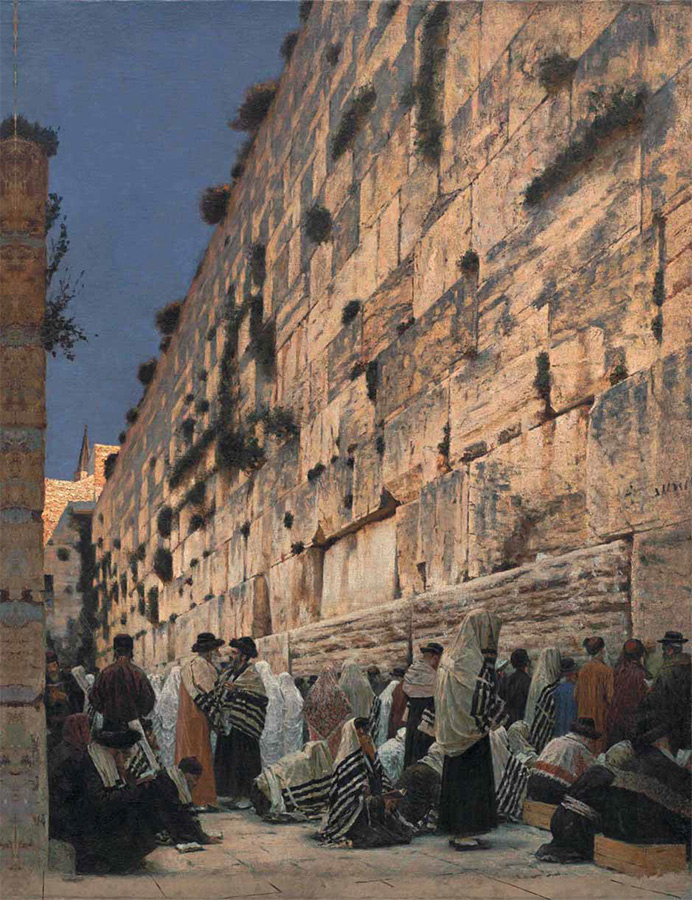 This project launches a new collaboration between the Tretyakov Gallery and Christie's, the world's leading auction house, which is aimed at not only bringing to Russia masterpieces of the international art market, but also at making them accessible to the general public. It will also contribute to the renaissance of art-collecting traditions, following in the footsteps of the founder of the Tretyakov Gallery, the famous collector and philanthropist Pavel Tretyakov.

Valentin Rodionov, director of the Tretyakov Gallery and Jussi Pylkanen, president of Christie's Europe, spoke at the opening ceremony.

"We are delighted to host the famous painting by Vasily Vereshchagin the 'Solomon's Wall' which, for the first time since its creation in 1884-1885, is coming to Russia.

"For nearly two weeks 'Solomon's Wall' will be exhibited in the Vereshchagin Room among other masterpieces from our permanent display, next to a study from our museum collection, specially created for the painting by the artist,” Rodionov said "The Tretyakov Gallery is rightfully proud of its world's largest collection of works by this great Russian artist, whose work was so highly praised by Pavel Tretyakov himself. Tretyakov personally acquired a considerable part of his artistic legacy, and thus salvaged it for future generations.

"We welcome our new joint project with Christie's which will make it possible for a wide range of art lovers and Russian collectors to view masterpieces created by Russian artists. Works, which at the hand of fate, happened to end up in different corners of the world and are only just now resurfacing in the world art market.”

Jussi Pylkanen, president Christie's Europe, continued: "It is a great honour for us to exhibit the 'Solomon's Wall' by Vasily Vereshchagin at the Tretyakov Gallery - the treasury of Russian art and one of the leading museums of the world.” "In every country its national culture is being largely defined by the relationships between public museums and private collections. The world over, they coexist closely, supporting each other - and that is what keeps them alive and allows them to develop.

"It was the concept of wide accessibility of works of art which served as the foundation upon which the great collector and philanthropist Pavel Tretyakov built this magnificent museum. We are very happy to launch our cooperation with the Tretyakov Gallery and in the future intend to bring to and exhibit in Russia works of art of top museum quality.”

Today the Tretyakov Gallery boasts the largest collection of works by Vereshchagin: 138 paintings and about 400 drawings. However, works from the "Palestine Series”, to which "Solomon's Wall” belongs, are very rare even for the Tretyakov Gallery. Numerous visitors to the gallery, including Russian collectors, could see this masterpiece for two weeks in March.

By the 1880s Vereshchagin's reputation as a master of the historical genre and Russia's greatest battle painter was well established. Although he was embraced by liberal art critics as a realist and idolized by the general public, Vereshchagin was condemned by the Russian authorities for his allegedly biased portrayals of wars and the accurate depiction of their brutality. Vicious attacks unleashed by the reactionary press drove the artist to contemplate a new project: a journey to the exotic and mysterious land of Palestine.

Upon his arrival there in 1883, Vereshchagin was captivated by the solemn beauty and the diverse national traits of the Holy Land, and was inspired by its historic monuments and sites held sacred by Christians, Jews, and Muslims alike. Among his subjects were the Tomb of Abraham, the Ezdraelon Valley, the Tombs of the Kings, the remains of the ancient town of Bethsaida, and the old Jewish Tombs near Jerusalem. What was originally planned to be a short trip to paint studies turned into a two-year adventure. It resulted in a collection of works known as the Palestine Series, of which the painting "Solomon's Wall” is a real masterpiece.

The "Palestine Series” was completed in Paris during 1884-1885 based on live studies. It included a cycle of paintings depicting the life of Jesus and the Holy Family. These subjects were presented in a prosaic setting stripped of the usual glorifying undertones. This quickly stirred significant controversy, so that the series disappeared from public view shortly after its European and American debuts. The paintings were banned from being shown or reproduced in Russia.

The last time the paintings from Vereshchagin's Palestine Series were exhibited was at his personal exhibitions in the US. In November 1888, following an aggressive promotional campaign organized by the American Art Association, Vereshchagin's exhibition opened at the American Fine Art Gallery in New York, and over its two months the show was a phenomenal success. The exhibition went on a tour that ended in 1891, and the works then returned to New York where the entire collection of 100 paintings was auctioned off on November 17 of the same year.

Only a few paintings were acquired by museums; most of the works were purchased by private collectors. Eventually a few sketches and paintings ended up in Russia, but on the whole the Palestine Series remained little known amongst Russian collectors and art historians. The whereabouts of the majority of works from the series remain a mystery; only a few reappeared on the international art market following the 1891 auction. For these reasons, after nearly a century of oblivion, the emergence of "Solomon's Wall” on the market is a highly significant event for researchers and admirers of Vereshchagin's art.

Until recently, the painting was part of the collection of the Berkeley Fine Art Museum in California, having been donated by its patron Phoebe Hurst, who in turn had acquired it at the 1891 auction in New York.

After completing the international pre-auction tour (New York - Moscow - Tel-Aviv - New York), the painting was offered for sale at the Russian auction in Christie's New York on April 18 2007 and was sold to an anonymous Russian buyer for the sum of $3,624 million.

By the Communinations Department of the Tretyakov Gallery