To See the World Transformed. On the 120th anniversary of the birth of Olga Rozanova

On March 29, at the end of its jubilee year, the Tretyakov Gallery opened new exhibition premises reconstructed by the Government of Moscow - “The Exhibition Hall in Tolmachi”, which is close to the main building of the gallery. The opening of the new hall was marked by the solo exhibition of Olga Rozanova (1886-1918), one of the most significant figures of the Russian avant-garde, who left a distinct heritage in 20th century art, despite her short life. More than 50 canvases and graphic works are on display.

In his opening address, the General Director of the Tretyakov Gallery, Valentin Rodionov. thanked the Government of Moscow and its Mayor, Yury Luzhkov, for their help in expanding the Gallery's premises and expressed the hope that the new hall would assume a worthy place among the cultural centres of the Russian capital.

The exhibition is based on a collection of Rozanova's works, which are little known not only to the wider public, but also to experts; it was assembled and preserved by Olga's brother, Anatoly Rozanov (1881-1958), and kept in Germany for quite some time and brought back to Russia only recently. Now it belongs to private collectors. There are many works, differing in time, character and quality, from brief sketches and early watercolours to pictures and drawings from the last years of the artist's short life.

The earliest of them are student copies of drawings, church frescoes, and series of "Drawings” and "Flowers” made in the 1900s. There are several landscape drawings painted in Vladimir, Melenki and in the Crimea, which show a rapid progress from simple impressions of nature to their futuristic reappraisal and perception. The pictorial portrait of her brother (c. 1912) was painted at the time of Olga Rozanova's triumphant appearance at the exhibitions of St. Petersburg's artist society "Union of the Young”. The display also includes sheets from the album "War” (1916), the text of which was written by the poet and theorist of Russian cubism-futurism and the creator of "nonsensical” language Alexei Kruchenykh, with whom Rozanova had close personal relations. The artist regarded this publication as her best artistic achievement in print. The collection mentioned contains the most interesting suprematic compositions and suprematic ornaments for textiles and applied-art objects (ribbons, pillows and hand-bags) made for an exhibition of applied art work by the "Verbovka” (Recruiting) group of artists (December 1917). In some of them Olga Rozanova, while continuing her quests in the nonobjectivity sphere, goes beyond the bounds of suprematism and exploring colour she works out the idea of "lightbearing” colours, calling it "the transformation of colour scheme”.

The pictures on show include several works from museums, the "Staryye Gody” ("Earlier Years”) Foundation, and private collections. Among them are a "Female Portrait” (1907) and a landscape of an earlier period from the Tretyakov Gallery, the famous "Self-portrait” (1911) and "The Knave of Clubs” (1916)  from the Ivanovo Art Museum.

On her way to abstract art Olga Rozanova passed through all stages of the avant-garde and left a visible trace everywhere. She was always in the centre of the renovation of art. In her article "The Foundations of New Creativity and Reasons for Failure to Understand It” from 1913 Rozanova anticipated much of what Kazimir Malevich would write in his pamphlet "From Cubism to Futurism and Suprematism” in 1915.

Olga Rozanova was among the founders of the "Supremus” Art Society (1917)  and supervised the work of a studio at the first State Free Art Workshops (the former Stroganov Art School). She helped revive traditional folk crafts and organize the Free Artistic-Industrial and Handicraft Workshops.

When working on the decoration of Moscow for the celebrations of the first anniversary of the October revolution, Olga Rozanova fell ill and died of diphtheria on November 7 1918. The mourning procession at her funeral was headed by Kazimir Malevich who carried a black banner with a white square on it.

Malevich highly praised Rozanova as the most talented suprematic artist. Alexander Rodchenko regarded her "the foremost master of suprematic art” and "a revolutionary in art”, and Kruchenykh called her "the best artist of Petrograd”. Vladimir Mayakovsky dedicated a cycle of verses to her.

A major event in Moscow's cultural life, the exhibition of works by Olga Rozanova and related documents will be open until May 21 2007. 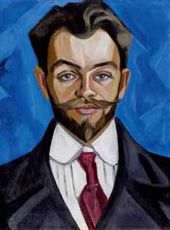 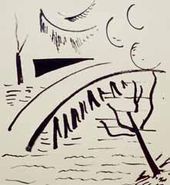 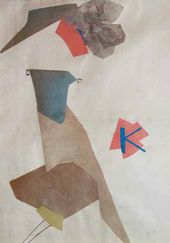 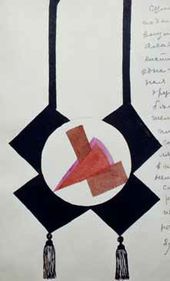