HALLMARK OF QUALITY IN STOCKHOLM

On March 15, Ivan Samarine and the Stockholm Auction House (Stockholms Auktionsverk) held their third Russian Auction, a sale devoted entirely to Russian art. Including more than 400 lots, nearly half were paintings, dating from Alexander Roslin from the 18th century to the non-conformists of the 1970s. There was also a small section of icons, some furniture, silver and Faberge, quite an extensive collection of porcelain, early Soviet posters, some textiles and some books. Estimates ranged from $ 250,0 - $ 400,000.

The role of the compiler of auction catalogues (in this case, the writer of this article) is a curious one. Outsiders frequently look at the published work as if it were an exhibition. Of course, the only thing that unites all the works in the catalogue is the fact that their owners happen to want to sell them at that particular moment. One may have wished for a better Aivazovsky, a more representative Shishkin, a vase in better condition, but these are the things that have been offered by the sellers, and these are the things one has to work with. And yet, curiously, auction catalogues do reflect the personality and the interests of their compilers. Each one is different, in its layout and design, in the tone of its footnotes, in its promotion of one particular item over another.

I began my career in 1988 in the then brand new Russian department of Sotheby's in London with the late John Stuart, a Russophile, gentleman scholar and the leading western specialist on icon painting. In those days Russian art was inexpensive, there were no Russian buyers, there was little illustrated literature and communication with Russia was not easy. On top of this we, the new Russian department, had constantly to justify ourselves to the bosses at Sotheby's, who were more inclined to sell Van Gogh for millions than bother themselves with little known Russian artists with unpronounceable names.

Many of the artists were unknown to us also, but John Stuart's conviction was that that was not important: it was quality that mattered. Drawing, painting, indeed all artistic endeavour is distinguished by its quality. Its nationality or authorship is secondary. There were enough western clients who recognised this, who could see that the paintings we were offering, even if the painters were unfamiliar to them, were of the same quality as European paintings that were ten times more expensive; and so we survived as a department, with a turnover of about $2 million a year, until the arrival of the first Russian clients in the early 1990s.

Much has changed since then, but my guiding principles remain the same as they were then. I was particularly proud therefore that the lot I chose to illustrate on the cover of the catalogue, a watercolour measuring only 43 by 35.5 cm, "Courtiers and Military Personnel in the 1812 Portrait Gallery in the Winter Palace” by the little known painter Karl Piratsky, more than tripled its pre-sale estimate $135,000 sold for just over $500,000 - a price that makes it the most expensive 19th century Russian work on paper ever sold at auction. The watercolour is of breath-taking quality, in which the artist has managed, using only paints, to conjure up an entire world. Depictions of military uniforms were commonplace in 19th century Europe, but nowhere other than in Russia were watercolours of such a quality produced. It is to me a sign of the growing maturity of the market that it recognised this fact, and a refutation of the often-made accusation that Russian buyers are more interested in brands and labels than in real quality.

Another highlight of the sale was a painting, "The Widower's Morning”, by the "Peredvizhnik” (Wanderer) Vasily Maximov. It perfectly illustrates how the art market directly contributes to scholarship, by bringing to our attention things lying forgotten in private houses. The painting, the property of an old Swedish couple who had inherited it from their parents, was originally acquired by the Swedish envoy to the Soviet Union in the 1930s. It was known only by repute to art historians, having been exhibited at the 1 2th Wanderers Exhibition of 1884, and A. Leonov, in his 1951 monograph on the painter, claims the painting to have been lost. The owners had shown it to a Swedish specialist in 1994, only to be told that it was by Makovsky, and worth $1000. Unsurprisingly, they decided to keep it. It is only the recent high prices for Russian art, much reported in the international press, which persuaded them to ask again. The painting, a major work by this undervalued artist, was estimated at $70,000 but soared to sell for $545,000 before premium.

The auction produced a great number of high prices, proving that the Russian market continues to grow and to deepen. All the most important lots of the sale were keenly fought over; a winter landscape by Alexei Savrasov sold for $1.43 million dollars before premium, a new world record for the artist; a fabulous Somov painting entitled "Lovers” of 1922 more than doubled its estimate, finally selling for more than $1.2 million dollars before premium; an 1850 view of St. Petersburg by the little known painter Vladimir Feodorovich Ammon made nearly ten times its estimate at $316,000 before premium. Paintings by Vasily Polenov, Alexei Bogoliubov, Konstantin Korovin, Isaac Levitan, Robert Falk, Yuly Klever, Leonid Pasternak and Yuri Pimenov all sold well above their estimates. Works of art continued this trend, with particularly high prices being achieved by both Imperial and Soviet porcelain plates, bronzes and enamel.

Nearly all the buyers were Russian, as is to be expected today, although there was some non-Russian bidding from Sweden, Italy, the UK and the US. The next Russian sale at the Stockholm Auction House will take place on September 28 2007. 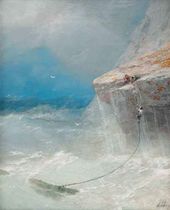 Ivan AIVAZOVSKY. Rescue by the Cliff
Оil on canvas. 32 by 26 cm 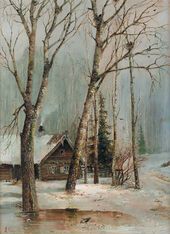 Alexei SAVRASOV. Cottage in the Woods
Oil on canvas. 84 by 61 cm 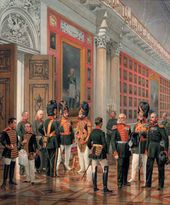 Karl PIRATSKY. Courtiers and Military Personnel in the 1812 Portrait Gallery in the Winter Palace. 1861
Watercolour and pencil. 43 by 35.5 cm 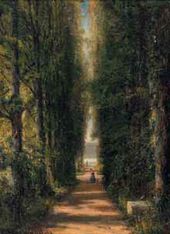 Isaac LEVITAN. Landscape with a River
Oil on canvas. 66 by 98 cm

Vasily POLENOV. The Residence of Tsarevich Alexander Alexandrovich in the village of Brestovtse, guarded by a Cossack soldier during the Russo-Turkish conflict in the Balkans. 1877
Oil on canvas board. 24 by 31.5 cm 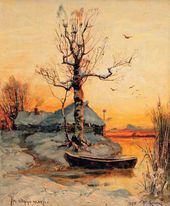 Konstantin KOROVIN. Evening on the French Coast
Oil on canvas. 46 by 64.5 cm