A Double Portrait: Sargent and Sorolla

ONE OF THE MAIN EXHIBITIONS OF WINTER 2006 IN MADRID WAS AN UNPRECE­DENTED "DOUBLE" EXHIBITION OF THE ARTISTS JOHN SINGER SARGENT AND JOA­QUIN SOROLLA, STAGED IN TWO LOCATIONS - THE THYSSEN-BORNEMISZA MUSEUM, AND THE MAJOR CENTRAL CITY EXHIBITION HALL, THE FUNDACION CAJA MADRID. AFTER ITS CLOSURE IN SPAIN IN JANUARY, IT WILL RUN AT THE PETIT PALAIS IN PARIS UNTIL MAY 13.

The concept behind the exhibition mirrors a range of artistic and biographical likenesses between the two artists, both of whom re­main relatively little known in Russia, especially Sorolla. Their lives and careers almost overlapped - Sargent (1856-1925), Sorolla (1863-­1923) - as do many of their stylistic tendencies, and the various genres in which they work: from society portraiture, through monumental public work, and, perhaps most exuberantly of all, their "luminist" plein air scenes.

"Why Sargent and Sorolla? (...) My primary aim was not to offer an account of a period but to characterise a tendency which had been long swathed in obscurity and confusion (as is so often the case) and had then been poorly explained. The obscurity arose from the fact that after the g reat disaster of the two world wars, 20th-century cul­ture had evolved, destroying the cultural history of its recent past. The discourse of art history had been written on the basis of the triumph of the marginal avant-gardes of the early 20th century," wrote Tomas Llorens, former chief curator of the Thyssen-Borne-misza Museum in Madrid, and curator of the Sargent-Sorolla show.

"It had been badly explained because the non-avant-garde ar­tists who had survived in memory despite the cataclysm were inter­preted through means of imprecise descriptive terms, such as that of Luminism, labels coined under the influence of the prevailing histo­rical model. Ultimately, my methodological approach here is simple. Biography is despite everything the most reliable genre within art hi­story. Thus by placing side by side the two artists' biographies (as Plu­tarch did with different ends in mind), one of a northern artist, the other a southern one, we might perhaps be able to see more clearly a poorly understood phase in the development of modern painting."

That the two artists were aware of each others' works is unque­stioned, with Sargent involved in preparation for Sorolla's 1908 Lon­don exhibition, during which trip the Spanish artist certainly saw Sargent's initial work and sketches for his monumental decorative work for the Boston Public library.

There was certainly closer knowledge, too. As critic and art hi­storian Robert Rosenblum, senior professor of Fine Arts at the Uni­versity of New York, writes comparing exhibitions of the two artists held in the late 1980s at New York's Whitney Museum: " (...) Seeing the painting again and seeing it in the full context of the artist's work, I felt that the moment had come to acknowledge that Sorolla was an indispensable part of art history, returned to us from oblivion. And almost at the same time, the genius of Sargent, once obscured by an allegiance to modernism, was newly discovered. In 1987, two years before the Sorolla exhibition, Sargent was given a retrospective at the Whitney Museum of American Art, New York. There, new audi­ences were dazzled by his pictorial fireworks, the equivalent of a fen­cing-master who holds a brush rather than a foil, and also fascinated by the immediacy of his grasp of the visual facts, both of people and of things, that belonged to long-lost social milieu, rendered with such palpable intensity that the effect was similar to watching an histori­cal movie that would immerse us in the daily life of another world, remote from ours but magically resurrected more and more appa­rent; and I remember being delighted to learn that one of the small oil sketches for 'Sad Inheritance', a dappled marvel of sun-drenched sea, sky, and flesh, bore the inscription: 'Al pintor Sargent/ J. Sorolla y Bastida 1903.' Now, in this exhibition, their relationship can be more fully explored, with results that are sure to demand new narratives in the history of art."

The likenesses between the two artists reflect fascinatingly on the themes explored by the Tretyakov Gallery's recent "Whistler in Russia" major exhibition - how circumstantial history, as well as a knowledge of and involvement in a wider European artistic environ­ment, brought into being something close to a shared aesthetic that mirrored both the artistic and, to some extent, the societal (given that portraiture was an important genre for both artists, not least for allowing them the financial freedom to pursue other directions) aspects of their times.

In portraiture they share another clear influence, too - Velas­quez. Sargent first visited Madrid's Prado Museum in 1879, and copied the great Spanish painter's work, while Sorolla appeared there two years later, in 1881. Travelling from his art school studies in Paris at the studio of Carolus-Duran, Sargent went on in the same journey to travel and paint around Spain, including in Granada and Seville, ab­sorbing the influence of El Greco and Goya as well in the process.

In terms of their immediate backgrounds, however, the two ar­tists certainly differ. Born in Florence to a wealthy expatriate Ameri­can family, Sargent (like Whistler, indeed) was an American artist who chose Europe as his world, and traveled extensively all around the Mediterranean. Sorolla, by contrast, was from a humble family, orphaned at the age of two. After art school, in 1884 he was was awarded a grant by the Regional Government of Valencia - the state of his birth (and the location of some of his most glorious later plein air beach scenes) to study in Italy, where he lived from 1885 to 1889. During his years as a student he met the photographer Antonio Garcia who became his protector and whose daughter Clotilde mar­ried Sorolla in 1888. Between 1889 and 1895 the couple had three child­ren, Maria, Joaquin and Elena - his wife and children are among the artist's most frequent subjects - moving to Madrid in 1890.

Prospering from his portrait work, Sorolla eventually built him­self, on the strength of the patronage of the wealthy American pat­ron Archer Milton Huntington for whom he completed monumental works for the Hispanic Society of America in New York, as well as pro­ceeds of considerable sales of his works at a landmark exhibition of his work held at the Hispanic Society in 1909, the large Madrid house that would also become a museum for his paintings. His work on the Hispanic Society project saw Sorolla travelling around Spain for eight years, with some difficulties, to capture an authentic sense of its dif­ferent regions. He also exploited such experience in designing his own new Madrid home that, with its atmospheric Andalucian gar­dens and native tilework, is a real jewel of Madrid artistic culture of its time.

The "Sargent-Sorolla" exhibition comprises sections devoted to interiors, social themes (in Sorolla's case at least, with works from the early 1880s which do not look unlike the work of Russia's "Peredvizhniki" (Wanderers)), landscapes, portraiture (both individual and group), their monumental commissions, and perhaps most notably their plein air work.

Both artists likely became acquainted with each others' works in the salons of Paris - and it would be fascinating to know how the shared influence of such interaction marked Russian artists of the same period. Another related field of study could be through the work of others, like Swedish artist Anders Zorn, with whom both Sar­gent and Sorolla were acquainted, and which was shown in Russia in its time.

The likeness of some of the portraiture of the period from Rus­sia, not least Valentin Serov, looks remarkable - while there's an un­canny stylistic familiarity between Serov's "Bathing the Horse" (1905, in the Russian Museum), and Sorolla's similarly titled work from four years later. As with Whistler's interactions with his Russian collea­gues and contemporaries, this is no banale example of "copying" -but rather a revealing story of how artistic movements and tenden­cies crossed national borders across Europe with no hindrance. Bio­graphy is indeed, in Llorens's words, one of dominating factors in art history. 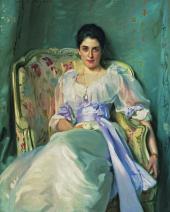 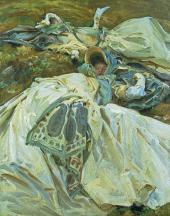 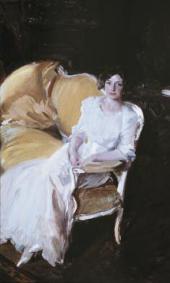 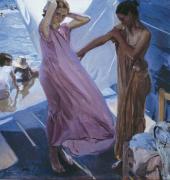 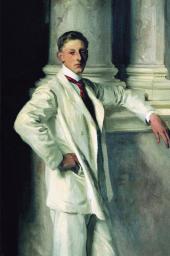