THE COLOUR OF POMEGRANATE

On the 120th Anniversary of Alexander Volkov's Birth

The exhibition of works by Alexander Volkov at the Tretyakov Art Gallery marks the 120th anniversary of the artist's birth, and is held 40 years after his last solo show in Moscow. It introduces viewers to the full range of his creative work, presenting works from Russian museums, private collections, and also his family's collection.

Its basis comes from his pictures from the collection of the Tretyakov Art Gallery (37 paintings and 49 graphic works). Volkov's first pictures were acquired by the Gallery from him in 1934, when there was an exhibition of works of artists from Uzbekistan in Moscow. Later they were acquired from the artist's heirs. In 1968, after his one-man show in Moscow, his most famous picture, "The Pomegranate Chaikhana" (Tea-room), was bought.

Alexander Volkov belongs to two cultures - Uzbek and Russian - and his name is well known to connoisseurs. His works are always on display at the Tretyakov Art Gallery, the Museum of Oriental Art, the Museum of Art of Uzbekistan, and the Art Museum of Karakalpakia in Nukus. They are shown at international exhibitions and are popular with collectors of fine art.

Russian by nationality, Alexander Volkov was born and lived and worked in Uzbekistan. However, he studied and matured as an artist at the three most important art centres - St. Petersburg, Moscow and Kiev. Among his tutors were such outstanding Russian artists as Vladimir Makovsky, Nicholas Roerich and Ivan Bilibin.

While in Kiev, the young artist was greatly impressed by the mosaics of St. Sophia and the murals by Mikhail Vrubel at the Church of St. Cyril. The spirit of Byzantium transformed by Vrubel in his mythical pictures made a great impact on Volkov and opened up new paths in his fine art work.

His acquaintance with the latest trends in modern French art, which he came into contact with through the private collections of Morozov and Shchukin in Moscow, as well as works by Russian avant-garde artists, which he perceived through the decorative art of the Orient, enabled Volkov to evolve his own inimitable artistic style. His cubist shifts of forms and futuristic approach to dynamic rhythms are vividly expressed by the artist in his cycle of "caravan" compositions.

Combining traditions of folk, or primitive art with Biblical subjects and Sufi motifs of the Eastern religions, Volkov created a series of pictures of a philosophical content expressing the mysterious nature of the Orient.

His poetic gift was also manifested in the cycles of verses written in the 1920s, and it can also be traced in his canvases devoted to people's life in, and the landscapes of, Turkestan. The introduction of musical rhythms in paintings enabled Volkov to express the strikingly bright features of Eastern life.

The wild pristine land, traces of ancient civilizations, and the patriarchal way of life of the native people - all this has enticed many European and Russian artists to make their "Pilgrimage to the Orient", but it was the natural environment for Alexander Volkov. His road was different - from the East to the West, and then back to the East. Perhaps, this road determined the characteristic features of his art, one that penetrated deeply into the life of the Orient.

The artist evolved his own artistic methods and manner that helped him create a rich variety of opulent, shining colours. They made Volkov the unsurpassed master of "The Pomegranate Chaikhana" - and an outstanding artist of the 20th century.

The invitation card shows Volkov’s “Wedding” from 1927: a trumpeter in vivid red plays a triumphant, festive melody, forming a colourful trio with the two Uzbeks beside him, in blue and green. In the long row of faces, frozen in silent contemplation of the mysteries of Life, one may distinguish that of Volkov himself: second on the right, he has a more European air than the others.

Alexander Volkov spent virtually all his working life in Central Asia. His paintings and drawings borrow from Eastern, as well as Western artistic and spiritual traditions. Although his work cannot be said to belong to the Eastern school, he sought always to convey the matchless beauty of his native land. Through Volkov's paintings, we feel the epic power of Turkestan: bright, flaming colours and heavy textures bring to life the main elements in the Asian landscape, present in everything - earth and fire, born of the sun. Volkov's works of the end of the 1910s - early 1920s produce a stained-glass effect due to the combination of light and colour. His characters combine the energy of the earth with a quiet submission to the whims of fate and the ability to experience the fullness of being in a limited space.

Born in the town of Skobelev, now Fergana, Alexander Volkov was the son of a Russian army doctor and, so it was said, of a gypsy woman picked up as a young girl by his father's detachment. Travelling with the army, the artist's father took his family all over Turkestan. From an early age, the young Volkov learnt to admire the beauty of Central Asian landscapes and art: the Fergana valley in bloom, surrounded on all sides by his beloved mountains; the starkly majestic Turkmen deserts, vivid Uzbek and Turkmen pottery, embroidery and silks, and the "woollen canvases” of the unique Turkmen carpets.

Upon finishing his studies at Kiev's School of Art in 1916, Alexander Volkov moved to Tashkent. He would remain here for the rest of his life, making various trips outside, mainly within Central Asia. Combining art with teaching, Volkov showed himself to be an excellent pedagogue. He was also a gifted poet: although he seldom spoke or wrote about painting, the verses he composed served to express his creative attitude perfectly. Sergei Esenin, who visited Tashkent in the 1920s, was much impressed by Volkov's verse, and invited him to join the Imaginists.

The desert wind would always sing
And camels always dream of Spring.
I'll remember pitiful and sad
The flower still burning in hot sand,
The one in chains on the camelback
Looks like an empty dusty sack.
All this a desert mirage black
Forever pictured on Earth's cracks.
From everywhere the red metal sighs
For wild call, for freedom signs,
My eyes are filled with sand and smoke –
Those companions whose mouths are closf
And beauties young with sparkling eyes
Reminded of golden breasts and thighs.
And camels always dream of Spring
The desert wind as always sings

Relatively constant in imagery, Volkov's art of the mid-1910s - early 1920s is extremely diverse in style. Refusing, by his own admission, to be a slave to any of the trends within contemporary Russian and European painting, the artist toyed with virtually all, from art nouveau to abstractionism, although never wholly departing from the world of real objects. Throughout all his experiments, he retained his own individual style. His main aim, at that time, being to create works which could be used in traditional Muslim architecture in the form of paintings, frescoes or stained glass, he constantly examined his efforts in the light of Central Asian art. Like Asian artists, he strove to understand the eternal workings of the visible world, using a European or, perhaps, a combined Asian and European approach. Among the themes and images recurring throughout his entire oeuvre are the caravan - the "desert carnival”, symbol of time's passing and of the sun's rotation; music, as Muslims, like the Ancient Chinese and Pythagoreans, were strong believers in its magical force, and the endless "debates” and "conversations” taking place in local chaikhanas, or teadrinking houses. As in the sacre conversazioni, or holy conversations, of Renaissance painting, Volkov's people converse with each other through their conversation with God. The mystical Muslim teaching of Sufism, then widespread in Central Asia, dwelt on man's individual communication with the Higher Being, largely through the use of narcotic drinks or other means, including poetry. Volkov's famous "Pomegranate Chaikhana” (1924) can justly be seen as the culmination of such "communication” from the 1910s and early 1920s. A profound reflection of Sufi spirit, this painting is also the most deep, striking and beautiful of Volkov's works from the point of view of colour. The composition is reminiscent of Rublev's "Trinity”, although if icons, as Pavel Florensky wrote, are "the door, through which divine essences enter the visible world”, in Volkov's canvases the real inhabitants of Turkestan perform a "silent zikr”, "...gazing,” as Saadi commented, "into the doorway of a different world.” The vital sign denoting the proximity of this other universe is the luminiferous colour of pomegranate - a hue considered deeply spiritual by many world religions. In Volkov's painting, the colour is remarkable in force and intensity, resounding with the highest joy which man can experience.

In the mid-1920s Volkov, like many artists worldwide, began to focus on more worldly, "real” themes. Revisiting his previous topics, he now portrayed not spiritual leaders, but ordinary people, although the colour and diversity of their lives, indeed, the very basis of their existence, still derived from moral and religious ideals. In making his characters realistic, Volkov did not follow the principles of naturalism: through the use of neoprimitivism, geometric generalisation and hyberbole, he still strove to convey the general through the specific. As previously, his characters were at once powerful - reminiscent of his much-admired Giotto, even - and mild, their strength stemming from a spiritual source.

Throughout the 1920s and early 1930s, the artist produced a broad panorama of life in Central Asia. His large and small canvases from this period show bustling kishlaks, or Central Asian villages; blooming young girls and mothers with children, who can be seen as symbols of Asia's growth; chaikhanas, where visitors not merely eat and drink, but, more importantly, go into a kind of spiritual trance; lovers chatting, tender yet calm, in Eastern fashion; potters, ploughmen, blacksmiths, camels being saddled, harvests gathered, folk celebrations in town squares, and, of course, countless musicians, bringing rhythm and melody into these lively, swirling scenes... However general the subject, Volkov always conveyed perfectly the emotional state of his various characters.

Deserving of special mention are the many, strikingly beautiful outline drawings and colourful watercolours created by Alexander Volkov in the 1920s and 30s.

In the early 1930s Volkov, like many of his colleagues, became fascinated by the rhythm and energy of the new era, with its ambitious infrastructure and industrial development. All around, new roads, factories and collective farms were springing up. In works such as "The Brick Making Factory”, Volkov captured perfectly the atmosphere of these busy construction sites, which promised Central Asia a brighter future. The cultural politics of victorious totalitarianism proved at odds with some of the main values of Volkov's art, however, such as his avant-garde aesthetics and respect for Eastern religious and artistic traditions. The new critics' demands that he "re-forge” his painting led only to dullness and lifelessness - although eventually he succeeded in renewing and, thus, saving his art. His gouaches and watercolours, as well as his many oils of the 1930s, mainly small works, depart from social themes to show man as a part of nature. The space of his paintings broadens, the style becomes more picturesque, form is conveyed in free, dynamic brushstrokes and colour modulation. The existence of man is governed by the rhythm of nature, man being the spiritual focus of natural forces.

Looking back on world history, in his "To the Poets of Georgia”, Sergei Yesenin wrote: "The mighty tribes in battle were plunged / Poets fought not amongst themselves.” Alexander Volkov, who contrived, through his art, to unite East and West, was precisely one such poet. 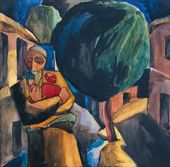 Grandfather and Grandson. 1926
Tempera and lacquer on paper. 24 by 24 cm. State Tretyakov Gallery