“Work is the sole pleasure”. Postscript to the exhibition of Zurab Tsereteli

The artist’s individuality and the scale of his talent are determined by his selfless devotion to his vocation, not by any awards and ranks bestowed. Tsereteli’s exhibition in Moscow’s Manezh demonstrated once again the industry and the versatility of the talent of one the most controversial and famous artists in Russia.

A sweep of imagination, a variety of artistic techniques and their emotionally charged associations, and an inner energy and expressiveness are a hallmark of Tsereteli's multifaceted artwork. His artistic talent has been acknowledged and held in high esteem by great artists of the 20th century - Marc Chagall, Pablo Picasso, David Siqueiros, Sergei Konenkov - who noticed and appreciated his inborn talent. His intuition, sensitivity and responsiveness, combined with a remarkable industry and range of vision, make the artist both an individual of note, and one who is ahead of his time. 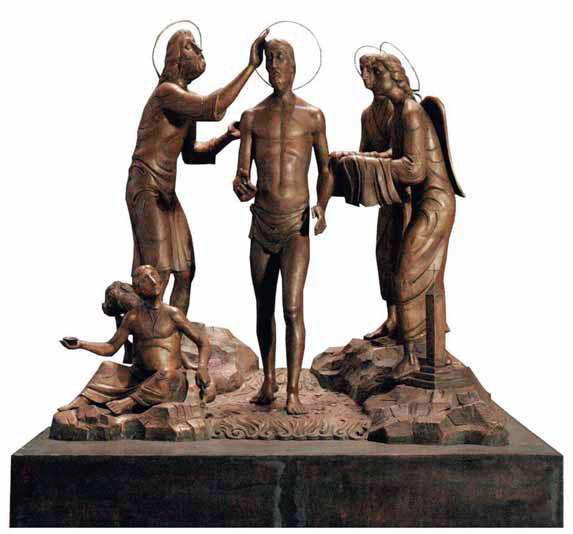 The solo exhibition of the works by Zurab Tsereteli impressed viewers with the sweep and versatility of Tsereteli's protean talent as an artist, a figure of phenomenal managerial skills, and a generator of ideas who has created an inimitable, distinct style in art.

Opinions about his work may vary, but one thing is certain - it never fails to arouse emotions. Tsereteli is in his element both as an artist and a public figure. Like few others, he can feel and understand the universal, humanitarian essense of existence. His art is full of zest for life, as the master's works compellingly show. Even a cursory acquaintance with the artist's work will broaden the viewer's outlook, and sharpen his or her sense of involvement with the facts and events of the past and the present.

The exhibition at the Manezh demonstrated once again that Tsereteli's work inspires a wide range of emotions in different individuals - and that his interpretation of reality is imaginative.

His paintings, monumental sculptural compositions, enamels and drawings manifest the artist's breadth of creative aspirations. "Work is the sole pleasure,” - a phrase coined by the poet Valery Brusov - became Tsereteli's motto. One of the exhibition's surprises was a series of paintings inspired by Tsereteli's sojourn in the Promised Land, and his travel across the localities connected with the Old and New Testaments and the Holy Land. But this is not just remembrance of things he saw; in Tsereteli's vision, this is a past directed at the present and the future. The episodes and individuals that the artist captured at the Wailing Wall in Jerusalem represent timeless images, condensed into majestic symbols and marked with their sharpness of movement and emotional expressiveness - images that symbolize the age-old collisions of the struggle for Faith. They have an inner passion, and a rich evocativeness and philosophical significance that is hard to describe in words.

The Biblical theme occupies a special place in the work and life of the artist; his perspective of what is momentary and what is timeless determines his attitude to the spiritual and moral values of modern civilization.

Tsereteli treats traditions of national and world art with particular care and tact; however, he never reproduces outward features of styles and trends which have been shaped for centuries. Tsereteli's work attracts the viewer with the highly unusual treatment of the blooming cultural heritage, the scope and character of the interpretation of images, and their originality - an individuality of artistic vision. The artist's oeuvres include several remakes, which compel the viewer to re-evaluate some well-known works, as well as events reflected in them.

Tsereteli's red-blooded, sparkling paintings are like a blast of energy, stirring up and energizing the viewer. His still-lives, colourful and fine-textured, radiate a distinctive inner light. The kaleidoscope of colours, the cheerful palette, the vigour of the lush strokes, the intensity of his compositions convey to us the artist's spiritual state - they are a kind of "self-portraits” of his emotional condition.

In fact, each of the artist's works represents his own self, with all of his individual traits and features. Thus, looking at the pieces dedicated to people with whom the artist feels an affini-
ty - for instance, Pirosmani or Charlie Chaplin - we unconsciously project their images onto Tsereteli himself. Undoubtedly, his international reputation derives primarily from his monumental sculptures - like the monument to Peter the Great and the sculptural composition dedicated to the friendship of nations in Moscow, as well as the monuments to Christopher Columbus in Spain and America, which serves as a kind of bridge spanning the Old and the New Worlds; and the architectural- sculptural composition in lerusalem, impressive in its content and unusual in concept, dedicated to the memory of the Holocaust victims and the prisoners of the concentration camps.

Among Tsereteli's major pieces, especially noteworthy is a series of haut-reliefs featuring distinguished cultural figures of Russia, from the Silver Age on to the cultural leaders of the 1960s. These sculptural compositions, unusual in form, style and emphasis, feature poets, musicians, actors and writers whose names and works are gems of Russian culture - Feodor Chaliapin, Sergei Esenin, Marina Tsvetaeva, Mikhail Bulgakov, Vladimir Vysotsky, and Bulat Okudzhava. The assemblage of more than 30 pieces, most of which were displayed at the Manezh exhibition, is a memorable series of images of personalities who are emblematic of the historical and international significance and uniqueness of Russian culture.

The compositional and sculptural concept of the series is certainly original. With all the expressiveness of the dynamic flux of the sculpted shapes, these pieces can be rightly called paintings cast in bronze and placed in massive wooden frames that create an illusion of a distinct inner space.

Not unexpectedly, the exhibition also included the maestro's enamels, distinguished by their craft and design, as well as sketches and drafts of his future works.

Tsereteli's future projects include a large-scale monument, based on the use of symbols and composite images, commemorating the American tragedy of 09/11 - the statue is to be erected across from Manhattan. In this project Tsereteli again demonstrated his universal talent, and a surprising skill of synthesizing various expressive means, accumulating the feelings and emotional experiences of individuals into a compassion felt by all mankind. A globule made of glass looks like a teardrop in the centre of a sculptural functional frame which, with all its monumental firmness, draws attention to this symbol of grief and memory. 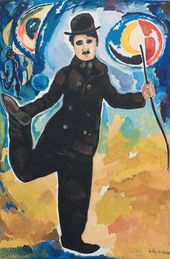 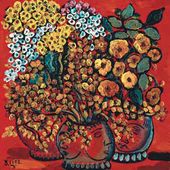 Meeting and Parting. 2005
Oil on canvas 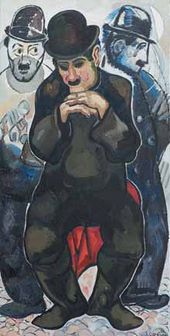 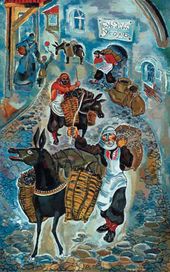 From the “Jerusalem” series. 2004
Oil on canvas

To a Friend with a Wineskin. 2003
Oil on canvas