Viktor Yefimovich Tsigal’ (1916-2005), graphic artist, painter, sculptor, writer, and a veteran of World War II, died one year ago. The exhibition in the halls on Prechistenka Street became a tribute to the master’s memory, showing all the facets of his versatile work: sketches from life and large elaborate graphic compositions, painting and metallic sculptures, book illustrations and everyday objects transformed into true masterpieces of arts and crafts.

This remarkable artist and his amazingly productive and sincere life are fully represented, and further critical description is hard: everything seems to have been said or written. Tsigal' won official recognition - various decorations, titles, and critics' esteem. But it was not by government decree that he became a "people's artist”. His works entered many people's lives, offering them the joy of contact with beauty.

His sincere and lyrical drawings from the front lines marked the beginning of the artist's creative development and eternalized the living memory of World War II. Several generations of children grew up with books illustrated by Tsigal' with kindness and gentle humour. The artist undoubtedly remains one of the best Russian graphic artists of the second half of the 20th century, and a creator of the original "graphic sculptures” made in the metalloplastic technique.

The exhibition in the Russian Academy of Arts provides an opportunity to enjoy the keen observation and artistry of Tsigal's graphic techniques, the compositional mastery and discreet colouring of his canvases, the graceful contours and audacious perspectives of his sculptures, and the delicate taste and sense of style of his decorative works.

However, the list of Viktor Tsigal's formal merits does not explain the magnetic magic of his art, the captivating feeling of a miracle at hand that seizes any viewer who stands before his works. Tsigal's art is devoid of psychological tension and dramatic conflict, nor does it offer any gaudy compositional or painting effects. The artist always avoided social themes and "high” subjects, preferring the everyday phenomena of nature and people's lives.

His unique talent consisted in gaining an insight into life and sharing his vision with the viewer. Each of his works contains more than just visible lines and spots: in the simplest, transient moment, image or landscape, the artist could find the essence constituting its true beauty and higher meaning. It was not by accident that in 1945, at an exhibition in the Pushkin Museum of Fine Arts, the censors took down the drawing "Catching Up on Sleep” by the then very young Tsigal'. The realistically drawn, simple image of a boy driver slumped asleep over his steering-wheel personified, with amazing power, the incredible burden of war, and the austere non-heroic aspect of its heroic everyday existence.

The artist always finds a stroke, a detail that gives his work plastic and semantic perfection and builds up the idea. The cautious and fearful gesture of a boy clasping to himself the last chicken in the village, the alarming vertical of a pole with a loud speaker in the fathomless blue sky ("Listening to a Sovinformbureau Report”), the festive orange colours of a wedding cortege on a street in Holland - such "small things” organize the compositional harmony of Tsigal's works, moving them out of a given concrete reality.

At the same time, Tsigal's art is devoid of the abstractness and emotional coldness of an outside observer - he is not a reporter but a compassionate or admiring participant in what is going on. The artist treats his work in a very delicate way, not trying to change the models but revealing all the best and most important in them to show to the viewer.

Figurative means were nothing for Tsigal' but figurative means, by his mastering of which he transformed reality without losing his art's veracity. The artist's masterly plastic language had its root in his innate gift for drawing. His art is extremely intimate and dynamic. A graphic sheet is rather illusory and nimble by nature. A line, shaping the drawing as a whole, just outlines the image and space, leaving enough flexibility for our imagination.

Tsigal's drawings embody the "motive” power of the graphic arts in a particularly vivid way. He ties a composition up with precise, impetuous lines, without forgetting about minor details. Tonal and colourful spots seem to slow down the lines' rush but they do not stop the space's changeability. When finished, the drawing sounds integrally, like an orchestra where every detail plays its part at the appropriate moment.

The "graphic” activity in space transformation is also inherent in Tsigal's painting but it is his sculptures that show it at its most original. The flat silhouettes, as if traced by a draughtsman's sure hand, imperiously intrude into our three-dimensional space from an unreal beautiful world and seem to be materialized projections of a threedimensional, living original.

Even in the officiously crude themes of the Soviet era - the "Red Guards” and "Subbotnik” sculptures - the master concentrates on expressing the impetuous movement, and the powerful and particularly cheerful energy of the revolutionary epoch. As does all of Tsigal's art, these works appeal to us because of their sincerity, their natural and audacious conception and their faith in high ideals.

Tsigal's world view is constructive, aimed at revealing the light side of human nature. The man in his works is always organically united with his brothers and with a nature with which he is at one. His art will always attract us with its optimism, and sincere belief in the goodness and purity of the surrounding world.

"I'm simply a painter,” Viktor Tsigal' used to say about himself. This modest and proud definition encapsulates the meaning of all his life and work. "A painter fills a certain area with some contents, compresses the contents into it, thus making the space yield and accommodate more than it would accommodate without this effort,” wrote Fr. Pavel Florensky. Tsigal's art is, probably, this kind of space filled with beauty. 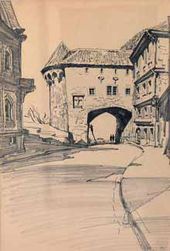 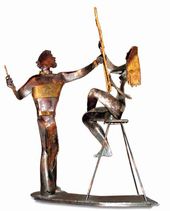 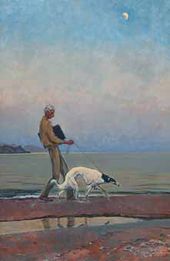 Self-portrait with Diana. 1984
Oil on canvas