The Museo Thyssen-Bomemisza, Madrid opened a major exhibition of the Russian avant-garde at the beginning of 2006 (February-May), the first of its kind in the Spanish capital. Entitled “Vanguardias rusas” and based on works from the Tretyakov Gallery, the Russian Museum, Russian regional museums and other public and private collections, the exhibition emphasized the interdisciplinary nature of Russian Modernism. Apart from major paintings, including, incidentally, Goncharova’s “Fishing” (1909) and Larionov’s “Baker” (1909) from the Museo Thyssen itself, the selection encompassed sculpture (including two Cubist pieces by Baranov-Rossine), book design (by Lissitzky and Stepanova), applied arts (including examples from the archive of the Decorative Institute, Leningrad, shown here for the first time), commercial design (such as movie posters by the Stenberg brothers), agit-propaganda (such as street art by Al’tman and posters by Klutsis), porcelain, textile designs and photography (including work by Ignatovich and Rodchenko), to mention just a fraction of this panoramic repertoire.

The chief curator of "Vanguardias rusas” was Tomas Llorens, a historian of European and American Modern-ism, who cultivates a special interest in the relationship between experimental artistic expression and the political left. Together with a team of international scholars, but pursuing his own conception and interpretation of the accomplishments of the Russian avant-garde, especially in its European context, Llorens assembled the exhibition of almost 300 pieces and edited the catalogue (containing essays by Russian and Western specialists). The result is a rich and memorable survey which prompts the viewer not only to marvel still at the energy and vitality of Russia's visual renaissance, but also to ponder on more pointed questions such as the creative individualities (rather than group affiliations) of the artists represented, on the manifest connection between Constructivism and the October Revolution, on the independent, formal qualities of Russian abstract painting and on the often tragic tension between radical aesthetic structure and patent propaganda.

In order to present the achievements of the Russian avant-garde to a broader community, Llorens and his colleagues also organized an international and interdisciplinary symposium which touched on numerous issues. Introduced by Guillermo Solana, Chief Curator at the Museo Thyssen-Bornemisza, the debate focused on the prehistory of "Vanguardias rusas” (Llorens), the French connection (Ekaterina Selezneva), the indigenous tradition (Evgeniia Petrova), optics (John E. Bowlt), modern dance (Nicoletta Misler), Futurist poetry (Sjeng Scheijen) and historiography (Szymon Bojko). The proceedings of the symposium will be published.

During the event, Tomas Llorens, Nicoletta Misler and John E. Bowlt conducted a conversation - a kind of tripartite interview with leading questions addressed to Llorens - concerning the exhibition. The record of this interchange is published here.

NM: There have been many exhibitions of the Russian avant-garde recently, especially in Europe and the US. Right now, for example, there is a major exhibition of 20th century stage design at MART in Rovereto with an impressive Russian contribution and, as you know, much of the Europalia in Belgium this winter was devoted to modern Russian art, including a highly commendable showing of the avant-garde. In spite of such rivalry, however, "Vanguardias rusas”, and I like the plural, is especially rich and comprehensive with its focus on Cubo-Futurism, Suprematism and Constructivism and we are especially glad to see works from less familiar depositories such as the Instituto Valenciano de Arte Moderno, Generalitat Valenciana (IVAM), Astrakhan and Nizhny Novgorod. I'm also very struck by the section devoted to the works produced by the Decorative Institute in Leningrad in the early 1920s (from the State Russian Museum), like the agit-trays designed by Frents, Kletenberg and their colleagues. I had not seen these before.

JB: Yes, I agree, "Vanguardias rusas” contains a number of unfamiliar works and also a few mysteries, including the bizarre, anonymous tray with the stampeding cow! On the other hand, I suppose that the chronology of the avant-garde presented at "Vanguardias rusas” does not differ too strongly from the traditional assumption. Had there been space, I know that Tomas would have included a Symbolist section, of course, as a precedent which already indicated fundamental formal and thematic ideas which the avant-gardists were to develop later. In any case, exhibitions of this kind are always voyages of discovery, even for enthusiasts such as Nicoletta and me who have been studying the subject for many years. Incidentally, Tomas, Nicoletta came to the avant-garde via a political sympathy in the 1970s and I came to it via Symbolist poetry in the late 1960s, but how do you explain your interest in the Russian avant-garde?

JB: I suppose that, in toying with these issues, your fond dream had always been to organize a visual demonstration of your ideas, i.e. an exhibition. I know that both Nicoletta and I are fascinated by this passage between intellectual concept and material presentation and we all know how an exhibition of real works in a threedimensional space both extends and sometimes distorts the theoretical concepts with which we begin. Tomas, what were and are your concepts of the exhibition and its installation here in the Museo Thyssen-Bornemisza?

TL: As you know, I am not a specialist in Russian art and my approach to the subject is that of an outsider. On the other hand, this exhibition, by its very nature, possesses a very wide scope and, basically, is meant to provide a general overview of the field to our public. What I have tried to do, however, has been to consider other surveys made at analogous exhibitions in the past and to try and correct - or edit - certain of their aspects. If I may mention the main points where my reading of the Russian avant- garde seems to differ from other assumptions, I would emphasize three. First, the Russian avant-garde is usually regarded as the result of an interplay between Western influences (mainly Paris) and the national conscience of Russian elites. Traditionally - the first pole has been emphasized, but I have tried to amend that view by underlining the second, national element, which, of course, implies a stronger accent on the so-called primitive. Second, traditional accounts of the Russian avant-garde afford substantial importance to group activities and doctrinal declarations and try to establish an intelligible schema of linear development amongst these things. But I think that this can lead to all kinds of historiographical problems and I have tried to distance myself from them by de-emphasizing the role of groups and ideologies and by emphasizing instead the individual work of individual artists. In turn, this strategy justified a stronger presence of artists such as Filonov in the exhibition. Third, I have tried to make the impact that the October Revolution had on artistic production more visible and to signal how the Revolution stimulated the demands for a utopian change in the nature of art itself. You, John, may not agree wholeheartedly with this point, but I have always found it to be vitally important.

JB: That's okay, although I'm always worried by the way in which some observers of the Russian avant-garde jump automatically to the conclusion that it was generated by social and political agendas. When I think of "apolitical” artists such as Kandinsky and Kliun, I do wonder about the solvency of such an argument. But it's extremely complex, to say the least.

NM: Yes, it's an intricate issue, but I, for one, recognize a political pattern in the evolution of the Russian - and other - avant-gardes, for example, in Italy. In its first phase, Italian Futurism may not have been linked organically to any particular political system, but, as we all know, it ended up as a rather close collaborator with the Fascist regime. Incidentally, do you, Tomas, distinguish any parallels between what was happening in Russian culture of the 1910s-30s and Spain?

TL There were some parallels, but the differences were enormous. Both the national conscience and the call for modernization were much weaker in Spain; and of course here there was no revolution, strictly speaking.

JB: I'd like to move away from politics, because I'm so ill versed in that area, and to think more about "Vanguardias rusas”. Tomas, why is the Museo Thyssen-Bornemisza such an appropriate venue for this exhibition? After all, Madrid has several splendid museums, not least the Prado, which might have been considered as venues, no?

TL: The Museo Thyssen-Bornemisza has, as you know, a concentrated and significant collection of the Russian avant-garde, including wonderful paintings by Goncharova, Larionov, Rodchenko, Rozanova and Stepanova. The Museo also possesses very rich holdings in 20th century French, German, Spanish and American art, with good representations of Picasso, Braque, Dali, Klee, Pollock and so on. Consequently, in Spain the Thyssen-Bornemisza collection provides a fine context for examining international art of the first part of the 20th century, including, of course, Russia. I can't think of another museum collection in Spain that combines these merits.

NM: Well, in spite of John's reticence, I'd still like to pursue our political line. After all, the final, Soviet section of "Vanguardias rusas” contains highly charged political imagery, I mean, for example, the Klutsis posters showing Stalin, the five year plans, etc. or the Rodchenko photographs of gymnastic displays. So, Tomas, as curator of the exhibition, how did you deal with the problem of political and social context?

TL In the latter part of the exhibition, i.e. the one that deals with art after 1917 and to which you refer, I have tried to emphasize the general impact of the October Revolution on the artists involved. This is why I placed Tatlin's "Monument to the Third International”, I mean, the digital reconstruction which the computer specialists at the Russian Museum created for us, at the very centre of that section. The subsections devoted to photography and the graphic arts show how strong the pressure to change the nature of art itself was. True, the artists of the Russian avant-garde were caught in a logical contradiction here: on the one hand, the notion of the avant-garde implied the autonomy (and, therefore, the uselessness, in the Kantian sense) of art itself as a spiritual activity; on the other, the equation that they tried to establish between a political (or revolutionary) avant-garde and an artistic avant- garde seemed to demand the dissolution of traditional art forms into useful activities at the service of the Revolution. In other words, images had to cease being art in order to become propaganda. I believe that herein lies the key to the tragic fate that befell the Russian avant-garde during the 1930s.

JB: Well, with this in mind, what would you change if you were to curate another exhibition of the Russian avant-garde? Would you try to demonstrate this contradiction even more trenchantly?

TL: I do not know really. But I do think that I would emphasize the role of individual artists even more. I would also like to know more about the social and political context of the Revolution. As an art historian, my knowledge of the subject is still too scant and superficial.

NM: Alas, you are right, our knowledge is always lacking. But we all agree, surely, that exhibitions and concomitant events of this kind help to fill gaps, confirm or dispel certain assumptions and force us to look at these extraordinary artworks once again - only to raise more questions, of course! 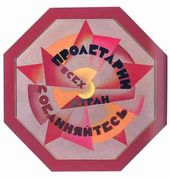 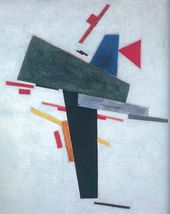 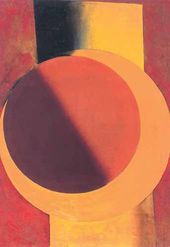 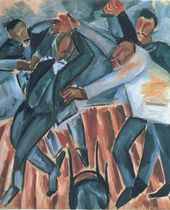 Mikhail LARIONOV. Quarrel in a tavern. 1911
Oil on canvas. 72 by 95 cm. Thyssen-Bornemisza Collections 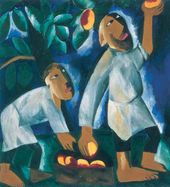 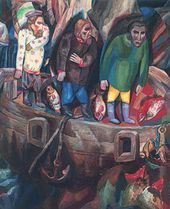 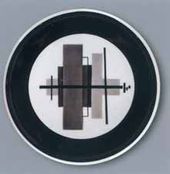 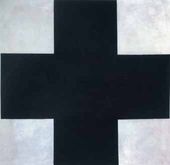 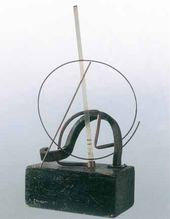 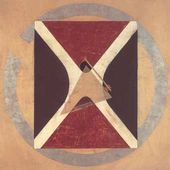 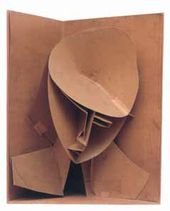