"To love and understand nature"

From February 14 2006 to March 5 2006, the Academy of Arts hosted a solo exhibition of Efrem Ivanovich Zverkov, a People’s Artist of Russia, Vice-President of the Russian Academy of Arts (21 Prechistenka st., Moscow), and a laureate ofvarious state prizes, celebrating the painter’s 85th birthday. Although the works displayed were not numerous, they illustrated well the evolution of Zverkov’s artistic style as well as his artistic search and discoveries.

Zverkov is one of those Russian artists who were young at the time of World War II. The people's suffering and torment permitted the painter to appreciate more the joys of everyday life, the basis of human happiness. Contemplating the modest beauty of Russian nature, enjoying the fact that its vast plains were no longer covered with ugly bomb holes, the artist who spent his childhood in the countryside among fields, meadows and woods decided to dedicate himself to landscapes.

Zverkov was born into a large family in the region of Tver. Life was harsh and poor but his father, who had only received four years of schooling, read much and made his children enjoy reading too. When the boy went to school, his craving for knowledge made it easy for him to adjust to a new environment and to make friends with other children. While studying, Zverkov learnt more about Russian culture and gradually decided to dedicate himself to art.

After becoming a student of the Surikov Art Institute in 1947, Zverkov started to acquire artistic skills and to gain knowledge of drawing and composition. He improved his technique quickly thanks to the good relations he had with his teachers, including P.V. Malkov, V Tsiplakov and A.M. Gritsai. His acquaintance with A.A. Plastov was especially important for Zverkov as Plastov became the actual supervisor of his graduation project.

A move towards genre painting was natural for artists in the 1950s, as at that time genre scenes were considered fundamental to the art of painting. Zverkov, on the contrary, was interested in "plein air” painting and landscapes which gradually became a priority in his work.

The artist is fond of vast spaces and panoramic views, and he has created very few paintings where nature is depicted as a small spot seen from high above. On the contrary, broad perspective characterizes his works that, at the same time, do not present separate scenes snatched from real life but always have a clear composition and meaning. Moreover, the artist has a unique intuition for colour: he knows how to choose a colour set and his paintings speak the language of art, not that of literature.

As the end of the 1960s, elegiac and peaceful motives entered Zverkov's art: he was setting artistic goals and developing his colour set, studying a rich variety of tones. His brushwork became gentle, light and almost transparent. His landscapes of that time are infused with soft emotion and evoke deep feelings, emotion being the key trait of Zverkov's art. His works have a wonderful quality: they seem clear at first sight, but dwelling on them the viewer becomes overwhelmed with the artist's deep emotion and the complexity of the painting filled with sincere love for his native land.

One of the main traits of Zverkov's art is his ability to show light and air in their interaction with colour. He manages to capture the elusive combinations of light, shade, and air, and the warm tones of a bright summer day.

With the passing of the years, it became difficult for the artist to paint in the open air, and he continued to work in his studio using his previous experience. Nevertheless, his later works are as sincere, clear, deep, poetic and pure as his earlier ones.

Zverkov's art teaches us to love and understand nature, Russia and the fatherland. The feelings it encourages are unobtrusive, subtle, deep and sincere - the same love that the painter experienced himself. 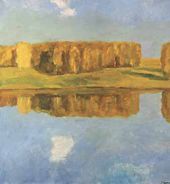 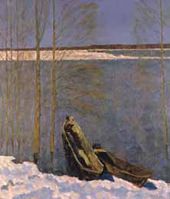 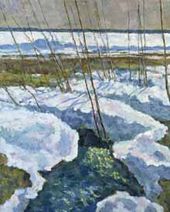 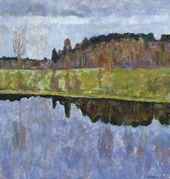 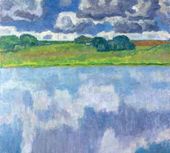