A personal exhibition of Max Beckmann (1884-1950), on show in the Old National Gallery in Berlin from December 2005 to March 2006, allowed many visitors to rediscover the universe of one of the brightest representatives of German art of the first half of the 20th century.

Born in Leipzig, Beckmann studied at the Weimar Art Academy where he met Minna Tube, a kindred spirit and soul mate, who soon became his wife. One of the features of the exhibition in Berlin was to present the lesser-known works of Minna Beckmann-Tube, herself a talented painter and Beckmann's favourite model.

In 1903, wishing to broaden his horizons, Max Beckmann went on a trip to Paris and then to Geneva. After his return, he settled down in Berlin and participated actively in the art life of the German capital, becoming acquainted with such key figures as Max Liebermann and Lovis Corinth, founders of the Berlin Secession movement who influenced many of his early works. Beckmann was noticed and soon became well-known in German art circles. In 1906, Beckmann, the painter of expressive and to a certain degree sentimental portraits and of vivid and lively landscapes, was awarded the Villa-Romana prize and a scholarship to travel to Florence. In 1910, he was elected to the executive board of the Berlin Secession. At about the same time, Beckmann's first exhibition was organised and a monograph devoted to his work was published. However, Beckmann felt the limitations of the declining style and became disappointed in those whom he had recently admired, and in 1911 he resigned from the board of the Berlin Secession. The artist gradually rejected romantic dreams and sentimental illusions, and his works of the period betray anxiety, tension and colour vibration. Visions of a future, though yet unclear, changed his attitude towards the world around him: idealistic images steadily disappeared from his works, a factor well illustrated by Beckmann's self-portraits presented at the exhibition. It seems that many artists of the period experienced similar disappointment and anxiety. These emotions are noticeable in the works of Ernst Ludwig Kirchner, Karl Schmidt-Rottluff, Erich Heckel and Max Pechstein, founders of German expressionism and the "Bridge” group, as well as in the art of the "Blue Rider” painters, among whom were such Russian artists as Vasily Kandinsky, Marianne von Werefkin, and Alexei von Jawlensky. The early 20th century was marked by a vigorous rejection of the ideals of the past. Cubists, fauvists, expressionists and futurists were creating new works of art emphasizing the personal feelings and individuality of artists whose aim was to create their individual universe and not simply to reproduce past models.

Like other German painters, Beckmann found new themes and images in the kaleidoscope of contradictory events of modern urban life. Many paintings displayed at the Berlin exhibition illustrate the artist's changing attitude towards the world around him and his acute sense of time and change, for example "Tauenzien Street” and the "Street at Night” from 1913.

World War I ruined the world of which the painter was a part. Beckmann, like many artists, had to join the army. Franz Marc, August Macke and Alfred Weissgerberg were killed at the front, while Kirchner, Otto Dix, Erich Heckel, George Grosz and Beckmann himself returned home changed by the battlefields. Deeply affected by the war years, they introduced dramatic and sarcastic motives to their art, filling it with new dominant meaning, unmasking baseness, hypocrisy and the depths of human suffering. Back from hell, Beckmann, unlike others, continued to work hard. He tried to share his feelings and experience through a sense of the grotesque. In 1915, in the middle of the war, he wrote: "I have never kneeled before God or anybody else to achieve success, but I would go through cesspits, humiliation and shame to continue to paint ... The ideas of the form that lives inside me should go out to the very last drop ...”

One of the characteristic examples of this new attitude to life and art is "Night”, created in 1918-1919 and belonging to the Kunstsammlung Nordrhein-Westfalen in Dusseldorf. The painting represents the artist's vision of violence, bestiality and cruelty proper to fallen man. Its composition consists of geometrical lines, figures and objects that together depict a harrowing scene of vandalism and emphasise the feeling of tragedy, physical pain and ugliness. Because of its contrasting colours, the characters are distinguished and seem to be cut out against the surface of the canvas and resemble medieval reliefs. Intense drawing adds to the tension. "Synagogue”, a landscape painted in 1919 and displayed in the Stadel Art Institute in Frankfurt, creates the same effect.

These works serve as a warning and provide symbols of human tragedy; the strange and mysterious universe created by Beckmann's horrified imagination has no exit. His paintings betray his doubts, anxiety and unease. The artist remembered the horror of the gas attacks, suffered a nervous breakdown and had nightmares. Living in Frankfurt from 1917 to 1933, he continued to work hard, taught art and participated in national and international exhibitions. He often spent winters in Paris. In the mid-1920s, the tendencies of European neoclassicism appeared in his works. However, they do not dominate Beckmann's art in which mystical, ironical and grotesque improvisations on important issues of human existence prevail. Beckmann shatters the myth that harmony reigns in the world, juxtaposing it with severe and pitiless reality. The artist's works can be read as disturbing parables which haunt the imagination and inspire complex and contradictory feelings. They resemble stained glass windows or gothic reliefs, and might even be compared to the power of organ music.

For his originality, unique artistic techniques and psychological insight the artist was awarded the Carnegie Prize in 1929. Without being socially engaged, Beckman's art poses questions of general
importance for humanity; the painter is interested in what happens to the individual and to society as a whole.

After the Nazis came to power in 1933, Beckman, having been forced to resign his position at the Stadel Art School where he had taught as a professor for many years, moved to Berlin. In 1937, he had to emigrate to Holland.

True to his principles, Beckman did not renounce them even in hard times. His paintings became even more striking and acquired new metaphorical meaning. At that time, he painted the "Self-portrait in a Black Beret” and the "Organ- grinder”. In 1939, the painter was awarded the first prize at the San Francisco international exhibition. Up until the end of World War II, he was in hiding from the fascists in Amsterdam. Two years later, he was invited to the USA to teach art, first in St. Louis and then at the Brooklyn University Art School in New York. He was once again awarded the Carnegie Prize as well as an honorary doctorate by Washington University in St. Louis, and a Grand Prix at the Venice Biennale in 1950.

During his American period, Beckmann created such important and well- known paintings as the "Perseus” triptych, "Two Women”, "Tango (Rumba)”, "Still-life with Three Glasses”, "Woman with a Snake” and "Beginning of the Rhythm”, exploring in the latter the traditions of African culture and its ethnic roots, choosing a perspective that emphasizes the brutal motives of his painting. All these works impress by their global vision, multiple allusions and rich colour scheme.

Max Beckmann's works, though unique and highly individual, reflect the main tendencies of German expressionism. It enriched 20th century art with new images and colours as well as with a deep philosophical attitude to the surrounding world.

The Berlin retrospective of Beckmann's work illustrated the complex evolution of his art, imagery and style, and helped to rediscover the characteristic traits of his multi-faceted talent. The self-portraits presented at the exhibition helped viewers to understand the emotional and spiritual changes that the artist went through - from the early romantic enthusiasm and idealism to the experienced maturity of a true thinker and prophet. His paintings and graphics reflect the dramatic contradictions of the whole epoch and betray warnings and anxiety for the future of our civilisation. In his energetic and forceful works, artistic search and discoveries Max Beckmann is a precursor of a new understanding of the social importance of modern art.

Beckmann had many followers among whom we can name Bernhard Heisig, one of the leaders of modern postexpressionism. 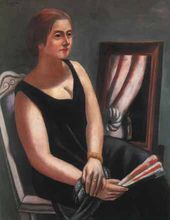 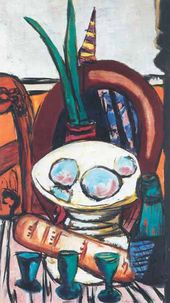 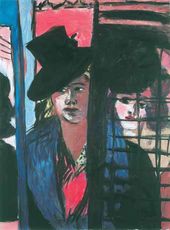 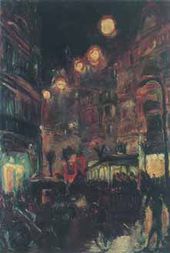 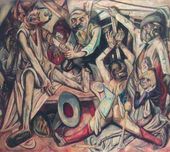 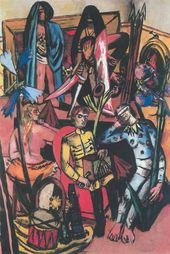