The State Museum of Fine Arts of the Republic of Tatarstan

Celebration of the 1000th Anniversary of Kazan

The exhibition based on the collection of the State Museum of Fine Arts of the Republic of Tatarstan, which is currently on display at the Tretyakov Gallery as part of the project "Russia's Golden Map", has a special significance given that Kazan is celebrating its 1000th anniversary this year.

For centuries Kazan has been one of the oldest cultural centres in the country. The Kazan University, opened in 1804, played an important role in the formation and development of Russia's scientific and artistic traditions. Artists who had received their professional training at St. Petersburg's Academy of Arts, the Arzamas Stupin Art School and other institutions, taught art there.

University expeditions provided sufficient finds to form the core of collections of the ethnographical and archaeological museums, as well as that of the Museum of Fine Arts and Antiquities. Such well-known researchers as N.N. Lykhachev, D.V. Ainalov, and V.K. Malmberg, whose work was later acclaimed in Europe, started their scientific careers at the department of history and theory of art here.

The "Peredvizhniki" (Wanderers) exhibitions of 1874, 1886 and 1889 influenced the cultural life of the city, stimulating the interest of the general public in the fine arts. In 1895, on public initiative and with the support of the Academy of Arts, the Kazan Art School opened, soon becoming a centre of the city's cultural and artistic life; the School presented annual exhibitions, with prominent and famous Russian artists taking part.

The opening of the first public museum with an art section became a logical result of such developments. Its history dates back to 1895, when the vice-admiral of the Russian fleet Ivan Lykhachev donated to the city the collection of paintings, drawings and prints of his late brother Andrei Lykhachev (1832-1890), the Kazan archaeologist and regional ethnographer.

The founder of the collection, Andrei Fedorovich Lykhachev was of noble origin. After graduation from Kazan University in 1853, he served for five years as a clerk in the office of the Kazan governor. Then he retired to pursue his passion of collecting art, and this passion "became the meaning and justification of his whole life."

Lykhachev inherited both a love of collecting art and the family collection of "old elegant fine things". Thirty years later, thanks to his ardent efforts, the collection had grown so large that he was able to make a kind of a private museum out of it. The collection consisted of more than 40,000 items: it contained archaeological and ethnographical finds, a unique set of Bulgary antiquities, ancient Egyptian and Greek curiosities, more than 25,000 coins and medals, and 2,500 prints. All pieces were fully listed and studied and system-atised in accordance with scientific principles. Lykhachev's library comprised about 1 50,000 books, brochures and atlases on history, archaeology and art. His home picture gallery included more than 400 works by Western European and Russian artists, as well as his own amateur works. The largest part of Lykhachev's collection consisted of works by West European artists of different schools and epochs that he bought during his trips abroad in the 1860s and 1870s. The Russian part included 98 pictures; Ivan Shishkin, Vasily Khudyakov, Vasily Perov, Leo Kamenev, Alexander Gineh and Firs Zhuravlev - who were either Lykhachev's acquaintances or friends - painted most of them. The collection also contained pictures by masters such as Dmitry Levitsky, Vasily Tropinin, Ivan Aivazovsky and Lavr Plakhov. 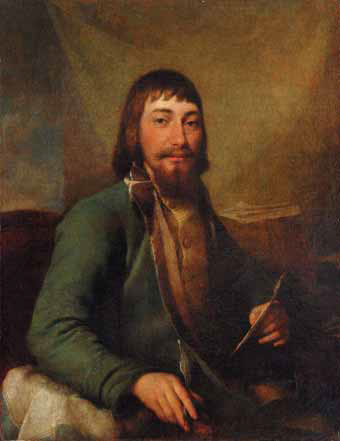 During the first years of its existence the art fund of the museum grew rather slowly, mostly thanks to private donations or acquisitions from collections owned by notable citizens, such as the vice-governor of the city, Prince Golitsyn, the district marshal of nobility Boratinsky, and Tolstoy- Miloslavsky, and Kazan University professors Mironov and Dubyago.

A new stage in the museum's history began after the 1917 revolution. The collection was expanded with works and items from the nationalised mansions and from closed and ruined monasteries. Some works were also sent from the State Museum Fund and from the repositories of the museums of the capital, from Kazan University, while others were donated by private owners or bought from art collectors.

Valuable contributions were made by the Kazan scientist and doctor, V.S. Gruzdev, and by a collector from Moscow, E.D. Myasnikov, himself a native of Chistopol, a town in the Kazan region. The first donated Ilya Repin's early work "A Young Woman Reading", while the second passed over to the museum works by K.F. Bogaevsky, N.V. Meshchersky, R.R. Konchalovsky, I.E. Grabar, and A.I. Milman.

At the same period a large collection of pictures that had belonged to Olga Alexandrova-Geins, the rich heiress of a Kazan tea merchant, was added to that of the museum; it contained more than 50 works by Russian artists from the realistic school of the second half of the 19th century, including genre pictures by R.O. Kovalevsky, K.A. Trutovsky, V.E. Makovsky, and landscapes by A.V. Gineh, L.F. Lagorio and I.I. Shishkin. In addition, there were portraits of Olga Sergeevna and her husband, the general-governor of Kazan, A.K. Geins, painted by Repin.

In 1920 the museum marked its 25th anniversary and was granted the status of the Central Museum of the Tatar Republic. To celebrate this jubilee the State Museum Fund passed over a huge collection of works by the artists from the end of the 19th century and beginning of the 20th century to Kazan. Canvases by Konstantin Bogaevsky, Igor Grabar, and Sergei Ivanov; still-lives, landscapes and compositions by Natalya Goncharova, Mikhail Larionov, Riotr Konchalovsky, Ilya Mashkov, Vasily Rozhdestvensky, Aristarkh Lentulov, Robert Falk and Riotr Utkin; and sculptures by Sergei Konenkov, Nadezhda Krandievskaya and Ivan Efimov were displayed at a big art and science exhibition, which opened in Kazan. That was by no means the largest contribution - or the most valuable for its artistic quality - to the museum since the its opening. The State Tretyakov Gallery also helped to enlarge the collection: works by Maxim Vorobyov, Vasily Tropinin, Grigory Chernetsov, Illarion Rryanishnikov, Vasily Vereshchagin, Mikhail Nesterov and Alexander Kuprin and by many other famous artists were passed to the museum. The State Russian Museum also carried on this tradition by presenting works by Ilya Repin, Valentin Serov, Nikolai Roerich and Nikolai Krymov. 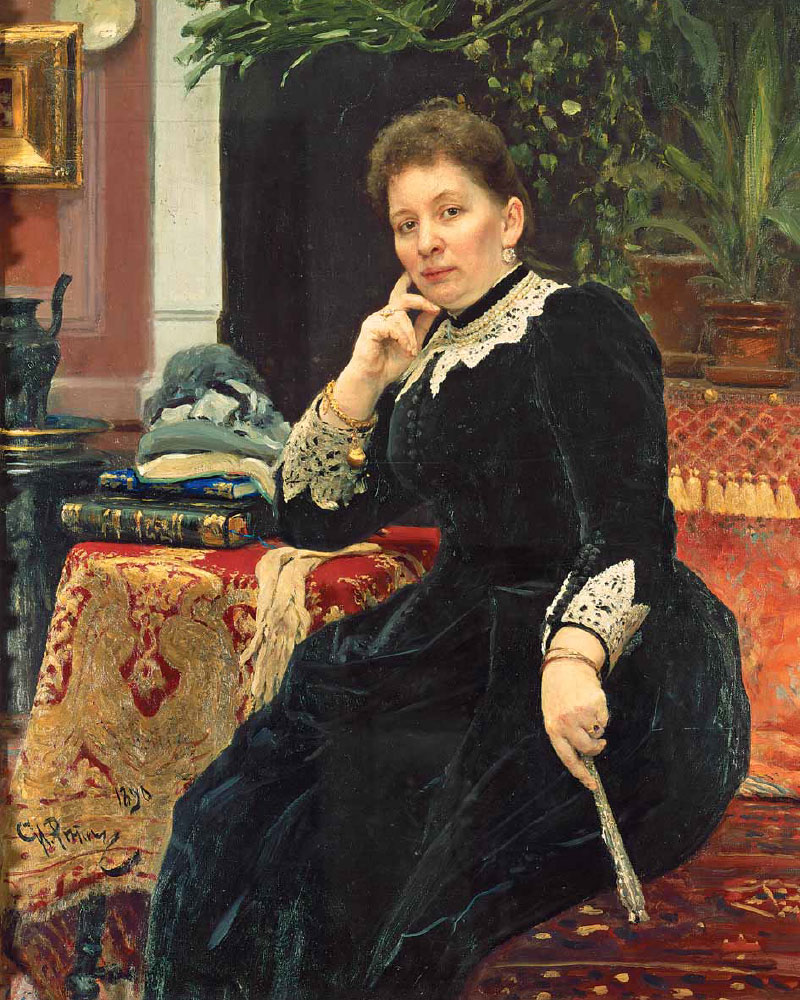 The expanded collection had to be studied and analysed as quickly as possible. Museum enthusiasts, including the art hist orian and artist Riotr Dulsky (1879-1956) and his colleagues Riotr Kornilov (18961981), Vasily Yegerev (1886-1956) and Ravel Radimov (1887-1967) organised and restructured the work of the museum in a new way. Due to their efforts, the art section was turned into the picture gallery of the museum.

Thanks to Dulsky, the fund of works of local artists, such as Nikolai Fechin, P.P. Benkov, Grigory Medvedev, Vasily Timofeyev, Konstantin Chebotaryev and many others, was formed. The museum printed catalogues of almost every exhibition and published the magazine "Kazanski museinyi vestnik" (Kazan Museum News) even during the difficult years of the 1920s.

Dulsky was the first to study Tatar national culture, and also one of the first to pay attention to art typical of the Tatars. He drew attention to the high artistic quality of Tatar jewellery and calligraphy, and stressed the unique design of the wooden architecture. He singled out the exclusive leather mosaic and the beauty of the national costume, organising expeditions where he started to collect items of Tatar folk art.

At the beginning of the 1940s the collection of the art gallery acquired a set of works from the school museum of Kazan Art College, consisting of the gifts of the Academy of Arts and of the works of its teachers and students. The largest part of that collection comprised graphic works by R.A. Shillingovsky, Anna Ostroumova-Lebedeva, Pavel Kuznetsov, David Shterenberg and others. On Kornilov's initiative a collect-ion of engravings was compiled.

The collection of Russian painting was mainly formed before World War II.

In the ten years to follow the Ministries of Culture of Russia and of Tatarstan donated some works belonging to the Russian school of art.

In 1959, in accordance with a directive of the Russian Ministry of Culture, the picture gallery of the State Museum of the Tatar Republic was transformed into an independent Museum of Fine Arts. Galina Mogilnikova (1928-2001) became its first director. The creative work of Russian masters and that of artists of the Kazan region, the history of the artistic life of the city and the heritage of the Kazan collectors - such a list of her scientific interests is far from complete. Collecting the works of the outstanding Kazan artist, Nikolai Fechin, and organising exhibitions, she made his name known worldwide.

In 1 967 the museum collections were moved to a two-storey building. It was built in the centre of the city at the beginning of the 20th century by the architect F.R. Amlong for the commanding officer of the Kazan military district, General A. Sandetsky.

Since the 1950s the museum has been actively gathering material on painting, graphics and sculpture by contemporary Kazan and republican artists. Today, the folk art section, the most considerable in the collection, represents the traditions and the present state of painting in the republic comprehensively.

The collection of the State Museum of Fine Arts of the Tatarstan Republic today comprises more than 25,000 exhibits. To celebrate the 1000th anniversary of the city the Museum will display its treasures in its main building and in its new subsidiary, the Art Gallery in the Kazan Kremlin - the precious heritage of masters of past centuries, historical relics, unique art collections and a vast collection of works by modern artists. 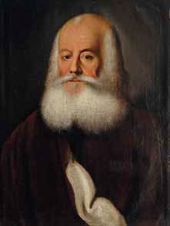 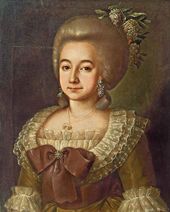 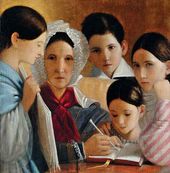 Anonymous, First half of the 19th century. Portrait of the Enatskis. 1839
Oil on canvas mounted on cardboard. 71 by 67 cm 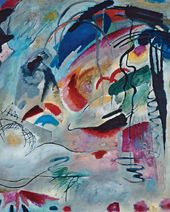 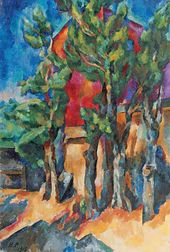