It is rare to find British art in Russia, either in museum collections, or, still more so, those in private hands. Most of the significant works and those of less artistic value have been exhibited in two recent exhibitions - From the Banks of the Thames to the Banks of the Neva (1997) and Unforgettable Russia. Russians and Russia through the eyes of the British (1998).[1] The latter contained over 300 works, mainly paintings, but also miniatures, drawings, engravings, objects of applied art and books. One tenth of these were exhibited and published for the first time in that show. New discoveries in the study of British art in Russia seemed unlikely. 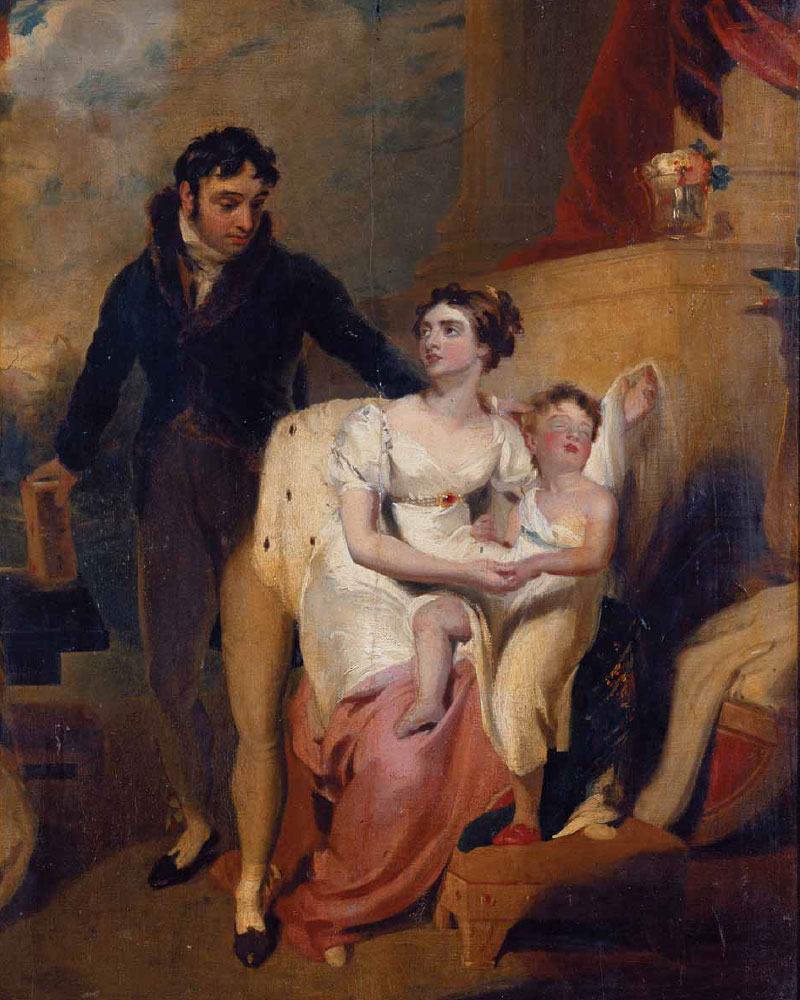 At the same time, however, some regional Russian collections still await scholarly research. This article recounts the exciting story of the discovery and attribution of a picture in one of Russia's provincial galleries, bought from a private collector in 1966 as a Family Portrait, possibly by Thomas Lawrence. The work, painted on panel, is 52 x 45 cm. in dimension. The painting has previously escaped the attention of scholars of English art, despite the fact that its author and sitters were great names in the history of British culture, and that the very existence of the work is in itself a rare discovery.[2]

At first sight both the artist's manner and the composition seemed to confirm the author of this article in the view that the work actually was by Lawrence , but it was unclear who the sitters were... Reproductions of a few of Lawrence's larger portraits, showing individually the sitters depicted in the Family portrait, have been found at the Witt Library, London, and the photographic archive of the Yale Center for British Art, where this research was conducted. The first of these, that of a male figure called Portrait of Charlemont Francis William Caulfeild (Caulfield - in some sources) 2nd Earl of Charlemont is now located in the National Gallery of Ireland, Dublin, and described in the collection's catalogue as a fragment of family group painted in 1812.[3] A canvas showing the Countess Charlemont and her son has come up at different sales in New York, most recently in 1962 and 1 966.[4] The names of the sitters in the Family Portrait can, therefore be firmly identified. The date when Lawrence began work on painting the portraits of the family can even be defined more precisely. In 1810 the artist mentioned his intense work on the original full- length portrait, writing;"I painted exactly ten hours and five minutes. on the whole lengths of Lord and Lady Charlemont and Child."5 In two years time a group portrait of Charlemont family by Lawrence was successfully exhibited at the Royal Academy in London.[6]

In his monograph on Thomas Lawrence, Kenneth Garlick wrote that the original group Portrait of Charlemont Francis William Caulfeild 2nd Earl of Charlemont, his wife Ann and their eldest son James showing the Earl leaning over the back of a sofa on which his wife and child were seated was cut down circa 1894, and now only survives in the two fragments mentioned above. The dimensions of the painting are not recorded, but the format of the surviving fragments make it clear that it was not less than life- size.[7] Garlick makes no reference to the existence of a small version of the work, painted on a panel, however he did include a number of portraits on panels as being by Lawrence in his catalogue of the artist's work.[8] Paintings by Lawrence in the State Hermitage, St. Petersburg, and the Pushkin Museum of Fine Arts, Moscow, are few and all oil or mixed technique on canvas, and so comparison with a picture painted on a panel is difficult. The resolution of the authenticity of the panel will require further technical examination of the panel paintings by Lawrence now scattered throughout different collections in Britain and Northern America, but the high quality and mastery of handling of the painting allows us to suggest that the small version of the portrait of the Charlemont family was executed by the artist himself.

Let us turn now to the characters of the sitters, as the romantic aura of their lives makes a charming addition to the story of the rediscovered image. William, second Earl of Charlemont (1775-1863) succeeded his father, James Caulfeild, first Earl of Charlemont, in 1799. It is a common place statement in biographical literature to say that no two men could have been more unlike than this father and son. The father, dubbed by contemporaries "a Genuine Wig" and "Great Earl" by his contemporaries, has usually been described as a true Irish patriot, who took a leading and honourable part in the nation's history. He played a decisive role in the formation of the Volunteer Corps, which evolved into the national militia. In 1782 Great Earl gave support to the political process leading to the production of the Bill of Rights, which gave greater freedom to Irish Catholics. He was also a noted connoisseur, collector and patron of art, friend of artists such as William Hogarth, Joshua Reynolds, William Chambers and Pompeo Batoni. He was Chairman of the Committee of the Dilettanti Club and made a significant contribution to the foundation of the Royal Irish Academy. Charlemont's Dublin house was a well known cultural center for the enlightened liberal society of the time.

The first son, Francis William, was elected a representative Irish Peer in 1806, and created a Baron in 1837, but was a far less prominent figure than his famous parent. He married Ann, daughter of William Bermingham of Ross Hill in 1802. Lady Charlmont was one of the most famous beauties of her age, Byron was one of her devoted admirers and wrote about her in the first edition of "Don Juan". The lines were later removed from the poem, probably on the wishes of Lord Charlemont, who may not have wanted his wife's name associated with the poem that had been publicly condemned. Byron wrote:

'There was on Irish lady, to whose bust
I ne'er sow justice done, and yet she was
A frequent model; and if e'er she must
Yield to stern Time and Nature's wrinkling laws,
They will destroy a face which mortal thought
Ne'er compassed, nor less mortal chisel wrought."[9]

A few years later, Byron told a close friend; "Look in her face and you forget all everything else... Ah, that face! - to be beloved by that woman, I would build and burn another Troy".[10]

In the portrait, Lady Charlemont and her husband are depicted with their eldest son James, Viscount Caulfeild, born in 1803, who grew as "a young man of much promise" but died at the age of twenty in 1823. Unfortunately this was not the last blow to the family. In 1827 the Charlemonts lost one of their daughters after a long illness. Two years later the other daughter - Emily Caulfeild - died. In 1837 Lady Charlemont's husband was buried, and three years later her sister, Lady Leitrim, died. "Aunt Charlemont" became very attached to the children of Lady Leitrim. Until 1854 she was a lady of the bed-chamber to the Queen and died aged 95 in her residence at 14 Upper Grosvenor Street on 23rd December 1876.[11]

Sadly it is difficult to trace the whole provenance of the rediscovered picture at the moment. It may have been a first version of the finished canvas, taken from life in 1810 before work on the actual full- length portrait began, or more likely that it was produced in 1820s for a family member in memory of the deceased James Caulfeild. This latter date seems also possible if one remembers that at this time Lawrence often used wood for small portraits, but where and for how long the picture was kept, and how it appeared so far from Dublin and London we can only speculate. This publication may help to clarify the itinerary of the mysterious journey that this wonderful portrait made to provincial Russian collection.

In conclusion, the author would like to acknowledge the support that the Paul Mellon Centre for Studies in British Art in London, and the Yale Center for British Art in New Haven have afforded her during the research into material relating to British art in Russian collections, and to Mrs. Maya Mitkevich and Elena Ruzch- nikova of Archangel Art Museum, who kindly supplied the required information about the portrait. 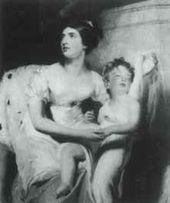 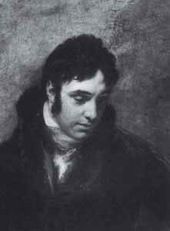 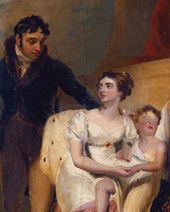 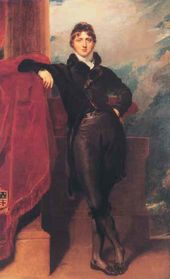 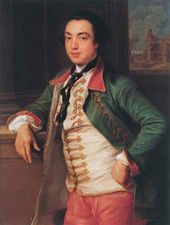