Celebration of the 1000th Anniversary of Kazan

Today, the name of Nikolai (Nicolai) Fechin is still little known to the Russian public - yet this talented and appealing artist was equally gifted in painting, draughtsmanship, wood carving, sculpture and the teaching of art. His work reflects a number of contemporary trends, although art nouveau, with its love of beauty, romantic quest for national roots and lack of a rigid stylistic models was to prove the most appropriate form for this master.

Born in 1881 in Kazan, capital of Tatarstan, Fechin trained as an artist at the St. Petersburg Academy of Arts. Returning to Kazan after his studies, he took part in numerous European and American exhibitions. The majority of works from this time were either sold at these events, or sent abroad to foreign collectors. With the beginning of World War I, such international connections were severed: paintings created during and immediately after the war remained in Russia. In 1923, the artist was forced to emigrate: Fechin left for America, taking some of his canvases with him. For this reason, the years prior to 1910 and the period between 1914 and 1923 are the stages in Fechin's career best represented in Russian museums. 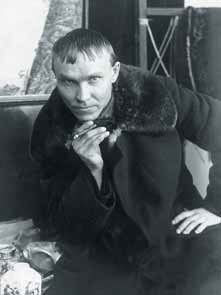 Nowhere is Fechin's art as extensively exhibited or as carefully studied as in Kazan. His legacy remains the pride of the State Museum of Fine Art of the Tatarstan Republic. No other Russian museum can boast such a number of his works; built up gradually over the years, this collection now numbers 189 drawings, paintings, sculptures and applied art pieces by Fechin.

The collection was begun in 1919. In 1923, Fechin left the museum several sketches and three large works: "Village Fete (The Showering)” (1911), "The Slaughter-House” (1919) and the "Portrait of the Artist's Father” (1918). Due to the efforts of museum workers, the collection increased significantly in the 1960s and 1970s. In 1976 Eya Fechina-Brenham donated a group of canvases, sculptures and magnificent charcoal drawings created in the USA. This meant that quite a number of Fechin's masterpieces now graced the walls of the Kazan museum, whose Fechin memorial room became well-known in artistic circles.

The "Russia's Golden Map” exhibition at the Tretyakov Gallery includes brilliant works by Nikolai Fechin. Among these are the superb unfinished portrait of Nadezhda Sapozhnikova from 1916, showing the model seated at the piano, and the 1915 portrait sketch. Sapozhnikova played a vital role in Fechin's career: in Kazan, she was at once his friend, pupil and patron. Her magnificent studio was a regular meeting place for tutors and students of the Kazan School of Art. Here, they were able to paint and discuss art in an informal atmosphere. Many of Fechin's portraits, including those of Sapozhnikova, were produced here.

For Fechin, beauty lay in individuality. The artist never attempted to correct or improve that which was created by nature. His portraits of Sapozhnikova force the viewer to consider the arbitrary nature of our ideas on beauty. He likes to totter on the brink. For him, there is no set model: discordant, incongruous images can also be beautiful.

The unfinished nature of the 1916 portrait lends it an added charm. Fechin left many unfinished works: whether deliberately or by chance, it is difficult to tell. Without a doubt, such paintings serve to accentuate the creative process, showing it to be no less important than the end result. Fechin allows us to follow the birth of his compositions, living organisms in which all elements are equally important. The vigorous charcoal etching and temperamental brushstrokes create dynamic images. Adhering to a vital principle of art nouveau, Fechin always strove to capture the organic life of what he saw rather than the mere form. His broad, sweeping strokes are in fact the product of a concrete inner vision.

One of the artist's most meaningful portraits is that of his father created in 1918. Ivan Fechin is shown seated on the arm of a massive armchair, his coarse sheepskin coat contrasting oddly with his surroundings. Just as tailcoats and regalia served in classical portraits to denote social status, the sheepskin helps create a powerful and convincing image of a Russian artisan. Nikolai Fechin always showed tremendous respect for his father. Thickset and strong, this man devoted his entire life to his work, which in turn brought him wisdom, stability and the power to accept life with all its privations.

One of Fechin's undisputed masterpieces is his portrait of Varya Adoratskaya. Created in 1914, at its very first exhibitions "Varenka” drew comparisons with Serov's famous "Girl with Peaches”. The two canvases do have much in common - similar subjects, similar technique, and, above all, the same mood of peace, tranquillity and happiness. 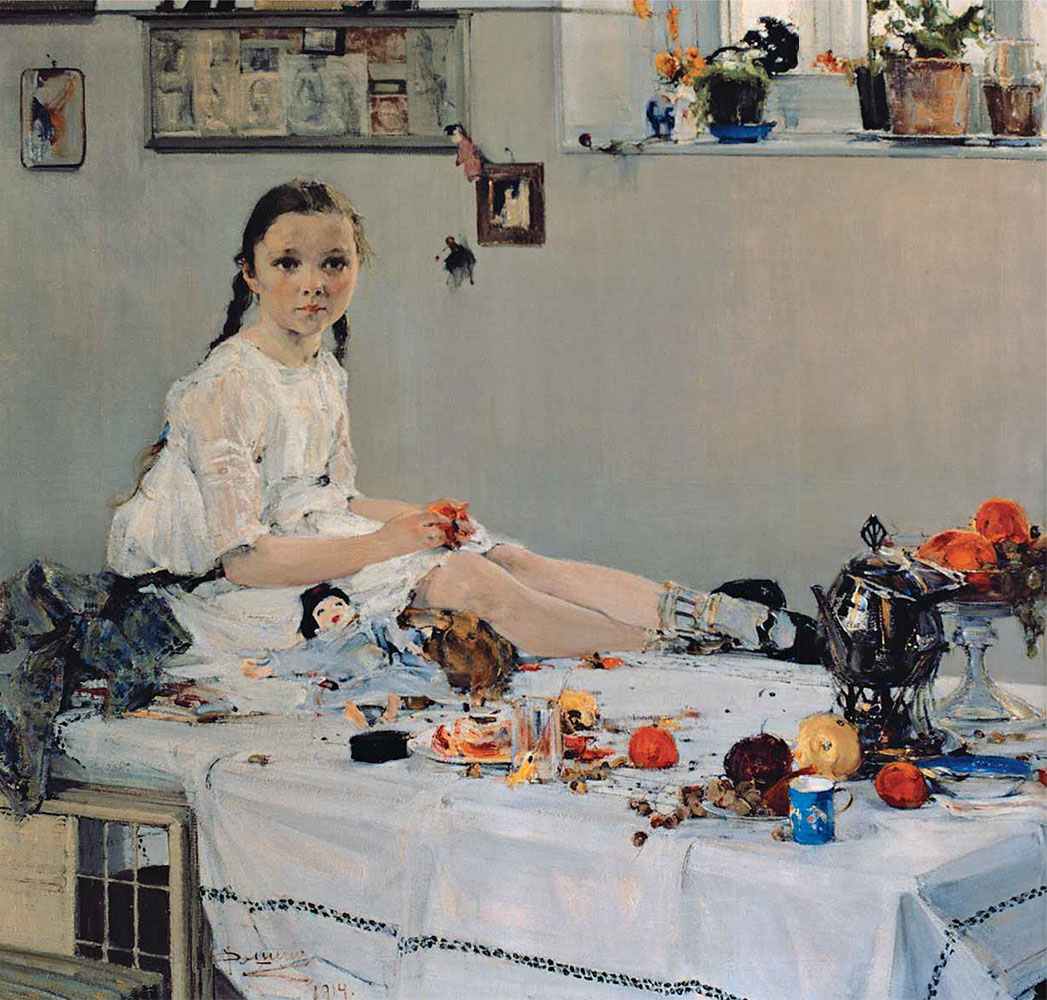 In 1917, Fechin produced a string of very different female portraits: exotic and precious, they glitter like jewels. These are the portrait of Tamara Popova, Fechin's pupil at the Kazan School of Art; "M-lle Girmonde. Manicure Lady” (Taos, USA); "Lady with Cigarette” (private collection, USA); "Masha Bystrova” (the Grigoriev Museum of Art and History, Kozmodemyansk); "A Young Woman” (private collection, USA) and another "Lady with Cigarette” - a portrait of Litvin (location unknown).

Thick, fragmented strokes fill the canvas like a mosaic. Far from being lost or dissolved, form gathers volume and depth. The women in these paintings are like colourful tropical birds. This culture, this whole way of life was shortly to be destroyed, but here, refinement and aestheticism are taken to extremes. Fechin's sparkling, multifaceted shades put one in mind of precious stones. Using a minimal number of colours, he creates a multitude of complex tones of grey.

The portrait of Marusya Burlyuk, created in October 1923, came into being as a result of Fechin's chance meeting with the artist David Burlyuk in the New York subway. Despite their different styles, both painters had previously attended the Kazan School of Art, Burlyuk enrolling three years after Fechin. Now in New York, they lived near each other and, as it turned out, their children went to the same school. Fechin suggested that Burlyuk pose for him. The finished portrait, a real masterpiece, is now in the Santa Fe Museum of Fine Art, New Mexico. Fechin also produced two portraits of Burlyuk's wife Maria, known affectionately as Marusya. One of these, the gift of Eya Fechina-Brenham, is now in the Tatarstan Museum of Fine Art.

Most of Fechin's life was spent away from capital cities. In Russia, he lived mostly in Kazan; in the USA, his home was Taos, a small town in the hills of New Mexico. In 1955, he died in Santa Monica, California. This may partly explain why Fechin is so poorly represented in major museums. St. Petersburg's Russian Museum possesses very few of his paintings, although those it owns are excellent. The Tretyakov Gallery can only boast two paintings and several drawings. In America, most of Fechin's works are to be found in the museums and private collections of New Mexico, Oklahoma, Texas, Arizona, California, Indiana and Minnesota.

Fechin can truly be called a Russian-American painter. His contribution to the Taos art colony, and indeed, the whole of American South-Western art, is considerable. At the same time, he remained true to his Russian roots.

For Fechin, the humanistic values of classical art and the plastic innovations of the 20th century are equally important. Combining a precise portrayal of nature with artistic mastery and plastic methods, he puts one in mind of Filipp Malyavin, Abram Arkhipov and Sergei Malyutin. In Western art this approach is represented by Anders Zorn, George Hendrik Breitner and John Singer Sargent.

At the heart of his work is mankind with all its different "faces”: the children of nature, the product of culture. Fechin communicates to us the pure joy of art, the exultation in spreading paint on canvas or tracing forms on paper. Through his work, we are reminded of the joy and beauty of living.

Nikolai Fechin in his studio of the Kazan Art School. 1910s 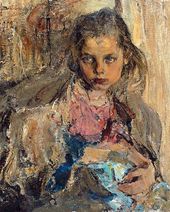 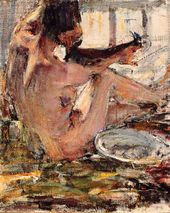 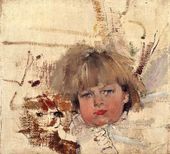 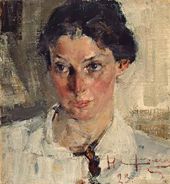 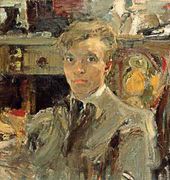 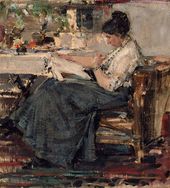