“Accomplices”. The first exhibition of “actual” art from the Tretyakov Gallery collection

The exhibition "Accomplices. Collective and Inter-active works of Russian Art from the 1960s-2000’’ was planned and realized by the Tretyakov Gallery's department of new art trends at the gallery's building on Krymsky Val, and constituted a special project of the First Moscow Biennale of Contemporary Art. The major event of the Biennale's "Dialectics of Hope" took place in the former Lenin Museum and represented a rather small international group of young artists (only six of them from Russia), whose creative efforts were considered by the six curators as indicative of their times, and signifying a new stage in the development of "actual" art. But the impact of the Moscow Biennale would have been almost negligible, were it not for some "special" events staged at several locations in the city, such as the Central House of Artists, the Moscow House of Photography, both the Museums of Contemporary Art (Tsereteli's on Petrovka Street, and the newer one on Yermolaevsky Pereulok), the State Centre of Contem-porary Art on Zoologicheskaya Street, and many other state, corporate and private institutions. 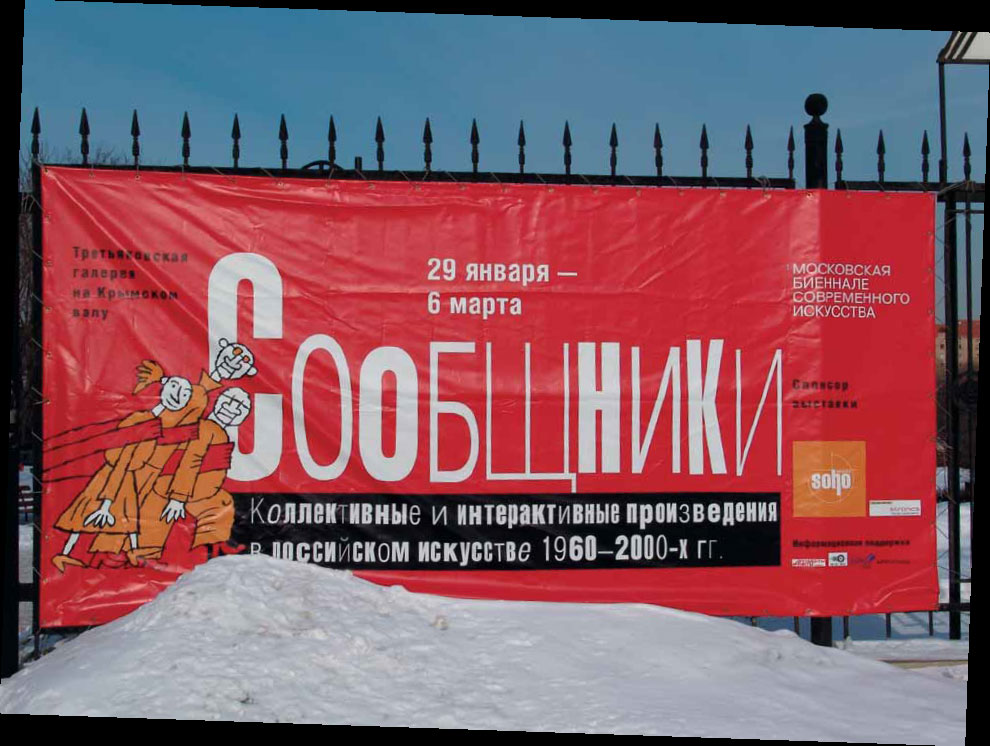 Though participating on their own initiative - and with their own resources - their contribution to the Biennale cannot be overestimated, and made it a really large-scale and multi-faceted panoramic event.

There was nothing unexpected in the display of avant-garde art at the Tretyakov Gallery: "Accomplices" is not a mere radical display from curator-extremists, "squeezed" into the treasury of national heritage. It is another proof of a continuing new course, of a new official cultural policy in the Gallery's collecting and educational activity. It began in 2001, when the department of new art trends was organized, with its initial collection containing about 2,000 works. Assembled over 12 years by a group of art critics, experts and curators in a subsidiary of the Tsaritsino museum-reserve - and housed in a former bomb-shelter in the suburbs of Moscow - this collection covers a 40-year period in the development of nonconformist art, represented by the works of 160 artists, and is the largest of its kind in Russia. According to a mutual agreement between the two museums and a decision of the Russian Ministry of Culture, it was merged with the collection of the Tretyakov Gallery, and is being widened with works of "actual" art. 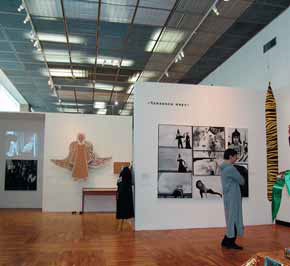 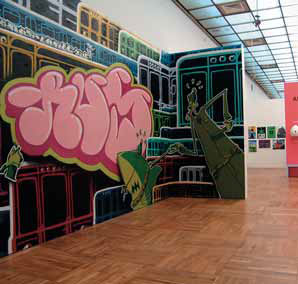 One of its peculiarities comes from the curators' specific attention to non-lasting, fragile, experimental, and newly-created works which had not yet found their realization in any plastic form. Such artefacts are usually studio-made, created for the artist's personal use within the framework of a discussion of a particular idea; as a result, they are of real importance for the comprehension of the process of creativity, but have no means of self-defence against the aggression of context and time. The curators reached a decision to postpone the acquisition of works of art that found their realization in a plastic form, because - unlike such ephemeral and conceptualistic ones - they survive without museum assistance; we managed to collect - and thus save - a considerable number of artworks that are becoming "cult" today.

Such works of art were usually created within a group of artists rather than individually; this can be easily explained by the fact that before an artist finds his or her own "path" there is a need for some joint group discussion of future artistic and creative results. That is how the idea of the exhibition "Accomplices" originated: it was devoted to the artistic groups of Moscow, Leningrad and Odessa of the 1960s-2000.

The majority of Russian non-conformist artists existed within certain minicolonies - each with its own discourse; their interactions, contradictions and oppositions had a strong and direct impact on the development of Russian contemporary art as a whole. It should be noted that no such number of artistic groups as existed in the Soviet Union were to be found in any other national school of art. This "brotherhood" of artists enabled them to survive, to find support and assistance, to master artistic skills, to be criticized and to feel affiliated with the world art context. Naturally, all these factors influenced the generic preferences, aesthetics and poetics of the new Russian avant-garde.

To join any artistic group involved entering into a certain artistic value system, and consequently, to supplement the individual's creative impulse with strategic practices of interaction with the traditional, as well as with the work of predecessors and artist-partners. The continuous process of such "polylogue" communication results in the formation of a system of unconditional notions and connotations, and thus acquires some obvious tendency. Each group is, practically speaking, equal to a trend and/or movement of art at its first "ideological" phase in formation, prior to the development of any "adequate-to-idea" active plastic forms. The group is focused on the creation of works provoking active interaction.

This is a special class of manipulative artworks meant for "internal consumption", created by members of a group in order to stimulate discussion, to formalize interaction, to illustrate and fix the formulae sought, and to participate in certain inner rituals. Esoteric and "non-normative", such works are not meant for the general public, or for large audiences - they are fragile and small, or the opposite, too large-sized and technologically paradoxical. Created for just a few hours, they are recorded only by photographs or in artistic legend. They are like a fuel to maintain the inner spiritual life of the group. Such are the stylistics and typology of the materials displayed in chronological order at "Accomplices" - from the group "Dvizheniye" (Movement), formed by Lev Nusberg in 1964, to the duets "Francisco Infante and Natalia Gorunova" and "Vitaly Komar and Alexander Melamid", to "Leviathan" headed by Mikhail Grobman, via the group "Gnezdo" (Nestle), "C- 3", "Mukhomor", "Srednerusskaya Vozvyshennost" (Middle-Russian Hills), and Leningrad's "Novye Khudozhniki" (New Artists), to today's newly-formed groups - "Siniye Nosy" (Blue Noses), "PG", "ABC", "Obledeneniye Arkhitectorov" (Ice-Covered Architects). The "Accomplices" exhibition showed more than 250 works originating from 60 groups, making it the first project in the museum's practice where the viewer was encouraged to touch and interact with the artworks exhibited.

The exhibition was awarded a Medal of the Russian Academy of Arts, an Order from the "Novoye Pravitelstvo" (New Government) of Artists headed by Georgy Ostretsov, and was invited to the Museum of Contemporary Art in Strasburg as an example of a model display of contemporary Russian avant-garde art. 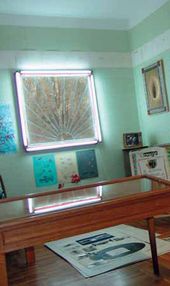 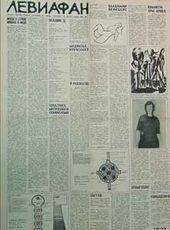 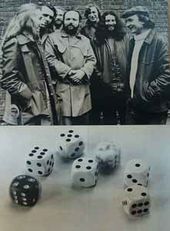 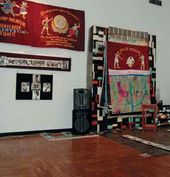 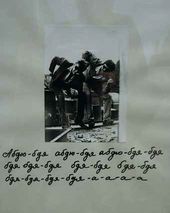 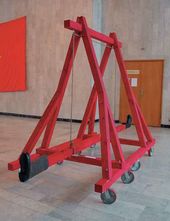 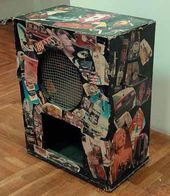 Alexander KHARCHENKO. Having it Out with the Use of Arms. 1992.
Reconstruction of the installation. Participants – Vladimir Dubosarsky, Dmitry and Inna Topolsky, Alexander Sigutin, Avdei Ter-Oganyan, Valery Koshlyakov, Viktor Kasyanov and others 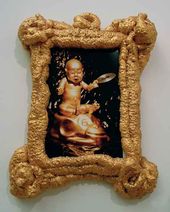 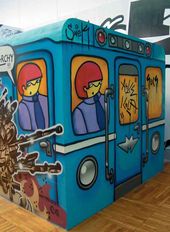