No Winner, Or Loser in the Cold War

FROM THE FALL OF THE BERLIN WALL IN 1990, AND THE ERA OF PERESTROIKA, THERE IS AN ENORMOUS APPETITE IN GERMANY TO UNDERSTAND THE CULTURAL HERITAGE OF THE SOVIET UNION.

A new exhibition, "Berlin-Moscow, 1950-2000", has opened in Berlin's Martin-Gropius Bau. Despite the patronage of Vladimir Putin, President of the Russian Federation, and Johannes Rau, President of Germany, overall, it is a disappointment: the Russian and German curators could not agree on a central theme. The Berlin exhibition focuses on fine arts in an international context, while the Russian delegation, led by the Vice-Minister of Culture, Pavel Khoroschilov, wished to include other aspects of Russian culture; consequently, there will be a separate exhibition in Moscow in the future. In choosing to keep the name of the 1995 Berlin exhibition, the Russian curators, particularly Ekaterina Degot and Viktor Miziano, had assumed the 2000 exhibition would continue in the tradition of understanding the relationship between German and Russian art, and that it would be expanded to include architecture, design and film. The German curators, Jurgen Harten, Angela Schneider and Christopher Tannert, wanted to restrict the exhibition to fine arts, and their international development in the second half of the 20th century. Finally, a compromise was reached: there would be no division into East and West, and a strict chronological approach was avoided so as not to label "winners" and "losers" in the political context of recent European development. Instead, the development of the fine arts would be seen through the eyes of contemporaries at critical times, such as 1955, 1961,1981 and 1989. The essays in the catalogue reflect these social perspectives.

The Martin-Gropius Bau is amenable, with some space limitations, to the thematic development of the exhibition. There are six major themes or sections; they will be examined in the order they are presented in the exhibition The courtyard is entitled Prologue- the Call of Art. It is dominated by one of the biggest works in the exhibition; Gerhard Merz' The Victory of the Sun (2003), a huge white ashlar space flooded with light from thousands of electric lamps: there is no life without the sun; the transformation of the light of the sun has become art; the object could be interpreted as a giant battery illuminating the structure. In this section there are well known paintings of Gerhard Richter, obscure prints of Andy Warhol and a photographic advertisement variation of Clausewitz's famous maxim "Art is the continuation of politics by other means" (1991) by Svetlana and Igor Kopystyansky. In contrast, Vasily Yakovlev's painting Discussion about Art (1946) presents a Soviet work meant to stimulate thought in both the humanist and intellectual traditions. The painting has only a small statue and vague wall reliefs or feint wallpapers; as such there is no "art" in the picture; the implication is that art arises from an unseen easel; and that is what the discussion is about. Unfortunately, the current catalogue suggests that the discussion happens about the "Beutekunst", works of art which were brought to the Soviet Union during and after the war.

The second section is dominated by the theme, War and Glory. The first painting is a famous Soviet painting by Fedor Bogorodsky, The Glory of Fallen Heroes (1945); in the context of that era it was serious, but by today's standard the comparison between the Christian theme of pietu and a general on his knees seems exaggerated. The opposite impression is created by Barnett Newman's Who Is Afraid of Red, Yellow and Blue? (1969) where there are no human figures. Finally, the New York artists Komar and Melamid (who incidentally are also showing their work in the Frankfurt exhibition) present a modern portrait of Stalin entitled, The Origin of Socialist Realism (1983).

The group Art and Language, painted a portrait of Lenin in the style of Pollock and Andreas Gursky replaced a picture of Pollock by a photograph: clearly Lenin and Pollock are off their plinth. Works by Georg Baselitz, Anselm Kiefer and Alexander Arefyev pursue the same topic.

The next area is described as Pictures from the Divided Germany. It brings together East and West German pictures with foreign pictures. However, from the perspective of the German visitor, the overall impression is erratic, almost without meaning. Only the pictures of Mikhail Chernyshev are useful, giving a Russian interpretation of the meaning of the western pictures.

Following the German section, there is an area entitled Pictures from Soviet Russia; it covers the period from 1935 to the present. Artists include Erik Bulatov, Viktor Popkov, Mikhail Schwarzman, Sergei Shablavin, Pavel Korin, Vladimir Kupriyanov and Valery Koshliakov. Again, as throughout the exhibition, the subject theme includes works by international artists: Jeff Wall's huge photowork Dead Troops Talk (1991-92) depicts a dramatic and terrible scene from the war in Afghanistan; although the details are neither accurate nor plausible, the overall effect is impressive. Unfortunately, the works of Georg Baselitz and Gunther Uecker seem out of place, even though they describe war and memento mori.

The juxtaposition of Soviet and German pictures with war motifs can only be justified if the more abstract or informal styles of the western works are seen against the emotion and irony of the more realistic Russian images, for example, Kukryniksys' The End (1947), Tair Salakhov's On the Caspian Shore (1966), and Dmitri Zhilinsky's The USSR Gym Team (1965). Otherwise, this section is a failure. Those pictures describing the German involvement in war have little to say to the German visitor while a Russian will find the all too familiar Soviet pictures generally boring. One wonders whether the price of a non-integrated two-part exhibition has been too high.

The third section is called, Design and Action - The Extended Playground. It is dominated by two themes, which were of great interest in the 1950s and 1960s: "Dvizhenie" ("Movement") and "Zero". The Russian contribution is the only successful part of this section. Lev Nusberg's Beginning of Counting (1961) and Intrusive Like An Obsessive Idea (post 1960) draws on the early Russian avant-garde movement. Francesco Infante-Arana leaves social concerns to explore outer space in his About Reconstruction of Stars Sky (1965-66). The combination of Nusberg's works and Bulatov's Diagonale (1965) and Boris Turetsky's Motifs of Space (1962), clearly influenced by the classical work of Malevich, together with the works of the ZERO artists Heinz Mack and Otto Piene from the 1950s, all draw upon the influence of the Russian avant-garde. In contrast the works by Joseph Beuys, Reiner Rutherbeck, Katharina Sieverding and Jorg Immendorff make use of other materials, of other concepts of space and time, but they are in isolation, having no counterpart in the Russian works; in effect, there is a lack of balance.

The "Communications Systems” Department is dominated by Russian artists. The highlights are the white paper works of Svetlana Kopystyansky, the interactive installation of Ilya Kabakov, the superb photographs of Boris Mikhailov and, lastly, the grotesque comic-based sketches of Yury Leiderman. The absence of German contributions gives the false impression: there is no art of communication in the West. Why not remember Art & Language or Lothar Baumgarten's and Ferdinand Kriwet's works.

The fourth section, Time of Change - Time of Upheaval has two parts: the confrontation between East and West German artists; followed by the mostly Russian view of society using parody and irony.

The conflict between East and West Germany is illustrated by the works of Olaf Metzel 13.4.1981 (1985) and Ralf Kerbach's Twins (1984); they are early examples of the cultural exchanges that began between the two Germanies in the mid-1980s. Hans Peter Feldmann's stark archival work, The Dead, 1967-1993 depicts the victims of West European terrorism. Similarly, the interactive presentation of Irina Nakhova's Showers permits the viewer to listen to the taped speeches of various dictators, with the ability to interrupt them at any time. Clearly the meaning of art was changing at this critical time. It has a macabre fascination; although the content is meager and minimal, one wants either to look away, or to probe more deeply. The contribution of Levandovsky, Berlin Room (2002) is in a similar vein, but it is already retrospective. From the eastern perspective the works of Martin Kippenberger, Pleasant Communist Woman (1983), Working People Shortly Before Lunchbreak (1984), subtitled, Stalin is Not Here exploit the cliches of the press and government authorities, not to rail against their inhumanity in the western tradition, but to confirm that people in the East had already formed their opinions. This is made explicit by Guia Rigava's video-installation This World Is Leaving (1995).

The next group is also preoccupied with the past, but in a different way. Mostly Russian artists, they take the old familiar icons of the Soviet regime, and through exaggeration, irony and parody, transform them. Boris Orlov takes objects from the medal industry and transforms them through bold and exaggerated colours. Vladyslav Mamyschev-Monroe uses photographs reminiscent of old family albums. Oleg Kulik, undoubtedly the most radical iconoclast in contemporary Russia, is photographed as a pathetic standard-bearer, naked in the snow and surrounded by dogs, satirically suggesting beastliness. Similarly, the Slovenian group, IRWIN's , depiction of Malevich's dead body as a form of decoration raises various questions. Finally, the outstanding contribution of Rebecca Horn's The Tortoise SighTree (1994), which had been displayed in the New National Gallery of Berlin, has been added to this section of the exhibition. Like Irina Nakhova's Showers, it shows that despite dictatorships those who have suffered silently can finally begin to speak out.

The last two sections Constructs and Phantasmagoria of Today and Return of Utopia are similar; they seem to be a collection of disparate works that do not fit into the other sections.

Wolfgang Tillmann's c-print series of Ice, Snow and Garbage (1999) contrasts with Olga Chernysheva's photo group Expecting a Wonder (2000): the dynamic and the static, extremely fast and very slow processes. The section of new paintings is dominated by Neo Rauch, who combines into complex assemblages the realism of everyday life within an historical perspective. A Russian section begins with Sergei Bratkov's famous portraits of OMON members, followed by Dmitri Gutov's burnt Barrier (1998) and concludes with the clever ornament-applications and prints of AES depicting the conquest of outer space by Islam.

The final section concludes with the architectural models of Yury Avvakumov, which are based on the early Russian avant-garde, and are purposely impractical. The photograph of Andreas Gursky, although it was computer generated, and the wax-figures of Oleg Kulik from his installation Museum (2003) are not utopic, but rather hyperrealistic or naturalistic. Nature is so much the source of energy and strength in human beings that it should be preserved in a museum. In contrast with the iconoclasm of Kulik's performances, videos and digital prints which repudiate the norms of society, Nature becomes a museum exhibit.

In conclusion, although the apparent goal of the exhibition, "Berlin-Moscow, 1950-2000" is not to confront nor to compare the differences between German and Russian art, so that neither side can feel that their aesthetic and artistic doctrines and vision are superior, but rather to allow each side an opportunity to examine the other; still, no matter how hard the curators have worked to agree on themes, names and artistic works, one is left with the impression that the exhibition suffers from too much compromise, fuzzy concepts and poorly assembled themes. One can only hope that the proposed Moscow exhibition will be better. 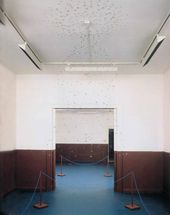 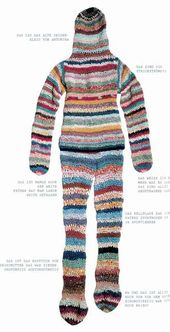 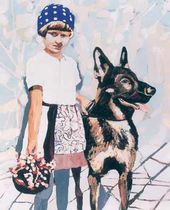 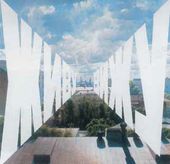 Vadim ZAKHAROV. The History of Russian Art – from the Russian Avant-garde to the Moscow School of Conceptualism. 2003
Installation. 360 by 605 by 390 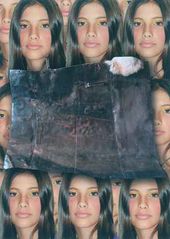 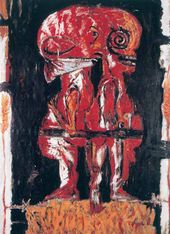 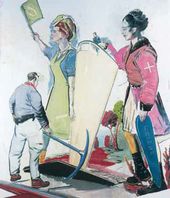 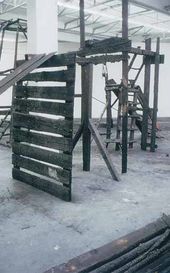