MOSCOW, LIKE ANY OF THE WORLD’S GREAT CAPITALS, IS CONSTANTLY CHANGING ITS APPEARANCE. THE UNIQUE CHARM OF EACH AREA CHANGES AND, THE MORE TIME PASSES, THE MORE WE APPRECIATE THE EFFORTS OF PAST MASTERS TO RECORD THE MOSCOW THAT THEY SAW. GURI ZAKHAROV WAS SUCH MASTER, AND THE ARTIST LIVED A LARGE PART OF HIS LIFE IN THE CITY THAT HE SO GRACEFULLY DEPICTED. BORN IN THE SMALL AND ANCIENT RUSSIAN TOWN OF KIMRY, HE TOOK MOSCOW CLOSE TO HIS HEART, TRYING TO PORTRAY EVERY DETAIL OF THE CITY’S ENVIRONMENT, AS IF IN A HURRY TO CATCH THE ATMOSPHERE THAT PREVAILED IN THE CITY IN THE 1960s.

Though he spent most of his younger years far away from Moscow, the general impression which comes from his works is that they were created by a true Muscovite. Since it is impossible to squeeze an entire city into one piece of paper, Zakharov concentrated his artistic attention on a small district in the centre of Moscow, around the Taganskaya square.

In his etching "Marksistskaya Street” I see the street of my own childhood. How could the artist know that in some dozen years or so the street would no longer be there? And that he will be the only one to have depicted it - with its narrow pavements, its alleys of old lime trees, and crooked stone roads, drizzled with snow? One can see a dim figure of a woman walking away in the twilight. The figure turns out to be that of the artist's wife, Tatiana Sokolova, a sculptor It seems, however, that the figure is motionless and it is the trees that are moving. The trees appear to be parting, and thus opening the way to a lonely star that can be vaguely seen in the darkened sky. The shadows of the trees are sliding in the faint light of the street lamps, barely reaching the logs of an old wooden house. There is not a single spark of light in any of the windows. Everyone is asleep, or perhaps the house is abandoned already.

Zakharov's etching "Kommunisticheskaya Street" is a mere reflection of that previous one: the same night view of the street with its century-old poplars. The street is still alive, unlike many others in Zakharov's etchings, yet it has changed so radically that it is now almost unrecognizable. Yet another street of my childhood.

Guri Zakharov lived and worked during the period in which the art of the engraving was reborn. Such artists as O. Pochtenny and A. Ushin from Leningrad, and I. Golitsyn in Moscow were very active in this kind of artistic technique. Zakharov's cityscapes were marked by a strict composition that resulted from his keen attention to the object which he was depicting. He had a unique artistic intuition which opened new horizons for his creativity. He managed to go "behind the scenes" of the simple (and real) houses, streets, yards, dead-end streets and other locations. As a true master, he was able to save the feeling of the past, as well as express his own life experience. It would be unfair to compare Zakharov's engravings to chronicles of the ever ancient and modern Moscow: they are not such narratives.

One might compare them to poetry, and more specifically to blank verse. Not chained by rhyme, yet marked with certain inner rhythms with the greatest concentration of emotional colouring: from the grotesque to the lyrical. Zakharov combines irony with sorrow, dreamy motifs with reason. The associative element in his engravings echoes such poetic lines.

A master of the art of the engraving, Vladimir Favorsky once said that he had the same set of feelings that everyone else did - but the thing was that he simply stared into space, while others did not. This remark can also be referred to Guri Zakharov, who had experienced the great impact of Favorsky's work on his creativity.

Some of Zakharov's engravings (linocuts), like an early work called "Prospekt Mira”, reflect Moscow's true monumentality. The artist's unique skill to demonstrate great depth through flat silhouettes is especially evident in this work. The lonely hills, growing constantly more and more distant, become the basis for the compositional structure of the piece. The arcs of a remote viaduct blind with their whiteness, and seem to be literally rising up in the air.

The artist loved wandering around Moscow at the crack of dawn to contemplate the silent grandeur of the buildings. Solyanka Street, an old street in the centre of Moscow, is not suited for daytime walks because of its crazy traffic: however during the early hours of dawn its truly charming beauty is presented to the greatest extent, revealing unexpected details: a wide open window or something else... Zakharov had the ability to find poetic beauty in everyday life. Thus any architectural element could play the role of a poetic metaphor, and such is the Solyanka work. The artist could be seen on the street at any time of the day, morning or night. In his etchings Zakharov managed to pass on his fresh and vivid perceptions of time and place so specific to their location: the picturesque "togetherness" of the fences, stone and wooden houses, gates, doors, windows - all so characteristic of this part of Moscow in the 1960s.

The bell tower of the 18th century church at the end of Solyanka where the Astakhov bridge crosses the Yauza river has always been an attraction for many artists: Zakharov was no exception. His engraving, "Yauzskiye Gate", provides an unusual background for a portrait of the artist's wife: the magnificent edifice rivals the female passer-by in the glamour of the night. It is hard not to feel the humour of the situation: it seems as if the houses across the bridge serve as a pedestal for the church, while the podium for the woman is the entire street.

In Zakharov's engravings Moscow is portrayed as a city of steep river banks and hills. Even some squares, like Taganskaya, appear uneven. The best example of this tendency is his linocut "Yauza" (a tributary of the Moskva River). A small pedestrian bridge resembles a tightly strung bow, while in the perspective one can see a high railway bridge with some few arcs; together, the bridges create a peculiar perspective. The viewer's eye inevitably catches the far-away silhouettes of the architectural monument of the 15th century, the monastery that lent its name to a square and two streets - Bolshaya and Malaya Andronievskaya. In Zakharov's linocut the rays of the sun brighten the horizon, the bridges and the embankment of the frozen river. All this indeed "sounds" like a hymn to the beauty of the city.

Guri Zakharov liked to take long walks after heavy snowfalls, when the whole city looked like an engraving - with everything defined in black and white. The artist never portrayed anything "just as it was", instead he constantly looked for a particular point of view, colouring the cityscapes with his artistic imagination. Poetry and art were happily married in his personality: he strived to create and imagine - omitting unnecessary details, but adding some of his own. Thus he engraved "portraits" of houses, streets or trees. His cityscapes resemble intricate interiors with numerous corners and arcs (ironically, Zakharov's profession was that of an interior designer).

Just as the legendary old Arbat area had its own poet - the famous songwriter Bulat Okudjava - the Taganskaya region had its own artist, Zakharov. In his quest for the beautiful, Zakharov did not have to go far - it was all there, just a short walk from his home.

A major city is recognized not by its wide panoramas, but often rather by its small, curving and narrow streets. Like arteries, the streets, side-streets and dead-ends are the blood vessels of the city's organism. Zakharov's Moscow is not meant for a hurried glimpse. His city is for those who do not absorb beauty in gulps: it is for those who, like true gourmets, take time to appreciate it. 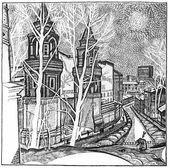 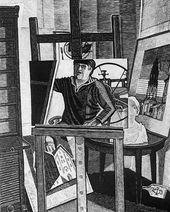 Self-portrait in the Artist’s Studio. Series 'Moscow Interiors and Portraits'. 1986
Linocut. 89 by 70 cm 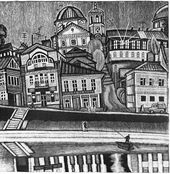 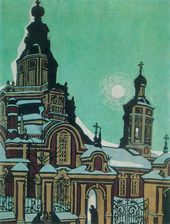 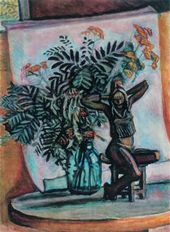