HE JOURNEY OF "A WOMAN WITH A ROSE"

HIS LIFE ENDED JUST A FEW DAYS BEFORE THE OPENING OF HIS FIRST EXHIBITION IN RUSSIA – AN EVENT OF WHICH HE HAD DREAMED FOR HIS ENTIRE LIFE. THE TRETYAKOV GALLERY WAS READY TO PRESENT TO THE PUBLIC A NUMBER OF HIS MASTERPIECES: THE BRIGHT AND "JUICY" STILL-LIFES, THE DIVINE LANDSCAPES OF ISRAEL, AND THE VIEW THAT HAD INSPIRED THE MASTER FOR MANY YEARS – THE RUSSIAN CHURCH IN GETHSEMANE. THE TRUE SYMBOLS OF JERUSALEM, THE CITY WHERE THE ARTIST SPENT MOST OF HIS LIFE – THE MOSQUE OF OMAR AND THE DAMASCUS GATES – FLOODED HIS CANVASES WITH WAVES OF BEAUTY AND TALENT. YET THE BRILLIANT ISRAELI ARTIST ALEXANDER KOPELOVICH ALWAYS CONSIDERED HIMSELF A RUSSIAN PAINTER.

Kopelovich did visit Moscow about a year before the opening of his exhibition. At the time the USSR had softened its hostile policies, giving its citizens an opportunity for some freedom to travel, and allowing immigrants to visit their homeland. When Kopelovich was in Moscow, he could hardly wait for dawn to go out and make sketches of the Kremlin and the beautiful cityscapes of the capital. In his unbelievably large apartment in Jerusalem, Kopelovich often entertained his friends and newly-arrived immigrants, and never lost an opportunity to inquire about the state of affairs in Russia. He remained a child - and, like a child, he cherished his hopes for a better world. With special pride, the artist showed his guests around his studio, with its breathtaking view from the third floor onto the Damascus Gates, the Old Town, the Lord's Tomb and the Wailing Wall - onto the city of Jerusalem, with its most famous monuments and multi-racial streams of people, which he depicted so skillfully. Neither terrorism, nor wars, nor even Kopelovich's friends could convince the painter to leave his comfortable, and comforting, studio. And it was there that he died, quite unexpectedly, in front of his easel and an unfinished painting.

His father, Mikhail Khavin, was a doctor who was awarded the position of an officer in the imperial army for his bravery, an achievement very unlikely for a Jew born in the "Pale of Settlement" at the time. He later died of cholera, trying to save the population of Turkestan, in Russian Central Asia, from the disease. Kopelovich's mother, whose exquisite beauty was so brilliantly depicted by the great artist Dobuzhinsky, came from the famous Russian Jewish family, the Libos. After the death of her husband, Polina Khav- ina re-married the art collector David Kopelovich, who adopted her child, Alexander. From that time, Kopelovich's extensive collection always travelled with his adopted son. Many truly remarkable works of art found their place in that collection: paintings by Serov, Kustodiev ("The Picnic"), sketches by Dobuzhinsky and Sudeikin, and even a huge masterpiece, Polenov's "Winter". Yet the real "pearl" of the collection was Levizky's "A Woman with a Rose", which is now one of the greatest embellishments of the Levizky hall of the Tretyakov Gallery. This painting, by one of the most outstanding artists of the era of Catherine the Great, was donated to the Russian Cultural Foundation by Mrs. Ray Kopelovich his widow.

The painting itself was a mystery for art lovers and critics for a long time. The exquisite depiction of a magnificently beautiful woman was not included in Diaghilev's encyclopaedic edition, "Russian Painting of the 18th Century. Volume I: D.G. Levizky 1735-1832", published in 1902 which later became the ultimate authority and reference book for all interested in Russian art of the "golden" 18th century.

The great impresario Diaghilev managed to make a list of 92 portraits that were for certain by Levizky, as well as 15 works whose location was unknown. In addition to this, Diaghilev also created a chronological table of all Levizky's works dated from 1769 to 1818, yet the mysterious "Woman" was not among them.

Nor was the painting in the catalogue of Dmitry Levizky's famous 1922 exhibition at the Tretyakov Gallery. However, the well-known Russian art critic Lyudmila Markina made a stunning discovery: while looking through old negatives of pictures from the exhibition, she saw the painting hanging on the wall of the Tretyakov Gallery. Nevertheless, it remained unclear why the painting was missing from the catalogue, which was composed by such a great expert as Igor Grabar. However Markina managed to find the key to this mysterious story: it turned out that both the exhibition and the catalogue were prepared in such a great hurry that some works were sent from different museums all over Russia only at the last minute. The handwritten text of the catalogue was sent to the State Literary Department only on December 29. When Markina checked the archives of the Gallery, she found a letter addressed to D.S. Kopelovich, dated December 30: it asked Kopelovich to lend the Tretyakov Gallery the "Portrait of a Woman" from Libo's collection for the time of the exhibition dedicated to the centenary of the death of Levitzky. The portrait was to be returned to the owner when the exhibition was over: thus the painting "escaped" the attention of the art experts. According to the art critic Savva Dudakov, who had been on friendly terms with Alexander Kopelovich, the step father of the artist, D.S. Kopelovich bought the painting in the 1920s; he was initially planning to buy Chagall's illustrations to Gogol's "Dead Souls", but changed his mind at the last minute and spent the money (100 chervonets) on the Levizky. Both Alexander Kopelovich and his stepfather always called the woman in the painting the "Smolyanka" - a student of the Smolny Institute for noble young ladies - and expert research by the Tretyakov Gallery proved that the date on the painting (1788) corresponded to the period when Levizky completed his series of portraits of young women attending the Smolny Institute. The authenticity of the signature, and the date remain beyond doubt to the Gallery's experts.

The final part of the portrait's long journey was directly and inevitably connected with the numerous events that took place at the turn of the century, and which had a drastic effect on the Kopelovich family. Alexander Kopelovich moved to Riga in 1925 with his parents, and it was there that he met the great Russian landscape- painter and academician Sergei Vinogradov, who would later become Kopelovich's mentor and teacher. Vinogradov, who had left Russia to present his exhibition in the United States but subsequently returned to Riga, had always been a true symbol of the genuine Russian artist to most art critics. Since Vinogradov had no children, Kopelovich found a "new father” in the great artist; Kopelovich would always speak of Vinogradov with great warmth and respect. In the booklet devoted to his long-awaited exhibition, Kopelovich explained that he had a special reason to love everything that was Russian: it was due to the fact that he - as a young boy of thirteen - had met Vinogradov, and since then had cherished his love for Russia and loved everything in any way related to the country. Vinogradov not only taught him the laws of drawing and colouring, but also introduced him to the treasures of Russian literature: Pushkin's "Eugene Onegin", Dostoyevsky's "The Brothers Karamazov", Bunin's "Mister from San-Francisco"... Vinogradov used to read aloud passages from great Russian books, such as Tolstoy's 'The Death of Ivan Ilyich" or "Kholstomer. A Story of a Horse". Among Vinogradov's friends were some really outstanding artists of his time, and having Vinogradov as his "spiritual father" and mentor not only served him well as a painter, but made him a personality. "His memoirs about his meetings with Tolstoy, Levitan, Vrubel, Serov and especially his closest friends, Fyodor Shalyapin and Konstantin Korovin, are unforgettable. I will always remember my respected teacher and "spiritual" father Sergei Arsenievich Vinogradov", wrote Kopelovich.

Besides Vinogradov, Kopelovich's talent was noted by Dobuzhinsky, and then this extremely gifted young man came to Paris from Riga, where he met with Zinaida Serebryakova, who in a letter to the painter's mother, predicted a great future for her son. And then the Holy Land entered the artist's life.

By the beginning of World War II, as the Nazi incinerators were starting to work all over Europe, Kopelovich had visited Palestine a number of times. He painted the masterpieces that would later make him famous: he "recorded" the everyday life of Jews and Arabs. He would paint under the burning and merciless sun, when the oil paints would start to melt and drip; he was painting as if under fire - no intifada could stop him. In 1939, at the beginning of the World War II, Alexander Kopelovich and his wife, the ballerina Ray, ended up in Jerusalem with almost no means of subsistence. After their first few days there, after the fear of death had started to ease a little, the couple found that they immediately had to find jobs, and the unstoppable Kopelovich found a way out. He and his wife began making paints: at first they had to make them literally by hand, but with time the paints made at the Kopelovich factory were acclaimed around the world, and the couple were no longer troubled by financial difficulties, allowing Kopelovich to devote himself totally to art. It is amazing that his father's collection was neither lost nor damaged in the calamities of the world of the time, and that he managed to rescue his step-father's collection and bring it to his new homeland from Latvia. However, the trip to Israel was not an easy one for the collection: some of the containers, including the one with "A Woman with a Rose" somehow turned up in Trieste. Miraculously, the collection escaped both numerous bombings and the Nazi occupation. Kopelovich's uncle, who was serving in the British Army, managed to find it in one of the city's railway stations which was then under the control of Yugoslav partisans. Later he organized its transportation to Naples, and from there to Israel by sea. Thus, after a few more such "adventures", Kopelovich once again received his step-father's great treasure.

Kopelovich was a regular visitor to Paris. He often exhibited there and, in 1980, he received the award of one of the best artists of France. In 1983, he was awarded the International Art Critics' Association award in New York. His exhibitions were extremely successful both in Europe and the United States. The artist had travelled much in his life, yet he always had one true passion - a passion for Russia. He died just two days short before the fulfilment of his dream.

And today, when the visitors of the Tretyakov gallery see the "Portrait of a Woman with a Rose" in the Levizky hall, a painting in which the talent of one of the greatest Russian masters truly "burst" out on canvas, it is impossible not to remember Alexander Kopelovich - a wonderful artist and a genuine keeper of timeless, eternal treasures. 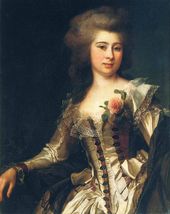 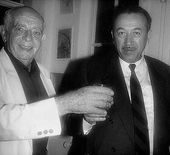 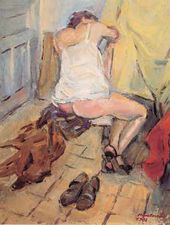 Alexander KOPELOVICH. In the artist’s studio
Oil on canvas. 68 by 54 cm