THE ANTIQUE ART MARKET IN RUSSIA ACCORDING TO GELOS

Not long ago the antique market has shown some signs of revival, following the traditions that existed in pre-revolutionary Russia. The high-profile Russian art auction held by Sotheby’s in Moscow in 1988 encouraged the start of new Russian businesses involved in trading works of art. By 1993 the number of auction houses in Moscow had reached as many as five, to say nothing of numerous antique shops and galleries. Works of art, which had long been either the decoration of the Communist party high- ranking officials’ apartments, or rubbish lying idle in dusty attics as the cast-off legacy of the Russian Empire, were brought to light and put on sale. 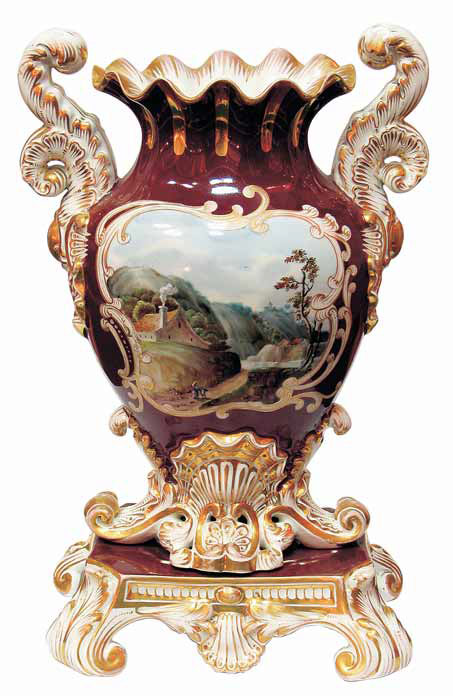 The Russian auction house Gelos was founded in 1988, modelled on the famous British houses of Sotheby’s and Christie’s, although the scale on which Gelos has been doing business is different, of course. For, as much as it tries to follow in the steps of their Western counterparts, the specific features of the Russian art market, as well as the general economical environment, has not allowed us to match Sotheby’s or Christie’s turnovers, or to make profits comparable to those of the European houses. For instance, while Sotheby’s auction around three thousand different works of art daily, Gelos can expect to auction the same number of lots during a month. 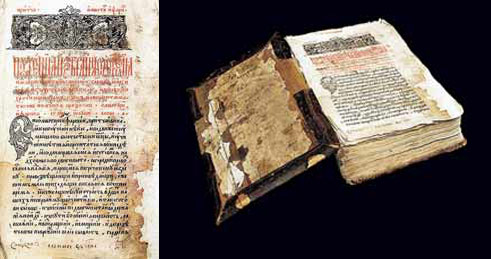 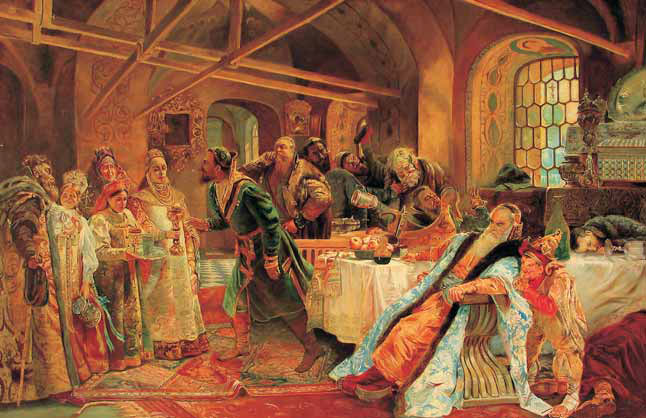 The discrepancy in both prices and volumes of sale between the Russian and European auction houses could only be accounted for by art collecting being a new - or rather well-forgotten - fashion in modern Russia, as well as by the comparatively small number of foreign buyers in the market, who are evidently discouraged by the unfriendly rules and terms for exporting works of art which exist in Russia. And last but not least, the European antique art market, unlike the Russian one, can boast of long- established traditions and mechanisms of work with their clients, as well as with hallmark names such as Sotheby's and Christie's.

According to auction reviewers, the prices for Russian works of art have been growing at an average rate of 30% a year recently, and London's auctions seem to have been mainly responsible for such pre-conditioning. Auctions as a form of sale and purchase are widely used and common outside Russia. In the hierarchy of antique market institutions, the auction house occupies the top position.

The Russian auction market presents a somewhat different picture. Here, a few dozen art salons and galleries deal with the selling and buying of art, with prices established depending on personal seller-buyer relations. Meantime, the growing popularity of all kind of auctions has encouraged some Moscow and St Petersburg companies, like Antikvariat na Sofiyskoy or Krokus City, to start auctions. The mechanism of an auction is extremely complicated: it functions like an exchange business, being the only form of trading that allows the discovery of the real cost of the commodity, in this case the work of art, and helps to set prices for the near future. No matter what kind of antique object it might be, it becomes subject to the scrutiny of the evaluation committee, who define the structure and form of its auctioning.

Gelos is the only Russian auction house at present that holds auctions weekly, monthly, by seasons as well as on some special occasions meant for art collectors. All of them differ in the quality of the lots and the prices. The art collectors' auction is the major event. They occur twice a year, usually in spring and autumn. At these auctions one can see the best art objects, worthy of any prestigious collection or museum exhibition. The clients are provided with well-illustrated catalogues which are indicative of the price rates in the Russian art market.

Monthly auctions are usually topical. Thus, an auction in March for example, should present lots with a zest meant possibly as a gift for April Fool's Day. An auction in April has, as a rule, an Easter pretext; in May, an auction of paintings and coins, and so on. The most democratic kind of auction is a weekly, or dealer's, one. They auction comparatively cheap works of art of the 19th-20th centuries. They are usually everyday life objects or curiosities, among which there may be a really valuable rarity, a find for the collector. What distinguishes these auctions from others is the concurrent participation of the owners who auction their antiques alongside professional art dealers, owners of antique shops and galleries, and brokers. Such a scheme enables the auctioneers to diversify both the character of lots and their provenance. 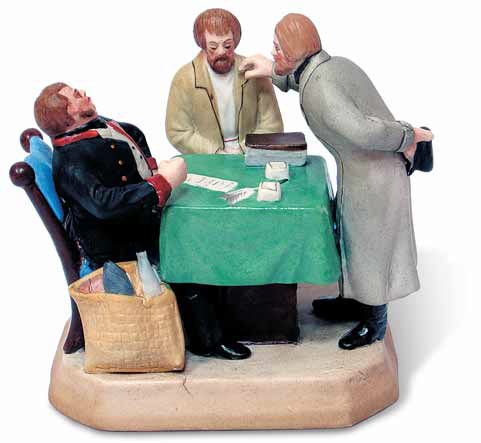 Recently, the antique art market in Russia has felt an influx of interest from abroad which has opened up new chances for the growth of the market. It came as a result of a decision to levy high import customs duties on antique works of art from January 2004. Experienced art dealers, good at sensing what kind of antiques will be in demand in Moscow, should provide them for their foreign clients. True, the process is still hindered by the existing embargo on taking antique arts out of Russia; this, consequently, prevents the trade turnover from growing. As soon as the customs barriers fall, analysts think, the situation will be balanced: some works of art should go abroad while others, numerically matching the former, should come to be auctioned in Russia.

Any fears of depletion of the antique art market sound preposterous. A market always has its own facilities for development, and the repletion of the market does not occur solely as a result of interventions from outside, but also due to its own ability to revolve, when, from time to time, an auction sale sees works which have changed hands more than once; every work of art will not belong to any one owner for more than a certain period. This accounts for a kind of circulation process of antiques which, in turn, leads to some renovation of a part of the art market.

Initially, an antique object finds itself on the market, as a rule, due to the financial difficulties of its owner. As for art collectors, the following situation is typical: one work of art from a collection is sacrificed for the sake of purchasing others. As for art dealers, they are usually motivated by a more profitable shortterm investment. In contrast, industrialists see the purchase of antiques as good long-term investments, which mainly involves buying paintings.

A painting from the brush of a certain "good" Soviet artist might, for instance, embellish the decor of a private apartment or garnish the interior and the prestige of a corporate collection before it brings some profit to its owners. Investment in antique and contemporary art is known to have yielded lately an average annual return of no less than 25%. According to 20022003 figures provided by Gelos, investment in antique art yielded 140-145% for the period with the average wait for the purchase of seven to eight months.

The 2002 deregulation of licensing for the antique business brought a growing number of looser, less-experienced art dealers. Moreover, some art research institutions have taken to authorizing documentation on works of art. So, making them "legal" has become easier than finding really authentic works. Gelos is very scrupulous in such matters. Nevertheless, their auctions always include a special category of lots offered with prior notification that a final appraisal has not yet been made.

Today, the Gelos Auction House is a full-service business involved in the provision of documentation, auctioning and compiling private collections, antique trade apprenticeship and internet auction inter-conferences. Its interests are extremely diversified: paintings of the 16th-early 20th centuries, modern art, icons, coins, jewellery, medals, philately, antiquarian books, decorative arts, antique furniture and rare wines. Gelos has assembled under one roof experts from very different walks of life, including art historians from Moscow University, antique art dealers and appraisers - all top professionals in their areas. All these factors, taken alto gether, enable Gelos to continue to be active in today's art market, and beat its competitors by its scale.

The discovery of hitherto unknown Russian painters of the 20th century is a new line in Gelos's policy, for new categories of works of art from the Socialist realism period, according to the President of Gelos, Oleg Stetsura, are becoming a powerful reserve for the market. At present, only two or three big galleries (that of Leonid Shishkin, and the 'Kovcheg' Gallery), beside other small art dealers, have interested themselves in this mine of artistic inheritance. Gelos, with its capacities and experience, is certainly able to give an impetus to this business, and build it up to a larger scale.

A rare dealer has the chance to deal with works of renowned Russian painters or masterpieces that deserve to be part of a museum collection. More often, the market is flooded with paintings by second- rate, obscure or forgotten artists who failed to win recognition in Soviet times. Nevertheless, that period has left a really enormous legacy, a "Klondike" still to be discovered and marketed.

Nowadays, when large-mindedness and client-indulgence are encouraged, you can find anything on the market - paintings in the style of the peredvizhniks, or pictures after Paul Cezanne or Igor Grabar. In a sense, an original painting by an unknown artist of the 1960s should cost more than any pseudo-Grabar, if the quality of the painting is up to standard, and the individualistic style of the artist is of good account, and can be authenticated by an independent panel of experts.

Gelos's new enterprise is to find talented painters, or collectives of painters, who worked in the mid-20th century. So, soon, the Gelos-Heritage gallery is to launch a one-man show of one such obscure painter of the 1960s, the Armenian artist Taron Garibyan. His individual manner - sometimes expressive and catchy, sometimes subtle and highly emotional - manifests itself in his still-lifes and landscapes, both extraordinarily rich in colours. In the opinion of professional critics, Taron Garibyan was a typical marginal painter with the difficult life of a man of the 1960s, who did not come from an artistic family and had never studied painting - effectively, a self- taught talent. His pictures will be introduced in a catalogue marking the opening of the show. Naturally, the promotion of an unknown painter's heritage calls for considerable intellectual and financial input, but the gallery is ready to run the venture in the expectation that such new names sooner or later should find their niche in the history of the Russian fine arts of the 20th century, and will catch the eye of art collectors.

In conclusion, Gelos does not confine itself to the auction business. Firstly, it is part of a large exhibition project sponsored by the Russian Ministry of Culture that also includes the Tretyakov Gallery, the Russian Museum, Russia's Union of Artists and many other institutions concerned with the preservation of the national art heritage. Then, to allow larger audiences to have access to pictures which remain in private or corporate collections or with the painters' heirs, Gelos has opened a charitable, non-profit educational institution, the Gelos Museum. 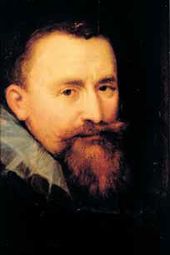 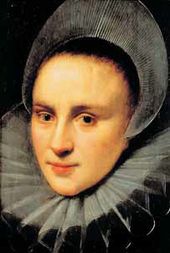 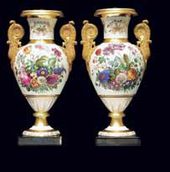 Alexander IMKHANITSKY. Bridge of the Belt Railway Line. 1966
Oil on carton. 52 by 72 cm 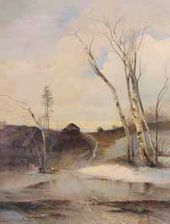 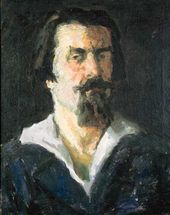 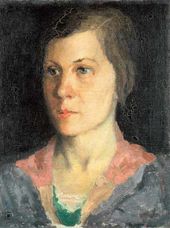 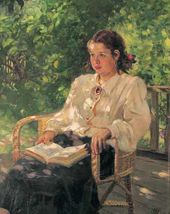 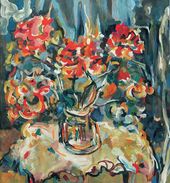