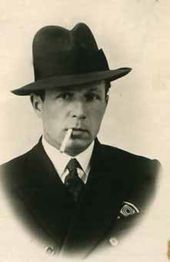 Omsk, 1920s: Without a shade of hesitation, three young men—Viktor Ufimtsev, Boris Shabl-Tabulevich, and Nikolai Mamontov, established the first avant-garde art association in Siberia called “The Three of Hearts”, in allusion to “The Knave of Diamonds”.

Their association was not homogenous, and just like so many artistic groups of the early 20th century soon fell apart.

Ufimtsev focused his interests on Central Asia; Shabl-Tabulevich went to Moscow to study in the studio of Alexander Osmerkin. Mamontov tried to enter the Higher Art and Technical Studios but failed: he was told that he was already a completely professional artist, and there was nothing else he could benefit from with formal artistic education. In 1924 Mamontov married a daughter of artist Dmitry Stepanov, and together with the latter’s family left for Italy. While in Rome, he was a member of the exhibition association “Fiamma” (Flame) and participated in the group’s exhibitions. In 1930, his first solo exhibition also took place in Rome.

Suffering from nostalgia for his homeland, Mamontov returned to Russia in 1932. There, he made his living from occasional jobs such as restoration work in the Hermitage, as an artist with the Mint, a book illustrator, a stage designer in the drama theatre in Vladimir; effectively, he took all jobs to which he could apply his skills. In 1936, he was arrested and sentenced to five years of compulsory labour, decorating health resorts in Pyatigorsk.

Having traveled so widely, Mamontov’s life came to the end in Saratov where he worked in a modest position of an instructor with the department of architecture of the local Roads and Automotive Engineering Institute.

Mamontov loved life and art, often not caring to separate one from the other. That is why the slightest emotion from an artwork by another artist — whether the latter belonged to the past or was his contemporary — a life episode, certain fragments of paintings that he happened to restore, a child’s drawing, ancient myths re-processed in a humorous vein, an overheard fairytale — all these made up the subject of his artistic concerns. By preserving the innocence of a sudden feeling, a fleeting image or a dream, by knowing well and possessing good skills in the artistic technologies of both the past and contemporary art, he was capable of moving freely within any layer of time, transformed, it seemed, into a representative of another day and era, almost a twin to his own contemporary self.

In his “designed” world, Mamontov seemed to keep balancing on the edge of the primitive and high art, with a somewhat somber mysteriousness, a mysticism and utopian carelessness, in his detailing of characters and playing with genres: a still life with porcelain figurines which is transformed into a sea adventure with pirates and kidnapped maidens; the ballet skirt of a dancer kissing a clown which becomes eerily similar to the wings of either good or bad spirits. At the same time, the freshness, brightness and immediacy of the colour alongside the mature wisdom of his craft transforms his paintings into objects akin to brightly-coloured woven rugs, kaleidoscope lights, or meadows covered with magical flowers. Africans, the Kyrgyz, pirates, English colonists, tender familiar ladies — looking funny in their flirty behaviour — cats, dogs, panthers, crocodiles, exotic animals, extraordinary flowers fragrant with subtle shades, the circus, the silly hats of “fashionistas”, strands of multi-colour beads: all these created images of the Paradise which is in concentration shown in the work of the same name. Here the laws of gravity are partially altered, with people flying next to birds, and six-winged seraphs playing with animals. In the lower left hand corner, replacing the signature, there is an image of a new Adam on the shore of some lake of Eden. This Adam is the nude, clay-tinted tanned artist wearing his favorite well-worn felt boots. He is in the process of creation. He has a pulled up canvas in front of him, two glasses (for one!), and a bottle hanging in the air from which some water-clear liquid is being poured out. Everything in the image is crowned with a fantastic rainbow.

The 20th century was rich in a multitude of discoveries, out of which Mamontov selected the most interesting ones; later they became an integral part of his art. Hence this mixture of seemingly mutually exclusive methods of symbolism and the avant-garde in his early works, and the combination of often puppet-like interpretation of images with the classically tried and tested composition in his later pieces.

After the artist’s death in 1964 his legacy was scattered among his family, acquaintances and neighbours. Many of his paintings were saved by a Saratov artist Vladimir Solyanov. Later he transferred them to Irina Devyatiarova, the first researcher of Mamontov’s legacy. Today these works are a part of the collection in the Vrubel Fine Arts Museum in Omsk while some of them are displayed in the Omsk Local History Museum, the Ra- dishchev Museum in Saratov, the Petrov- Vodkin Museum in Khvalynsk, or remain in private collections. 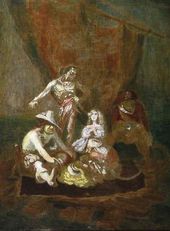 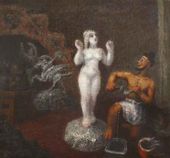 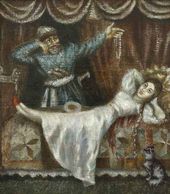