The Optimistic Palette of Viktor Glukhov

The Tretyakov Gallery is proud to present an expanded exhibition of paintings by Viktor Glukhov, People’s Artist of the Russian Federation (b. 1946), long-time head of the Moscow Union of Artists and a member of the Presidium of the Russian Academy of Arts. Glukhov has always been a good friend to the Tretyakov Gallery and has helped with the successful development of its programmes on many occasions, lending a helping hand and support in sometimes complex situations. 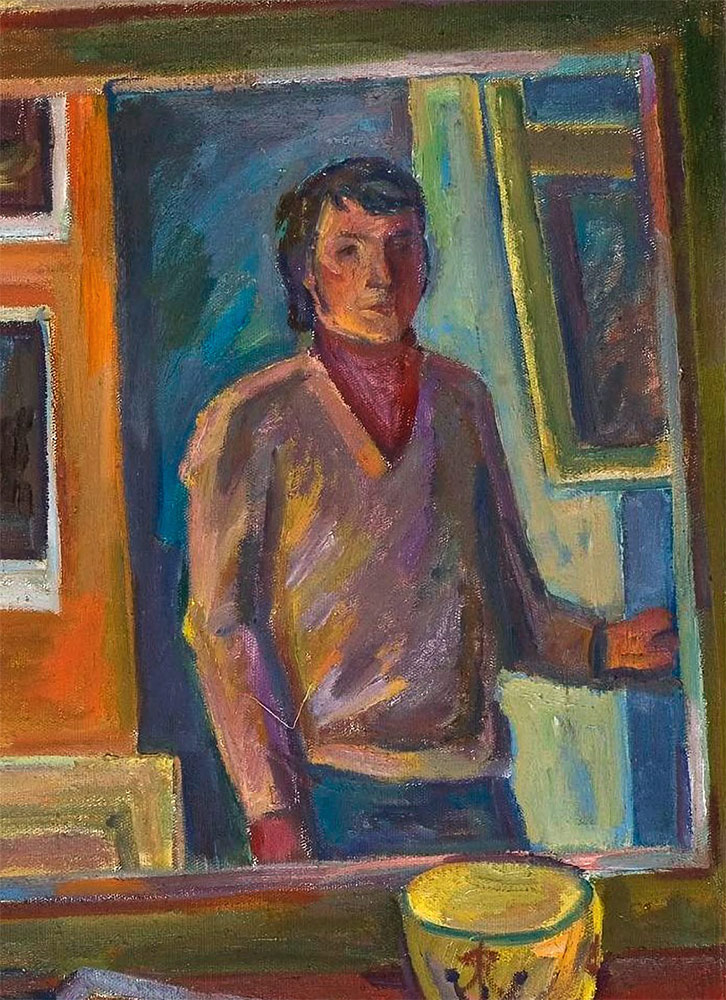 The artist’s work is very personal and, in many ways, even autobiographical. It is far from the external pathos, commotion and drama of the modern world, although it does reflect the realities of contemporary life. The home-studio in which Glukhov has lived and worked for many years and in which he constantly seeks refuge from the bustling capital is located in the small town of Skhodnya, not far from Moscow. Most of all, he prefers to paint portraits of those close to him, landscapes of Skhodnya, his adopted hometown, and still lifes of the objects that surround him. He is loyal to these chosen themes, one of which - the theme of childhood - has occupied the leading place in his oeuvre over the last five years and has been partially exhibited at the Tretyakov Gallery.

Glukhov’s extended exhibition is opened by two works from the Tretyakov Gallery: “Self-portrait. Mirror” (1985) and “Winter in Skhodnya” (2009). The self-portrait is the earliest work included in the exhibition and, in it, we can already see the special characteristics of the artist’s figurative language: attention to the complex, multidimensional structure of space, an interest in colouristic experimentation and a love of still lifes. “Winter in Skhodnya”, like many of Glukhov’s other landscapes, demonstrates the fruitful blending of the artist’s soul with the place in which he lives and works, revealing a genius loci (lat. “genius of place”) which in turn forms the basis for new artistic discoveries.

The majority of the exhibition is given over to pieces from his childhood cycle, the formal reason for this being the President’s declaration of the Decade of Childhood in our country from 2018 to 2027. The Moscow Union of Artists, led by Glukhov, responded to this event with a series of exhibitions around the theme of childhood, which were held in Moscow and are currently continuing in regional exhibition spaces. The theme of childhood has been firmly incorporated in the master’s work and remains a crucial feature of it to this day. According to the artist himself, it is important for him to show how bright, joyful and filled with toys the world of childhood should be - so different from the difficult postwar years in which Viktor’s own childhood passed, when the best present he could receive was an apple brought by his father.

Initially, Glukhov’s childhood cycle was comprised of depictions of his grandson, Makar, and children of the artist’s friends and acquaintances, but, with time, it developed until it became a generalised reflection of a world that is close to us all, understandable and remembered. In his art, Glukhov embodies adults’ memories of the past - memories of childhood dreams and hopes for the future, of beloved holidays and toys. It is no coincidence that he has tackled, more than once, the theme of New Year and the image of the Nutcracker.

The genres represented in the artist’s works on childhood are very diverse. Most are portraits. In his sketches of children’s heads, you can feel their delicacy and softness, purity and defencelessness, their sometimes dolllike beauty and, at the same time, the vulnerability and fragility of a child’s world (“Nika”, 2021). His large-format portraits in an indoor setting (“New Year Approaches”, 2020; “I Love my Little Horse”, 2018) strike one with their decorativeness and monumentality. The artist leaves behind the chamber elements that are characteristic of classic infant portraits and creates a modern painting, filled with bold experiments in colour and compositional space within the bounds of figurative painting. His depictions of children often develop into ceremonial, representative portraits. An example of this is “The Little Red Flower” (2021), in which the intensified colour of the background, reminiscent of enlarged patterns of coloured glass like those found in a child’s kaleidoscope, acts as support for the little girl’s bright costume and, of course, her luxurious satin ribbons. This open decorativeness serves as yet another reminder of the wonderful fusion that has taken place in Russian graphic art of the distinctive elements of Eastern and Western cultures.

Glukhov has his own manner of conveying a child’s image. He not only uses large-sized canvases, but also enlarges the figures themselves, putting them in the foreground, as close to the viewer as possible. As a consequence, Glukhov’s childhood images garner a certain monumentality, significance and unmistakeable recognisability.

Glukhov also explores the theme of childhood in his many still lifes, which form a constituent part of his portraits of children, as well as being independent works of art. They are filled with simple objects such as uncomplicated childhood toys, often acquired at the flea market in Skhodnya. A rag doll and the Nutcracker, painted toy soldiers and wooden horses, all kinds of balls and Christmas-tree decorations, music boxes and books, musical instruments and coloured fabrics all shift from one painting to another, acquiring a new emotional colouring each time. The artist creates a calculated compositional structure from the combination of these various objects and their relations in terms of space and colour. They are imbued with expressiveness and dynamism by the complex bouring halls with its severe “truth of life”, its restrained colouring and vividly expressed social and ethical orientation. Glukhov was personally acquainted with many of those artists and they exerted an important influence on his creative path. Notional, compositional and colouristic intersections between the works of artists of different generations are also obvious: an invisible dialogue arises between artistic images that are semantically close and all of their own time, refracted via individual creative journeys, visions and interpretations.

Such an interchange is experienced between the two portraits of children depicted astride toy horses: one, by Tahir Salahov, is a portrait of the artist’s daughter (“Aidan”, 1967, Tretyakov Gallery) and the other, by Viktor Glukhov, is a portrait of his grandson (“I Love my Little Horse”). For all their similarity in terms of spatial composition and the expressed monumentality of these two pieces, the unique features of each approach are also apparent: the extreme economy of Salahov’s almost monochromatic image, and the open decorativeness and wealth of detail in that of Glukhov.

If we turn to the works of Pavel Nikonov and Nikolai Andronov, “Geologists” (1962) and “Rafters” (1960-1961, both at the Tretyakov Gallery), which are executed in a pathos-filled manner, with an emphasis on hyperbole and the coarse, brutal nature of the subjects, and compare them with those of Viktor Glukhov, one notices the different emotional intonations of lyrical content revealed by the latter, intonations which lead the viewer’s gaze away from social acuteness towards a more buoyant view of reality.

Leaving behind the problematic and openly social engagement, even dramatism, which is apparent in the paintings of the generation of the 1960s, Glukhov lends his works an optimistic, life-affirming character that reflects the main creative principle of the artist: “To see the miracle and beauty of life in simple and even banal things is one of the artist’s most important tasks." 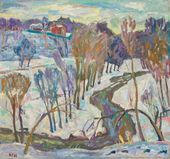 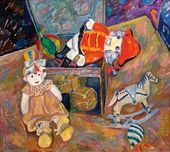 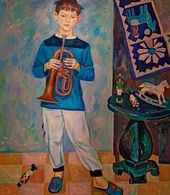 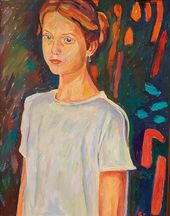 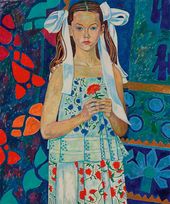 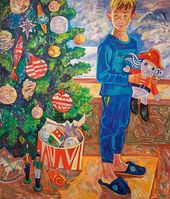 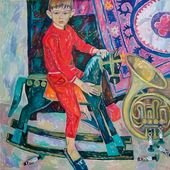