MMOMA (The Moscow Museum of Modern Art) on Petrovka Street has hosted Moscow’s first retrospective exhibition of works by Markus Lüpertz, a renowned German painter who has had an immense impact on several generations of artists and whose creative work is irrevocably interwoven with the history of German postwar art. 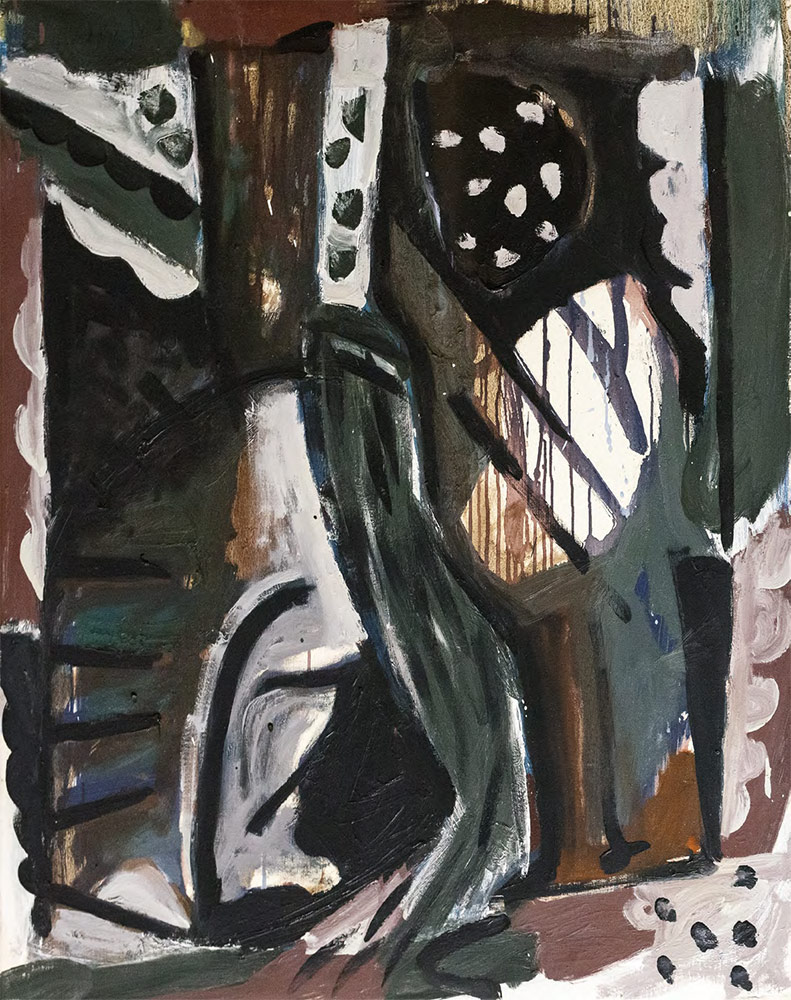 The exhibition features a number of Lüpertz’s landmark paintings and sculptures. They represent a kind of metaphorical narration about artforms, about the techniques used in the language of painting and about the boundaries and outlines of this language’s potential. The artist’s images resemble very personal, subjective and lyrical statements; these are the stories and motifs that have fascinated him for decades. They include the Graeco-Roman and Academic traditions, 20th-century art and elements of mass culture. As the artist himself puts it, the best thing you can do is ‘reinvent’ something from the past[1].

The pieces selected by the artist for the exhibition - which range in period from the 1960s to the present - provide a rich and comprehensive overview of his art. Lüpertz rose to fame in the early 1960s, after his first solo show at Grossgorschen 35, a small and short-lived Berlin gallery. Some of the other artists exhibited at the gallery, such as Karl Horst Hodicke, Hans-JQrgen Diehl, Wolfgang Petrick and Peter Sorge, were kindred spirits of Lüpertz. The artist presented his dithyrambic compositions at the gallery - experimental pieces whose abstract idiom was built on a totally different foundation than was usual at that time.

Art scholar Richard Shiff describes the dithyramb as “a warm, glowing figure against an open, opaque blue ground, this “dithyramb” appears to hover, which is nonsensical. A dithyramb is a literary form, not a physical thing. As a concept or conceptual abstraction, it can neither hover nor crash.”[2] It was precisely this fairytale, literary myth that became a peg, the starting point for the entire MMOMA exhibition. As soon as viewers enter the exhibition space and take their first steps inside it, they are carried away on a journey to the other side of what is conceivable by reason - the first section features paintings from the “Alice in Wonderland” series (1980). These expressive, complex and intense compositions draw on the tradition of early-20th-century German Modernism, combining it with some features of later works by Lüpertz’s contemporaries who revisited Art Brut - for instance, Per Kirkeby or Asger Jorn. The unconscious, with its inflexions and gradations, its facets and shades, is the cornerstone of the artist’s painting practices. He employs expressive forms drenched in constant reflection, marking boundaries between deliberate artistic actions and play, fortuity. As one would expect, the artist engages with the imagery of masks and uses this theme and variations of it in his four-part series called “A View of Salzburg: Bergheim” (1983), as well as in several self-portraits, where he is pictured as different historical and imagined figures, from Dante Alighieri to an abstract generic zombie (1983). A theatrical motif is a foundational principal of the artist’s entire body of work - he not only uses it as a narrative but also incorporates it into his mundanity.

Reflecting on the role of an artist was an extremely important part of postwar cultural life. Unlike many of his contemporaries, Lüpertz does not fall back on performative practices; rather, he consistently works on creating - or, if you will, modernising - the persistent myth around the Modernist image of the painter, such as it was at the close of the century, having already lived through “the death of the author” and a collapse of familiar art systems. In his own figure, he creates a dandy, a demanding and finicky aesthete who, with consistent adroitness, easily and offhandedly, deliberately and ironically, flaunts his talents and plays on international cultural heritage. In this context, his attempts to convey the face and character of modernity by interpreting the art of the past are of special interest.

There is little doubt that much in the artist’s strategy is cognate with Pop Art but although Lüpertz adopted the potential for integrating and utilising new visual components that distinguishes such artists, he makes no effort to explore modernity with its fleeting, momentary and incessant changes. Lüpertz, in whose works one can easily discern the influences of Max Beckmann and Wilhelm Lehmbruck, approaches modernity using the tradition of the old masters and brings back into focus the image of a painter who works with “real” and muddy paints, dense and textured. This important question about the return of painting and of Neo-Expressionism became especially prominent in the late 1970s to early 1980s and Lüpertz was one of the first to pose it.

Lüpertz belongs to the same generation as Anselm Kiefer and Gerhard Richter, who employed the traditional language of painting to formulate the most essential and sensitive questions of German postwar society related to historical memory and the problem of “dealing with the past”. Another reason for the rise to fame of Lüpertz, an enfant terrible of the local art scene, was his provocative compositions rich in militaristic symbols and evocative of the recent tragic experience of World War II. Several rooms at the exhibition space feature pieces devoted precisely to this theme. Two compositions, “Quilt - Dithyrambic” (1967) and “Track - Dithyrambic” (1968), which are impressive for their grandiosity, fundamentality and dazzling directness, engage with the trauma, both unendurable and indescribable, caused by the war experience of the 20th century. Against the backdrop of these sketchily pictured landscapes of the badlands, the viewer heads on for an encounter with the series “Men Without Women. Parsifal” (1994), one of the pivotal heroes of German legends, virtually the national myth. Haunting Lüpertz’s compositions, this figure, in different variations, reappears again and again, falling apart, its fragments never coming back together. Parsifal’s visage never acquires familiar features and it is his image that epitomises the artist’s idea of the country’s postwar face.

Repetition is a significant technique that Lüpertz often uses: he evokes schooling, classic art, the acquisition of painting skills, the honing of technical ability. From the beginning of his career, the artist has had a habit of creating copies of his own works, producing several versions of the same image. One of the rooms at the exhibition is solely focused on nudes (“Nude Back”, 2006). The artist was inspired to create this piece when he had a fleeting memory of having seen the back of his naked wife. This memory spawned a whole series of works featuring a lonely, naked subject surrounded by various symbolic elements characteristic of many of the artist’s compositions. These include details of Nazi uniforms, such as peaked caps or helmets, and nature-themed mythopoetic motifs. This image epitomises the feelings of a person grievously reflecting on the badlands of the past. 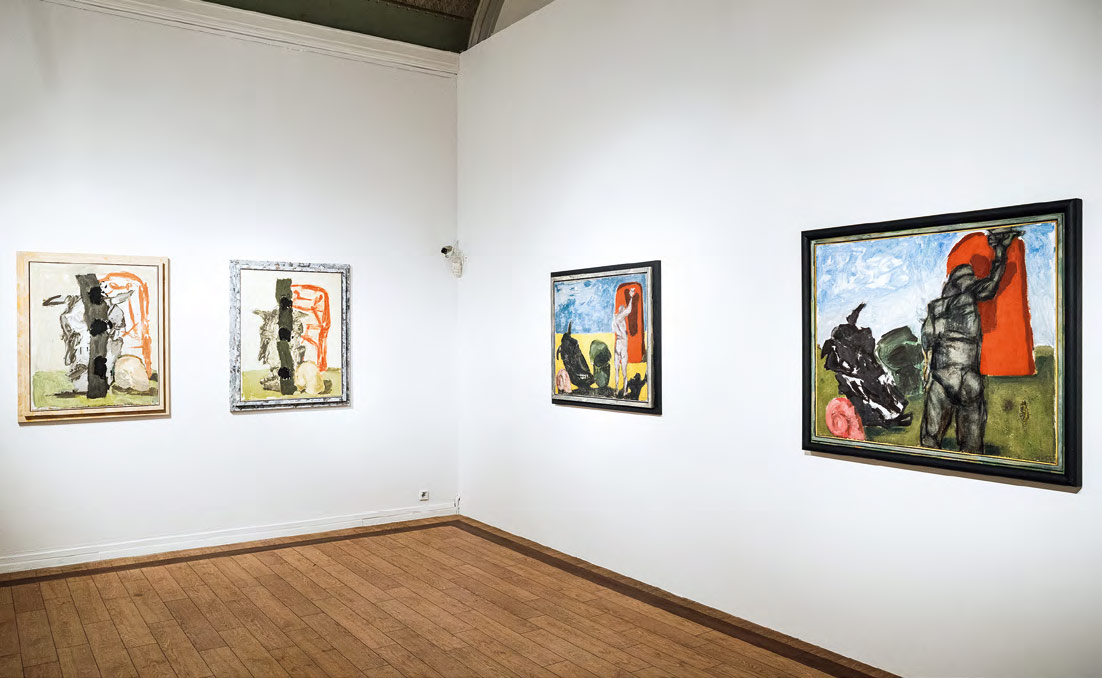 A separate room showcases works produced in 2021 (“Moses”, “Moses II”, “Pillory I-II”, “Death of a Girl”, “Charon”), in which Lüpertz creates the image of a person focused on creating memorials and remaking ruins, endlessly reflecting on the past, including the past as the present, a person that is doomed to fall behind. 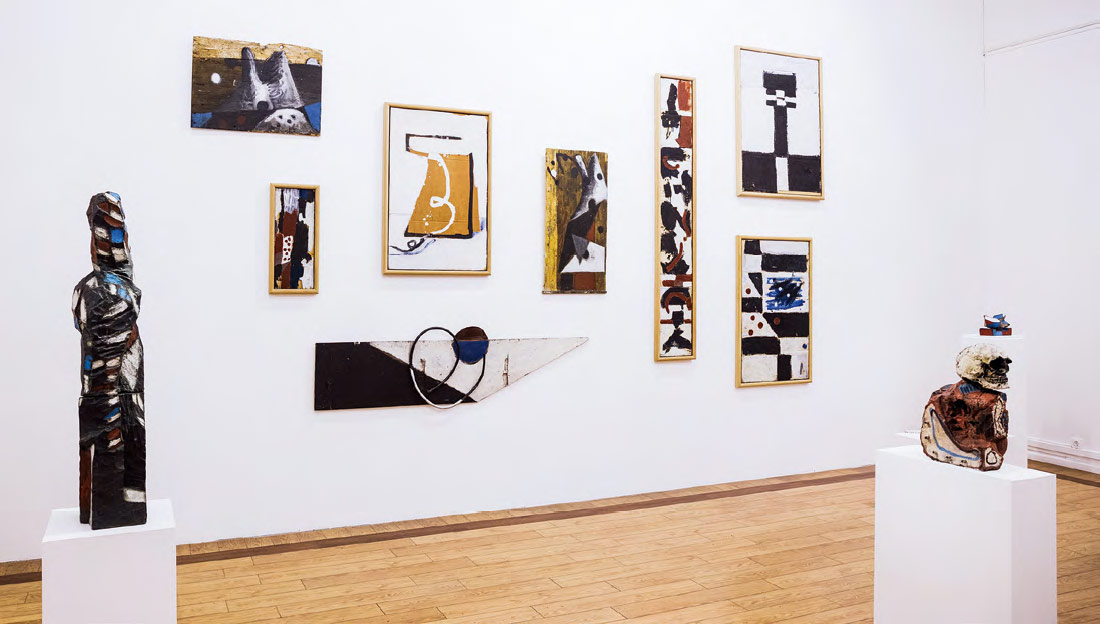 As early as the 1960s, when the artist addressed his country’s war experiences and modern history, he invented his own metaphorical language, his own method of speaking about the interconnections and rhythms running through the entire history of culture. He created an allegorical element - “the meaningless object”, in his own words - which has come to be known as “dithyramb” in honour of the ancient Greek hymn, the chorus song glorifying the god Dionysus. The classic “dithyrambs” of the 1960s, which have become iconic, occupy a separate room. In the artist’s compositions, the “dithyramb” is represented as a semi-abstract monumental symbol evoking Friedrich Nietzsche’s concept of the Dionysian - the exaltation of abandon, the ecstasy of destruction, the nature of catharsis. For the artist, this theatrical “silent” image becomes a starting point for further visual experiments and ever deeper engagement with motifs of antiquity. The exhibition features several compositions with the dithyrambic images - in other words, images eliciting the symbolisation of ecstatic experiences. A separate room features a display of the earliest and most iconic versions of this motif (1964). The “dithyrambs” are geometric figures soaring in the air; they are forms that are ideal and at the same time erased, encrypted. The viewers are introduced to images along the lines of concentrations, clots and moulds of the world’s visual culture compressed into one solid whole. These compositions draw on the visuals of the logo of the film production company 20th Century Studios: the text becomes three-dimensional like a sculpture and solemnly rests amidst the azure of the sky. This is how Lüpertz’s “dithyramb”, with all its object-materiality, is formed. As Richard Shift most aptly noted, “Explaining an artist’s way of viewing the world, Markus Lüpertz once alluded to aerial suspension: “To be in an aeroplane that doesn’t land. To seize hold of the world [from above], this is the artist’s dream”.[3]

Lüpertz continued to use metaphorical forms in later works from this series. Some of the compositions from his “irrational retrospective”, such as “Wood Shingles - Dithyrambic” (1966), “Tree Trunk - Dithyrambic” (1966), as well as a series of sketched murals (1982), contain direct allusions to German Romanticism, the natural world, and the archaic vocabulary of wooden sculpture. In Lüpertz's interpretation, this tradition takes on ironic quasi-religious overtones, a kind of tribalism in which the magic and mystical image of the sylvan world acquires syncretic outlines of different national cultures.

The “dithyramb” is also a way to speak about the modern city, whose image Lüpertz shapes through allusions to German film expressionism of the 1920s. Using the “dithyramb”, the artist also addresses the problem of monuments per se, in his pieces “Monument - Dithyrambic” (1976), in which he bluntly puts the question about the co-existence of trauma and mundanity, of banality and the memorialising historical experiences.

The artist’s never-ending dialogue with the past ultimately leads to the total dissolution of all recognisable figurative elements into abstract combinations of colour fields, as we can see in the series called “The Style” (1977). These pieces, which appear like a mirage in the last section of MMOMA’s exhibition, provide a logical finale to the semi-fairytale narrative promised at the beginning of the display - although, as often is the case in such situations, the story, having barely ended, could smoothly and easily start anew.

The artist’s faculty for metamorphosis is one of the distinctive features of his visual language, which, at the same time, is quite uncompromising. This combination of subtlety and hardness, softness and rigidity, the unconscious and the rational form the special aesthetic texture of his language - a texture distinguished by opacity, doubt and ambiguity. The associative chaos of the layers of visual culture in each of Lüpertz’s new pieces gradually demonstrates to the viewers that painting is a thought process. As the artist himself puts it, “Nothing remains hidden, all comes into sight”[4]. The magic of Lüpertz’s art is based on its unfailing relevance to the present time, touching as it does upon the most crucial and painful questions of modernity, with its slowly healing wounds and millennia-old unending hymns. 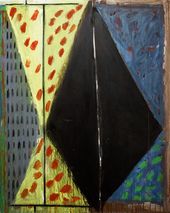 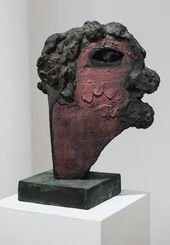 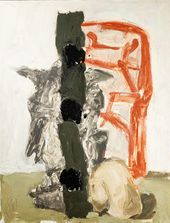 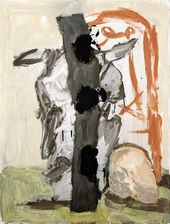 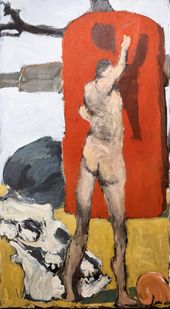 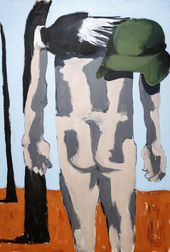 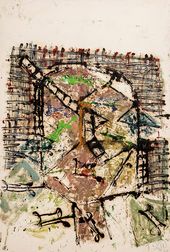 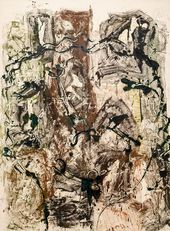 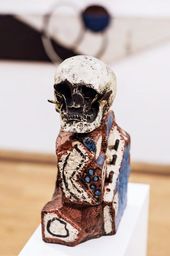