This special anniversary issue of the “Tretyakov Gallery Magazine” is devoted to those two tragedies of the 20th century, the most atrocious world wars in human history, to their participants and witnesses. Most of all it is about the Victory of the nations of the Soviet Union in the Great Patriotic War of 1941-1945, about the living memory that cannot be falsified, idealized or allowed to recede into history. Like the handful of surviving eyewitnesses of this tragic and heroic chapter in history, like their descendants, it is works of art that preserve the memory and teach people to respect our country’s past and take pride in our Motherland. 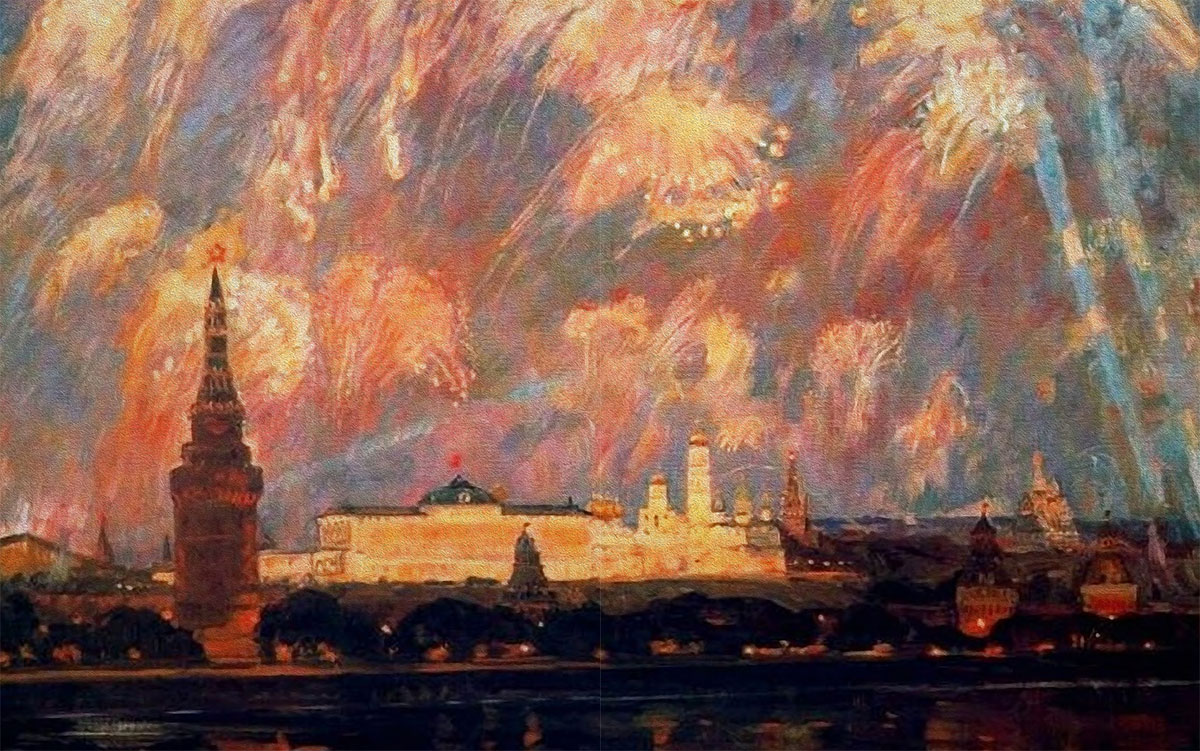 Citizens of Russia and countries near and far, descendants of, and heirs to the soldiers who brought Victory and the participants and veterans of World War II and the Great Patriotic War - all carry in their memory the pain of irredeemable loss, while also taking pride in the bravery and heroic exploits of their forefathers, those who set the world free from the scourge of fascism. 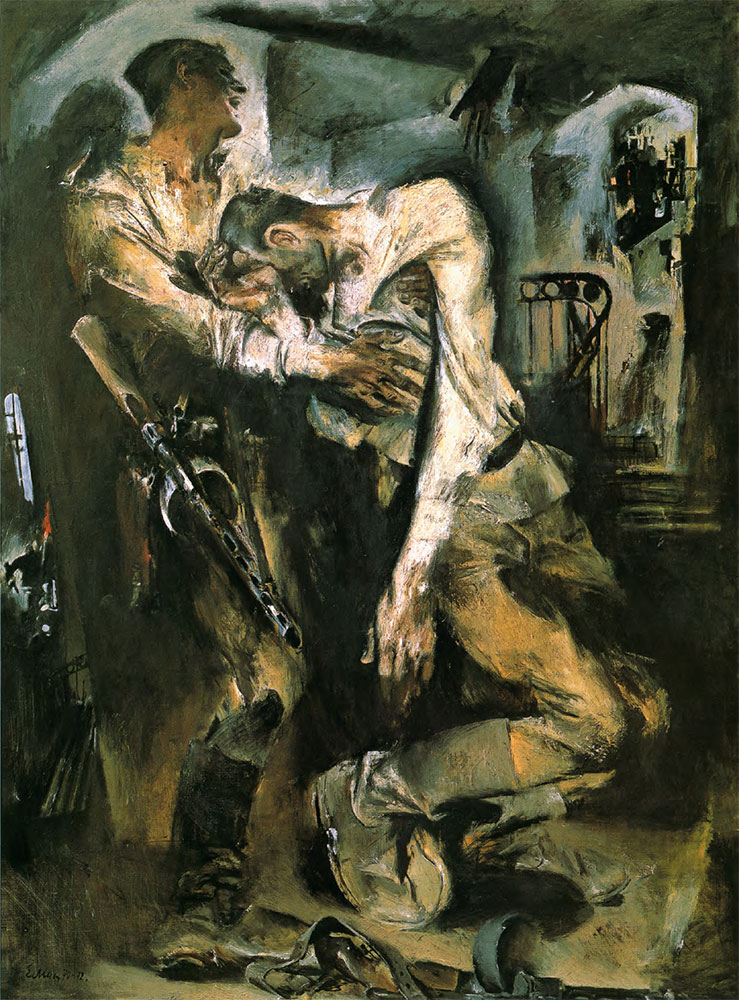 The freed world remembers the levelled cities and villages, the destroyed architectural landmarks, the burnt libraries, the pillaged museums... And it was to ensure that this never happens again that soldiers of the Red Army and its allies, workers on the home front, as well as French resistance fighters, members of resistance groups in Yugoslavia and Italy, Greece and Bulgaria and underground units in Slovakia and Belgium performed their feats of bravery.

Art plays an important role in keeping alive the memories of wars - it alone can reflect the facts and events of an era and spiritually transform, prevent and forewarn. The work of these artists, poets, writers, film makers and photographers is the symbiosis of documentary evidence and spiritual consolidation of sensations and emotions, the symbiosis of the truth of reality and the truth of art.

In this issue the reader is certain to encounter familiar names and references to familiar works of enduring value: this is true both for the prominent Russian artists and the galaxy of their outstanding Western counterparts. 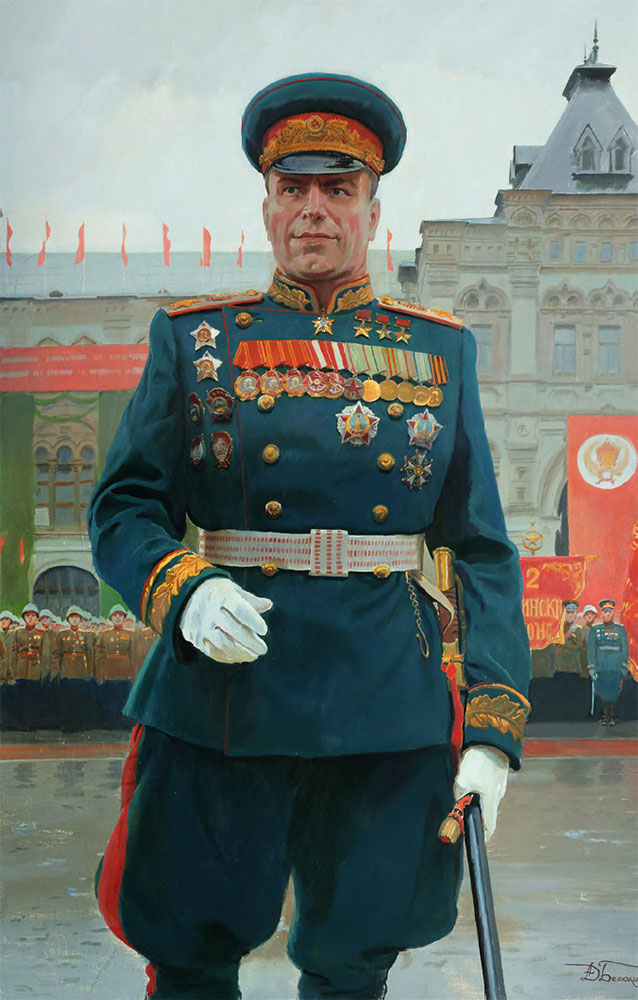 Art and war, art on the frontline: these notions do not go together naturally on logical grounds. Let's remind ourselves of the distant past, the works of great artists from across the world, the tragic narratives and symbols of suffering and horror in the etchings of Jacques Callot and Francisco Goya, the compositions of Vasily Vereshchagin and Salvador Dali, Alexander Deineka and Pablo Picasso, the sculptures of Henry Moore and Ernst Neizvestny, Yevgeny Vuchetich and Vera Mukhina, the paintings of Ernst Fuchs and Mikhail Savitsky, Yevsei Moiseenko, Renato Guttuso and Renzo Orvieto. 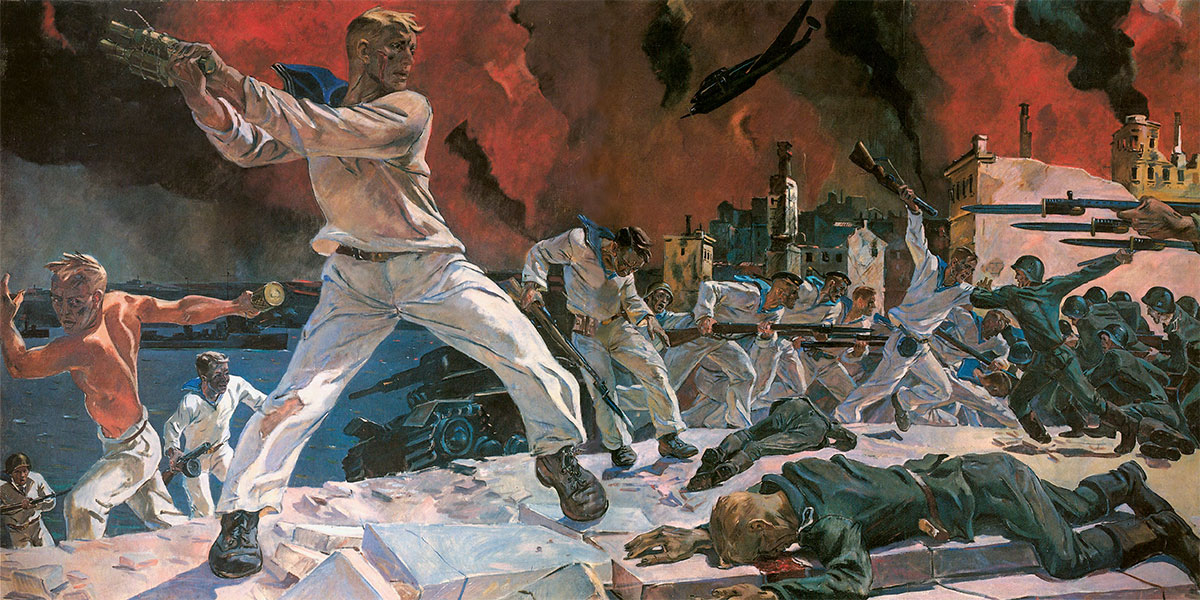 It would be sufficient to remind readers about just a handful of widely known works of the great Soviet 20th century masters: Irakli Toidze's poster “Motherland is Calling!"; paintings such as Alexander Deineka's “Defence of Sevastopol", Arkady Plastov's “The Fascist Plane Flew By", Konstantin Yuon's “Parade on Red Square. November 7 1941", Pavel Korin's portrait of Marshal Georgy Zhukov; Gely Korzhev's series “Touched by the Fire of War" and the Kukryniksy's “Windows of TASS" (the Telegraph Agency of the Soviet Union); memorial complexes such as Mikhail Anikushin's “Monument to the Heroic Defenders of Leningrad" in St. Petersburg and the complex on Mamayev Kurgan in Volgograd, with Yevgeny Vuchetich's august statue of the Motherland.

In any such ranking a prominent place is held by films such as Mikhail Kalatozov's “The Cranes Are Flying", Grigory Chukhrai's “Ballad of a Soldier", Sergei Bondarchuk's “They Fought for Their Country", Sergei Gerasimov's “The Young Guard", Rezo Chkheidze's “Father of a Soldier", Andrei Tarkovsky's “Ivan's Childhood", Yury Ozerov's epic series “Liberation", Elem Klimov's “Come and See", Nikita Mikhalkov's “Burnt by the Sun" and Mikhail Romm's documentaries.

It was only natural that when our peaceful homeland began to feel the pain of war, evacuation, back-breaking toil and bombardment, the first responses came in compositions combining music and poetry: among works that immediately come to mind is the thunderous “The Sacred War" to the music of Alexander Alexandrov with lyrics by Vasily Lebedev-Kumach. Sergei Mikhalkov's angry satires and the Kukryniksy's biting caricatures stirred especially strong emotions. In no time, the era also produced works of art that would win recognition across the civilized world, such as Konstantin Simonov's expressive and heart-felt poem “Wait for Me", Olga Berggolt's poetic hymn extolling the fortitude of Leningrad under siege, Alexander Tvardovsky's poem “Vasily Tyorkin", equally admired by soldiers and workers on the home front, and Dmitry Shostakovich's Seventh Symphony (the “Leningrad"); later came works by Sergei Prokofiev, Georgy Sviridov and Alfred Schnittke. During the war and in the difficult times that followed we lived to the accompaniment of songs whose lyrics had been created by soldiers of the Great Patriotic War, like Mikhail Matusovsky, Alexei Fatyanov, Yevgeny Dolmatovsky and Bulat Okudzhava.

Loyalty to traditions, deep-seated patriotism and pride in our triumphant forefathers are also the hallmark of the creations of many post-war poets: Rasul Gamzatov and Robert Rozhdestvensky, Yevgeny Yevtushenko, Bella Akhmadulina and Andrei Voznesensky, Samad Vurgun and David Kugultinov, Andrei Dementiev and Mikhail Nozhkin. Alexandra Pakhmutova's songs to Nikolai Dobronravov's poems, the songs of Vladimir Mulyavin and the group Pesnyary, as well as the famous series of war ballads created by Vladimir Vysotsky. All these works were to stay in the public memory for a very long time.

This inexhaustible subject has been covered in many books and articles, its historiography in the field of art expanding continuously.

In an article devoted to the 70th anniversary of Victory, the art historian Alexander Morozov wrote: “The experience of the Great Patriotic War found a crucial place in the heritage of Soviet-era art. And this is not surprising. There are two reasons for this. First, the war experience has continued to stir strong feelings in Russian society to this day, its existential conflux of tragedy and triumph scorching the people's hearts. But at the same time official interest in the subject has always been strong, since the state has considered it as one of the crucial instruments for cultivating Soviet patriotism and political stability in society."

Celebrating the 75th anniversary of the historic victory over fascism, we speak about Memory as a road of life, valour, heroism, immortality. In our consciousness the ideas of Victory in the Great Patriotic War and Memory of that war cannot be separated. The memory keepers are the participants and veterans of war, their children and grandchildren, the descendants of well-known and unknown heroes, and, of course, cultural figures.

With its long-standing tradition of patriotism, our national art has long been imbued with a sense of civic moral responsibility for what is happening in our country, for its past and present. And the first to respond to the fascist troops' treacherous attack were musicians and poets, poster designers, caricaturists and graphic artists, journalists - all figures on the multinational Soviet cultural scene who “placed the pen on the same footing as the bayonet". Some of these personalities were familiar with, and learnt from the experience of their predecessors - those senior colleagues who had worked during World War One and the Civil War.

This torch was picked up by post-war poster artists such as Oleg Savostyuk, Boris Uspensky, Miron Lukianov and Yevgeny Kazhdan. For all the diversity of their aesthetic platforms and for all the individual variations in their styles, their works highlighting the fortitude and courage, suffering and hope of the homeland's defenders on the frontline and on the home front share something in common - an emotional involvement in their nation's destiny, a sense of spiritual uplift, an exemplary style.

The posters and paintings, drawings from nature, compositions in oil and sculptures created by artists of different generations, both those who experienced wartime privations and those whose careers began after the war - these works are priceless artistic accounts drawn from an unfading memory. Their creations formed a chronicle reflecting deep inward responses to that heroic era. 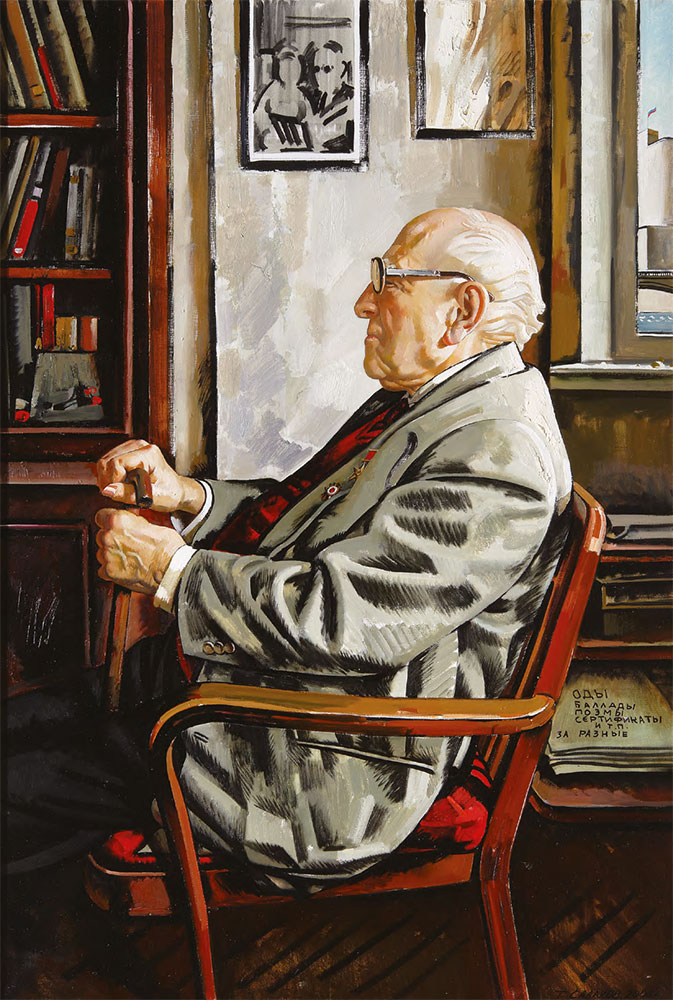 In today's world we are confronted with new risks of environmental, economic, political and revanchist nature. We all are responsible for the future of the civilization on our planet, no matter what our political beliefs and leanings, religious affiliations and race may be.

The 75th anniversary of the Great Victory is not just an occasion for celebration but a momentous landmark in human history that binds us together across the decades and generations and prevents people from being turned into robots that are incapable of feeling and contributing to the store of universal, humanistic values. 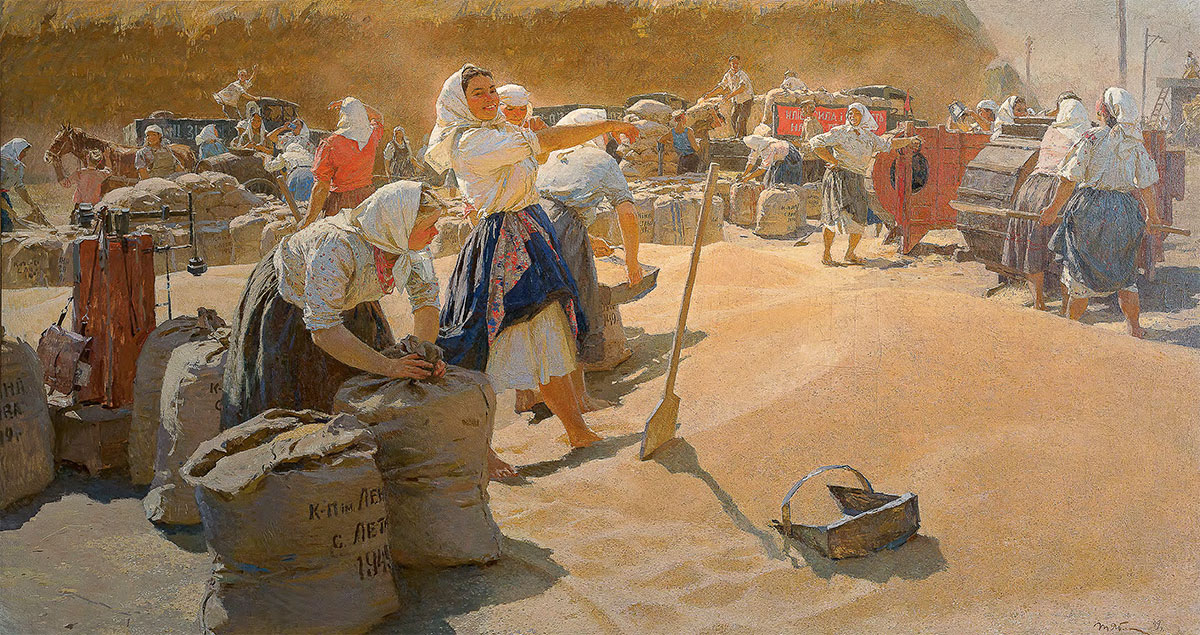 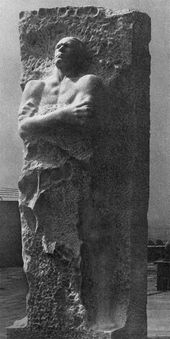 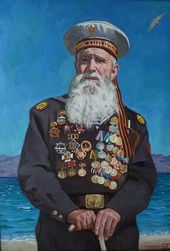 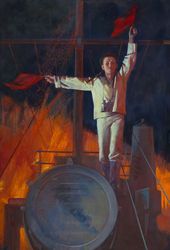 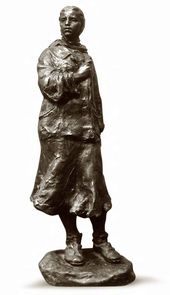 Anatoly BICHUKOV. Monument to the Defenders of the Russian Land. 1995
Bronze, granite. Moscow 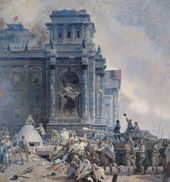 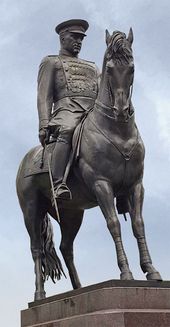 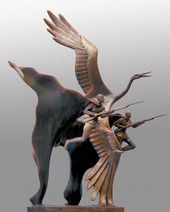 Igor OBROSOV. In Memory of the Ashless Burial of Husbands, Brothers, and Children. Dedicated to V. Popkov. 2004
Tempera on canvas 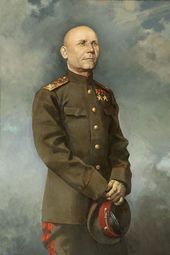