Marat Samsonov: The Record of War

Marat Samsonov (1925-2013) had always dreamed about becoming an artist, but the Great Patriotic War interfered with his plans. The son of a Red Army commander who died fighting in the battle for Leningrad, Samsonov duly became a professional soldier. Yet his artistic dream would come true, too, and in time he would become a member of the Academy of Arts, as well as receiving the title People’s Artist of Russia. Alongside his involvement with panoramas and dioramas of Borodino and Stalingrad, his work charted conflicts of the second half of the 20th Century, including the war in Vietnam and Soviet involvement in Afghanistan. 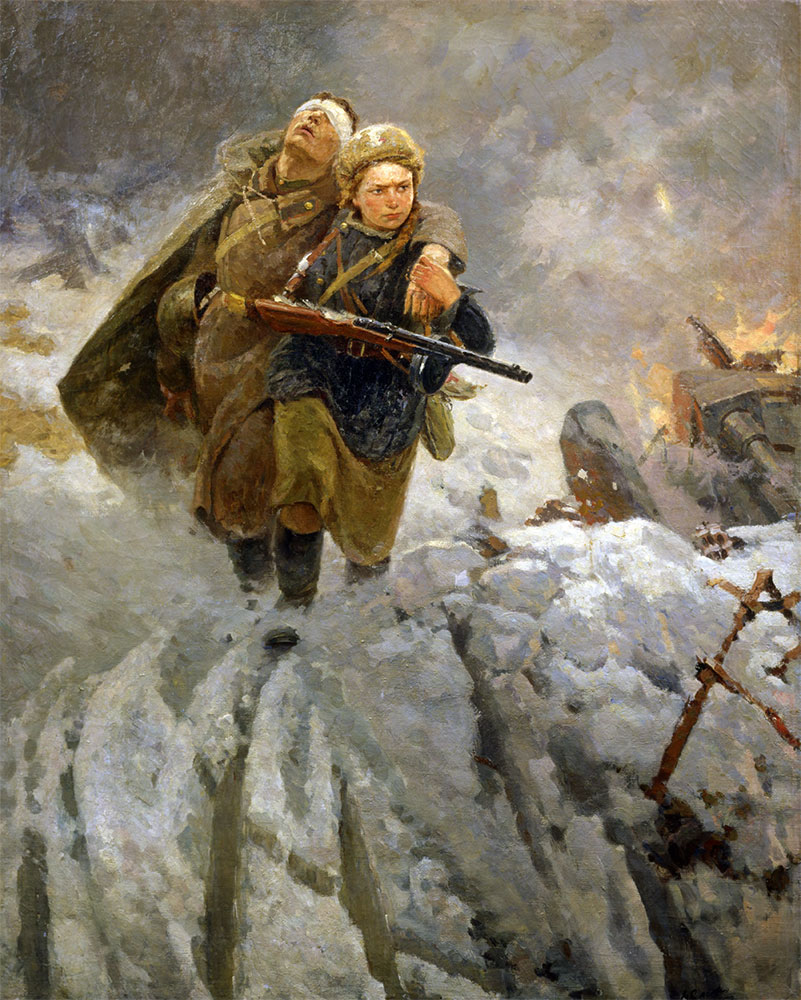 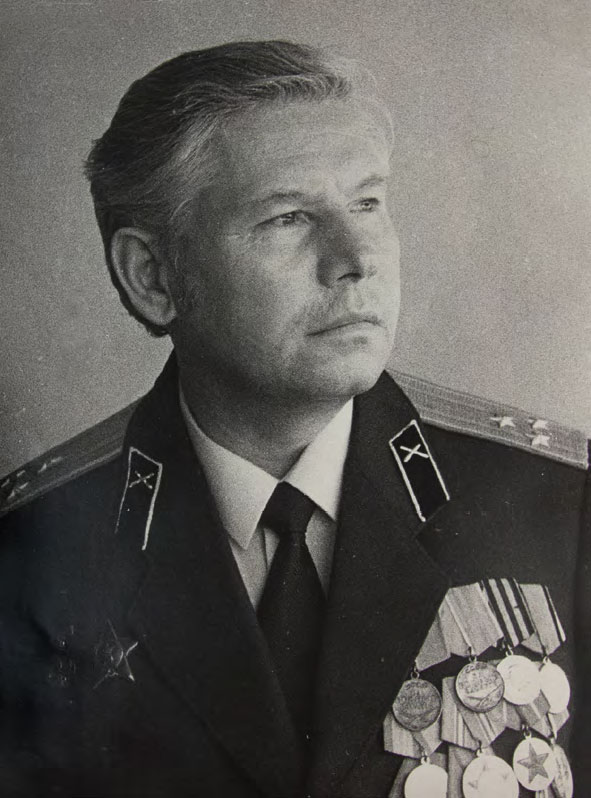 Samsonov recalled his earliest efforts to become an art student: “The siege of Leningrad had just ended. I arrived at the railway station with my mother and younger brother Zhenka. Somehow we managed to take advantage of the commotion and get away from mama, finding our way to Vasilievsky Ostrov: we knew that was where the Academy of Arts was located. When we found it at last, we knocked with the heavy iron ring on its door, one that seemed hopelessly closed. Finally the caretaker appeared: ‘What d'you want, boys?' ‘We've come to enrol, to study!' ‘Study, eh?... Come back when the war's over then!' he said, closing the door that we had so much wanted to enter."

At the age of 20, and already with the rank of lieutenant, Samsonov took part in the Victory Parade that marked the end of the Great Patriotic War as part of a consolidated regiment of military cadets. “I had the chance to take part in the Victory Parade on Red Square on June 24 1945," he would later remember. “That day, so bright, so unforgettable will remain in my memory forever. You can't begin to sum it up in just a few words.

The suffering, the hardships that we had confronted, life and death - everything became somehow connected in your mind during the endless years of war. But the most important thing was that this Victory Day had come, this ‘celebration with tears in her eyes', as the popular song goes, was there on our street. We cadets, marching shoulder to shoulder in victory, were thinking of our fathers, of how we were there now in their stead, we were there for those not destined to survive to see the liberation of Moscow, that city so dear to them, nor to march in this parade."

But soon the door to art would indeed open for him, and Samsonov entered the professional art community. A year later, in 1946, he would join the famous Grekov Studio of War Artists, which had announced a competition to recruit new painters: Samsonov sent in his documents and pictures, which impressed the organization's artistic director Nikolai Zhukov. But Samsonov could hardly have dreamed that he would be successful, or that he would be transferred to Moscow from the remote Urals garrison where he was serving after finishing the Military College of Army Engineers in Kalinin (Tver). Zhukov, however, was determined, persuading the army to transfer Samsonov to Moscow and provide him with accommodation there in a dormitory. The studio became for Samsonov the academy where he would learn both his craft and the lessons of life, as well as his home where his talent would blossom. His keenly inquisitive mind and sensitive soul absorbed all that was good in encounters with and lessons taught by the older generation of the Grekov artists, including such grandees as Pyotr Krivonogov, Konstantin Kitaika, Anatoly Kokorin, Vladimir Bogatkin and Leonid Golovanov. As Samsonov put it, “As I stood behind them, I was learning my craft." What is remarkable is that his compositions, even the earliest ones, never looked like the work of a student: instead, they caught the public's attention almost immediately. As the war receded in time, his works became richer in their conception and execution. One of his first compositions to win acclaim was “Sister of Mercy", which like his “Sasha Chekalin" was distinguished by its craftsmanship and originality of style. 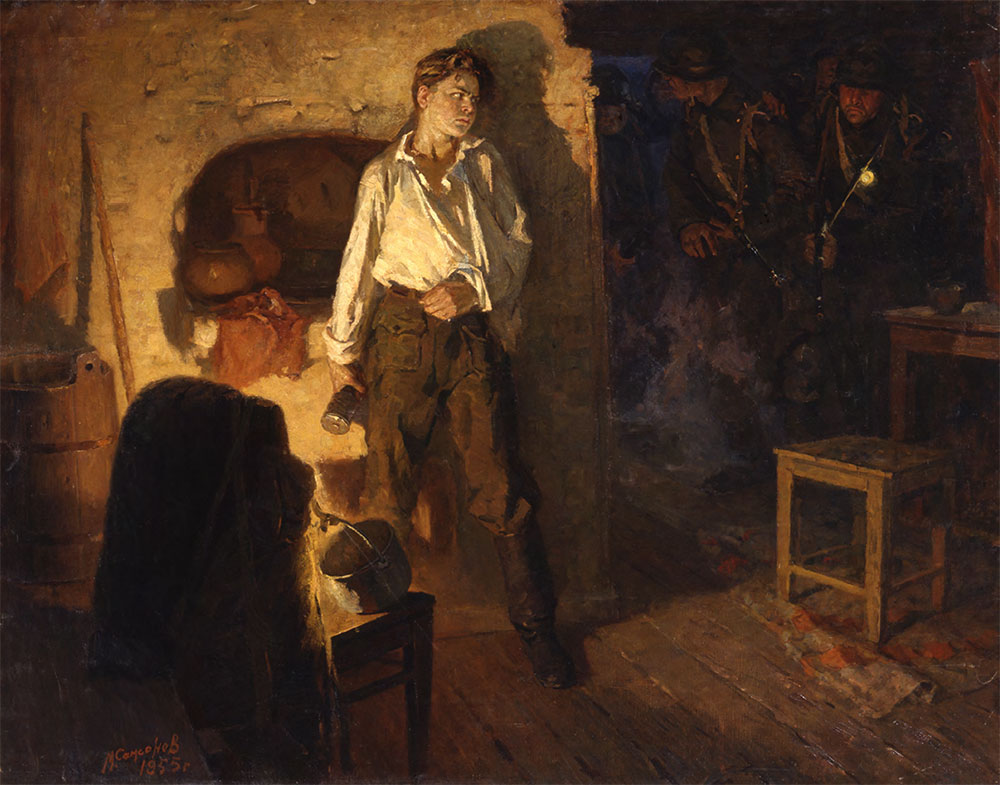 A special theme in Samsonov's work has been women in war. He created a whole series of images titled “Russian Women", the first of which, “Year 1941", had a stunning impact. Painted on monochrome cardboard, it was first exhibited as a study for a large composition. But its moral message made it a truly epic work, a quality felt in all of the artist's compositions devoted to women in war. Always the real “Russian Madonna", she is the “Sister of Mercy" who carries the wounded from the field of battle, the mother carrying her child through the flames of hardship in “Paths of War" and “Fighting for the Fatherland". In Samsonov's compositions the female image is the image of the Motherland - always graceful, pure and without reproach. 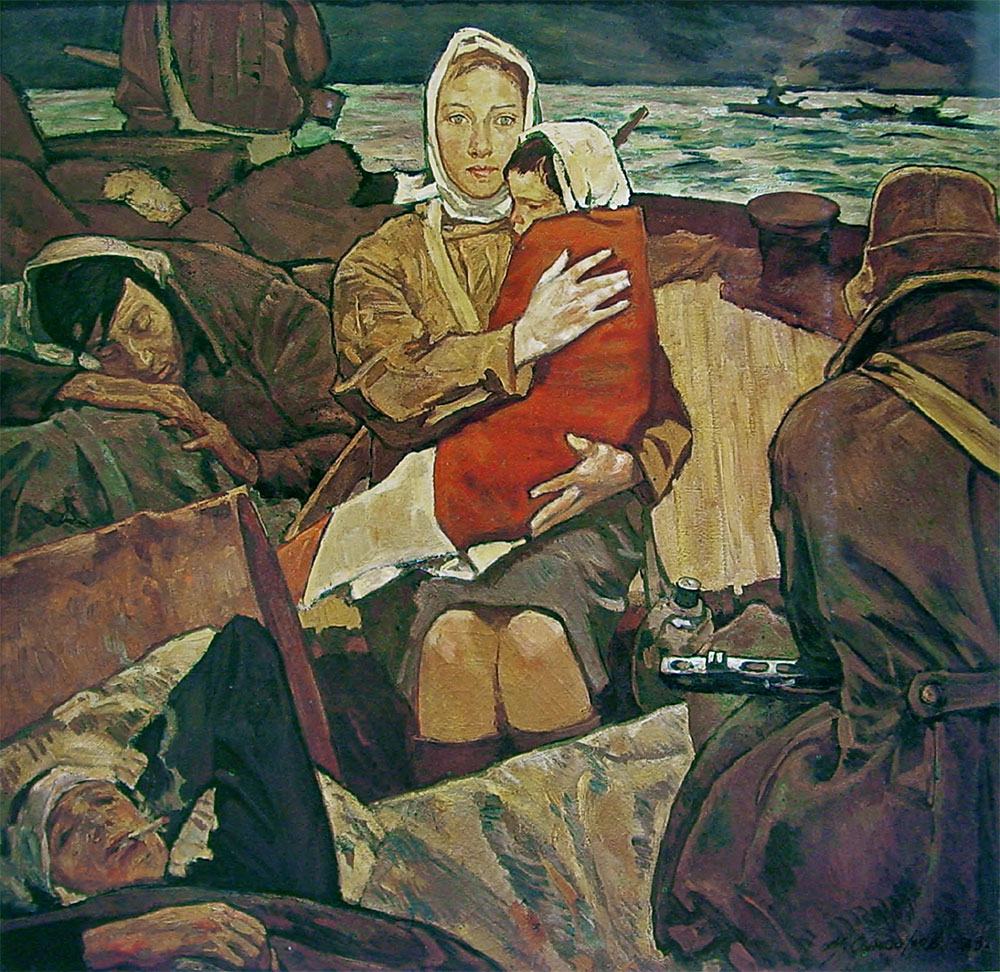 Nikolai Zhukov once presented the young Samsonov with his book, with the inscription, “May art always be the main treasure of your soul!", words that would become the artist's life motto. Samsonov's artwork was never limited within the narrow confines of any particular stylistic trend: never restricting itself to realism, it could also feature symbols and metaphors, which greatly enriched the artist's visual language. Given his inner freedom, Samsonov was able to adapt his artistic vocabulary quite easily: thus he had no difficulty leaving behind his “smooth" style of the 1950s to develop a visual idiom with an element of drama in the decades that followed.

The 1960s and 1970s were the period when the artist's creative abilities were at their peak. He twice visited Vietnam, during the years of the war with America, returning from there with powerful, visually compelling compositions, first drawings, then several series of linocuts and, finally, finished compositions with a rich philosophical dimension. It would not be an exaggeration to say that Samsonov's Vietnamese series not only reflect the high point of his talent but are also a landmark of Soviet culture of the century.

It was in those years that the artist worked on creating panoramas, paintings around 360 degrees, and diorama models in three dimensions, of historical sites and events for museums. He was part of the team that restored Franz (Franpois) Roubaud's famous Battle of Borodino panorama and later took part in creating the first Soviet-themed panorama, “The Battle of Stalingrad". He created several dioramas focused on the historical victories of the Russian Imperial army, as well as episodes from the Civil War and the Great Patriotic War. He systemically studied and adopted the Russian traditions of such works, passed down from Roubaud and Mitrofan Grekov and in turned handed on to artists of the younger generation. Samsonov never stopped developing as an artist, and even when his reputation was secure would always generously share his knowledge with others, whether with his colleagues at the Grekov Studio or with children at painting classes.

Samsonov was a war artist in the truest sense. His “Afghan Sketches" deserve special attention, the product of two very challenging journeys to Afghanistan in the 1980s: his exposure to that conflict, following the Soviet Union's intervention there at the end of 1979, brought on a reflective mood in the artist. It was then that Samsonov first published socio-political commentary, in the form of his outstandingly written “Afghan Journals" that accompanied the exhibitions of his artwork that were staged in Moscow.

Samsonov headed the Grekov Studio of War Artists for 15 years and became one of the country's most beloved and respected painters. Reflecting on his art late in life, he summed up his credo: “Now as one century ends and another begins, in the field of art new views and tastes prevail and gain currency, and artists capture new aspects of life, new images. But this does not at all mean that our history - the history of Russia - should be swept from our memory. Quite the opposite, I think: we become richer when we remember and learn about the lives and struggles of our ancestors. This is what I try to convey in my paintings." 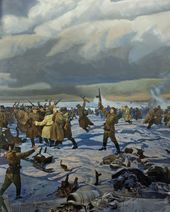 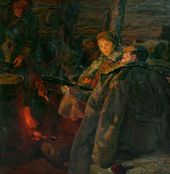 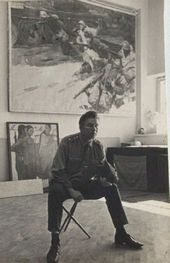 Marat Samsonov in his studio at the Grekov Studio of War Artists. 1970
Photograph

The Council of Arts discussing the “Sapun Assault” diorama (by Pyotr Maltsev, Georgy Marchenko, and Nikolai Prisekin) in Sevastopol. Colonel Georgy Timoshin, centre, Marat Samsonov to the right above him. November 1959
Photograph

Marat Samsonov working on his sculpture of Nikolai Zhukov, People’s Artist of the USSR, Artistic Director of the Grekov Studio of War Artists
Photograph 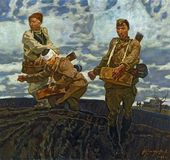 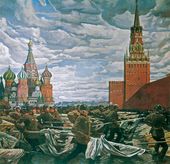