The events of the Spanish Civil War horrified the world, and supporters of the Spanish people and the democratically elected Republican government united to oppose reactionary fascism.

On April 26 1937, the Condor legion, a unit of the German Luftwaffe assigned for special duty with General Franco’s Nationalist forces, attacked and destroyed Guernica, a town of 6,000 people. In its terrible fate, Guernica became a symbol for the whole world, a forerunner of the destruction of the cities of World War II - Coventry, Stalingrad and Dresden...

The Spanish Civil War was covered by Soviet war correspondents, among them Ilya Ehrenburg, Mikhail Koltsov (“The Spanish Diary”), and the remarkable front-line cameraman Roman Carmen; by the Americans Ernest Hemingway (“For Whom the Bell Tolls”) and John Dos Passos; by France’s Antoine de Saint-Exupery (whose 1937 “L'Espagne ensanglantée” collected his writings from the newspaper “L'Intransigeant”) and André Malraux; while Pablo Neruda, the Chilean consul in Madrid in 1936, wrote his poetic cycle “España en el corazón” (Spain in Our Hearts).

A number of poets and writers fought with the International Brigades on the Republican side, including Britain’s George Orwell (“In Memory of Catalonia”) and Stephen Spender, John Cornford and Julian Bell, both of whom perished in the conflict, alongside Spanish poets such as Miguel Hernandez, Vicente Aleixandre y Merlo and Cesar Munoz Arconada (who ended his life in exile in Moscow). The great Spanish poet of the 20th century, Federico Garcia Lorca, had been killed by Franco’s forces in 1936, before the outbreak of the Civil War.

The Soviet Union launched a mass campaign to collect funds to help the Spanish Republic, delivering wheat, canned food and sugar to Spain, as well as arms, aircraft and fuel.

Soviet pilots gained combat experience in their air battles with German airmen: in total, 59 Soviet citizens were awarded the order “Hero of the Soviet Union” for their service in Spain.

In 1937-1938, more than 34,000 children from Republican families were evacuated from Spain to France, Britain, Belgium and the Soviet Union. The world of culture responded powerfully to the Spanish Civil War, most notably in Pablo Picasso’s “Guernica”. Enormous in scale, harsh as a curse, sharp as a sword, loud as the wordless cry of a mother who has lost her child, bitter as death, “Guernica” become a symbol of the struggle against the evil of fascism.

RAFAEL ALBERTI
I belong to the Fifth Regiment!

JOHN CORNFORD
From “Full Moon at Tierz:
Before the Storming of Huesca"

Where, in the fields by Huesca, the full moon
Throws shadows clear as daylight’s, soon
The innocence of this quiet plain
Will fade in sweat and blood, in pain,
As our decisive hold is lost or won.
All round, the barren hills of Aragon
Announce our testing has begun.

from every house burning metal flows
instead of flowers,
from every socket of Spain
Spain emerges
and from every dead child a rifle with eyes,
and from every crime bullets are born
which will one day find
the bull's eye of your hearts.

And you will ask: why doesn’t his poetry
speak of dreams and leaves
and the great volcanoes of his native land? 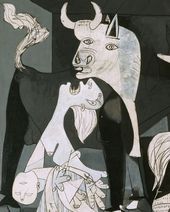 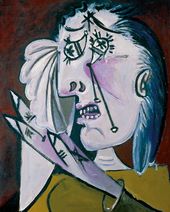