Filipp Rukavishnikov: I AM NOT HURRYING ANYWHERE

“In the Solemn Nowhere
We were prescribed different outlines,
Another's truth...”

A darling of fortune, one who undeniably drew a “lucky number” in life, and who, it appears, is well ahead of his time, Filipp Rukavishnikov also inherited a heavy burden of fame: a kind of counterweight to complement the dynastic load shouldered by everyone born into the family. 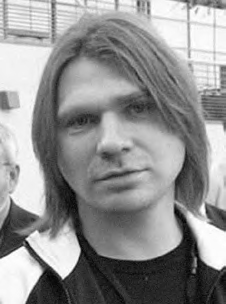 He stood out among his school contemporaries for his extraordinary versatile talents and erudition - and also, as often the case, for his freedom-loving, independent nature. This offspring of the illustrious Russian artistic dynasty recalls his childhood and youth only with sarcasm, which his current entourage refuses to see as genuine or, at best, looks upon as an utterly unjustified posturing. However, such scepticism about, such lack of understanding of Rukavishnikov’s personal ambitions simply hides his personal, deeply held idea of the creative freedom of an unshackled spirit. The destiny awaiting him was felicitous and difficult: not to rest on his progenitors’ laurels. From an early age, Filipp looked like a veritable wunderkind - thanks to his innate talents, his family situation, the secret hopes of his relatives and, to some degree, to the attention that the public paid to him. The gifted boy was unexpectedly offered a role in the film “Mary Poppins’’, in which he played Michael Banks, which brought him huge popularity. Meanwhile, his grandfather, lulian Rukavishnikov, his grandmother Angelina Filippova, and his father Alexander - all artists with a God-given talent, as well as his mother, Olga, a ballerina - all of this family, although taking the child’s success for granted, hoped for a different future for him. To put it simply, he was to become the heir and successor to this clan of sculptors. 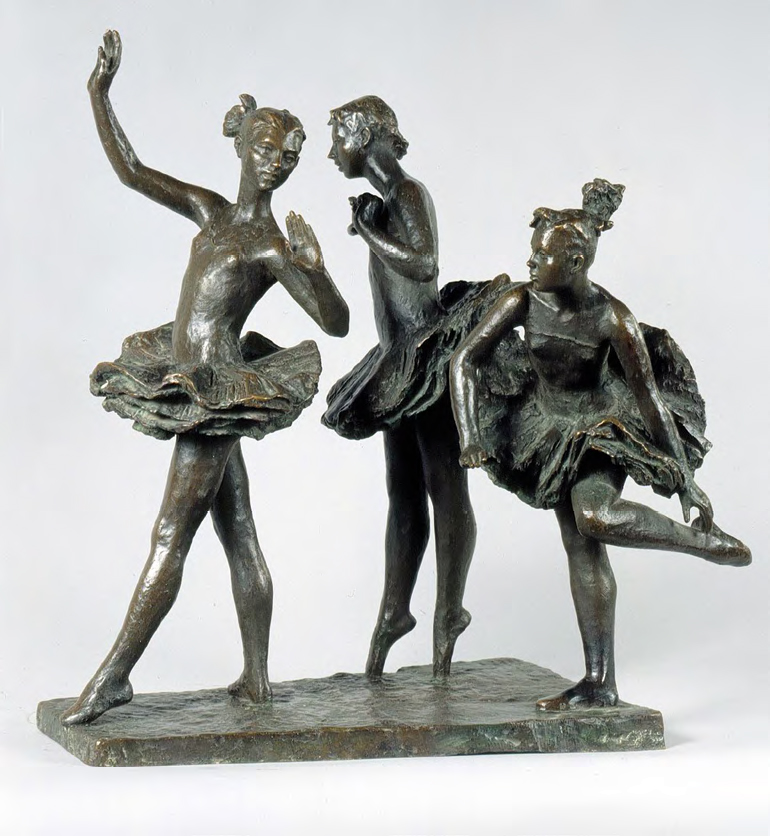 Filipp was being prepared for the life of a sculptor. Obeying his family’s wishes, he graduated from the Surikov Art Institute and became an artist with a diploma under his belt. The range of his creative interests, meanwhile, has always been wider than his dynastic mission. But then again, one force at play here was his genetic predisposition to literature - in particular, to poetry: among his most distinguished forebears was the wonderful poet Ivan Rukavishnikov, and even Vladimir Nabokov was a distant relative of the Rukavishnikov family. Apparently, such circumstances played a special role in Filipp’s life: it was thanks to, and partly in defiance of the family “title" of artist that he inherited his inimitable literary talent, too.

His beginning in film, despite its unusual and memorable start, was not enough to satisfy his selfesteem, although that same branch of career would continue on television, where Filipp hosted his own programme “Art Zone" on the “Kultura" (Culture) channel. Although such long periods of creative activity in public were not something he relished, the fame and status it brought secured for him an opportunity to carry out new projects connected to his own experience.

At the same time, he was painstakingly and productively realizing his potential and applying his professional skills to create a series of serious, noteworthy and remarkable sculptures, paintings and drawings. His most significant works include the monumental decorative fountain titled “Inspiration", sited near the Tretyakov Gallery. In designing it, Rukavishnikov may have had in mind the Louvre Pyramid, which, together with the Centre Georges Pompidou, has become one of the most recognizable architectural symbols of Paris today. The outlines of the fountain, which is made of gilded frames, resemble a truncated pyramid; although for anyone at all familiar with the artist, it come as no surprise that these decorative functions carry a certain message as well.

He has created a range of statues with remarkable imagery that fit well into Moscow's cityscape. These works include several monumental images of legendary Russian sporting figures, those worshipped by huge armies of football fans. He also designed memorial plaques, including the much talked-about one at 26 Kutuzovsky Prospect, the house where Leonid Brezhnev lived for many years (it replaced the one that was long ago sold to Germany). Although most such projects were commissioned by public bodies, the greater part of the young artist's works convey the power of his mighty imagination, as well as his subliminal, intuitive inclination to heed the guidance of his unique sensory experience, his own ontology of being.

This mercurial and quickly changing sense of the diversity of the world lends a special visual argument to Rukavishnikov's artwork. His non-figurative drawings and paintings feature what appear to be the same lines and forms reproduced countless times - a repetitiveness that displays not just emotional impulses but an irresistible desire to overcome the recurrent, stereotypical idea of the universe, the nature of being. Whether you like it or not, you cannot but notice a hard-to-explain, somewhat virtual connection between his visual experimentation and his writing, the latter suggesting the author's engagement with Alexei Kruchenykh's theory of the “shiftology [sdvigologia] of Russian verse", the French philosopher Jacques Derrida's principle of deconstruction, and the teaching of the German philosopher Martin Heidegger.

According to all evidence, the structure of pictorial/ visual vocabulary in Rukavishnikov's artwork derives, in one way or another, from his linguistic explorations and discoveries. Thus, there has been continuing interest in how the artist radically re-considers the classic legacy, the realist traditions of art, and his own role in contemporary culture. Rukavishnikov's indirect engagement with postmodernism and, in particular, post-structuralism is undoubtedly related to his inner resistance to the obvious gravitational force of the dynastic calling, with his own self, his unique identity, one which never borrows anything from anywhere, reasserting itself.

Rukavishnikov's best pieces from that period include a fairly surprising series of decorative teapots. They become objects with a specific function to which the artist lends a wide array of connotative meanings, akin to the field of contexts that influence the feelings of viewers of such externally similar objects, like Giorgio Morandi's still-lifes, which are what might be called “self-portraits" of the Italian artist's emotional states and thoughts. Their wonderfully lively and impressive shapes lend the teapots certain visual characteristics - as if the teapot itself is a portrait, with dimensional and spatial features identical to traditional small-scale sculpture.

The rapid, spiral-like evolution of Filipp Rukavishnikov's creative thinking logically took him to “ground zero": as he sees it, that is Dadaism with its programmatic irrationalism and so-called anti-aestheticism. This movement, even phenomenon in the art and literature of the first quarter of the 20th century was pioneered by Marcel Duchamp, Francis Picabia, Hans Arp, Max Ernst, Tristan Tzara and Andre Breton. The combination of letters “d-a-d-a" is like childish babble turned into a special form of spiritual protest and provocation, a gesture of epatage that challenges the petty bourgeois mind and any banal approach to reality. So it was Dadaism that proved to be the best nourishing environment, one in many respects suited to the artist's worldview, philosophical mentality and creative imagination. This is not at all to say that Rukavishnikov directly borrows from others or repeats what has been done before - rather, it is an appropriate literary and poetic instrument of his creative self-expression.

Using dadaist techniques, the creator is fully at ease and free in his choice - he contends against unprincipled opportunism, hypocrisy and other flaws of modern civilization. He passionately writes texts that seem senseless, absurd or simply inaccessible to some readers: they are built around a play on words and sounds which are fused, at the level of instinctive, subliminal associations, into images that are both alogical and stunning for the ordinary mind. The Dadaist artist works with letters, syllables and words in defiance of the rules of morphology, restructuring them into new meanings of rhymed combinations of words. Not infrequently different kinds of linguistically marked, and sometimes downright bawdy writings are introduced into the visual fabric of paintings which have some resemblance to what we know as naive art, or an intuitive paraphrase of fauvist artwork. As if playing with a Rubik's Cube, Rukavishnikov selects letters of the alphabet almost at random, composing words that nobody yet knows, but which reflect innermost feelings, emotions and thoughts. He thus proves with his own deeds the correctness of the principles of psychoanalysis, as well as the lasting significance of Wassily Kandinsky's maxim that “that which is not born from the inside is stillborn".

In recent years the artist has been working extensively, in both drawing and painting, with so-called “posters", in which the intuitive-subliminal layer is released in surrealist imagery. Highly emotional viewers find in his phantasmagorias a variety of surprising associations with the works of Sigmund Freud and Friedrich Nietzsche, as well as the creative vocabulary and aesthetics of Kafka or Bulgakov. In Rukavishnikov's new works his personal experience provides an unconditional impulse for re-considering literary experiments and fantastic images, and converting them into a visual format. The posters preferred by the artist have been created mostly with a mixture of techniques, which in itself signals the dualist philosophical-metaphysical nature of his creative existential realities.

Mentally recalling the past while at the same time analyzing the present, Filipp Rukavishnikov, with his inexhaustible artistry, finally has come to feel that he has acquired his own self, a personal identity unrestrained by anybody and anything. He has much time ahead of him - which is why he is no longer hurrying anywhere: “There is a commemorative date/Of this life that seeks to escape mortality..."

Despite his personal ambitions, the idealism of youth, and the vicissitudes of fortune that befell him, Filipp Rukavishnikov has always been, and remains today a worthy offspring of his family line. 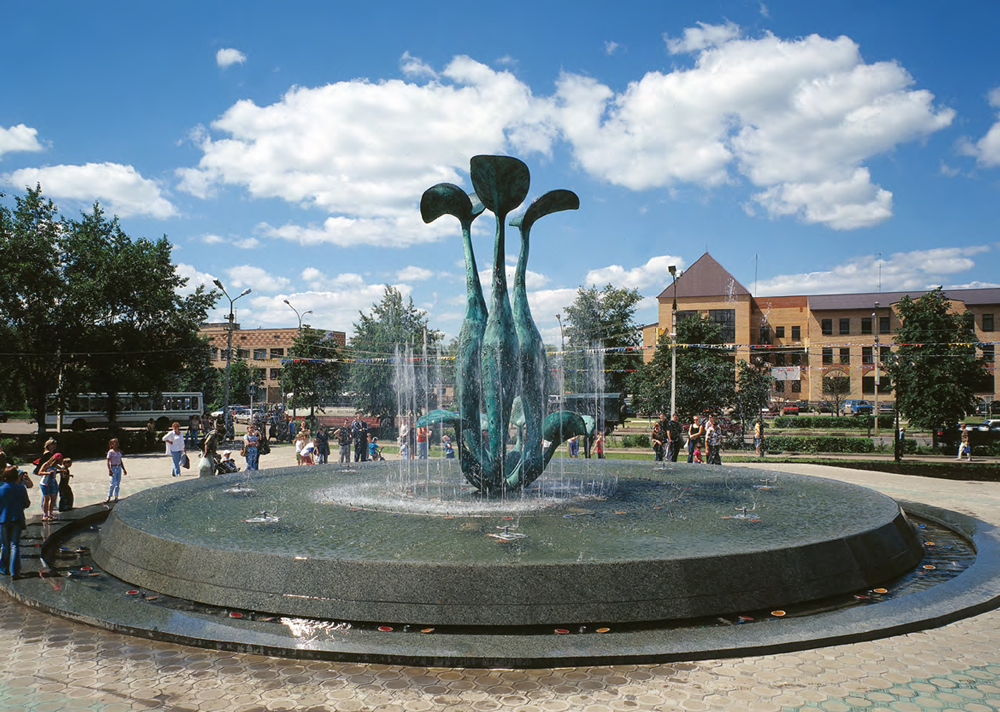 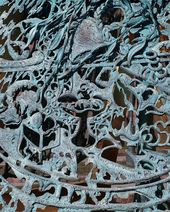 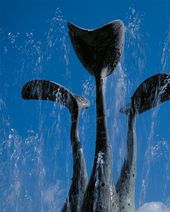 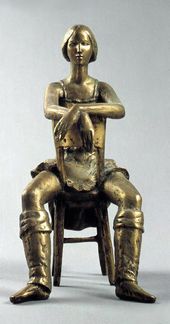 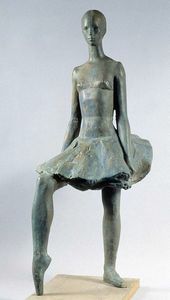 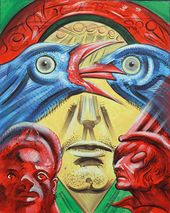 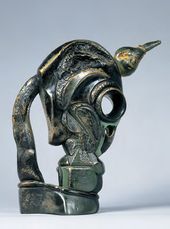 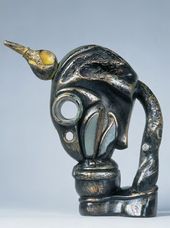 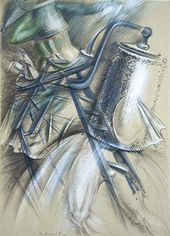