The Mansion of Serge Koussevitzky. The Story Behind a Commission

NATALIA GONCHAROVA IS ONE OF THOSE RARE PAINTERS WITH A PRONOUNCED TOUCH FOR THE MONUMENTAL FORM. IN HER RUSSIAN YEARS IT MANIFESTED ITSELF IN RELIGIOUS PAINTINGS THAT WERE FAR FROM "ORTHODOX" - AT LEAST BY COMPARISON WITH CONTEMPORARY ECCLESIASTICAL ART AS REPRESENTED BY TH E LI KES OF VIKTOR VASNETSOV AN D MIKHAIL NESTEROV - A FACTOR THAT EFFECTIVELY BLOCKED ANY POSSIBILITY OF HER RECEIVING OFFICIAL COMMISSIONS. IT WAS ONLY IN 1915 AFTER HER DEPARTURE FROM RUSSIA, THAT WITH THE HELP OF THE ARCHITECT ALEXEI SHCHUSEV THE ARTIST WAS COMMISSIONED TO DECORATE A PRIVATE CHURCH ON AN ESTATE IN BESSARABIA. EVEN THAT WORK WAS DOOMED NEVER TO BE COMPLETED, BECAUSE OF THE WAR AND REVOLUTION.

Success awaited Goncharova in France, and, strangely enough, this commission for monumental work came as a result of Goncharova's stage designs. In 1913 Alexandre Benois was looking ahead when he enquired after, "... the theatres that have to have their sanctuaries decorated by her."1 One such "theatre" materialized in the form of the famous Ballets Russes. Goncharova was welcomed through Sergei Diaghilev into his circle of composers and musicians, among whom was the well-known double-bass player and conductor Serge Koussevitzky. They could have met earlier, in Russia: Serge and Natalie Koussevitzsky paid attention to contemporary art and attended events organized by the Free Aesthetics Society,2 where Goncharova had a one-day solo exhibition on March 24 1910.

In Paris their paths would overlap again. An 1918-1919 exhibition in Paris of Goncharova and Larionov's stage designs proved a success3. And in 1920, according to one of Goncharova's subsequent letters4, she earned a fee for working on the interiors of Serge Koussevitzky's newly acquired home at 8, rue du Conseiller Collignon: the money was probably an advance payment while the work was still in progress. In a 1924 list of assignments there is mention of the Koussevitzky mansion: "A room in the house of Koussevitzky, who is away on an eight-month tour of the USA. Goncharova adorned it with still-life paintings, a large panel painting and designed all the furniture."5 One of the design sketches for the house furniture is in the Tretyakov Gallery archives, while a photograph of the dining room showing some items from the set and the large panel painting "Spanish Women" survived in the Larionov-Goncharova archive. That unique panel has been exhibited for the first time in Russia at the Tretyakov Gallery's current show, "Natalia Goncharova. East and West". It remains unclear which still-life paintings are included on the list - the small decorative compositions "added" occasionally to the furniture designs or the easel paintings on the walls of the dining room. Neither are to be seen in the photograph.

The interior design of the mansion was not finished in 1924, however. In the "New York Herald Tribune" on August 5 1925, Florence Gilliam wrote: "Goncharova is busy decorating a new Parisian residence for Koussevitzky."6 There is similar evidence in a letter of May 9 1926 sent by the furniture and upholstery specialists to Larionov, who was overseeing the work on the house:

I am going to be at Koussevitzky's tomorrow by 2:30 in the afternoon accompanied by the upholsterer and joiner aiming to get everything done in the evening.

Along with the panel for the dining room, Goncharova painted panels for the entrance hall using designs from the ballets "Le Soleil de Nuit" ("Lel", "Snowmaiden", the figures of the Four Seasons - "Winter", "Spring", "Autumn" and "Summer") and "Le Coq d'Or" ("City", "Prince Guidon", "Commander Polkan", "Astrologer", "The Queen of Shemakhan"). One of those panels ("Astrologer") was reproduced in the "Russia and Slavdom" newspaper of November 15 1929. The work would therefore have been carried out between 1920 and 1929. Initial sketches and drawings for the Koussevitzky mansion found in the Tretyakov Gallery graphics collection and private collections in Russia and abroad facilitate an understanding of the general idea of Goncharova's plan, and allow us to follow the work involved in making the decorative panels.

The initial charcoal sketches of the entrance hall panels belong to London's Ravenscourt Gallery: their expressiveness is close to that of the sketches of the artist's famous screens "Spanish Women", accomplished using the same charcoal technique and on a similar kind of paper, which suggests they were possibly accomplished in the mid-1920s. Other designs - "Prince Guidon", "Commander Polkan", "Astrologer", "The Queen of Shemakhan" (charcoal on paper, 77 x 39 cm) - were reproduced in the New York Museum of Modern Art exhibition catalogue.8 The coloured gouache depictions of the Prince Guidon and Commander Polkan panels came to the Tretyakov Gallery exhibition from the collection of E. Kurnan. Finally, there is a full-size drawing of a nude on tracing paper for the "Summer" section of the panel painting from the collection of B. and M. Molchanov. The entrance hall panel paintings, acquired from the Tobin Collection9, are now in the McNay Museum in Texas. Photographs of all the panels survived in the artist's archive. Taken together, these materials reveal much about the different stages of Goncharova's work on the decoration of Koussevitzky's house.

After completing the charcoal sketches Goncharova painted them in colour to decide on the colour patterns of the future panel paintings. To keep the proportions she then transferred the full-sized figures onto canvas using tracing paper (she had used the same method when working on the "Spanish Women" panel painting) and painted them, with landscape or architectural backgrounds, in oil.

Her efforts, however, appeared to have been in vain: having been made the conductor of the Boston Philharmonic Orchestra in 1923, Koussevitzky visited Paris only rarely, spending most of his time in the United States. Goncharova even wondered whether the mansion had been sold already. In 1935 she wrote to Larionov: "Here's another idea - provided the exhibition also comes to Paris - maybe we can showcase the things I made for Koussevitzky. Perhaps some of them - 'Lel' or 'Snowmaiden' from the 'Four Seasons' - or maybe the 'Astrologer' and three others - think about it as they are something no one possibly sees now and are in unknown possession. I'm not sure who the mansion belongs to. But as I have told you, the Spanish panel he keeps in Medon (probably) folded or hanging - hard to tell. I don't actually think these things are safe. So it would perhaps be good to bring them out (do consider this and we shall talk to Okunev)."10

In 1957 Olga Koussevitzky, the widow of the conductor, was selling the mansion and sought advice from Goncharova as to what price to attach to the panel.

Dearest Natalia Sergeevna, I'm writing with regard to your 'panneaux' in the entree of the Koussevitzky house in Paris (8, rue du Conseiller Collignon). I have to sell the mansion and I am asking my attorney M. Connor-Ammerman to discuss with you the value of the 'panneaux' you made. I would be most grateful for your advice and help in this matter. I am sure you would be interested to know that the large panel depicting the Spanish women among the bloom of magnolias has been shipped to New York where it attracted the attention of the directors of the Art Institute of Chicago. If I manage to be in Paris this autumn I hope to come and see you. Sending my best regards to you and your husband. Yours sincerely, Olga Koussevitzky"11

In his reply Larionov (on behalf of Natalia Goncharova) once again lists all the items made for the mansion.

From: Mikhail Larionov To: Olga Koussevitzky

Nat. Sergeevna Goncharova is suffering from rheumatism in her hands so she asked me to write to you about her panels in the entree of Sergei Alexand[rovich's] house in Paris. Sergei Alexandrovich paid her for those panels 1,000 fr each in 1920 and 2,000 fr for the largest one. The 'Spanish Women' panel was paid for as an addition to the furniture and the payment was calculated also at 1,000 fr as of 1920 (which in current money will be 100,000 fr or 150, 000 fr). The panel consists of two sections. But the architect Fidler did not account for enough space on the side wall. And since Sergei Prokofiev liked one of the sections very much Natalia Sergeevna sold it to him for 1,000 fr and he took those 'Spanish Women' with him back to Moscow where they remain until now. You can take this price into account when negotiating the purchase of the panel belonging to Serg.[ei] Alex.[androvich] Koussevitzky, the famous Chef d'orchestre, by the Art Institute of Chicago where his memory would be best kept. Even if someone offers you a better price, stay with the Chicago Institute. If you come to Paris, N.S. Goncharova and I will be delighted to receive you in our home. Yours sincerely and respectfully, M. Larionov."12

The letter makes it clear that there was another part of the panel "Spanish Women " which did not fit onto the wall due to the architect's miscalculation, and was later sold to Sergei Prokofiev. In a Moscow collection (former Semenov's) there is a painting "Spanish Woman" which, according to its provenance, originates from the collection of S.S. Prokofiev13 - it could be the last missing work made for the mansion. One cannot be absolutely certain as the letter states that it was the painting "Spanish Women", in the plural, not "Spanish Woman" that was taken to Moscow by Prokofiev. As with all such attempts at reconstruction, this story of the commission for the Koussevitzky mansion still leaves some questions unanswered. 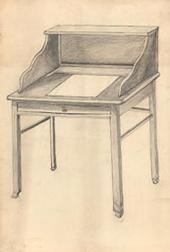 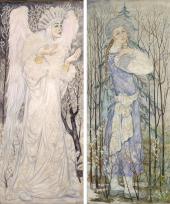 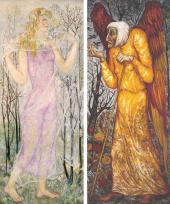 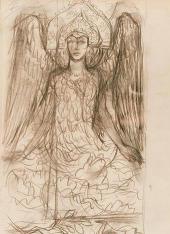 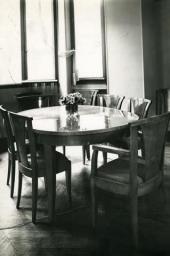