On 9 March 2012 Viktor Popkov, who died tragically early in November 1974, would have marked his 80th birthday. A graduate of the Surikov Art Institute, Popkov became one of the brightest and most remarkable artists of his generation, and his name and work has a permanent place in the history of the fine arts of the mid- to late-20th century.

The works he created — "A Couple", "The Builders of Bratsk", "September on the Mezen", "My Day", and the series of paintings, "Mezen Widows", "Work is Over", "Father's Greatcoat", and "Autumn Rains. Pushkin" — would become the centre of public attention immediately after they were exhibited, attracting eager feedback from art critics and being fervently discussed and admired by the artist's colleagues and friends. The most influential art critics of his time — Alexander Kamensky, Lydia Akimova, Alexander Morozov, Vitaly Manin, Grigory Anissimov and many others, whose opinions defined to a considerable extent the destiny of an artist and his/her works — would always write about him.

Almost 30 years after Popkov's death, our interest in his artistic heritage has not subsided. His oeuvre has been examined and analysed from the points of view of different social and cultural contexts and traditions, most often drawing parallels with the works of the "village prose" writers Fyodor Abramov, Vasily Belov, Valentin Rasputin and Vasily Shukshin, and somehow passing over such phenomena of Russian culture as the prose of Vasily Aksenov or the films of Andrei Tarkovsky, where a philosophical and moral perception of time proved larger than the boundaries of purely national ideas and shared emotions, acquiring a universal significance.

Being Russian by birth, spirit and destiny, Popkov managed — probably without being aware of it himself — to reach a level of great supranational artistic generalizations that he made on purely Russian material, based on his own experience and knowledge of his people's lives. That is probably why the artist's works remain up-to-date, being permanently replenished, as though from within, with new graphic and content-rich nuances and dramatic meanings.

Many researchers have noted that Popkov's art is profoundly linked to old Russian icon painting, to the imagery of Dionisy, and the traditions of the "Jack of Diamonds" group, to what spiritually illuminated and morally inspired a whole group of brilliant artists of the 1960s. At the same time, critics have hardly noticed that his works were in tune with the great works of the old European masters, in particular, with the mannerists such as El Greco. However, a closer look at Popkov's paintings confirms that kind of affinity, not only in formal technique and certain stylistics but also in their inner expressiveness and exaltation manifested in the special elongated shapes of their characters, flaming aurora of colours and understanding of compositional space.

These parallels are the most obvious in the self-portrait "Father's Greatcoat", where, behind the artist, who seems to be taking on the burden of his generation's moral responsibility towards their ancestors, we see illumined silhouettes of old women, the characters of his series "Mezen Widows". Here, a problem of metaphorical graphic generalization is solved at the highest level of professional culture. These objectives are, first of all, achieved by means of painting, a polyphonic play of colour and light and plasticity of shapes and an unreal space; at the same time, the painting contains an associative narrative, lasting in time and consigned to the background, thus yielding space to the main component — an artistic idea allowing the image's historical bounds to expand. Some people might find such a comparison exaggerated and forced, though quite a few works by the artist provide convincing arguments to support such a version. In my opinion, Popkov's paintings suggest such discoveries, unexpected and recurring, confirming his work's interest and timeless relevance.

Today, people talk and write about the maestro's artistic heritage not from inertia or the formal requirements of his anniversary, but from a genuine interest in its essence. Popkov was a highly versatile artist who worked in different genres with equal success and left us his brilliant landscapes and still-lifes, portraits and multiple character compositions, which, from sheer force of habit, are still being examined in line with set stereotypes; this often means that his unique talent and the humanistic and artistic significance of his works remains underestimated. Common sense notwithstanding, such a tendency does exist in Russian art criticism, which formally brings even the most significant phenomena of our art to a certain conditional isolation from the worldwide artistic process.

Naturally, Popkov, like many other great Russian artists, based his art on real events of his time, felt sympathy for his people, and had a sense of moral responsibility rooted in his motherland's history.

He had the rare gift of seeing things concealed by time. The artist paid great attention to detail and associated objects, which his brush would either turn into some kind of magic signs and symbols or into animate objects. He quite often used cinematographic techniques, giving the viewer a maximum "close-up" of his characters and putting them on the proscenium. Thanks to his various, original methods, he managed to lend his paintings' graphic structure an eloquent expressiveness and inner monumental character. He always gave his works sophisticated artistic "scores", multilayered in their colours, shades and texture, filled with musical paraphase generated by his imagination and revealing themselves in an evocative, delicate way to any sensitive, keen viewer. In his unique way, he managed to render on the space of a canvas a state of anxious-sounding silence and emotional tension, with a high concentration of all-embracing spiritual energy, which is especially felt in Popkov's self-portraits — "My Day", "Work is Over", and "Father's Greatcoat".

Popkov's work shows his graphic and plastic language's emotional virtuosity and meets the highest criteria of artisticity and imagery. His works are polyphonic and multi-associative, containing universal ideas of beauty and spirituality. Each painting by the artist is a philosophical meditation, a confession of the author who, with a religious dedication, exposed the contradictoriness of human existence. In his special way, he understood and intuitively felt an invisible connection between the ages and a continuity of generations and traditions.

Popkov's art is dominated by emotional and psychological intonations which give his paintings their special energy and magnetism. Under the artist's brush, things "of the moment" turn into events with a significant and eternal meaning. The power of such transformation and the artistic means to achieve it define the unique poetics of Popkov's art, placing him among the outstanding artists of the 20th century and allowing us to appreciate his contribution to the artistic culture of the world.

The artist's oeuvre has become Russia's national property and can be found in the collections of the country's best museums and galleries, with his most important works exhibited at the Tretyakov Gallery and the Russian Museum in St. Petersburg. They have also often featured at major group exhibitions in Russia and abroad — in New York and Paris, Tokyo and Berlin, Brussels and Rome.

A recently published monograph on Viktor Popkov, prepared by Peter Kozorezenko, an art critic and artist, and sponsored by Andrey Filatov, a well-known patron of the arts and collector, contains much interesting and new information on the artist and his works. 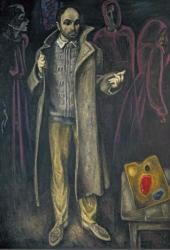 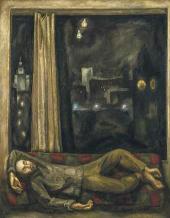 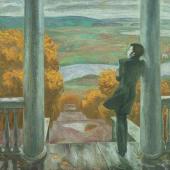 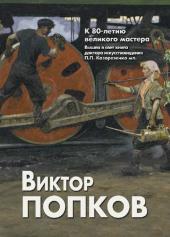 A recently published monograph on Viktor Popkov, prepared by Peter Kozorezenko, an art critic and artist.