THE COLLECTIVE UNCONSCIOUS: The Story of the Emergence of Enigmatic Images of Surrealism

InArtis Project presents in Moscow the graphic works of the notable modern and contemporary Surrealistic artists.

The exhibition “The Collective Unconscious: Graphic Works of Surrealism from de Chirico to Magritte” opened at the beginning of March 2011 at the State Historical Museum of Russia, Moscow. Initiated by InArtis Project, the exhibition gave a rare opportunity to get acquainted with the art works of Giorgio de Chirico, Max Ernst, Salvador Dali and René Magritte from private collections from Europe and the USA, and aimed to show the development of the visual concept of Surrealism - the story of the emergence of the images of Surrealism and their further development as a distinct phenomenon. The graphic works at the exhibition show the viewer not only different works by acknowledged masters that are stylistically different in themselves, but also illustrate the development of Surrealism itself.

The first exhibition of Surrealist artists took place in 1925 in Paris, its participants including painters as diverse as Giorgio de Chirico, Paul Klee, Max Ernst, Joan Miro, and Pablo Picasso. In the opinion of Andre Breton the new art had to express the secret desires and needs of all people; to grasp this art, viewers only had to have a receptive mind and the spontaneity of a child.

The etching “The Mannequin” (“Manichino”) by Giorgio de Chirico reflects one of the main directions of the artist’s work, “proto-Surrealism”, which the artist described as “metaphysical Realism”. Early works by de Chirico contributed significantly to the development of Surrealism as a movement, and the works of artists working in it like Max Ernst and Salvador Dali; Dali considered de Chirico one of his favourite artists.

The search for new directions in artistic form is well illustrated by the famous “Victorian collages” of Max Ernst. In 1934 the lithographs from the artist’s short novel “Une semaine de bonte” (“A Week of Kindness”) were published, becoming one of the more significant cultural phenomena of their time. These lithographs, the subjects of which were developed in collaboration with the poet Paul fluard, won the Surrealists a whole new range of admirers. The exhibition also features Ernst’s work “Shoot the Moon”.

Surrealism fascinated the Chilean architect Roberto Matta, who came to Paris to work under the acclaimed architect Le Corbusier. Matta worked for Le Corbusier for nearly two years, and during that period he became acquainted with Pablo Neruda and Federico Garda Lorca; they introduced him to Salvador Dali and André Breton. Breton, who was greatly impressed with Matta’s pictures, invited him to join the rapidly expanding group of Surrealist artists.

The onset of World War II was a great ordeal for the whole world, and inevitably the fraternity of the Surrealists was affected. Max Ernst was arrested as a subject of an enemy state, but the famous patroness of arts Peggy Guggenheim helped him to relocate to the US in 1941, and he soon married his saviour. But the marriage was not to last long: in 1946 Ernst divorced Guggenheim and married the artist Dorothea Tanning, who was one of the most famous American painters associated with Surrealism. Tanning became the last member of that celebrated constellation of Surrealists who traced their history directly to Breton’s group.

Nevertheless, Surrealism always remained a primarily European movement reflecting the ideas, anxieties and emotions of people living in the Old World; one of the most notable exponents of European Surrealism was the Belgian artist René Magritte. Magritte, who started out as an advertising designer, developed an individual style that agreed well with the visual component of Surrealism but was founded on psychology rather than philosophy. His poetic Surrealism does not deprive material objects of their “materiality”: they are not smudged, nor do they turn into their own shadows.

Magritte used simple and clear images and combined them in a most fanciful fashion, surprising viewers and making them think about the deceptiveness of things seen, and the hidden mysteries behind appearances which we usually fail to notice. Until his untimely death in 1967 Magritte created only 20 graphic works that are officially critically recognized as the artist’s work, 11 of which are presented in Russia for the first time at the current show, as a part of the InArtis project.

Since the late 1960s the Swiss artist Hans Rudolf “Ruedi” Giger has been the main exponent of Surrealist aesthetics. His style, combining representations of human bodies and machines, is often characterized as “biomechanical”. The gloomy ornamentality of Giger’s imagery made him one of the most sought-after artists in the area of mass culture. His credits include numerous sleeves for albums of such bands as Emerson, Lake & Palmer; Celtic Frost; Danzig, and of the singer Debbie Harry, the ex-vocalist of Blondie. However, he became truly famous only in 1977, with the publication of the third work in his “Necronomicon” series. This collection of Giger’s silk prints attracted the attention of the American film director Ridley Scott, who engaged Giger as the designer for his film “Alien”, and the artist designed the memorable image of the xenomorphic monster. This film won Giger an Oscar for Best Visual Effects in 1980. Giger’s works have never been shown in Russia, despite his considerable popularity here, and viewers will have a unique chance to see the artist’s graphic works.

Surrealism became one of the 20th century’s most powerful cultural movements and greatly influenced the development of modern art. It absorbed the strange and in many aspects disturbing energies of the century, a singular age that was marked by two world wars, the Great Depression, astounding scientific discoveries and many other events that turned around people’s ideas about both themselves and the surrounding world. At this exhibition we aim to trace the evolution of Surrealism through the graphic pieces of the greatest Surrealist artists, from a pre-Surrealist painter such as de Chirico to Magritte, Dorothea Tanning and H.R. Giger. This retrospective will afford us the chance to trace the germination of the seeds of the new art which were sown in the fertile soil of the flashy Dadaist absurd, and grew into a unique movement that became one of the landmarks of the last century.

The exhibition “The Collective Unconscious: Graphic Works of Surrealism from de Chirico to Magritte” is organized with the support of Deutsche Bank, SENSEIT and Open Alliance, and runs until April 25 2011. All works presented were assembled from private collections especially for the project. The curators have paid great attention to the design of the exhibition, transforming the grandiose rooms of the former Lenin museum into a Surrealist space through the use of installations and video projections. Right from the entrance visitors will experience the paradoxical fantasy of the early Surrealists, transformed by a contemporary digital consciousness.

In June 2011 the exhibition will transfer to the Loft Project ETAGI (“Floors”) in St. Petersburg, before moving to Perm, Kiev and other cities. 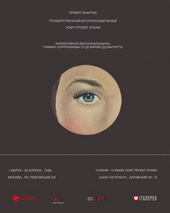 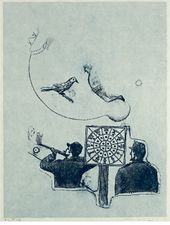 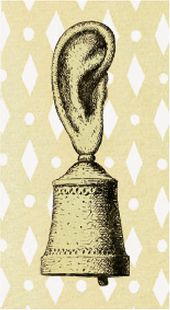 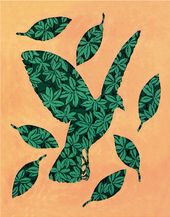 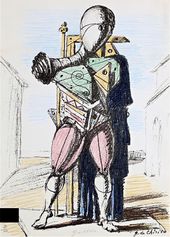 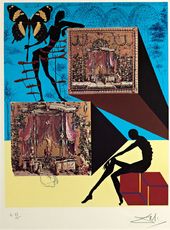