Pyotr Kotov - A Resolute Witness of His Times

Pyotr Ivanovich Kotov (1889-1953), an Honored Art Worker of the RSFSR, full member of the Soviet Academy of Fine Arts, winner of the Stalin prize and a full professor, lived and worked in the late 19th and the first half of the 20th centuries - a time of historical and cultural seachange in Russia. He honestly and earnestly lived his life and became a true witness of his times, his work receiving numerous awards, and his pictures held at the Tretyakov Gallery, the Russian Museum, and many galleries and museums across the former USSR. Historians and art scholars have differing opinions about the turn of the tide that happened in our homeland - but no one has the right to blame the artist for the fact that it befell him to have been born and have worked in so momentous an age.

The artist wrote about himself: “My homeland is the village of Vladimirovka in the Astrakhan province, gracefully seated on a high bank of the Volga River where wide stretches of open space over and along the stream offer themselves to the eye. My father, coming from a family of icon painters, was an icon painter himself, so I spent my childhood in that very specific icon-painting environment... As a result I dreamed of becoming a painter!.. After finishing two classes of a village school in 1903, I became a student at the Kazan art school and, so, my childhood dream began to come true. I spent my last year in Kazan studying under the foremost drawer and outstanding painter Nikolai Ivanovich Feshin, who had just graduated from the Academy of Arts; to this day I consider Feshin my true teacher who initiated me into the mysteries of drawing and painting. In 1909, after graduation from the Kazan art school, with a recommendation to the Academy of Fine Arts in hand, I came to St. Petersburg and tremblingly stepped over the Academy’s threshold, under the inscription that read: ‘To liberal arts’.

“I painted my first sitter when Vasily Savinsky was on duty. That work is associated in my mind with Pavel Petrovich Chistyakov. He no longer taught at the Academy at that time, but sometimes participated in monthly assessments on his own initiative. He enjoyed great respect, so if some piece caught his attention, this was tantamount to a high honour. And during one of his such visits my first sketch of a sitter was singled out by Chistyakov and given a top grade. As early as at the end of the first year I was transferred to the workshops, a very rare occasion in itself, an exception to the rule. After much thinking I decided to enroll at Franz Roubaud’s workshop, which I fancied mostly for the opportunity it offered to study not only humans but also different animals in the open, because the entire workshop building was made of glass...

“In 1914, during the First Imperialist War a group of students from the Academy’s battle-painting workshop, including me, with professor Nikolai Samokish at its head, left for the battlefield to draw and paint. We spent four months there, visiting the Western Front, the Black Sea fleet and the Caucasian Front. The emotional impact from the travel was very deep, and I brought a lot of sketches and drawings, some of which I used in one of my graduation paintings. The main sources I turned to for what I needed were the Hermitage, the Russian Museum, and exhibitions. In the Hermitage, three works enthralled me altogether: Titian’s ‘Venus with a Mirror’, Velasquez’s ‘Pope Innocent X’, and Rembrandt’s ‘Portrait of the Artist’s Mother’.

“These three pictures revealed the very essence of art in all its grandeur: the absorbing, precious deep hues, the richness and careful arrangement of the light and darks, and materiality. In addition to the Hermitage, I often visited the Russian Museum, where I familiarized myself with the foremost masters of our national art. My attention was captured by Ilya Repin’s ‘The Zaporozhean Cossacks Writing a Letter to the Turkish Sultan’, Vasily Surikov’s ‘Capture of the Snow Town’, and Nikolai Ghe’s paintings. Each of these pictures was anchored in the traditions of great European art and had a distinct national flavour. At nearly the same time the first posthumous exhibition of Valentin Serov opened. It was the first chance I had in my life to see so much of Serov’s oeuvre, and I was greatly impressed. In 1911 I first became introduced to the new French art at a show in St. Petersburg, where I was greatly stirred by the Impressionists Claude Monet and Pierre Auguste Renoir.”1

In November 1916 Kotov submitted two genre pictures to the St. Petersburg Academy of Arts competition (“A Letter Written in the Trenches”, “Preparing for Hunting”), and was awarded the title of artist and a four-year prize fellowship abroad. However, the painter never had the chance to leave Russia to travel to Italy, and he was in Astrakhan when the Bolshevik revolution broke out. Kotov became strongly involved with local community activities and, in 1918, as the chairman of the visual arts committee of the Astrakhan region trade unions, he handled the receipt of a gift to the city — a major collection of paintings from the collector Pavel Dogadin. Soon Kotov was elected chairman of the committee in charge of supervision of a local picture gallery and painting workshops within the Culture and Education Department. In 1919 he headed state-sponsored unaffiliated art workshops in Astrakhan, which were later reorganized into the Vlasov Art College.

Today the Astrakhan museum holds 17 works by Kotov, three of which have been in the museum’s possession since its foundation. In 1918 Pavel Dogadin bought at a show such paintings as “Ghelyung [Kalmyck priest]”, “Little Street in [the town of] Plyos”, and “Verochka”, about which the poet Velimir Khlebnikov wrote: “Kotov’s ‘Verochka’, sunlit and drowned in flowers, seems very promising”.2

His own recollections continue: “...In 1922 I was invited to Moscow to work as a visual artist at an agricultural show. It marked the beginning of my professional life as a fully-fledged artist. At the period Moscow painters were engaged in a bitter struggle — on one side there were Realist artists, who felt pride in the great accomplishments of the national culture and resurrected the old claim that creating a picture was the highest point of a great politically engaged art, and on the other, artists inspired by contemporary Western, mostly French, aestheticized art. To strengthen their position, the Realist artists organized an Association of Artists of Revolutionary Russia (AARR); I joined it too and became strongly involved with its creative activities. In 1931, after AARR was disbanded, I joined the Moscow Branch of the Artists’ Union (membership card № 3).”3

In 1925 the artist traveled to Turkestan. “In Central Asia I discovered many things as a painter. Like no other place I visited, it made me appreciate the charm of half-tones and reflexes, which enriched my palette immediately. I worked there for days on end on the streets and at the markets.”4 That travel brought about a series of important paintings such as “Bukhara Artisans”, “Bukhara Bride”, “Coppersmiths”, “A Market in Bukhara”, “Bukhara Jews”, “Portrait of a Woman in Ethnic Dress (A Baloch woman)”.

Presently the Tretyakov Gallery holds one of Kotov’s pieces made at that time — “Bukhara Artisans” (the 1920s), and a search at the Russian State Archive of Literature and Art found a reproduction of the painting “A Revolutionary from Turkestan Hadja-Mirbabes-Mir Mukheinov” with an inscription by the artist: “Acquired by the Tretyakov Gallery”. Interestingly, the appearance of one of the “Bukhara Artisans” greatly resembles the “revolutionary’s” portrait - one of the mysteries of the artist’s heritage.

In 1928-1938 Kotov traveled extensively to the biggest Soviet construction sites. He worked at Dneprostroi (the hydroelectric station on the Dnieper), Kuznetskstroi (a steel plant in Kuznetsk), the Magnitogorsk steel plant, the Krasnoe (Red) Sormovo shipyard, in the Donbass. At that period he created such pictures as “Dneprostroi in Daytime”, “Blast Furnace № 1 at Kuznetskstroi”, “Kuznetskstroi. Central Power Plant”, “Krasnoe Sormovo”, “Portrait of Semyon Timoshenko, Head of a Division of the 1st Cavalry Army”, “Portrait of a Hero of the Civil War Danilo Serdich”, and “Cavalry Alarm”.

“... For a Soviet stand at the World Fair in New York I created, on order from the government, a painting ‘Gardeners Visit Ivan Michurin’. I had done quite a lot of preparatory work for this picture. Completing the sketch, I visited Michurin’s gardens to do location work as a painter. The subject matter truly engrossed me. Elaborating the genre scene against the background of Michurin’s rich garden full of fruit and flooded with sunlight, I strove to use these specifics for attaining more luxurious visuals for my piece.”

After the end of World War II, on order from the Committee for Arts under the auspices of the Soviet government, Kotov created a series of portraits of prominent Soviet military leaders, including the Soviet marshals Georgy Zhukov, Konstantin Rokossovsky, and Ivan Bagramyan. Rokossovsky’s portrait has an unusual story behind it. It was well known that Rokossovsky loathed posing for artists; this made Kotov extremely anxious, and he told Zhukov about his apprehension. Zhukov gave him his direct phone number and promised to help to secure the consent of the uncooperative Rokossovsky. And Zhukov did help: when first approached by Kotov, Rokossovsky turned him down; the artist called Zhukov, who, without hanging up, got connected to Rokossovsky — and he consented! It is no one’s guess what one marshal told another, but the portrait was made.

According to a memoir by the artist’s daughter, Kotov was commissioned to portray Joseph Stalin. But instead of accepting the offer immediately and cheerfully, he inquired how many sittings he could count on. When told that it was impossible to meet with Stalin in person, the artist turned down the commission — a fact that says much about Kotov’s character, and left his family anxious about possible consequences.

Kotov’s portrait of the eminent chemist academician Nikolai Zelinsky (1947) won him a Stalin prize (it is now held at the Tretyakov Gallery).

Along with topical paintings and commissioned portraits, Pyotr Kotov throughout his life eagerly and affectionately portrayed members of his family in works that are marked by a special warmth and lyricism. The most noteworthy pieces include “Motherhood”, “Breakfast. My Family”, “In a Vacation Retreat. Alupka - Sarah”, “Portrait of My Daughter in Red”, “Portrait of My Wife”.

In 1949, when he taught in the Surikov Art School, he accepted an offer to head a battle-painting workshop at an art college in Kharkov. During a fairly short time there Pyotr Kotov helped towards graduation a whole host of now famous painters, including People’s Artists of the USSR and RSFSR such as Valentin Sidorov, Andrei Kurnakov, Yevgeny Danilevsky, Edouard Bragovsky, Alexander Fomkin, and People’s Artists of Ukraine Anatoly Nasedkin and Alexander Khmelnitsky.

The artist died in Moscow in 1953. Kotov’s name is perpetuated in the artist’s native land — the former village of Vladimirovka, now the city of Akhtubinsk in the Astrakhan region: it is given to a children’s art school. 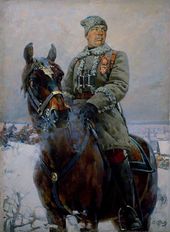 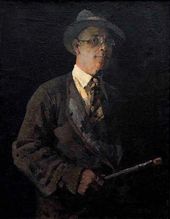 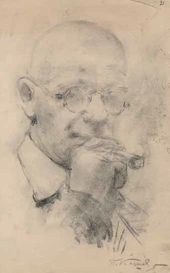 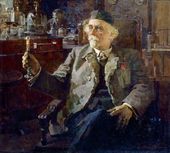 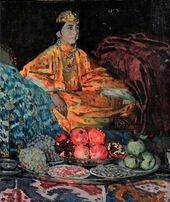 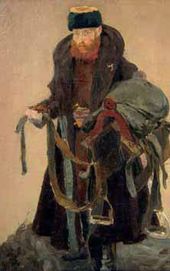 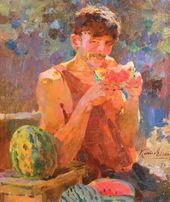 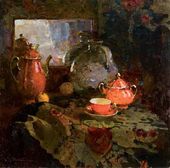 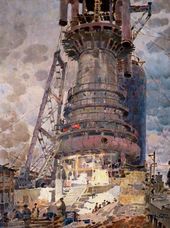 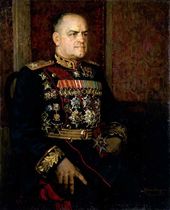 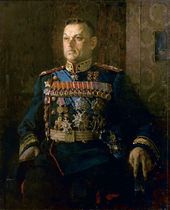