"We shall call him here...": Anna Golubkina and Sergei Konenkov

The exhibition “Golubkina. Konenkov. The Secrets of Mastery” opened last autumn in the Museum-studio of Anna Golubkina, the sculptor. It is quite clear that the journey from the idea to connect these two great masters to the actual exhibition dedicated to them both was not simple, but it was inevitable. Sooner or later these two “restless Muscovites”, as they were called in the Academy of Arts, were bound to meet not just in the classroom, or at exhibitions, or while visiting one another, but as the participants of one exhibition in particular - dedicated to both of them.

Nothing can bring out better their strength and the splendid disparity of their artistic manner, their worldview, their creative qualities and human likes and dislikes, than this unhurried dialogue. This conversation, not in words — effectively a mute dialogue between the two masters through their artworks — takes place as the viewer moves from one range of material to another.

Art critics recognized a long time ago the outstanding significance of Anna Golubkina and Sergei Konenkov in the development of the Russian plastic arts at the turn of the century, and for the whole culture of the so-called Silver Age. Their lives, so different from each other, were nevertheless similar in the amazingly high creative goals attained by the sculptors. In this sense, the closeness of their lives was already apparent during their apprenticeship. Alexei Svirin, the future assistant to Anna Golubkina, recalls: “Among the artists who visited the moulding workshop, the names of the young sculptors, Anna Golubkina and Sergei Konenkov, were mentioned more and more often. They were talked about as great future artists”.[1] The teachers’ expectations came true. Many decades later, after Golubkina had died, and Konenkov had found himself in far away countries, Mikhail Nesterov would confess: “Konenkov and she — here are two major figures.”[2]

It is interesting that the masters themselves recognized each other’s talent right away, and kept a mutual respect through until the end. Already during his apprenticeship, Konenkov’s most striking impressions were strongly connected with the personality of Golubkina: “Her works, cast in gypsum, stood in the workshop. They amazed me with their significance and unprecedented expressiveness of form.”[3] The recollections of her contemporaries confirm that the admiration they had experienced in their youth did not fade with the years. “Konenkov loved Anna Semyonovna very much and spoke of her with admiration,”[4] remembers Ivan Pavlovich, the brother of Svirin, the moulder who worked often with both masters. At the same time, Vasily Trofimov, Anna Semyonovna’s friend and the husband of one of her classmates, remarks: “Anna Semyonovna valued
Konenkov’s talent very highly. She called his talent huge.”[5]

Golubkina’s favorite student, Zinaida Klobukova, also could not help noticing this remarkable relationship. She pointed out that: “...in art, she [Anna Golubkina. — O.K.] highly regarded only Konenkov, only considering him equal to herself. She gave credit to the others, but really admired only Konenkov. Golubkina saw a genius in Konenkov and regarded him as such.”[6] We may refer to many such statements, but the most touching are the words of Vera Nikolaevna Golubkina, the niece of the sculptor and the first director of the Museum-workshop, who, already as a young girl, witnessed the two masters’ mutual affinity for one another: “Anna Semyonovna and the man whom we met rushed to each other and kissed each other. ‘Who was that?’, I asked, when we were alone. ‘That was Konenkov!’, answered Anna Semyonovna.”[7]

This same affinity and warmth is undoubtedly recognizable in their art works, placed next to each other. Their art has completely different internal and external qualities. It is not their comparison that is especially captivating — they are almost impossible to compare to each other — but the amazing opportunity to imagine the full scale of what the material is capable of, as you move from one master’s pieces to the other master’s creations, executed in stone and wood.

At the beginning of the 20th century the scupltors were among the first to return to the hard but so fruitful practice of the full mastery of the chosen technique. And each of them finds his or her unique way to work with wood and stone. Golubkina even considered necessary, while instructing her students, to describe Konenkov’s method as especially distinctive and unique: “Sergei Konenkov always works with the whole piece of wood, but he becomes so much part of it, that he works simply by freeing what is inside it”.[8] As for Konenkov, he left us truly heartfelt words: “What a sensitive being it is — art! One false moment, when you try to convey something you do not feel, and the sculptor’s fingers begin to lie, and the painter’s ‘strongest’ colours do not worry anybody anymore. But that did not happen in Golubkina’s life. I do not know a better teacher for young people, than her precise biography — not a word added, not a word taken away from her work — the biography of a great sculptor and dedicated revolutionary, Anna Semyonovna Golubkina [italics are mine. — O.K.]”.9

But, during their lives, these masters were connected not only by the joy of creative success. They were also saddened by what they considered to be each other’s misfortunes. Golubkina, who was older, was worried by the young Konenkov’s worldview, but during hard times she herself found emotional strength in his optimistic nature. A viewer soon begins to pick up from the mood of the exhibition what they might have given each other (in the creative sense, of course, because the very meaning of their relationship — emotional and formal, but never indifferent — was creative). And the lines from Zinaida Klobukova’s memoirs about Anna Golubkina become very clear: “In moments of doubt or great joy she used to say: ‘Let’s go to Konenkov’, or: ‘We shall call him here.’ 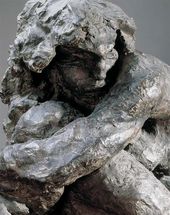 Exposition of the exhibition “Golubkina. Konenkov. The Secrets of Mastery”

Exposition of the exhibition “Golubkina. Konenkov. The Secrets of Mastery” 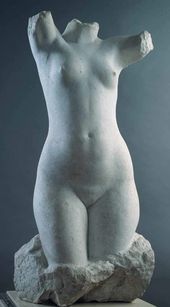 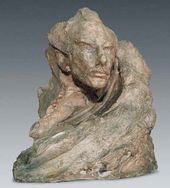 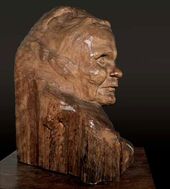 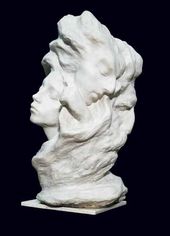