Nelson White: A Life between the Tuscan and American Landscape

With the elegant courtesy of his native New England, Nelson White welcomes me to his studio space at the Florence Academy. Seascapes hang from the partitions. On the main easel, a portrait is a work in progress. But there’s little room to sit down and talk, so we withdraw to a table in the library. Around us, FA students browse through its rich collection of art books.

Speaking in the soft clear tones of the North East coast of the United States, Nelson, now in his 70s, talks of his early apprenticeship as an artist and comments on his work today. On weekdays at the FA, he concentrates mainly on portrait and figure painting. But his passion and his forte lie in landscape painting, to which he was initiated as a boy by his father and grandfather. Come Friday noon, he leaves his studio, most often for the coast to paint seascopes. At other times, he spends weekends at Torre del Lago, the one-time residence of Puccini, where he paints the lake that he first discovered on landscape painting trips with Pietro Annigoni. When it’s raining he paints from his car, and when it’s really cold he rents a hotel room and paints from the window. During the winter he also works on retouching some of his landscapes, concentrating on developing the visual effect of the sky or a cluster of clouds. Mostly, he works alla prima. Now, however, he is challenging himself by trying to concentrate on large paintings which require more sittings.

Nelson has certainly had a full training as an artist. His grandfather, Henry Cooke White, was one of a group of established North American artists who painted at Old Lyme, Connecticut, at the turn of the 20th century. Nelson’s father, Nelson Cooke White, followed in his footsteps. As a result, the younger Nelson — whose middle name is Holbrook — spent his childhood and teenage years with the likes of Irving R. Wiles, a pupil of Carolus-Duran and Leon Bonnat, and Will Howe Foote. From them, he learned the importance of tone and values in painting, and above all, he stresses, taste. He recalls for instance a visit to the painter Edward Rook at his home in Old Lyme, where he was struck by the beautiful rugs hanging in what appeared to him an unusual fashion on the walls and from furniture — too precious to be stepped on.

Nelson’s grandfather had trained at the Art Students League of New York and with Dwight W. Tryon. He it was who guided the aspiring young artist in the basic steps of painting, starting with castdrawing and other exercises. His father, by contrast, was the aesthetic guide, eloquently explaining issues of taste and philosophy and drumming into his son the importance of half-tones and of grandeur in relationships central to a beautiful landscape, such as that between sky and sea. Nelson’s grandfather transmitted to Nelson his passion of sailing and the sea, and many a holiday or weekend was spent on Long Island Sound. Recurring themes in his paintings are views of the shore and all the paraphernalia of sea-lovers.

It was in 1955, on a trip to Italy with his father, that Nelson discovered Annigoni. In a bookshop in Florence, they came across a book about his work. Soon afterwards, Nelson decided to return to Florence to study under him. But Annigoni refused to be paid as a teacher, affirming that he was too busy with commissions to dedicate time to regularly looking after students. Instead, he proposed to Nelson and a handful of other young art students that they come from time to time to his studio, where they could work on personal projects and he could give them a critique. For proper lessons, he advised them to go to Nerina Simi, whose renowned school was a few streets away.

And so during the following years, Nelson benefited from Simi’s teaching, learning the fundamentals of realistic painting and regularly visiting Annigoni to gain more knowledge of the essentials of the art. Simi’s way of teaching was similar to the Florence Academy’s, though she used the method of comparative proportions rather than sight-size. Today, Nelson appreciates the way in which Simi drilled her principles in drawing and painting into her pupils. But he also acknowledges his indebtedness to Annigoni for his acute insights.

“He wasn’t a born teacher,” Nelson recalls, “but rather, so to say, a guide and a coach. He had high standards. He could see when your work was losing gut, losing emotion. He would just tell you to try a different subject.”

Through such powerful experiences, the two became good friends. Nelson helped Annigoni by taking photographs of his work for cataloguing. Together, they often went landscaping, to Torre del Lago or to the marshes of Ponte Buggianese, another favourite haunt. In this way, thanks to Annigoni, Nelson discovered the rich and varied beauty of the Italian countryside. Soon, he was exhibiting both in the US and in Italy, often with galleries introduced to him by Annigoni, such as in La Spezia and Cremona.

Over the years, Nelson made Florence his second home, dividing his time between work there and regular trips to the US. He met Daniel Graves at Simi’s when Dan was undertaking his own studies. Annigoni spoke well of Dan, so when Dan asked Nelson to serve on the board of the school that he was setting up, Nelson instantly accepted. By now an accomplished painter, he knew there is always more to learn and room to improve. Taking up a studio at the FA, he set about learning the method of sight-size, a technique that he acknowledges has contributed to his career by helping him in his drawing and improving his landscape painting. “The quality of my work is higher, and this inevitably appeals more to galleries,” he says. The technique has given him the confidence to take on more ambitious subjects, including exploring further the art of portraiture.

What prospects, I ask, does Nelson see for realist art today? As far as his own experience was concerned, says Nelson, presenting himself as a realist painter has not been an issue. He has been helped both by his personal background and by the support of notable galleries throughout the US. Looking back, nonetheless, he agrees that it is striking how painters such as Annigoni and Andrew Wyeth, despite being recognized as extraordinarily talented and high quality artists, suffered for not being in the mainstream. While they had success in what they did, they were also criticized for what they were and could feel extremely isolated. And yet both of them now have museums of their own, Annigoni in Florence at the Villa Bardini, and Wyeth in the Brandywine River museum in Pennsylvania.

These are signs that realism is slowly becoming appreciated once again. Last year, for example, a show of realist art was organized in Florence by an etching professor of the Accademia delle Belle Arte. “I would never have thought this could be possible in Florence, especially coming from the Accademia, renowned for having gone more expressionist,” Nelson comments. “Things come in unexpected ways.” 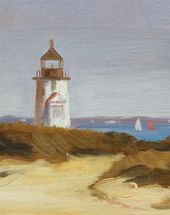 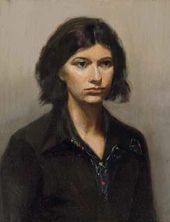