The Determinism of Oleg Savostiuk

The eye-catching theatre poster is the key genre of the renowned Russian painter Oleg Savostiuk whose solo-show opened at the Russian Academy of Arts in February 2009. The bright talent of Oleg Savostiuk reveals itself in the theatre posters for the Bolshoi Theatre operas and ballets such as “Ballade of a Hussar”, “War and Pace”, “Swan Lake”, “Nutcracker”, “Ivan the Terrible”, “The Seagull” and “The Golden Age”.

Determinism is a doctrine that holds that the will is shaped by internal psychological factors and external circumstances, but is devoid of so-called “free will”. I think that the artist’s work, his very existence, is determined — the artist serves these two ideas: determinism and free will. What matters, of course, are the ends to which these ideas are put: does the artist direct them to the general good, or does he use them selfishly?

For many years, the artist Oleg Mikhailovich Savostiuk worked faithfully in the genre of the Soviet political poster, which is so heartily maligned today. He tried to maintain the poster’s sharp graphic expression, its plastic and artistic understanding of his ideas, mostly worthy and noble, but which were transformed into the abnormal Soviet reality, encountering absurd obstacles on the way. He managed to preserve the poster workshop in the Surikov Art Academy, and now this workshop produces — or should be producing — artists of expressive and acute plastic mentality.

Oleg Savostiuk teaches according to his teacher Mikhail Cheremnykh’s legacy. He teaches to create new forms in art. It seems that he himself escaped into painting; every year he has exhibitions of his new works at the Academy. We are longtime friends, and I used to think that he had moved on to a seemingly conflict-free existence. But recently the Central House of Artists hosted an exhibition of his theatre posters for touring ballet performances (most of them directed by Yury Grigorovich). The show astounded me. There were more than 30 posters, and that was only half of the number he had created.

It would seem that posters and playbills of ballet performances would be something delicately faded, elegantly inexpressive, dull in colour. But here the walls were covered by blindingly bright posters, mostly in pure flat colour, with astonishingly beautiful, festive white paper, which took an equal part in each composition, with typeface that expressively played its part in each poster. Savostiuk’s typeface is light and spontaneous, by no means drafted. The letters elegantly perform their dance. Why do our artists consider it unnecessary to draw typeface? This is also one of the methods of conveying the idea of a poster, a book, or an image.

One may think that the laconic colours of Savostiuk’s posters are fraught with inevitable monotony, but far from it — the arabesque of every playbill is inimitable and individual, unexpected and special. They are seldom three-dimensional. Everything is happening on the white plane; each element adorns and sets the others off, and at the same time the image is amazingly imaginative in its plot, text and musical nature. What is it, graphic art or painting? A light elegy or a scientific treatise?

I recently taught typeface at Savostiuk’s invitation at his Graphic Department and learned, to the best of my understanding, the possibilities of the form. I have even written a book — a textbook called “The Drawn Typeface”. Typeface is really very eloquent and it may tell a lot by itself, but all of its environment, all that surrounds it, may make it very expressive as well.

Every poster by Savostiuk is a festival, whether solemn or carnivalesque in nature, refined or folksy, sad or merry, comical or even tragic, witty and noble, and sometimes all of the above. It is both a beautiful spot on the wall, “shooting” already from far away, and an object of reflection that expresses the idea of a play. I have never seen such intelligent, eloquent billboards. It seems to me that this is an expression of the plastic ideas of suprematism, freely executed by a very talented artist — an acute composition, with all its elements in perfect balance, seemingly light and spontaneous execution, authentic artistry, a united cadence of all components of this festival. I don’t think the West has seen anything like it. It is truly a high ballet of fine arts.

People’s Artist of Russia, member of the Academy of Arts, professor, head of the graphic department of the Surikov Art Academy — such a listing of all his titles could continue — Oleg Savostiuk has presented this spectacle to the West, and opened it up for us as well. It seems to me that these works are a worthy manifestation of the might of modern Russian Art. 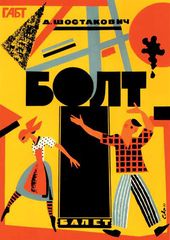 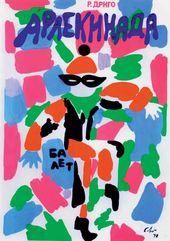 Theatre poster for the ballet Harlequin by Riccardo Drigo 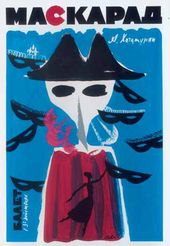 Theatre poster for the ballet Masquerade by Aram Khachaturyan 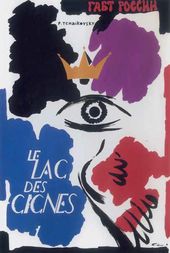 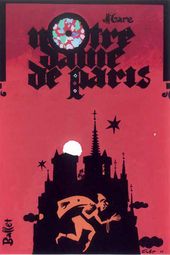 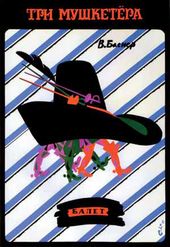 Theatre poster for the ballet The Three Musketeers by Veniamin Basner